The Toraño Family Cigar Company is once again dipping into the family vault as they prepare to release a new addition to their Vault line, as the the Toraño Vault D-042 is currently being readied for debut at the IPCPR Convention and Trade Show in mid-July, with arrival at retail in August or September of 2013.

The new cigar comes from a project started in 2004, though its roots go back further than that. In 1998, Carlos and Charlie Toraño visited a tobacco farm in Pennsylvania, and having become enamored with the tobacco set out on how to figure out if it could be used as a wrapper. The project stalled because of burn issues, so the father and son tried it as a filler.  As other projects came up, the project found itself relegated to the archives in the infamous blend book.

Having gone back to the blend book to look for inspiration, the D-042 blend has been brought back to life, this time with an Ecuadoran Habano wrapper, Nicaraguan filler and a blend of Nicaraguan and Pennsylvania filler.  Jack Toraño, the company’s marketing and public relations director, describes the cigar as “really strong with a sweet spice, definitely one of our stronger cigars.” 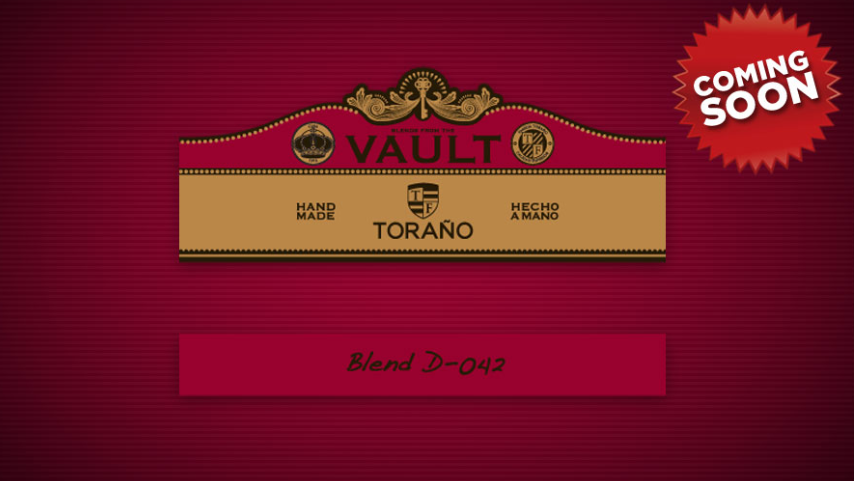 This latest “Blend from the Vault” combines select Central American tobaccos, but with an unusual addition. According to President Charlie Toraño, “My father and I discovered a rare Pennsylvania leaf, while on a 1998 tobacco trip. Extensive experimentation revealed it to be an excellent enhancement to the filler tobaccos in Blend D-042, which we recorded in the blend book in 2004. The Pennsylvania tobacco’s flavor perfectly balanced the Nicaraguan filler combination. The original blend had a Sumatra Ecuadorian wrapper which was a popular choice at the time and widely available. In making some small adjustments to the original blend, we added a Habano Ecuadorian wrapper and the result was impressive. Blend D-042 is a powerful smoke, but with long and lingering sweet spice notes, it is very rounded and flavorful. It’s a fitting addition to our Vault line, complementing our runaway top-seller and widely distributed Vault Blend A-008.”

In 1982, the Toraño Family started a “blend book” which meticulously documents the company’s creation and refinement of all their unique blends. As Toraño relates, “Our experience in tobacco, as recorded in the blend book, is our past, present and future in the world of exceptional premium cigars. Thus, the book has been securely sequestered in a bank’s safe-deposit box. Not all our blend recipes are worthy to take to market, but they are still considered special to us and irreplaceable. In the case of the D-042 blend, the recipe lay dormant since 2004 until now, before coming to life with the addition of the Habano wrapper from Ecuador which was not readily available back then.”

Vault D-042 is presented in cedar-lined boxes of 20 cigars, with the exception of the 6″ x 60 BFC, which comes in boxes of 18. The Vault boxes are made to look like the safe-deposit box which secures the Toraño blend book. The new Vault’s distinctive metallic red and gold bands are accompanied by a “Blend D-042″ in the footer band to set it apart from the original Vault blend A-008.