It’s been a while since we did a trademark search… today is a lot more than a trademark search. Today is about what is undoubtedly one of the largest lawsuits ever to rock the industry. It involves El Rey de los Habanos Inc., the company most know as José “Pepín” García’s first company, the García family, My Father Cigars Inc., and a man few rarely hear of, Eduardo Antonio Fernandez. 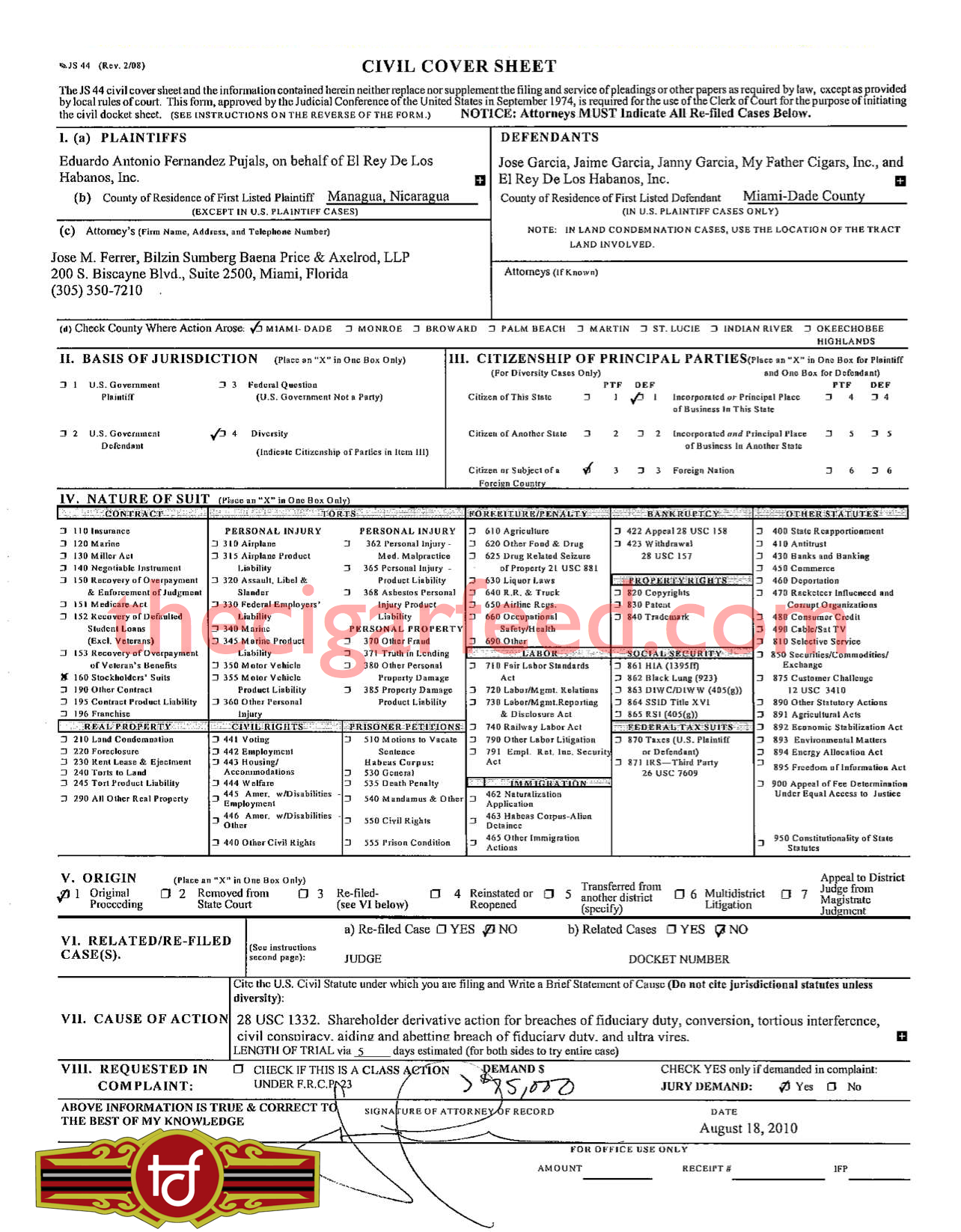 The Complaint
I’m not sure where to start, but I guess with the lawsuit proper. Eduardo Antonio Fernandez Pujals filed a civil complaint with the U.S. District for the Southern District of Florida on August 18, 2010, a week after last year’s IPCPR show. The complaint alleges:

For those of you who know who Eduardo Fernandez is, you know him as the owner of AGANORSA, the Nicaraguan tobacco growing company, as well as for Tabacalera Tropical (also now known as Casa Fernandez). A 2003 Smoke Magazine profile reads:

Eduardo Fernandez, a former New York financier and self-made entrepreneur who created one of Europe’s most successful fast foot chains, started in the cigar business on the agricultural side, having acted upon an opportunity to acquire tobacco farming lands in Condega and Jalapa that had belonged to the post Sandinista-era farming cooperatives. Having land but lacking expert staff, the highly-charged and rapid-speaking Fernandez brought in retired wrapper leaf growers and fermentation experts from Cuba in an effort to “do something special” with the fertile tobacco lands. As president and owner of AGANORSA, he oversees production of 10,000 bales of cigar tobacco annually.

And then there is the other role of Eduardo Fernandez, the role that no one likes to talk about, his involvement in El Rey de los Habanos. The lawsuit alleges, amongst other things, that when the García family (José “Pepín” García, his son Jaime and daughter Janny) created My Father Cigars Inc. in 2008, they stole trademarks, clients and more so business from El Rey de los Habanos.

The Start
In various documents obtained, the lawsuit sheds light on parts of the Pepín narrative that we rarely hear of. It describes how Pepín was once working at Tropical and how El Rey de los Habanos was formed. In the complaint, Fernandez alleges that he and Pepín started El Rey de los Habanos in December of 2002 with Fernandez fronting all of the capital and later contributing more including his Nicaraguan factory for the formation of Tabacalera Cubana S.A. in 2006, another partnership between Pepín and Fernandez, also currently in a court of law. Also included is the partnership details regarding El Rey de los Habanos, which according to the lawsuit breakdown as:

In a Cigar Aficionado article published less than three weeks before the lawsuit was filed, Janny García acknowledged Fernandez as a partner, although not clarifying the extent and then said, “We prefer to not talk anything about Eduardo Fernandez… In my consideration, it’s not necessary.”

El Rey de los Habanos was the place that began the Pepín craze. The small Miami factory employs a dozen highly-skilled rollers to turnout products for Pepín, Pete Johnson’s Tatuaje, (at one point) Ernesto Padilla and a few others. By 2006 demand had far exceeded the small rolling room and Pepín went to Nicaragua, where the aforementioned TACUBA was created. Eduardo Fernandez told David Savona in regards to the My Father Cigars factory, “all of a sudden he built another factory that’s all his…” Today, My Father Cigars through the García Family Industrial Park in Estelí (which houses My Father Cigars S.A., the My Father Cigars factory) handles most of the production for Pepín, his brands and the numerous other brands that he rolls, most notably Tatuaje.

The most recent action in the lawsuit were rulings on some recent motions, which you can read here. According to other documents, the sides have attempted settlement, but were unable to reach any agreement. An October 12th Joint Conference indicates that discovery is supposed to be completed by August 3rd and a trial is set to begin on November 7th, 2011, but this is the legal system, things get delayed. One perhaps interesting side-note is the dissolution of TACUBA in Nicaragua, described in court documents as:

Defendants believe there will be unique legal or factual aspects of the case that will require special consideration by the Court including jurisdictional issues and questions of lack of subject matter jurisdiction. Specifically, many of the claims asserted by Plaintiff relate to business opportunities belonging to a foreign Corporation, Tacuba SA, owned entirely by Fernandez and García. Tacuba, SA is a Nicaraguan Corporation in the midst of corporation dissolution being handled exclusively by the Court’s of Nicaragua. Ultimately, Plaintiff will be required to seek Tacuba, SA’s involvement in this matter and will be unable to do so both because of jurisdictional issues and lack of subject matter. Further, Plaintiff’s claims will also require the participation of a separate Nicaraguan company, My Father, SA which will face similar jurisdictional issues and questions concerning lack of subject matter.

You may see the $75,000 figure on the image above, that’s not the actual amount that is being sued for, rather, my understanding is that is a minimum figure needed for the court to handle this type of case.

The Implications
I am not an attorney. I am not going to speculate what might happen in the courtroom or at a conference table. However, for the cigar industry this is two of the industry’s largest players going at it in a court of law, and that does mean something. The interconnectedness of the industry means that Rocky Patel (through its stake in EO Brands/United Tobacco); Miami Cigar & Co. (through the Nestor Miranda Collection); Ashton/Holt’s (through San Cristobal, La Aroma de Cuba and a few others) and Tatuaje have already been dragged into it, and the list of potential Pepín clients goes on.

(Under A. Mountain gets credit for the thumbnail)