On Tuesday afternoon, Pete Johnson of Tatuaje sent out two pictures of the new Tatuaje Apocalypse, the second edition of a store exclusive cigar for Smoke Inn in south Florida. 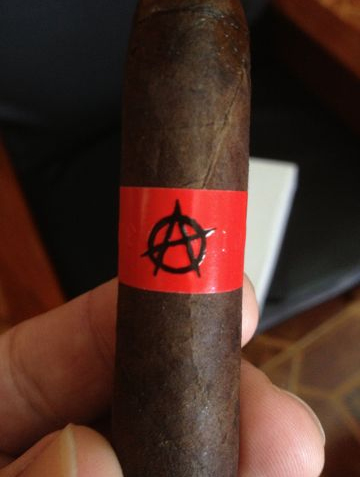 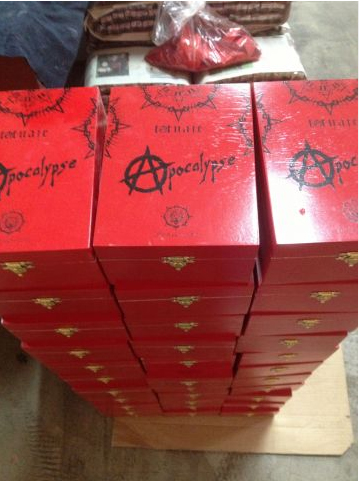 While the Tatuaje Apocalypse features the same color scheme as the original Anarchy, the colors have been reversed, with a black anarchist symbol on a red background, and red boxes with black text. The Anarchy featured red text on black bands and black boxes.

Like the Anarchy, the Tatuaje Apocalypse is being made at My Father Cigars in Esteli, Nicaragua. Blend information, size, pricing and quantity produced has not been released yet. The Anarchy used an Ecuadorian Habano wrapper over Nicaraguan binder and filler to create a 6 x 54 Salomon vitola. Approximately 1,000 boxes of 15 cigars were made, with a single stick price of $9.99.

News of the release was confirmed back in April, when a relaunched Tatuaje Anarchy website went live and announced that the release date of the new cigar would be December 14, 2012. According to the site, the party falls a week before the the conclusion of the 13th b’ak’tun, a time period in the Mesoamerican Long Count calendar which was used in Central America prior to the arrival of Europeans. It is believed that Armageddon would overtake the peoples of the world and all creation on this date, which falls on December 21, 2012.

In early September, a tweet came out from the @TatuajeAnarchy account with a link to a YouTube video with highlights from the Tatuaje Anarchy release party in 2010, and reiterating that the release party for the Tatuaje Apocalypse would be on December 14.

The Tatuaje Anarchy was reviewed here in November 2010.