FX’s motorcycle outlaw drama Sons of Anarchy will be getting an official cigar later this month through Meier & Dutch’s Black Crown brand. The Black Crown Sons of Anarchy Edition will debut in late August, shortly before the show returns to television. Sources told halfwheel there will be five vitolas produced at General Cigar’s HATSA factory in Danlí, Honduras packaged in boxes of 20.

Sons of Anarchy, a show that features plenty of cigar smoking, is entering its penultimate sixth season, which will debut on September 10. 20th Century Fox has made Black Crown the official brand of Sons of Anarchy, although whether or not the cigar makes an onscreen appearance remains to be seen. This is far from the first time a television show and a cigar have partnered. CAO made cigars for HBO’s The Sopranos, a line that was just discontinued earlier this year. Ted’s has partnered with Duck Commander, the star of A&E’s Duck Dynasty. 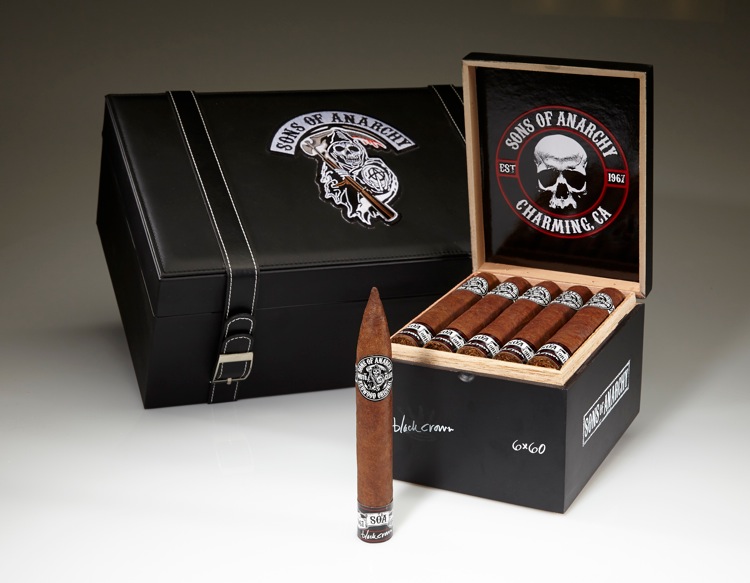 In addition to the cigars, Meier & Dutch has a full line of accessories planned. There’s a leather humidor featured in the picture above, a cutter, a three-finger leather case, pewter ashtray and a second humidor all scheduled to arrive in time for the holiday season.

Elsewhere, there has been internal discussions about a limited edition cigar, which would be made at Raíces Cubanas—the Honduran factory responsible for the original Black Crown line—although there are no formal plans for the release at this time. Meier & Dutch is expected to make a “heavy” promotion for the Sons of Anarchy line in retail brick and mortar shops.