Room101 Cigars formally revealed the details of the new Master Collection One on Monday, less than a week ahead of the 2013 IPCPR Convention and Trade Show in Las Vegas, Nev. where the cigars will be formally unveiled.

New of this new line began to circulate in February and was described as “the most premium Room101 offering to date” by Dylan Austin, Head of Marketing for Room101. Some early samples had been seen at Smoke Inn’s The Great Smoke event, though the cigars were not final blends and were not intended for public consumption.

The new line will be available in five sizes: A total of 4,400 boxes will be produced, with the Roxxo, Mutante, Sucio and Monstro versions all getting 1,000 boxes. There will be 400 boxes of the Papi Chulo vitola produced. Because of the varying box counts, each size will have 20,000 cigars made for a total run of 100,000 cigars.

A product brochure tells more about the history of the cigar and the use of the cherry blossom image: 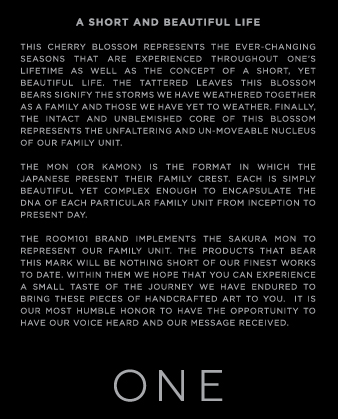 The Room101 Master Collection One will be available for pre-order during the trade show, with shipping slated to begin in early to mid-October.

Master Collection Two is slated to be launched later in the Fall of 2013, estimated to start shipping in late-November. Specific details about that line have not been made available yet.