One of the world’s largest manufacturers of premium cigars is entering the pipe business in a move inspired a lot by looking at its early roots. For the past year and a half Michael Cellucci, president of Drew Estate, has been working on pipe tobacco blends for the company, the first eight of which will debut at the IPCPR trade show and convention beginning this Sunday.

“Mike was smoking pipe tobacco back when he started with the company 13 years ago,” said Jonathan Drew, chairman of Drew Estate. Since then, the company has grown and so has its legion of pipe smokers.

“A lot of the guys here have been smoking pipes lately,” said Cellucci. “We have basic blends and blend some of our own versions.”

The eight lines are part of what’s known as Drew Estate Classic, the first time the company has used its name so prominently in one of its brands. The lines were blended by Cellucci and are being made in Denmark.

Six of the eight are aromatics with the Guilded Age Reserve, a pressed navy flake, and the Cavendish being the exceptions. The 50 gram (1.75 ounce) cans will begin shipping September 1 with an MSRP of $11.99.

Unlike the company’s partnership for ACID Shisha, Drew Estate will be handling the distribution of its pipe tobacco, and Drew Estate Classic is just the start.

Cellucci said more “exotic” blends are in the works, but that it was important to start on the traditional side of things so that the company could establish itself quicker with pipe smokers than it did with cigars. Jonathan Drew and others will admit that it wasn’t until the introduction of Liga Privada, first in 2006 and formally in 2007, that the company really gained legitimacy in the traditional premium cigar market, something Drew Estate learned from and hopes to avoid as they enter the pipe category. The packaging not only reflects the more traditional approach, but also the company’s past.

“When I started with the company, we were there,” said Cellucci, referring to Brooklyn. “The Brooklyn Bridge is something I always associate with our company.” Normally, the company uses a picture of the Manhattan Bridge in its marketing, but for Drew Estate Classic, it went with a different landmark.

“It made more sense to go with the Brooklyn Bridge, it told the story a little better.”

In addition to more blends in the future, the company will be hosting pipe events at select retailers and Cellucci even said he will be at a “handful” of them, although admitted his duties as president would limit him to only a few. In addition, the company is in the early stages of creating its own pipes, although Cellucci and Drew wouldn’t elaborate much further on the topic.

Drew Estate is far from the first cigar company to enter the pipe market, Ashton, Davidoff and others all have pipe blends under their names. 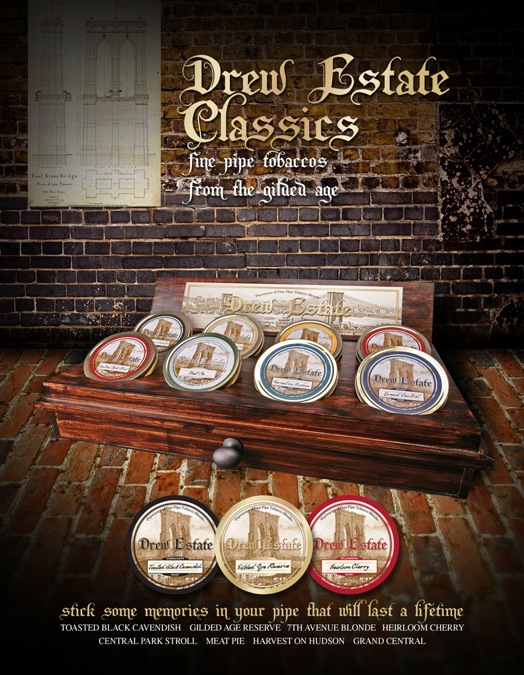