Famed humidor maker Daniel Marshall is set to release a special version of his DM2 Gold line, wrapped in gold. Next week, Marshall will begin shipping a limited edition humidor containing five 6 1/4 x 54 Torpedos wrapped in gold  in honor of his company’s 30th anniversary. As far as the cigar goes, it’s a Nicaraguan puro blended with the help of Manuel “Manolo” Quesada made by Plasencia that features: a five-year old wrapper, binder from Estelí and Jalapa fillers. 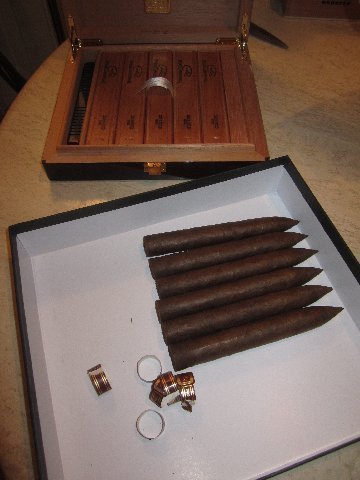 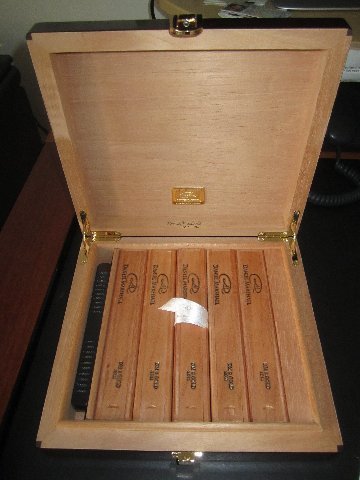 But that’s probably not what most people are interested in.

Each cigar is being wrapped in a sheet of 24kt gold before being packed in its own coffin. Says Marshall:

I carefully sand each cigar with ultra find sand paper to make the surface smooth as possible of the tobacco wrapper.They I apply the paper thin italian gold with a 100 percent natural binder. To cover the Torpedo to my satisfaction, i use a total of  25 sheets of 24kt pure  Italian gold leaf from the most famous gold leaf maker since 1820, to each cigar. The cost of the gold on the cigar is $75. As for how the idea came about:

When I was designing for Universal Studios the SCARFACE Humidor I was asked by Universal to design (an) ultra bling luxury version of the humidor. This special version of 20 will have  red and clear Swarovski crystal set into the bronze, Tony Montana medallion on the top of the humidor and the iconic words, THE WORLD IS YOURS will be set in red and clear Swarovski crystal. I thought that a “over the top” humidor deserves (an) “over the top” DM Cigar and the 24kt Gold DM2 cigar was conceived. One of these cigars will come with each of the humidors. When we launched the SCARFACE Humidor at (IPCPR), we displayed the gold cigar in a glass done and were asked if it can be purchased separately from the humidor. Designers from other top cigar brands came by our display and one of them declared the DM2 Gold Torpedo – “a stroke of genius”. We sold 5 of the gold cigars at $200 at this show, one of the DM2 Gold cigars going to Israel where the owner has it on display in the window of his shop in Tel Aviv. 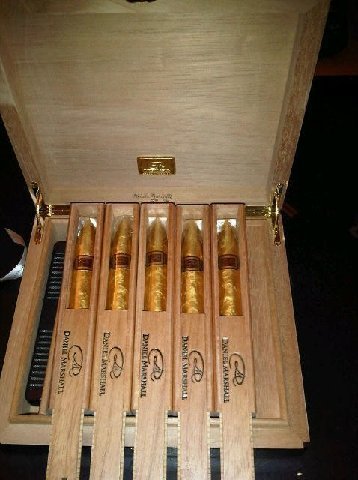 The cigars are available in their own coffins, which are packed in a five count travel humidor made from precious burl. Each DM2 Gold humidor retails for $1,000.00 and Marshall claims the humidor has a value of $250.00 alone. The humidors are numbered out of 50, making the release size a relatively tiny 250 cigars.

For those wondering, you are intended to actually smoke the cigar with the gold still on it according to the company.