Camacho is rebranding itself. The Honduran brand is hosting a series of events, beginning in the Dallas market, to introduce consumers to the new Camacho. Everything has been repackaged, price points have been lowered and at least four blends have already changed.

The company’s popular Corojo and Diploma lines have been tweaked to taste more like the original releases according to multiple Dallas-based retailers hosting events who were briefed by Camacho. In addition, internal sale sheets obtained by halfwheel indicate the Corojo Maduro and Criollo lines are similarly “new blends.” Corojo is now priced between $6.50 and $8.00 with all cigars coming in boxes of 20, except for the 5 x 50 Robusto Tubos which come in a box of 10. Previously Camacho referred to this size as the Monarca and offered it in tubos. The Corojo Maduro has an identical price range, although the Tubos are not offered. Both cigars feature red branding, with Corojo Maduro being slightly darker. Diploma is now priced between $10.50 and $12.50 with new purple branding and double bands. Packaging is only offered in 10-count boxes. It is the most expensive regular production line in Camacho’s new portfolio. 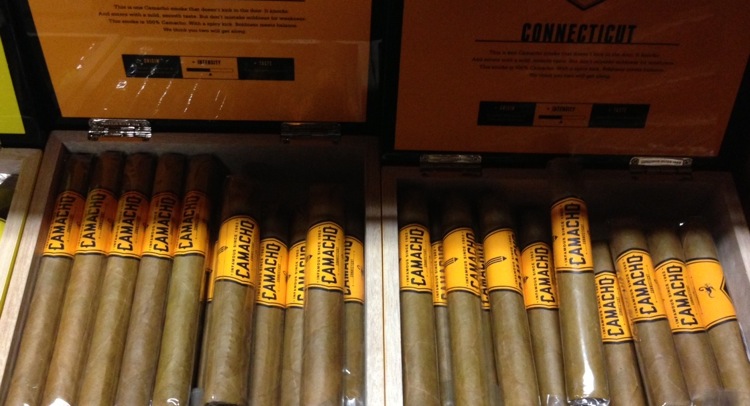 Camacho Criollo is now yellow with pricing between $5.50 and $7.00. Like Corojo, Camacho Criollo is offered in 20-count boxes except for the Tubos, which are sold in boxes of 10. Camacho’s Connecticut also shares the same packaging arrangement. Pricing for the now orange/mustard-banded cigars is set between $6.50 and $8.00. The Criollo and Connecticut are described as the least “intense” cigars according to the internal documents.

The Connecticut, Corojo, and Criollo lines are all expected to be offered in four-packs shortly. Camacho introduced the four-packs last April. For Camacho’s Triple Maduro line, the new bands keep the black and silver them that the company has used since the line’s introduction. Pricing is now between $8.50 and $10.50.

The new pricing is said to be slightly lower across the board than before. Retailers told halfwheel customers will see a reduction in price for most cigars at less than a dollar. The changes are part of what appears to be a complete reintroduction campaign for the brand. Currently, the Camacho website currently features a massive countdown clock with a target date of June 21. On June 20, the company is set to host the Bold Standard Launch Party at Lofty Spaces in Dallas. Actor Rob Weiss is to join Room101’s Matt Booth and former football coach Mike Ditka, the latter two of which have brands associated with Camacho/Oettinger Davidoff Group. Weiss was previously mentioned on the company’s Facebook page.

Dallas retailer Up In Smoke tweeted the following photo of its event: Retailers told halfwheel they were a bit taken back by the investment Camacho is making, particularly given it is hosting multiple events in the same market in essentially the same week. Posters at Dallas retailers indicate the events will have, “small batch bourbon, bold food, craft beer, hot girls, and killer smokes.”

Despite the massive rebranding, Camacho has remained publicly mum. The company has not shown off its new packaging on any of its social media platforms, only mentioning the events with pictures of the new branding noticeably absent. Multiple requests for comment from Camacho representatives for this story have gone unanswered.