Barry Stein had two dreams for the cigar industry. The first was to work in the industry, which he does as Assistant Director of Marketing for Miami Cigar & Co., the second—which will come true later this year—was to blend and sell his own cigar. Stein’s blend, KILO, will debut this August at the 2013 Chattanooga Tweet-Up in a single 5 x 50 Robusto vitola.

The project came about earlier this year when the once blogger spent time in the Dominican Republic at La Aurora’s E. León Jimenes Tabacalera factory learning about tobaccos as part of a crash course in manufacturing education requested at the hands of Jason Wood, vp of Miami Cigar & Co.

“I spent a few days with Manuel Inoa where I learned about the fermentation of tobacco, and how it is categorized for use,” said Stein. “I wound up rolling 40 cigars myself during the trip, with La Aurora rolling me another 40. Eight blends in total.” 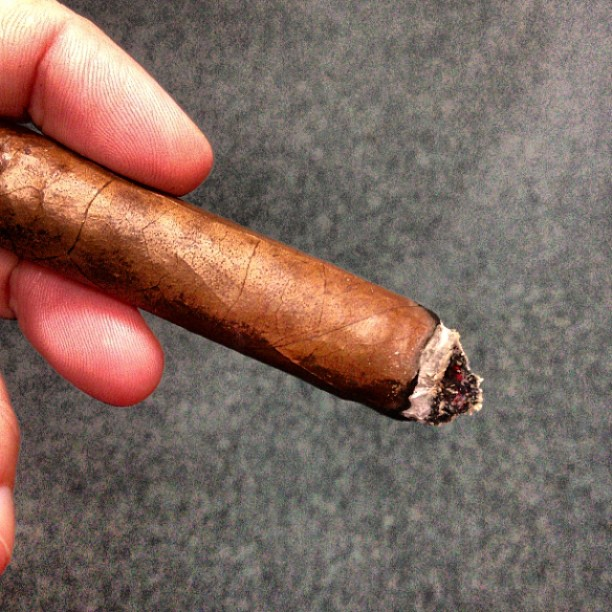 After a few months of aging, Stein grew fond of one of the blends, but his enthusiasm was not necessarily matched within the company.

“I couldn’t get Nestor Miranda, Hector Paz, or Jason Wood to smoke one,” said Stein. “So I took a few of them to a cigar shop I spend time out here in Miami and at the end of the tasting everyone was asking me for more.”

He describes the blend as “strong” and consisting “mostly of ligero tobacco.” KILO uses an Ecuadorian Sumatra wrapper, a Cameroon binder and fillers from the Dominican Republic, Nicaragua and the U.S. Pricing is set at $8.00 per cigar, which will be sold in four-packs at $32.00 per unit.

As for the name, Stein told halfwheel it paid tribute to his new Miami, and some of its darker days.

Wood told halfwheel that he agreed to use the Chattanooga event as a second test for Stein’s cigar and said the company would use the feedback to determine if more will be made available for sale.

The Chattanooga Tweet-Up is a joint project between David Jones of Tiki Bar Online and Burns Tobacconist in Chattanooga, Tenn. This year’s event runs from Aug. 1-3.

“I’ve known Barry for almost four years,” said Jones. “We butted heads at first, but quickly grew to become close friends. I am very proud that his first blend will make its debut to the cigar-buying public at our event.”

This is the third cigar Miami Cigar & Co. has brought specially for a Twitter-themed event. Last year’s Chattanooga Tweet-Up saw the company bring a special box-pressed Churchill in the Añoranzas blend, while the La Aurora 107 Puro Vintage debuted at the 2011 Atlanta Tweet-Up.