When I was in college I had a problem. I had spent a fair bit of money on cigars, it was spring and the central air conditioning wasn’t keeping my dorm room below 74 degrees, a temperature at the edge of  the temperature range where tobacco beetles become a threat.

At the time, I began to explore solutions and found the most popular one on cigar forums was to take a 28-bottle wine cooler, add some silicone-treated beads, try to seal some parts of the unit and then place my cigars in there. There were companies like Chasidor making custom shelves out of all sorts of woods, Heartfelt to provide the beads, and battery powered fans from Off!, yes the bug spray company, to help air circulation.

I spent nearly $1,000 trying to make my wine cooler work while fighting the Texas summer heat. It ultimately didn’t really work for me. While others had success, wine coolers weren’t really made to keep humidity in, particularly high humidity levels. The cooling units themselves sucked out humidity, which meant that it was a constant fight between the temperature and the relative humidity, the latter of which lost.

Eventually, some of the companies that were making wine coolers realized that there was a market for their products in the cigars world, and those companies began to sell units marketed towards cigar smokers. While the solutions don’t feature the zebra wood shelves that I had from Chasidor, they are regarded as being much easier to operate, as they are intended to hold humidity right out of the box.

This style of humidor ranges in size and price, topping out at $5,000+ full size cabinet humidors that could easily fit a small cigar shop worth of cigars. But towards the smallest end in both size and price is NewAir’s CC-100. At 14 x 19.5 x 19 inches it’s not exactly small and at $279.95 it’s also not particularly cheap, but it is the entry-level option for this type of humidor. 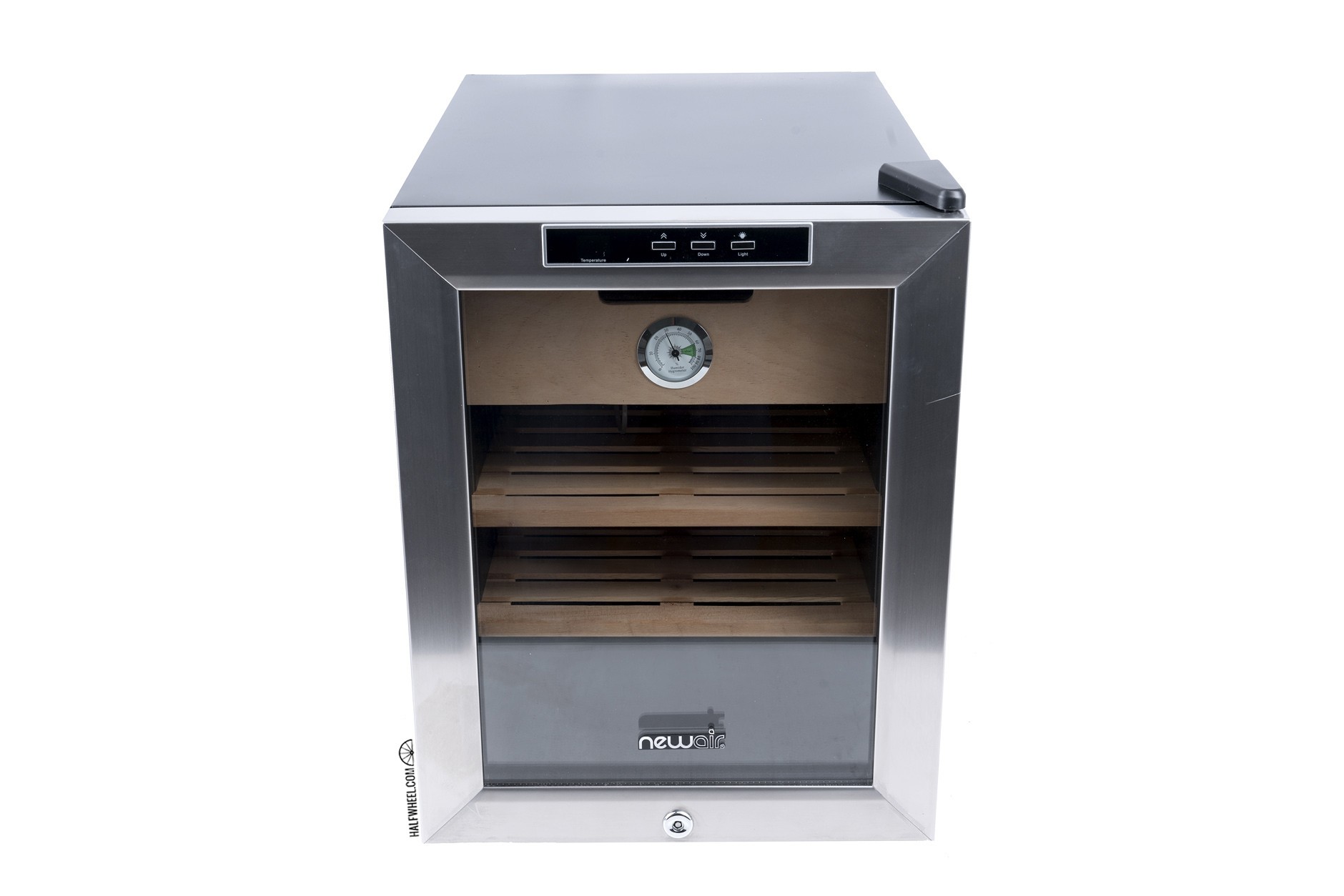 Recently, NewAir updated that model to the CC-100H ($299.95), which is virtually identical, but added both a lock and a heating element designed for people who need to warm their humidor in winter months.

With a stainless steel and glass door and black surroundings, the unit looks like a small wine cooler, which would make sense considering NewAir also sells a wine-oriented version of this humidor, Up top is a panel that shows the temperature, as well as controls to adjust it, and a button that operates  a blue interior light. Down the left is a handle to open the door and on the bottom is the aforementioned lock.

NewAir ships the unit with two shelves as well as one tray, the latter of which has a built-in analog hygrometer. In addition, there are keys and a small blue bucket, described as a “moisture container,” which the company says is for humidification.

And that’s where the disclaimers start.

None of NewAir’s humidors include any sort of humidification beyond a small plastic bowl. The company advertises the units as “airtight” which solves one of the two humidification issues with wine coolers, but it doesn’t include a humidifier. Fortunately, for a unit of this size you have a lot of options, with my suggestion being the Cigar Oasis Excel. Unfortunately, it’s not included, which would bring the total price of this particular configuration over $400.

The good news is that the unit holds humidity. I tried using NewAir’s included “moisture container” option and to my surprise, I found that even after two weeks the unit was still reading 78 percent relative humidity. I suspected that it would decrease as the cooling unit ran, but it didn’t. That led me to try something I would have never considered back with my repurposed wine cooler: Bovedas.

Over the course of a three week period I saw a 1.1 percent range of relative humidity after placing six Boveda packs in the humidors. During that same period, there was a .9 percent difference in temperature, despite the unit sitting in a closet with two fridges, i.e. a room that regularly reaches 78 degrees.

And the units works. In nearly two months of testing, I didn’t have any issues with the cooling, and after installing my own humidification system, had no complaints about humidity levels.

But I wouldn’t recommend the NewAir CC-100H.

The real issue is that it’s just too small, which seems odd given that this thing is the size of multiple large desktop humidors. However, while the NewAir CC-100H has a volume of 5,187 cubic inches, the interior volume, i.e. usable space, is only 2,002 cubic inches. It is rated to store 250 cigars, something that is no doubt possible, but not easy.

Because it’s designed for wine bottles, the interior is somewhat awkwardly shaped as far as a humidor goes. It’s extremely long, but not really long enough where you could fit most cigar boxes two deep. It is also  deceivingly narrow, as the walls of the cooler bring the interior down to 11 inches, far narrower than most humidors. That also happens to be an awkward dimension: wide enough for most boxes, but not wide enough to fit more than a box in, save for the smallest of cigar boxes. 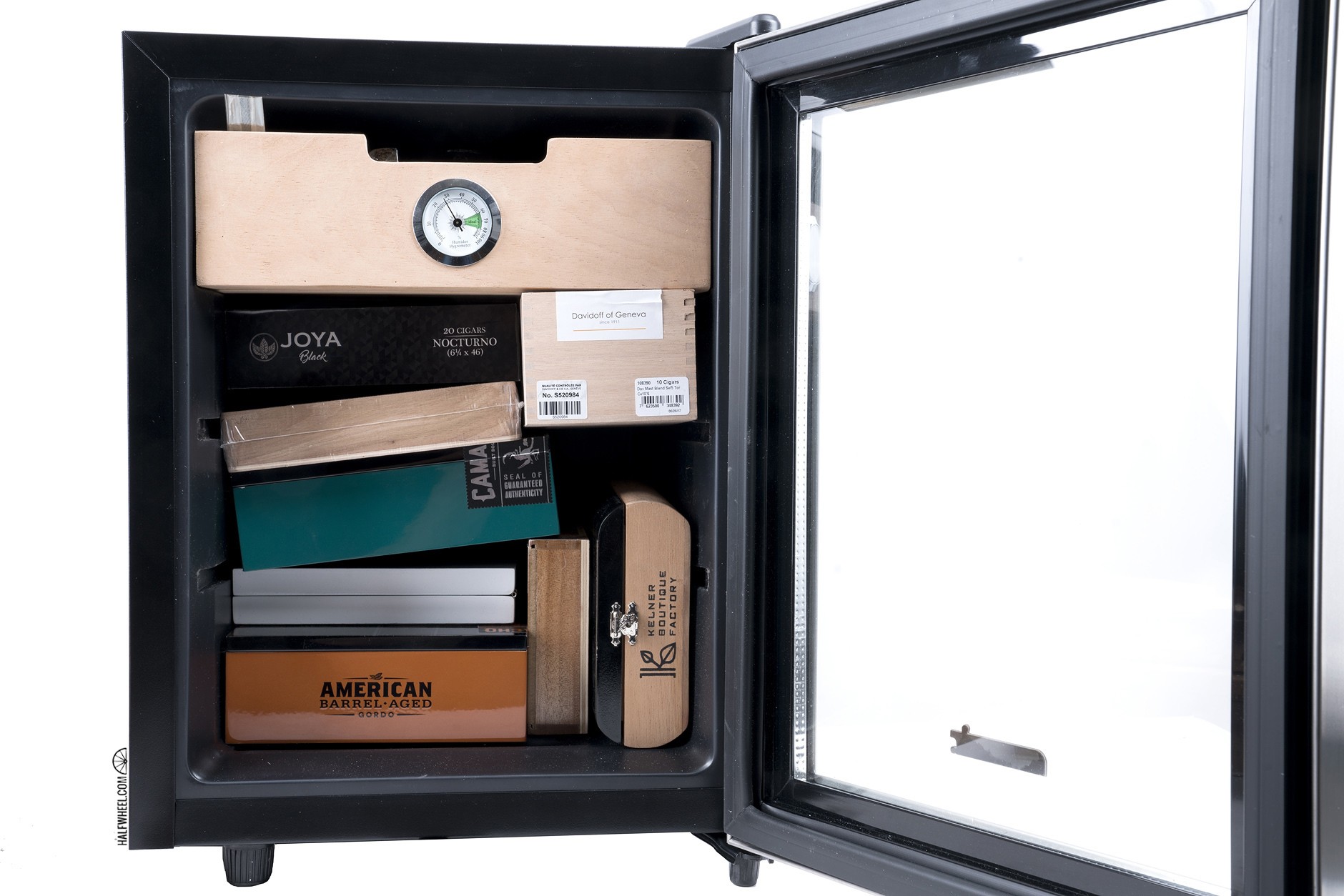 Those issues of losing space for the cooling units and the sides aren’t unique to the NewAir CC-100H, but proportionally speaking, the smaller unit gets punished a lot more. My guess is that the NewAir CC-300, the 28-bottle version of this humidor, has a much higher percentage of usable volume than the 38.5 percent I measured my CC-100H. Yes, that’s right, less than half of the space of the humidor is actually usable.

As for the CC-100 versus CC-100H, I couldn’t test the main feature, which is the heating element. It’s currently 90 degrees outside our Addison, Texas office, but NewAir says the humidor is designed to work in rooms with temperatures between 50-80 degrees Fahrenheit. Of note, the user manual specifically says it’s not designed for basements, which seems odd given that would seemingly be the target market for the heating element.

For those wondering about the lock, it’s a simple 5-sided hexagon. I imagine a semi-decent set of hex keys can probably mimic the key pattern. If not, turning it over reveals the locking mechanism is held in via two Phillips screws. So the short of it is, I wouldn’t feel comfortable using the lock to keep people away at an office or rental property, but if you want to make sure your five-year-old doesn’t get into your cigars, this would work. Given the $20 difference in price, I also imagine you could go to a hardware store and find a more secure solution, albeit one that probably voids NewAir’s warranty.

As I noted above, if this sounds like something you might use, just buy the bigger one. The NewAir CC-100H works as intended, but as is often the case, you get what you pay for. In this case you get something that functions, but isn’t as functional as it looks. The non-included humidifier is annoying, but not really a dealbreaker. However, the awkward and deceivingly small interior is. Some of these issues will still present themselves on the larger CC-300, but your cost per cigar stored will go dramatically down with the larger unit. Regardless, this is a far easier solution than the one I tried to create eight years ago and for about half the cost.

One additional note, in the course of researching the unit NewAir has been running promotions for new customers with advertised discounts ranging between 15-20 percent.

The unit for this review was sent to halfwheel by NewAir.