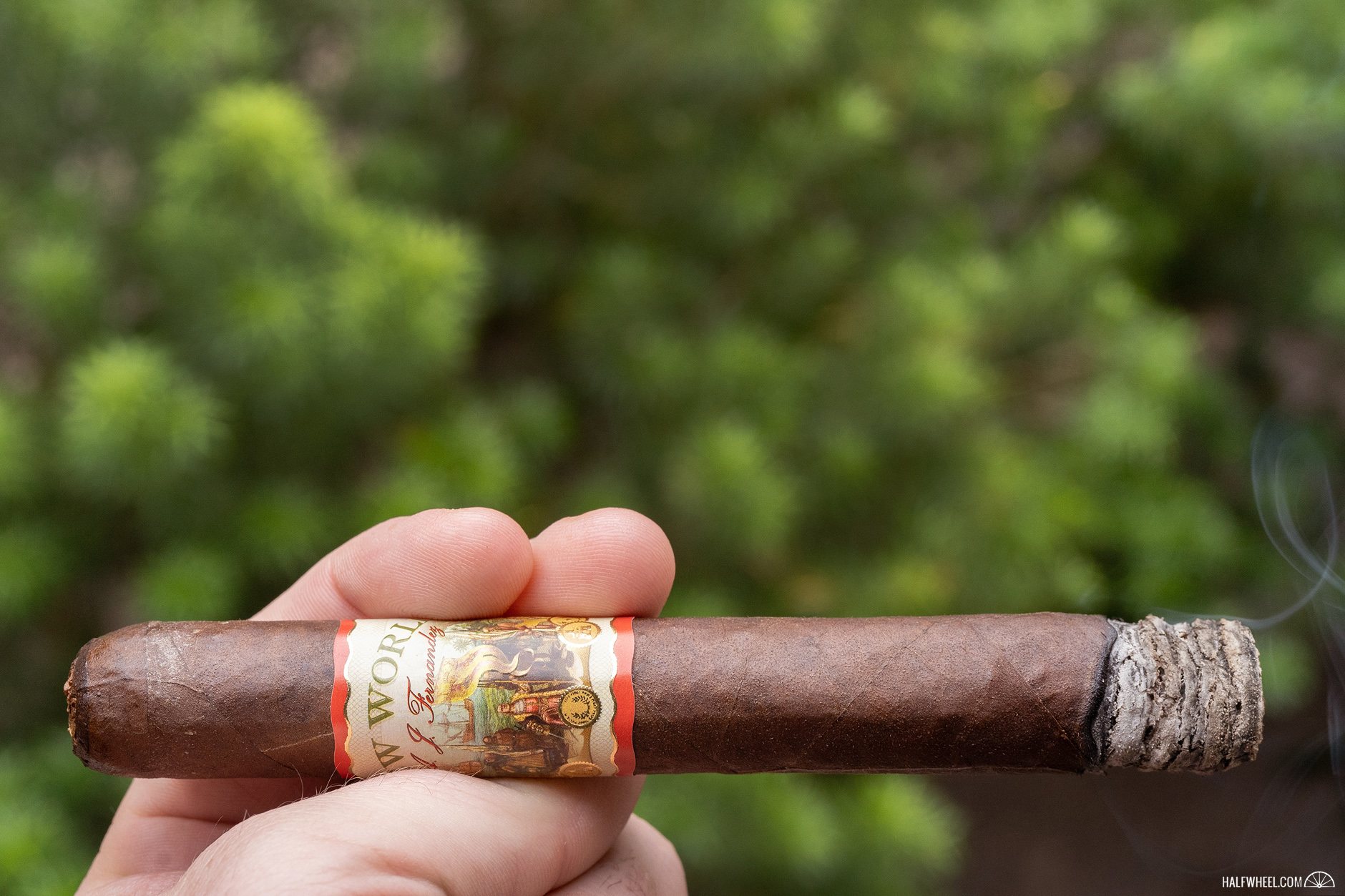 AJ Fernández’s contribution to the Tobacconists’ Association of America Exclusive Series of cigars was notable not necessarily for what it was, but what it wasn’t, and that’s box-pressed.

This year, the company released the Redondo, a new 6 1/2 x 55 toro extra vitola for its New World line, and while the other four sizes in the line have all gone under the press to create a squared-off vitola, this size was spared the procedure. It’s what led to the name Redondo, which simply means round in Spanish.

As with most of the releases for the TAA, this is limited in production, with 1,000 boxes of 21 cigars produced and split into two waves of shipments, the first half of which went out in early May and the second half some weeks later.

If you’re not familiar with the TAA, it is a group of approximately 80 of the biggest and highest volume retailers in the country, many of whom own multiple locations, along with 40 or so manufacturers. At the tail end of winter or the first weeks of spring, they gather for a convention and trade show, the former of which sees discussion of issues facing the industry while the latter sees buying using a group format to secure some of the best pricing of the year, and often much better than that which is offered at the IPCPR Convention & Trade Show.

As part of that trade show, manufacturers will often offer exclusive cigars to the group, which could mean a distinct blend all together such as Tatuaje’s TAA series or simply early access to new lines that are coming out later in the year.

The New World line debuted in August 2014 and was notable for being a wallet-friendly Nicaraguan puro, specifically one that could sell for around $10 per cigar but be offered at around half that price. The cigar is a nod to the parts of the country producing tobacco and cigars not named Cuba, as they are often referred to in other parts of the world. It was a blend developed by Abdel Fernandez in collaboration with his father, Ismael, who joined his son’s company after spending 17 years with the Plasencia family. 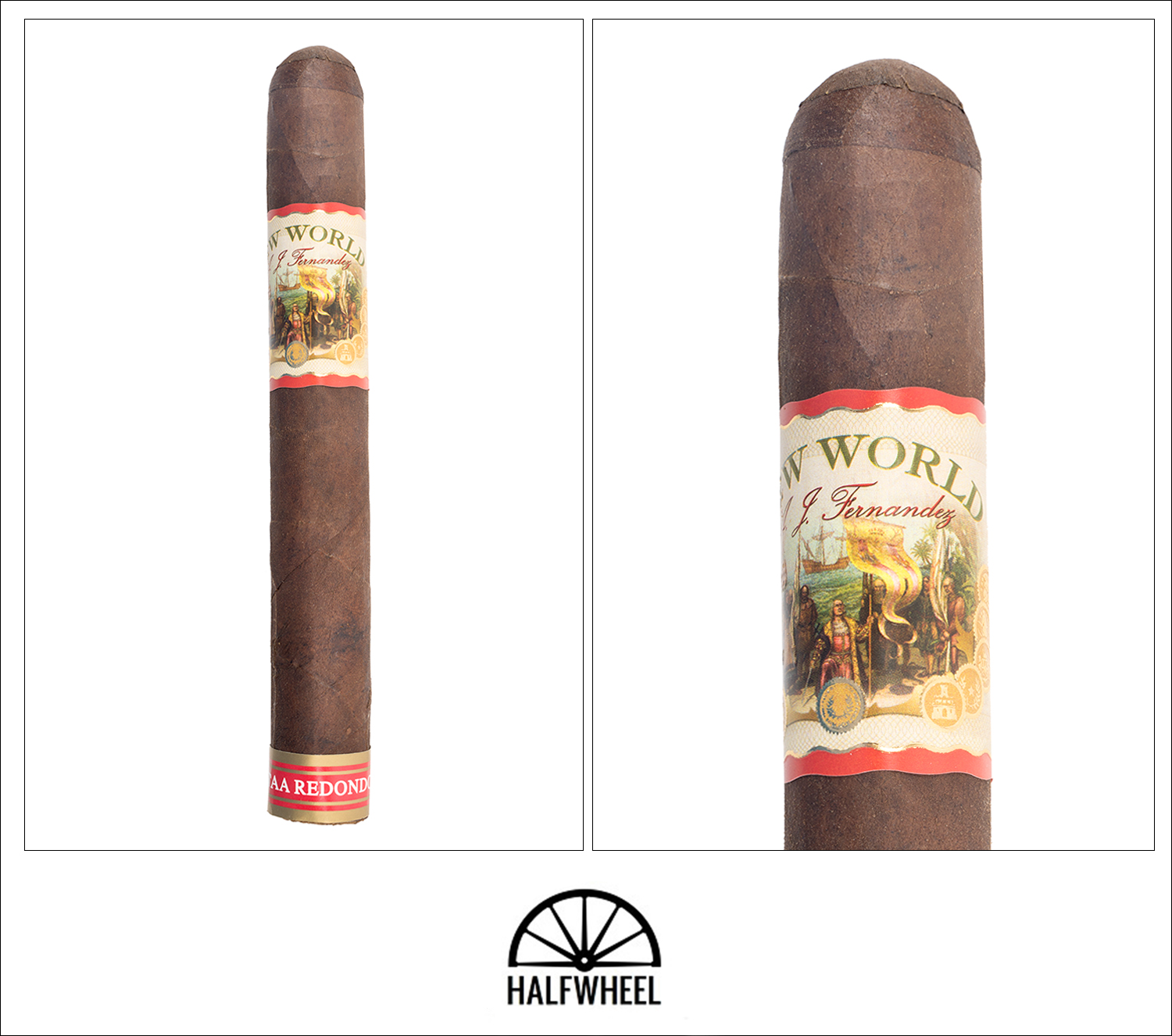 The cigar is a slightly beefier version of the size that has become the de facto norm in the cigar industry, chunking up the ring gauge to 55 from what has generally been between 50 and 52, and while it’s not a massive increase it is noticeable. The wrapper leaf still has a good bit of its trichomes, or tobacco hairs, and when held at the right angle it is easy to see them sticking up ever so slightly from the surface. They are also apparent to the fingers, both for their texture and the fact that they seem to trap a bit of oil on them as well. Beyond that, veins are small and few in number, and the color is a rich dark brown that is remarkably even. The construction appears to be quite good, as the cigar looks and feels like it is rolled well, and the caps are quite clean and well-applied. From the foot of the cigar I get a fragrant floral and lightly spicy aroma that might have been one of the least-expected things from this cigar, but it is enjoyable nonetheless. One sample is almost like walking into a flower store or nursery, while another has a more restrained expression that has me thinking of the nose of a fine Champagne. There is some pepper that comes along next and carries the aroma into heavier notes, namely a bit of milk chocolate and a very light potting soil note. The cold draw shifts the flavors towards soft chocolate chip cookies with only a trace amount of pepper in the mix and just one cigar showing the floral notes. It’s not overly sweet, but it isn’t hesitant to share the doughy part of that flavor with the tongue.

The New World Redondo starts out on a fairly familiar note, medium-bodied with some earth and pepper but nothing too overwhelming on the palate. There’s a bit less smoke production on the first sample than I might have expected, but it’s not concerning and seems to be an anomaly. My first retrohale comes not long after I the cigar has formed about a nickel’s thickness of ash and it is much more pepper-forward, bright with white pepper initially, then adding some dry woods for body and a bit of complexity. By the time has burned through its first inch, the profile has picked up a bit more black pepper and is showing more of a robust earth note, not quite Ometepe-level of volcanic soil but if you told me there was some in there I wouldn’t be surprised. The retrohale is a bit more linear now with black pepper, having shed the more pronounced wood note  earlier. The ash is also somewhat noteworthy, a light gray color with black rings wedged in at seemingly every major puff. Each of the samples burn quite well, with good to plentiful smoke production, a generally even burn line and no issues with the draw.

The start of the second third carries over much of how the first third finished, a bit milder than the start but still medium-plus to medium-full. Pepper is taking a bit of break from dominating things, and there’s a mix of woods and earth that has been slowly developing but now ready to take the reins for a bit. Right around the midpoint the New World Redondo gets markedly stronger and more robust, pushing a sharp black pepper to the forefront of the flavor and aroma, with decidedly more impactful results on retrohales. Along with that comes the first semblance of nicotine strength, something that gets felt through a much more intense flavor in the mouth before moving down into the chest and throughout my system. While not consistent among the three samples, the earth turns rocky in one cigar, which adds to the change in physical sensation that the cigar delivers. The technical performance remains stellar, with no issues to be found with the cigar at all. The New World Redondo stays fairly robust as it gets into its final third, now much earthier with a charred black pepper driving the flavors, a hearty cigar that sits in the full-bodied range. One sample seems to be showing more Ometepe than the other two, adding a volcanic spin to the flavor and taking the rocky earth note to an even more intense flavor. One thing that I’ve noticed but haven’t really commented on is the slight amounts of sweetness that the cigar holds; just a bit of dark chocolate the comes and goes without much fanfare but adds some depth and dimension to the profile. While it’s harder to get at this point due to the dominance of the earth, it doesn’t completely hide in the background. With just under two inches to go, there is a dry mint flavor that comes along to redirect the flavor one final time, letting just a bit of the earthiness go but keeping the bulk of the pepper in this new full-flavored expression. The cigar continues to burn near perfectly, with plenty of smoke, solid draw and an even burn line. The New World seems to be a blend that has done well at retail, and three samples of the Redondo show why. The flavors are a well-balanced medium to full, with hearty amounts of pepper and heavier earth notes providing a solid base for touches of sweetness to appear by way of mild chocolate. Additionally, the construction is top-notch, with none of the three samples presenting any sort of issue. What doesn’t sit as well with me is the nicotine strength of the final third, some of the strongest I can recall feeling in recent memory, and is the one thing that would hold me back from smoking more of these or recommending them to someone. But if you're not shy of strength, and you've got a strong, full stomach, the New World Redondo makes for a fantastic choice.