Three years ago, Abdel Fernández created a new cigar called New World, which is newsworthy in and of itself, but there was an aspect of the news that made it noteworthy — that Fernández had created the cigar with his father, Ismael.

The elder Fernandez is no stranger to the industry, having worked with the Plasencia family for 17 years, but the time had come for father and son to finally work together on a cigar. The original New World was crafted to be a value priced premium offering, delivering a Nicaraguan puro for around $6.

Since that launch, A.J. Fernandez has expanded the New World line to include a Connecticut version, some store exclusive sizes of the original blend, as well as a modified version for Zander-Greg’s 20th anniversary. This year, another new blend was added to the New World line: the Puro Especial

The cigar was blended by Ismael Fernández, a Nicaraguan puro that exclusively uses tobacco grown on his son’s farms in Nicaragua. The leaves have been aged between three and five years, but beyond that, Abdel Fernández was quite forthcoming about some of the blend’s specifics when the cigar was announced in early July. “We used our San Diego farm because of its incredible minerals. Our La Soledad farm yields tobacco with incredible flavors. La Providencia’s tobacco contributed the amazing aroma. Finally, our San Jose farm provided the blend with a rich and beautiful wrapper, due to the Criollo 98 seed I planted there many years ago.”

The New World Puro Especial is offered in three sizes. 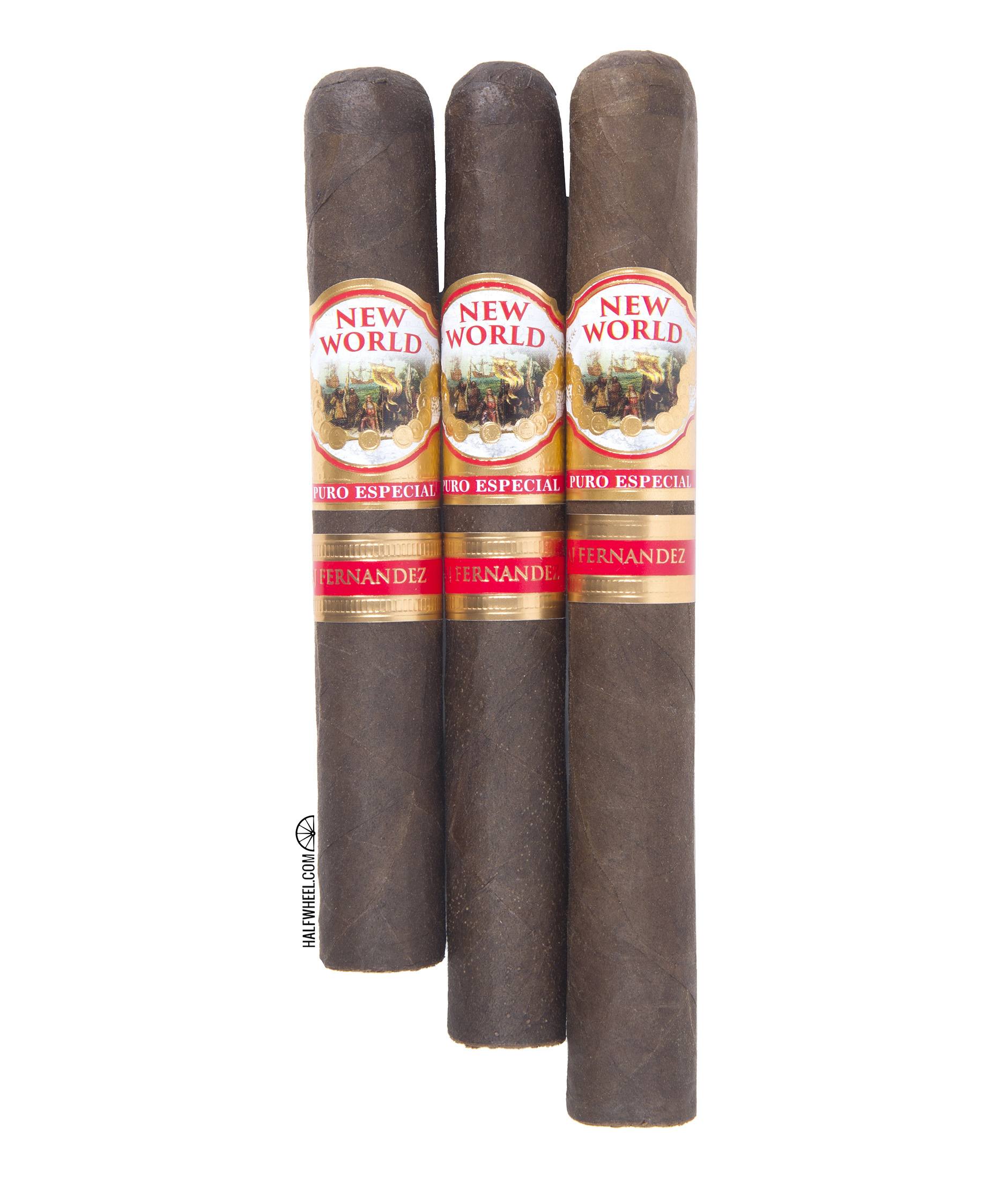 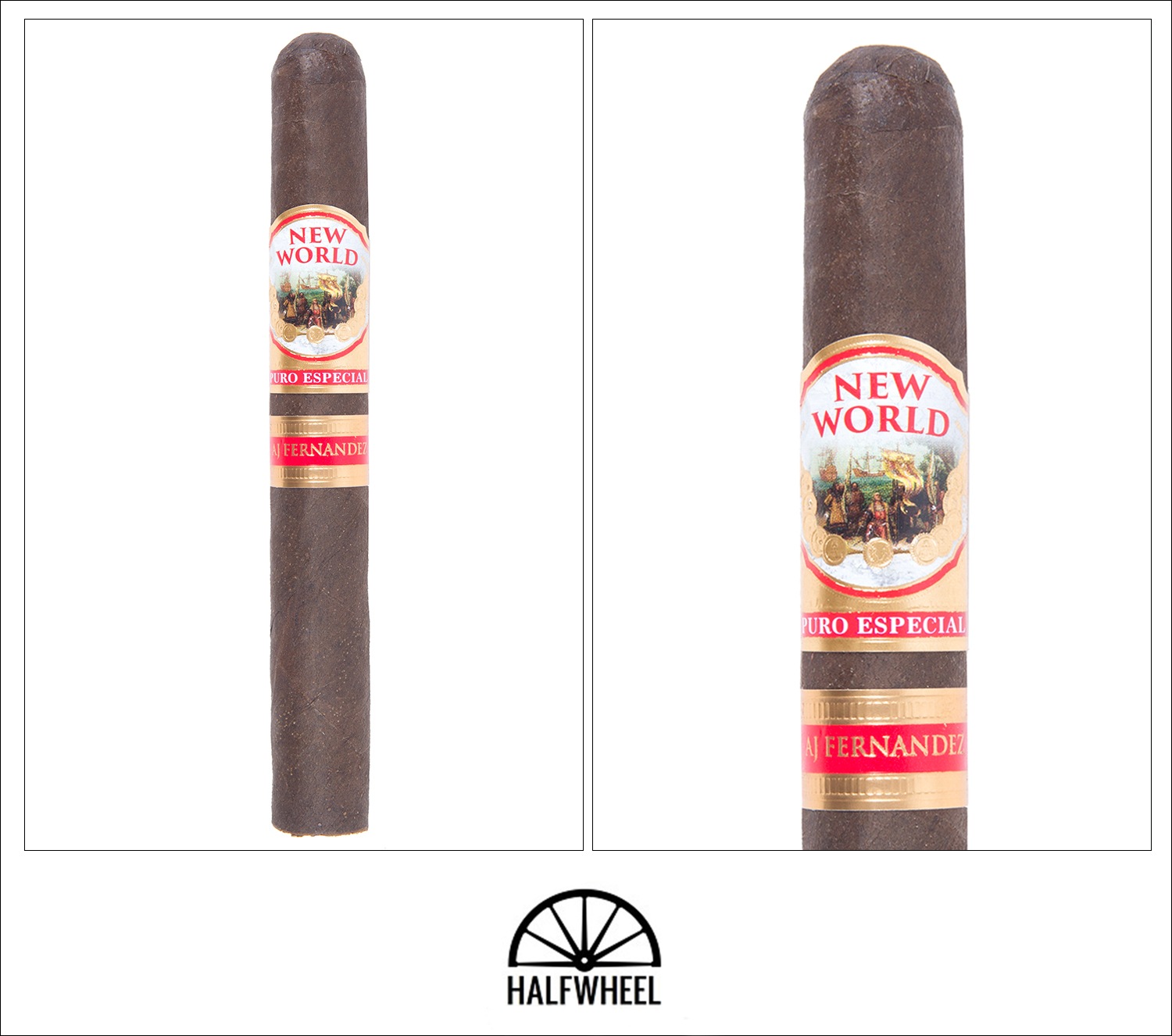 The wrapper has the color of well-roasted coffee beans and about as much tooth as I can recall seeing on a cigar lately. The veins are flat and noticeable, and the cigar is well rolled and quite firm. The foot offers chocolate, raisin, and pepper, an interesting combination that has me thinking movie theater candy before the latter of that trio lights up my nose when I take a deeper whiff. The cold draw is less pronounced and less sweet than the pre-light aroma, with a bit of pepper and remnants of raisin as the most prevalent notes.

The first puffs of the New World Puro Especial are generous with fairly peppery smoke, occasionally allowing the flavor to tread into the sharp end of the spectrum right out of the gate. There’s plenty of pepper to go around between the tongue and nose, so even if you don’t retrohale you won’t be left out of what this cigar has to offer. I’m a bit puzzled by some of the early flavors, as my mind wants to use the term minerals here but it’s neither as accurate or precise as I’d like. One sample has a touch of lime zest that comes and goes fairly quickly, but other than that I’m at a bit of a loss to pin some specific flavors on this cigar. It’s medium in both body and strength, though retrohales will nudge that assessment up a few spots. There’s no appreciable sweetness, no vegetal notes, and none of the more common descriptors—woods, nuts, meats—seem to fit here. A retrohale after the first clump of ash falls off just proves to still be quite peppery, picking up some red chili notes somewhere along the way. Even when the pepper settles down in intensity, it’s still present as a component in the flavor, almost as if a distinct glaze applied to the tobacco. The cigar performs well on the technical front, with plenty of smoke, easy draw, an even burn line, and fairly dense ash that holds on well. 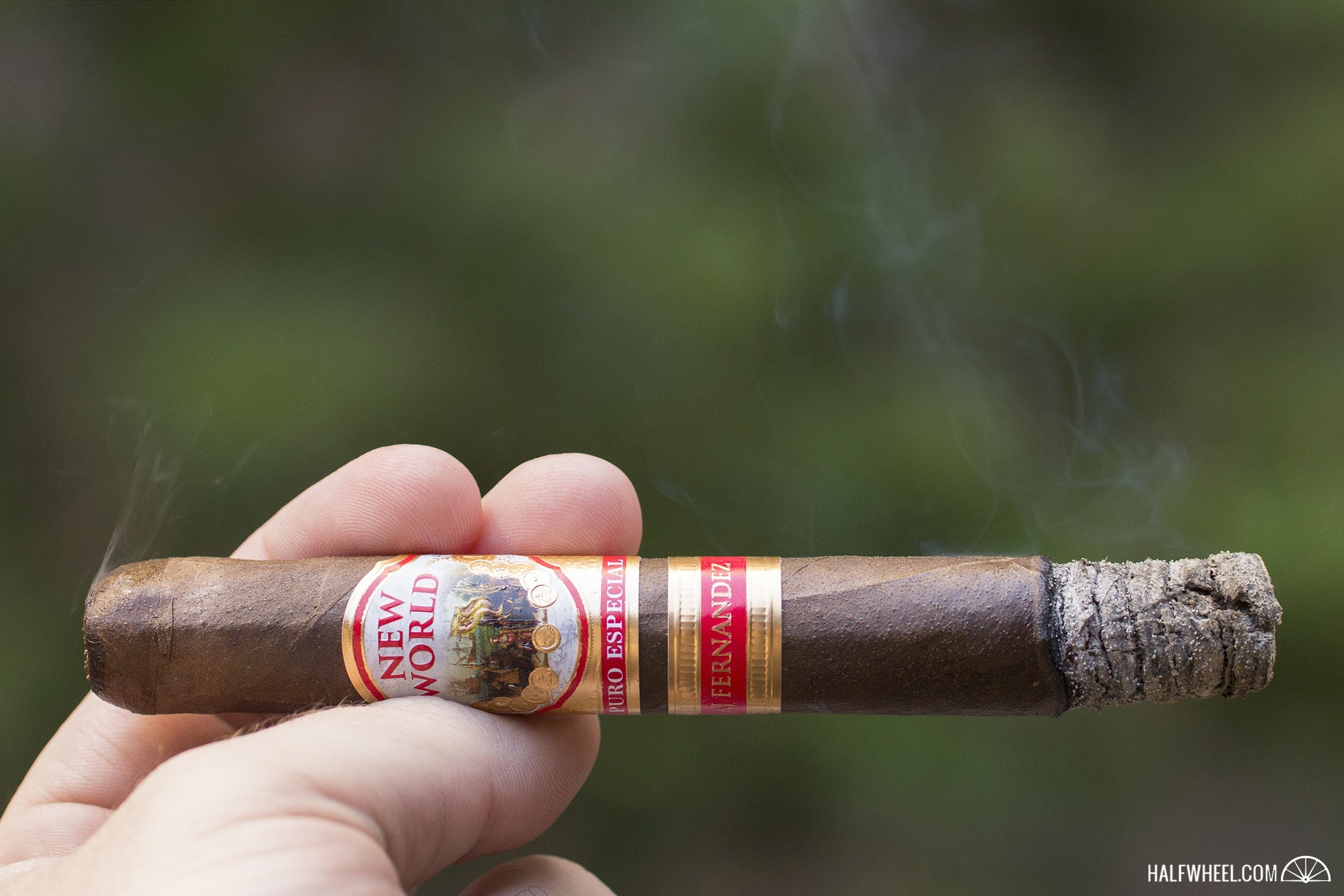 The mineral-esque component of the first third reappears at the start of the New World Puro Especial’s second third, at times the same intensity as earlier, at other times a bit more intense and as such, a bit less agreeable on my palate. A bit of chalk comes through in the nose, giving the retrohale a bit more complexity than it had earlier. The pepper also comes back into the cigar shortly after the second third begins, not quite as punchy—yet—as the first third, but not holding much back it seems. There isn’t much in the way of transitions in this section, and that hard-to-describe mineral note is now getting a bit sour, not to mention less than welcome on my tongue with each subsequent puff. The cigar continues to burn near impeccably, ranking about as good as I can remember or ask for. 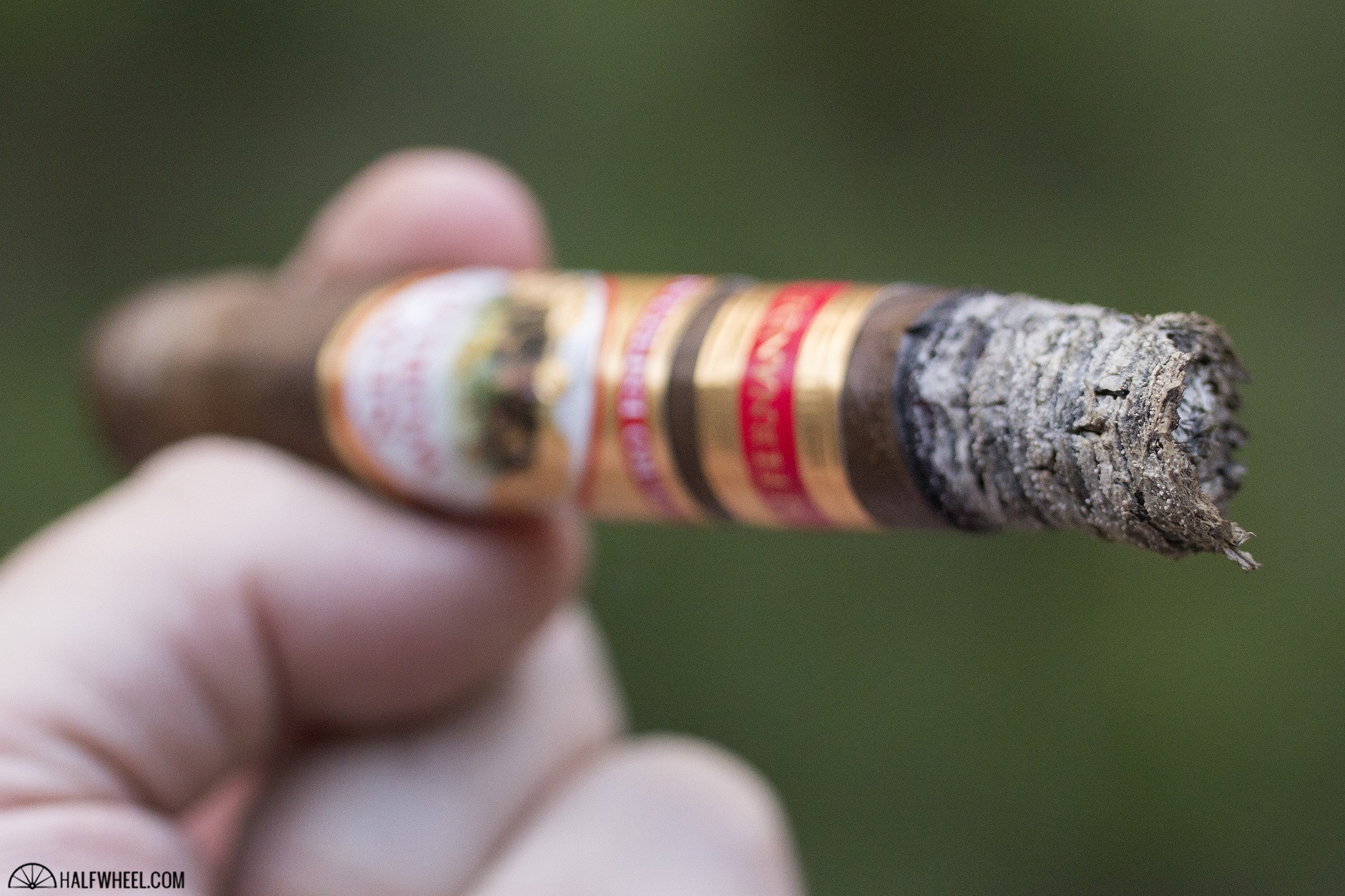 As much as I hope the funky taste that the New World Puro Especial Short Churchill continues to hold onto will leave, it seems quite content to stick around, though the third sample offers the tamest expression of it and as such, allows a bit of a neutral tobacco flavor to show through, with some typical espresso and coffee notes coming through, capped off by a bit of peppermint and creaminess. The cigar finishes with a bit more pepper, minerals, and a touch of saltiness, though more from the soil than a white shaker on the table. A bit of heat comes in at the tail end of the cigar, which smokes down flawlessly to the point where it becomes a choice of needing something to hold it or risk burning your fingers. 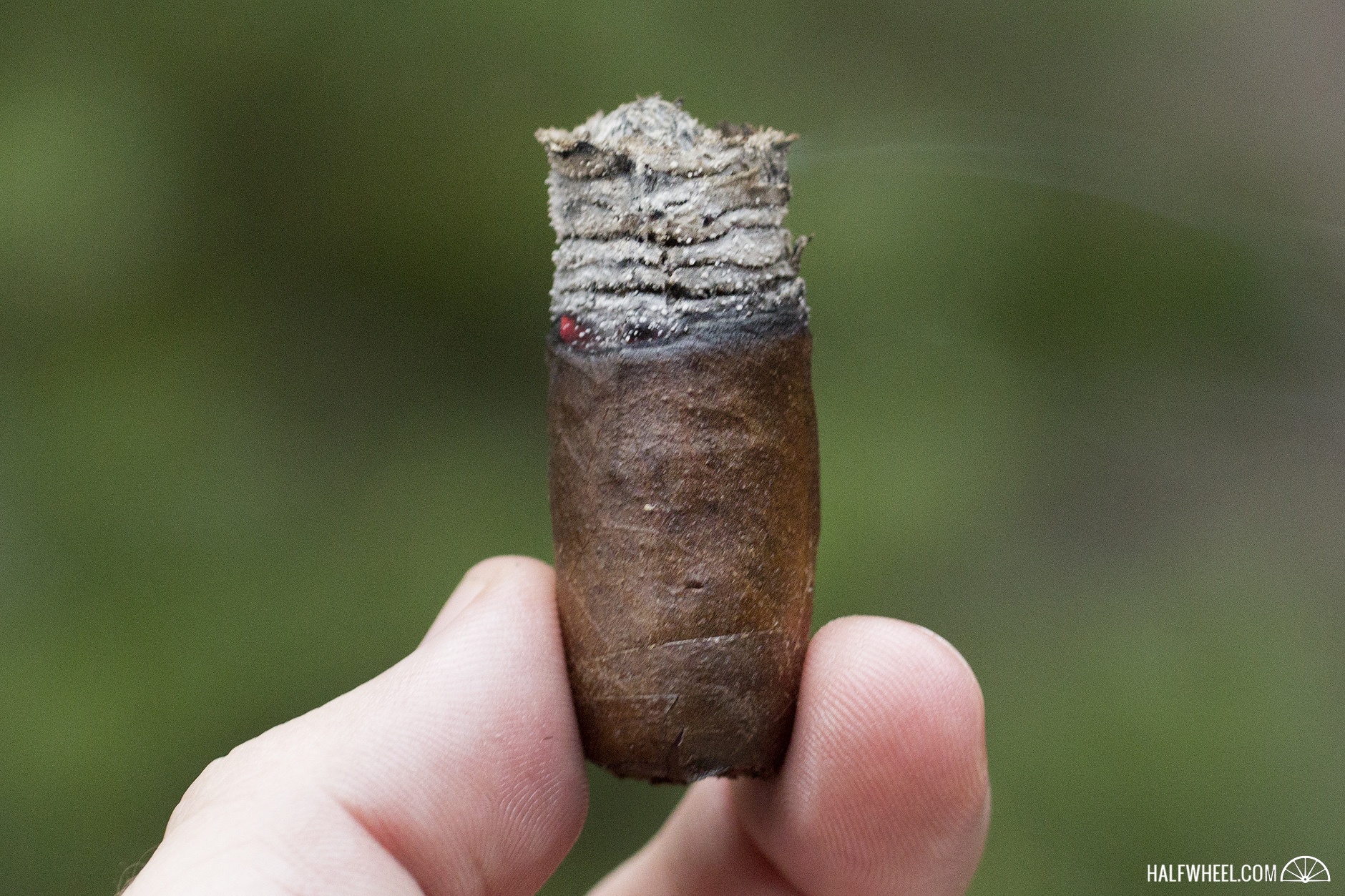 It's not often that I'm at a loss for words when it comes to a cigar, but that's the case with the New World Puro Especial Short Churchill from A.J. Fernández. There is certainly a flavor to the cigar, though I can't pin it down with the kind of specificity I prefer, or even the generality I'd expect at a minimum. There's a good amount of pepper that is punchy but still refined and seemingly mellowed with some age, a consistent factor that sits on top of a medium to medium-plus base. The mineral note is also a constant, and while I've never shied away from embracing mineral notes as a component of terroir, it leaves me lacking in this cigar. At a minimum, I'm interested in revisiting this cigar in a few months to see if it might just be in an interesting point of its maturation, or if it's just a flavor profile that doesn't work for me.