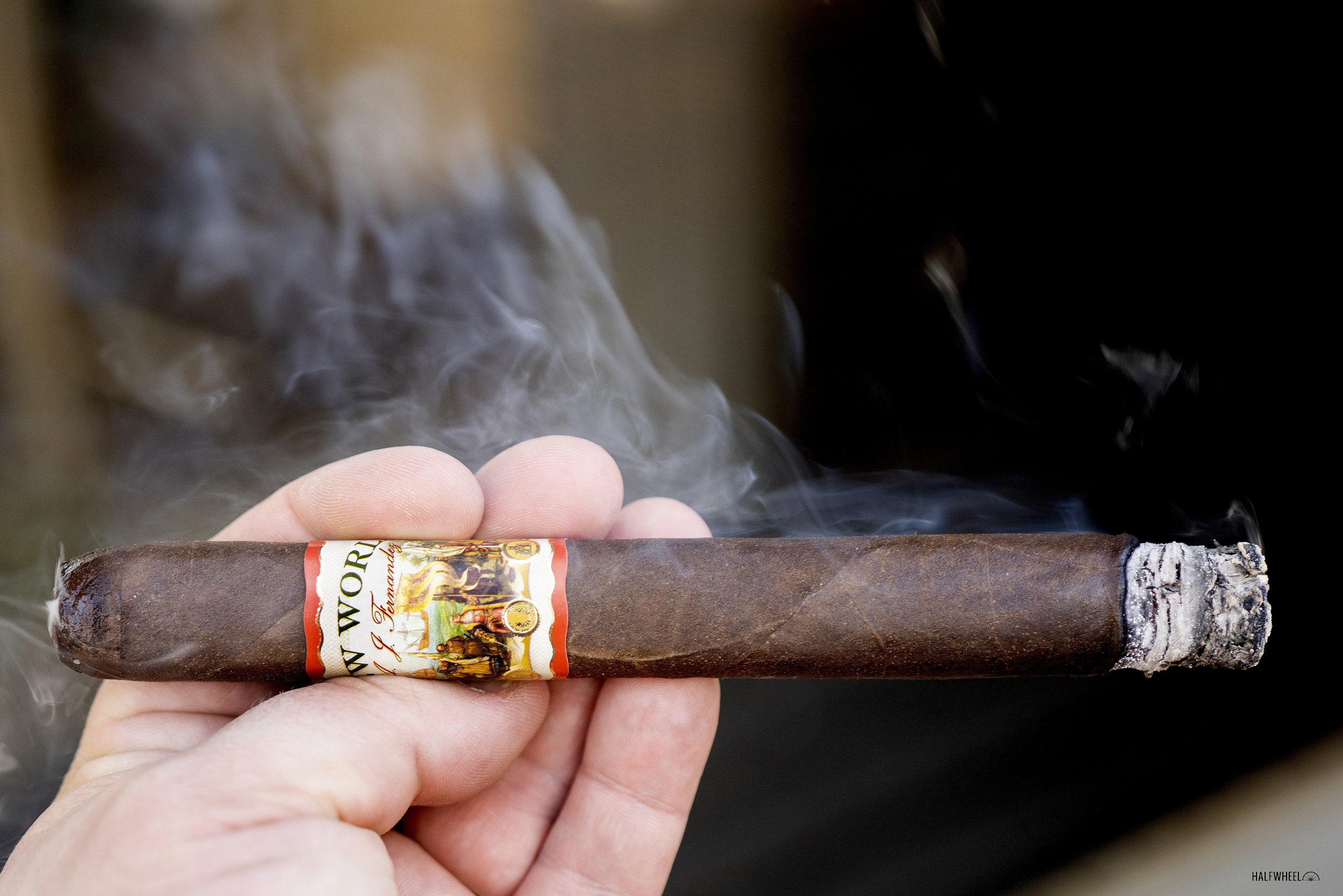 In 2014, Abdel Fernandez of AJ Fernandez developed a brand new blend with his father, Ismael, who had joined his son’s company after spending 17 years working with the Plasencia family. Dubbed New World, after a historical term that has been used to describe pretty much every tobacco-growing country other than Cuba, the creation was originally designed to be a product priced around $5 that would deliver the flavor of a cigar retailing for around twice that amount.

Since the original blend debuted, there have been a number of extensions to the line—including the New World Connecticut, New World Cameroon and New World Puro Especial—as well as a few different limited edition versions like four sizes with a tweaked blend made for distributor Zander-Greg in 2015, a 6 x 54 toro vitola incorporating a Mexican San Andrés wrapper released for Atlantic Cigar Co.’s 20th anniversary and a 6 x 66 gran gordo named the New World Brute that was released for the Texas Cigar Festival in 2016.

Earlier this year, AJ Fernandez began shipping a brand new size in the line, a 7 1/2 x 55 double corona priced at $8.50 each and packaged in 21-count boxes at the company’s Tabacalera AJ Fernandez Cigars de Nicaragua S.A. factory. Blend-wise, the new Double Corona vitola sports the same tobacco as the rest of the line, specifically an oscuro wrapper leaf grown in Estelí covering a binder from Jalapa and filler tobaccos from the growing regions of Condega, Ometepe and Estelí. Covered in a dark espresso brown wrapper, the New World Double Corona is extremely rough to the touch and features a very noticeable amount of oil. Although there are no soft spots that I can detect, overall, the cigar is quite spongy when squeezed. The aroma from the wrapper and foot is a combination of strong earth, barnyard, hay, leather tack, raisins and slight paint while the cold draw brings flavors of cocoa nibs earth, leather, hay, coffee beans and light citrus.

Starting out, the first third of the newest New World features a significant amount of both spice on my tongue and black pepper on the retrohale, while the palate is dominated by a combination of distinct oak and rich cocoa nibs. Secondary notes of dank earth, hay, bread, generic nuts, raw dough, coffee beans and leather flit in and out, while some raisin sweetness is also noticeable on the retrohale at times. In terms of construction, the draw is excellent after a simple straight cut, but the burn starts showing issues early on, forcing me to touch the cigar up a couple of times in quick succession. Smoke production is both copious and thick coming off of the foot, while the strength hits a point closer to medium than mild by the end of the first third and is still increasing.

Other than the fact that there is noticeably less spice on my tongue, there are not many major changes in the profile of the Double Corona during the second third: the dominant flavors continue to be a combination of oak and powdery cocoa nibs, the former of which has seemed to increase just slightly. Additional flavors of earth, hay, roasted coffee beans, cornbread and leather continue to fight for space in the profile, while the amount of the raisin sweetness and black pepper on the retrohale have both increased compared to what I noted in the first third. Strength-wise, the cigar hits a point very close to the medium mark before the end of the second third, while both the draw and burn give me no issues whatsoever. For better or worse, consistency is the name of the game during the final third of the New World Double Corona, with the now very familiar flavors of oak and dark chocolate the dominant flavor combination on the palate, followed by notes of gritty earth, creamy hay, leather, oats, generic nuts and slight cinnamon, none of which even approach the strength of the main flavors. In addition, while the spice on my tongue is not quite as aggressive as in the previous two thirds, the raisin sweetness and black pepper on the retrohale are seemingly holding strong. Construction-wise, the New World continues to feature a wonderful draw and a burn line that needs no attention with my lighter, but the strength has increased enough to pass the medium mark by the time I put the nub down with about an inch remaining. Full of both spice and pepper, the profile of the New World Double Corona has richness to spare, but is also quite linear, with oak, earth and leather easily dominating the profile for pretty much the entire cigar. While some raisin sweetness is present on the retrohale, there is just not enough to compensate for the aforementioned flavors leading to some balance issues that only gets worse as the burn line progresses to the final third. Throw in some minor issues with the construction and you are left with an enjoyable but flawed Nicaraguan puro that is far from the best size in the line.