To celebrate its 20th Anniversary, Atlantic Cigar Co. commissioned four different cigars from four different companies, all of them in the toro vitola. First came the Viaje Atlantic 20th Anniversary WLP 20th Limited Edition Toro, which was released in November 2016, while the second release is the cigar we are focusing on today, the A.J. Fernandez Atlantic Cigar 20th Aniversario was released shortly thereafter. 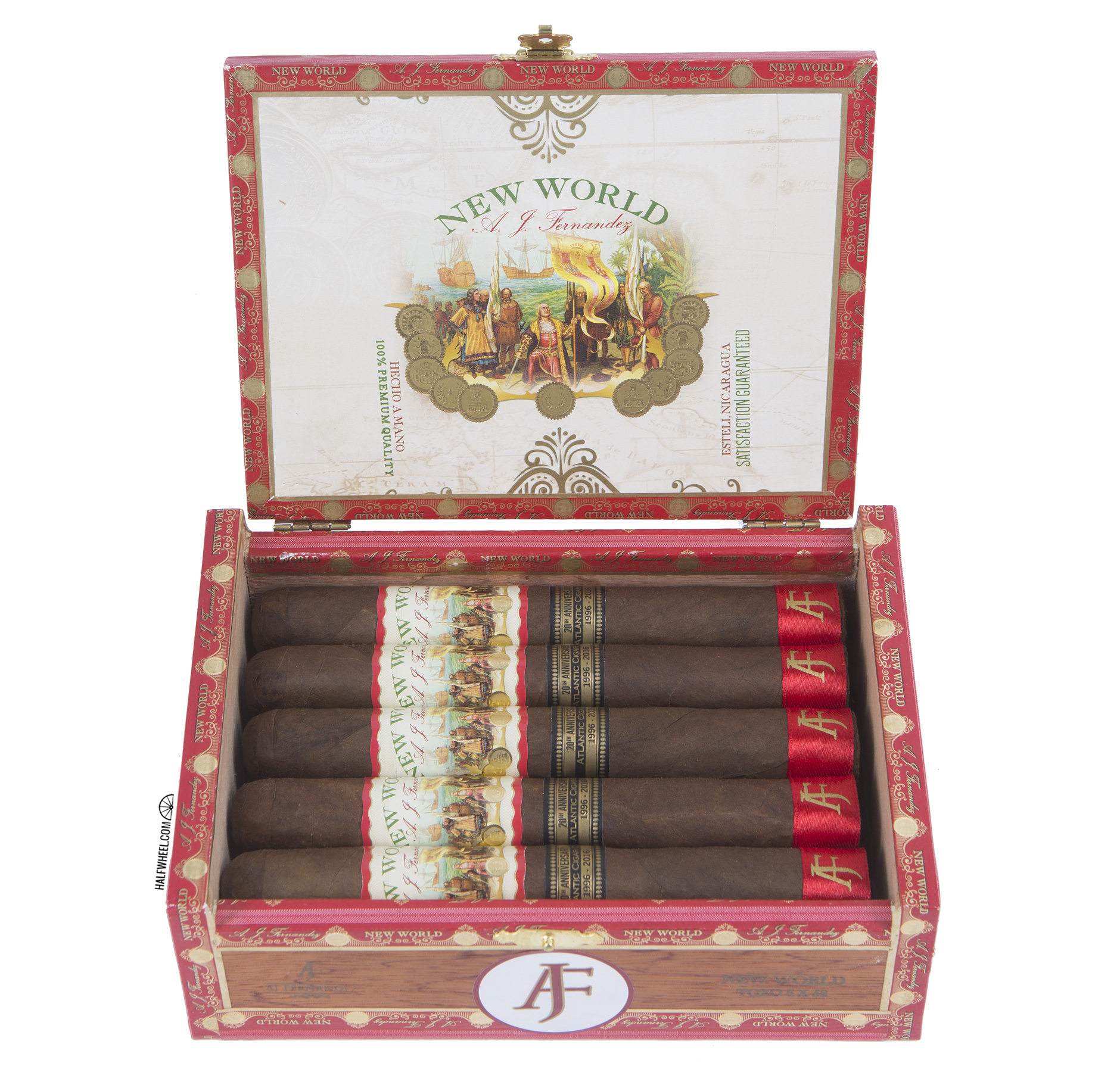 According to Atlantic, the Atlantic Cigar 20th Aniversario is a “tweaked” version of the company’s New World blend that replaces the normal Nicaraguan wrapper found on the rest of the line with a Mexican San Andrés leaf. In addition, the filler features added Nicaraguan ligero which increases the strength of the overall profile. Finally, the limited edition cigar is a round vitola, while the rest of the sizes in the New World line are box-pressed. Visually, the New World Atlantic Cigar 20th Aniversario is quite distinctive with a gold on black secondary band as well as a red ribbon foot band. The cigar is covered in in a dark mocha brown wrapper that is sandpaper rough to the touch, and features just a bit of oil. Aroma from the wrapper is a combination of strong manure, leather, earth, dark chocolate and pepper, while the cold draw brings flavors of espresso beans, hay, licorice, cocoa nibs and slight vague sweetness.

The Atlantic Cigar 20th Aniversario starts off immediately with a dominant creamy almond note followed by dark cocoa, gritty earth, hay, ground coffee beans and cinnamon. There is a nice amount of milk chocolate sweetness on the finish, as well as significant spice on my tongue and some black pepper on the retrohale that seems to be getting stronger as the first third burns down. Construction-wise, the burn is razor sharp so far, but the draw is a touch tighter than I would like, while the smoke production is massive coming off of the foot. The overall strength starts off fairly mild and fails to reach the medium mark by the time the first third comes to an end. Coming into the second third of the New World Atlantic Cigar 20th Aniversario, the dominant note remains the same creamy almond with aromatic cedar, bitter espresso, baker’s spices, earth, hay and dried tea leaves bringing up the rear. The spice on my tongue has only gotten stronger and the distinct milk chocolate sweetness on the retrohale combined with some remaining black pepper continues to be very overt. Fortunately, the draw improves, the burn continues to impress and the smoke from the foot is well above average. Strength takes a major step forward and ends the second third firmly in the medium range. The creamy almond note remains the dominant flavor in the final third of the cigar followed a distinct floral note, cedar, gritty earth, charred meat, hay, espresso and leather. Spice on my tongue is still present and the milk chocolate sweetness on the finish is still quite strong, but the black pepper on the retrohale has diminished noticeably. The draw continues to impress, but the burn has started to waver a bit forcing me to touch it up to a avoid it getting out of control. One big change is the strength level, which has increased noticeably, and hits a point just below the full mark right as the final third comes to a close. While I have not smoked every vitola in the New World lineup, I have had a few of them, and I can tell you without a doubt that the Mexican San Andrés wrapper on the A.J. Fernandez Atlantic Cigar 20th Aniversario definitely makes it not just a sweeter blend, but also a more complex profile overall. There is no doubt it is a full-bodied blend, but it is also quite balanced, with a dominant creamy almond flavor that really combines nicely with the milk chocolate sweetness that is present throughout the profile. A very nice cigar at a great price and a nice way to celebrate Atlantic’s anniversary.