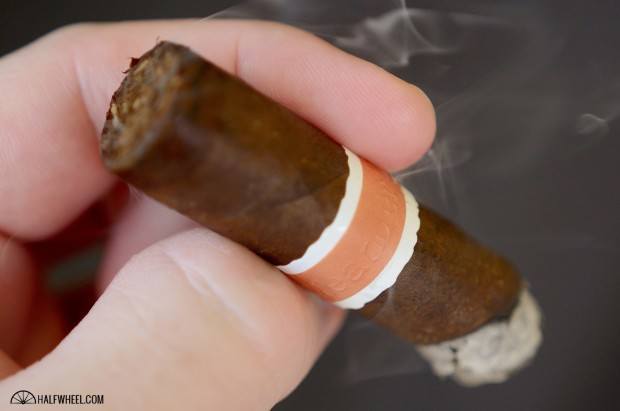 Only a few months ago, RoMa Craft Tobac released the first new line from the company since 2012, the Neanderthal.

Underneath the seemingly innocent Mexican San Andrés wrapper was a potent blend of tobaccos, one of which is the Pennsylvania “Green River Sucker One” double ligero. As noted by Skip Martin of RoMa Craft Tobac, this ligero has two to three times as much nicotine as any other tobacco used at the company’s factory, Fabrica de Tabacos NicaSueño S.A., and as such will be one of the strongest lines in the company’s portfolio. 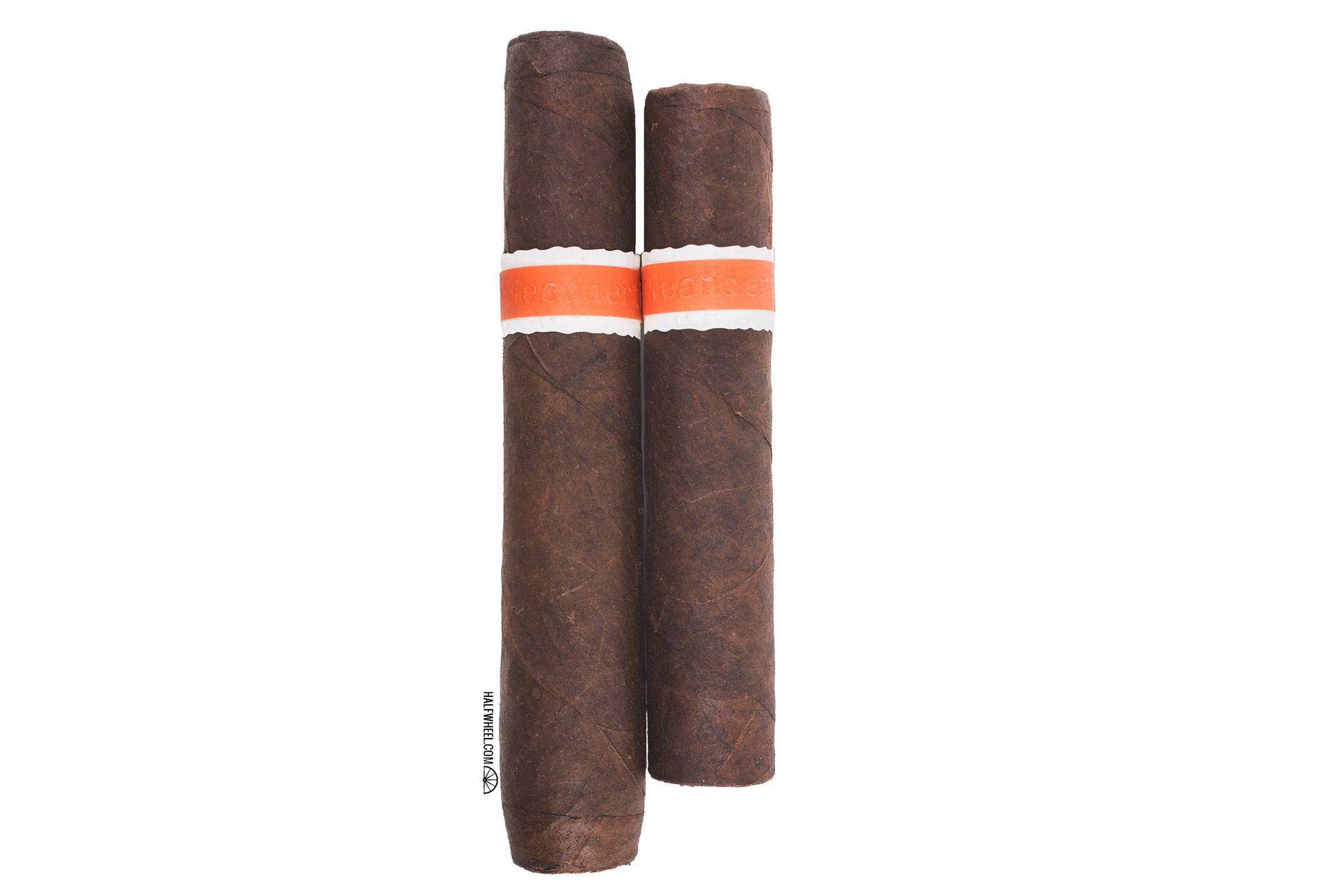 The first release was the HN, which Charlie Minato did a prerelease review of after the 2014 IPCPR Convention & Trade Show. Shortly after the HN’s release in May, the SGP was released as well. Lining up as a much more petite cigar than the HN, the SGP still uses the same blend and should produce just as much of a punch.

It’s an exclusive to two stores: Riverside Cigar Shop and Lounge of Jeffersonville, Ind. and Serious Cigars of Houston, Texas. 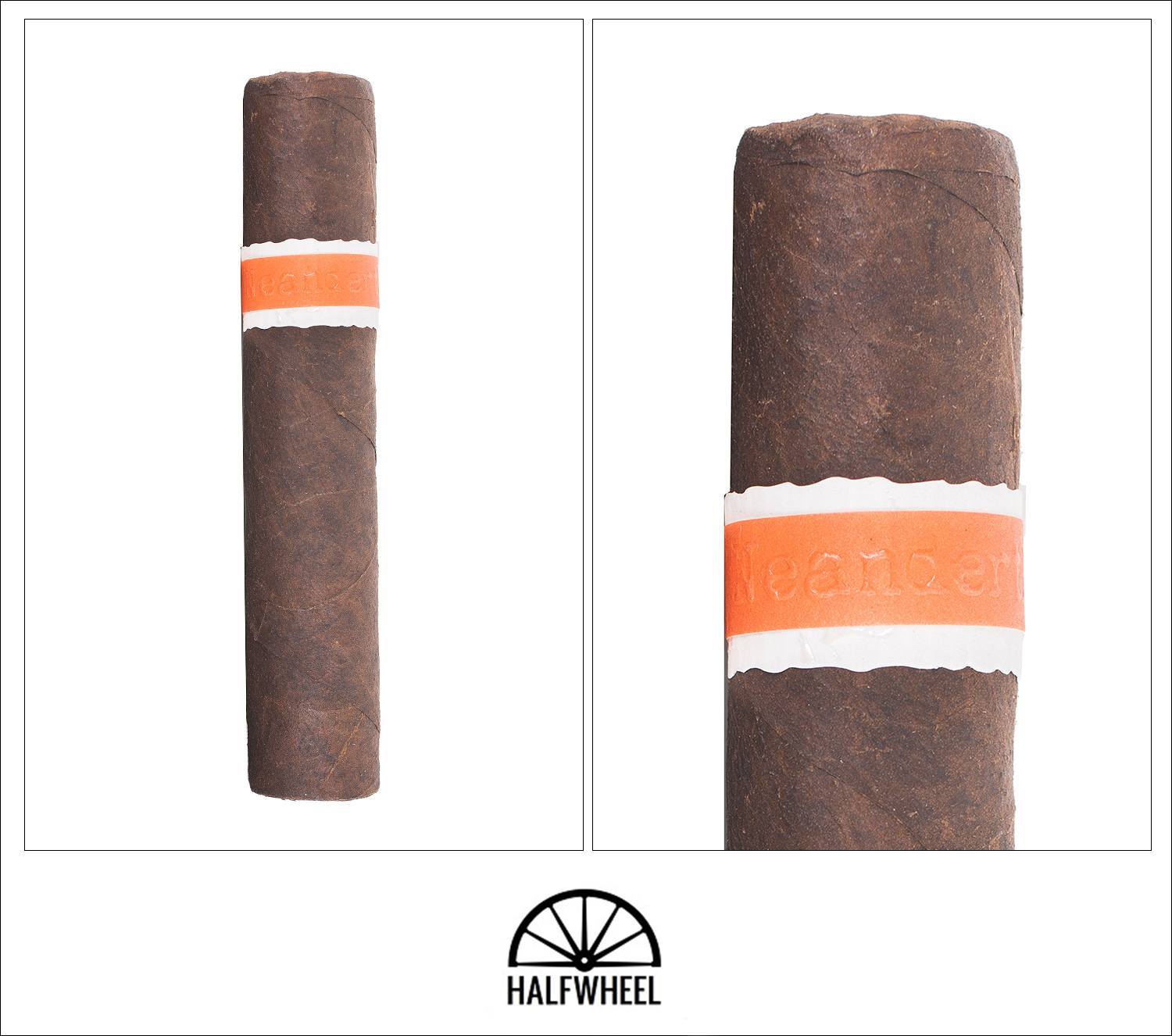 As I’ve come to expect with Mexican San Andrés wrappers, it is beautifully dark, rough and oily to the touch. The flat head cap is a unique feature while the band is a great contrast against the wrapper, with a simple but very cool design. Rich alfalfa, earth, leather and barnyard notes come off the wrapper in droves, while the cold draw produces rich milk chocolate, sweet peppers and a custard-like vanilla creaminess.

Starting out the first third, the profile is much different than the cold draw would have lead me to believe what I was getting into and much closer to what I was expecting originally. Strong black pepper, leather, a salty brown gravy note bombard my senses. The draw is ideal producing plenty of smoke, though it dies down to a trickle quite quickly after being put down. The burn is fantastic so far, stopping just short of what I would call razor sharp. As you see many times with San Andrés wrapper, the ash takes on its qualities with little white nodules dotting the surface of the medium gray ash, which wants to fall off around the three quarters of an inch mark. The profile continues with lots of black pepper, leather, brown gravy and some cayenne pepper that I can almost constantly feel on the back of my tongue. 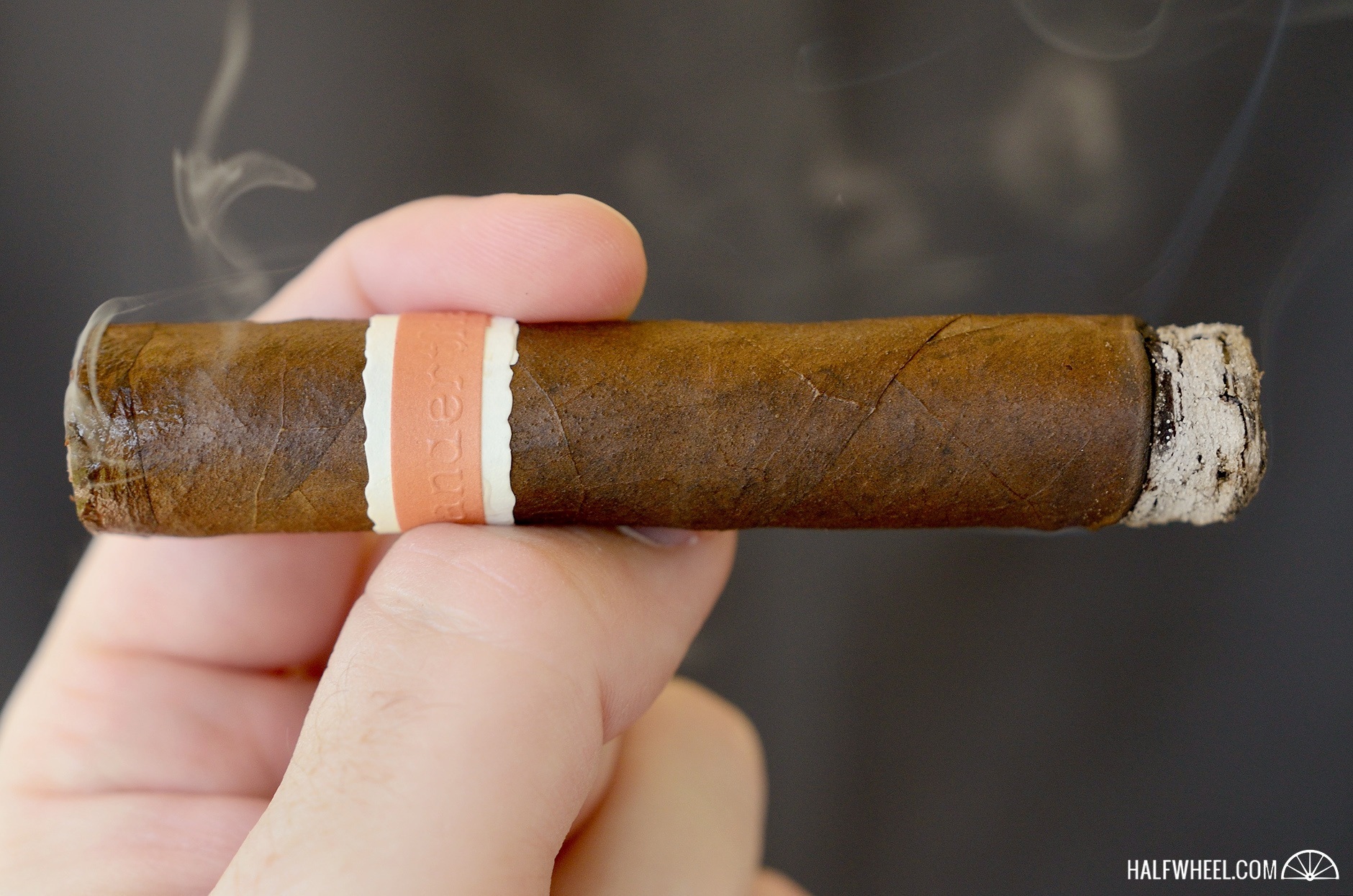 The second third continues with the same profile, but has mellowed out just a touch. I wouldn’t say it’s become mild, because it started out bold and strong and is still quite bold and very strong. The salty gravy note has faded somewhat, while the leather and black pepper still are very present. The cayenne fades as well, only occasionally showing up in the background. Though burn has become slightly jagged, a quick touch-up seems to get it back on track. The SGP continues to mellow out while still remaining a strong cigar, with less pepper and a creamy caramel note showing up in the mix. 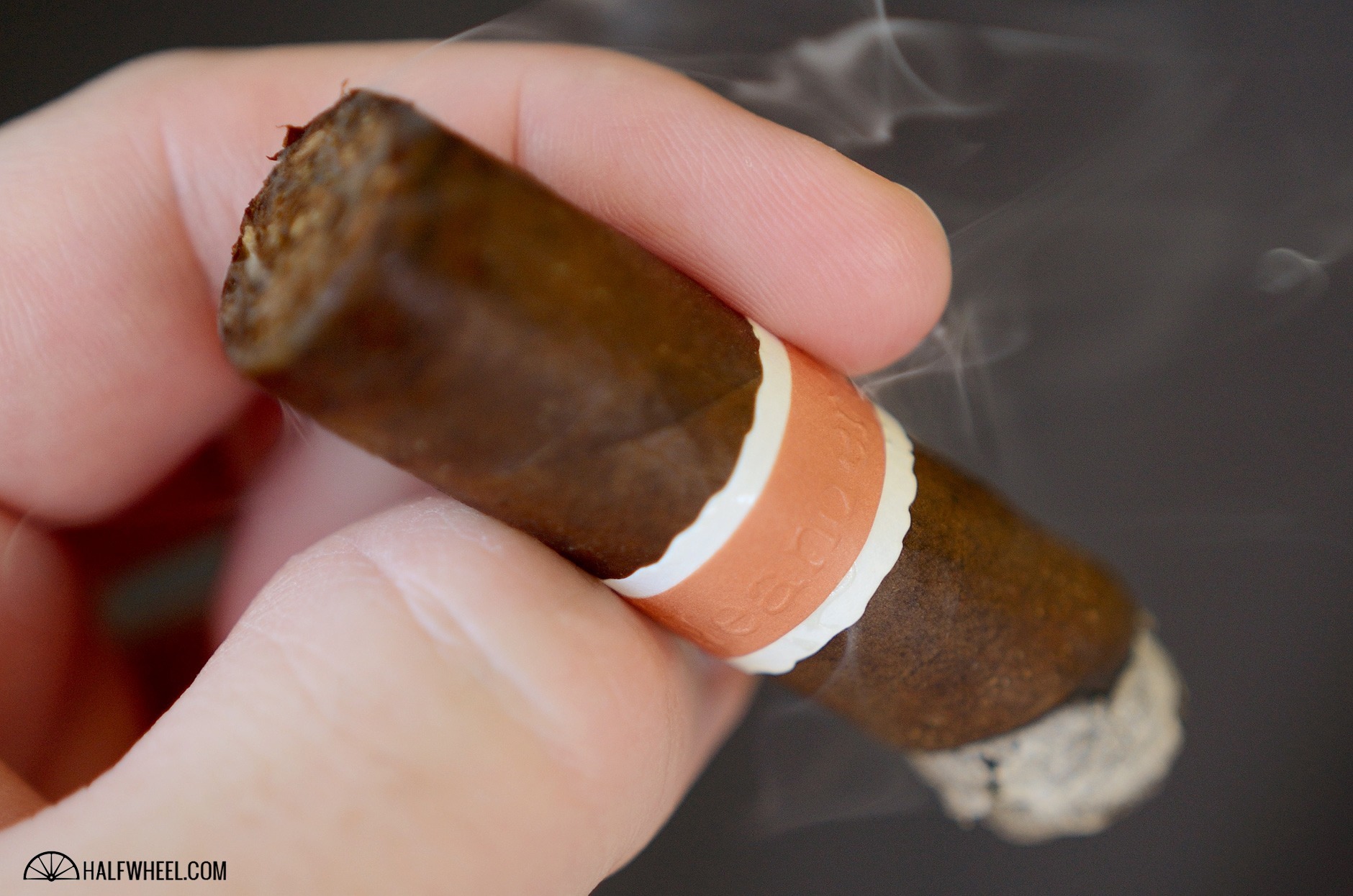 The final third doesn’t see much change, with another slight reduction in the bold profile and a bit of an increase in sweetness. It is still quite strong however, not changing in the strength department since the beginning. The burn has stayed even after the touch-up in the second third, though it’s not as sharp as it was in the first. The ash that has been slightly flaky has tightened up as well, making it less messy to smoke. While the profile has gotten sweeter, with the caramel note still sitting in the background, there is a meaty note that has developed by what seems to be a melding of the pepper and gravy notes from earlier. The cigar finishes smoothly—as smooth as this bold and strong cigar can—and finishes up without getting hot or harsh. 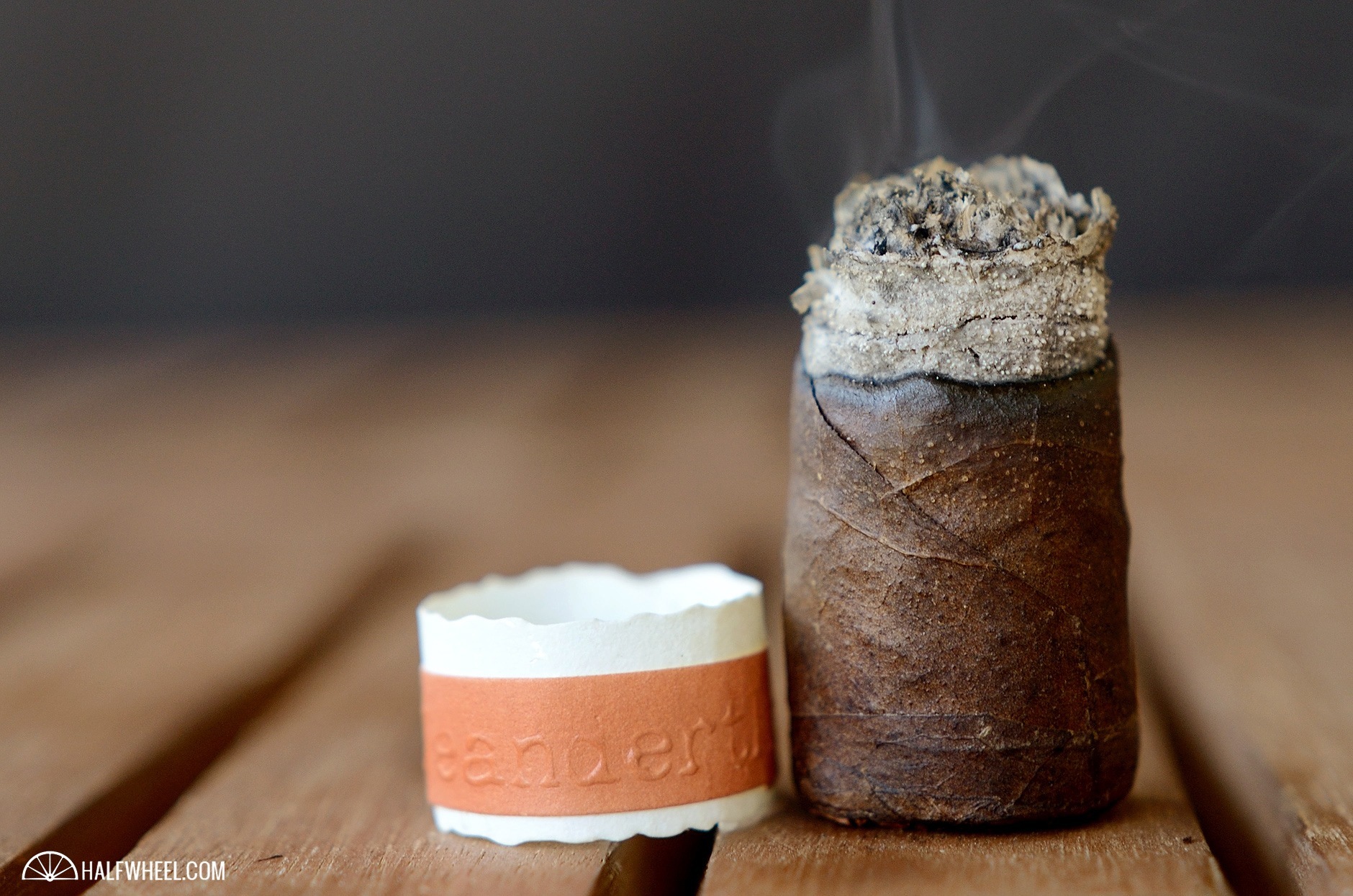 Having not had the chance to try the original Neanderthal HN, I don’t know how this would blend would translate into a larger cigar. The compact smoke gave enough of a punch that smoking the two samples back to back was enough for me. Having said that though, it’s a fantastic blend that has some interesting and enjoyable flavors and isn’t just in-your-face strong with a smothering amount of black pepper. The construction was great for the most part, with just a slight bit of annoyance from the flaky ash and a little touching up needed in the middle, but otherwise was easy to smoke and didn’t need any babysitting. If your profile leans towards a strong, bold cigar, then the Neanderthal SGP will be right down your alley. You might shy away from the price tag of a 4 1/4 robusto, but you’d be doing yourself a disservice if you didn’t at least give these a try.