My Father The Judge TAA Exclusive 2020

After launching The Judge brand during the 2016 IPCPR Convention & Trade Show with only two sizes—a 5 x 60 and a 6 x 56—it took almost another year for My Father Cigars to add a third vitola to the lineup. That happened in March 2017, when The Judge Toro Fino was released, a 6 x 52 that was not only the smallest ring gauge in the line up to that point, but also was the first to be packaged in boxes of 24 instead of boxes of 23.

After that, it took almost exactly three years for another size to be added: The Judge Corona Gorda, a 5 5/8 x 46 corona gorda packaged in 23-count boxes that began shipping to retailers in March. Fast forward less than a month, when My Father Cigars announced that it would be releasing yet another brand new vitola in The Judge line that would be sold exclusively to members of the Tobacconists’ Association of America (TAA.) Measuring 5 1/4 x 52, the My Father The Judge TAA Exclusive 2020 is packaged in boxes of 23 cigars with only 1,500 boxes produced and features a TAA embossed gold ribbon foot band. As with the rest of The Judge line, the new TAA release is made up of an Ecuadorian Sumatra wrapper covering dual Nicaraguan binders of corojo and criollo, and an all Nicaraguan filler. The cigar is rolled at the My Father Cigars S.A. factory in Estelí, Nicaragua.

There are now five different sizes in The Judge line. 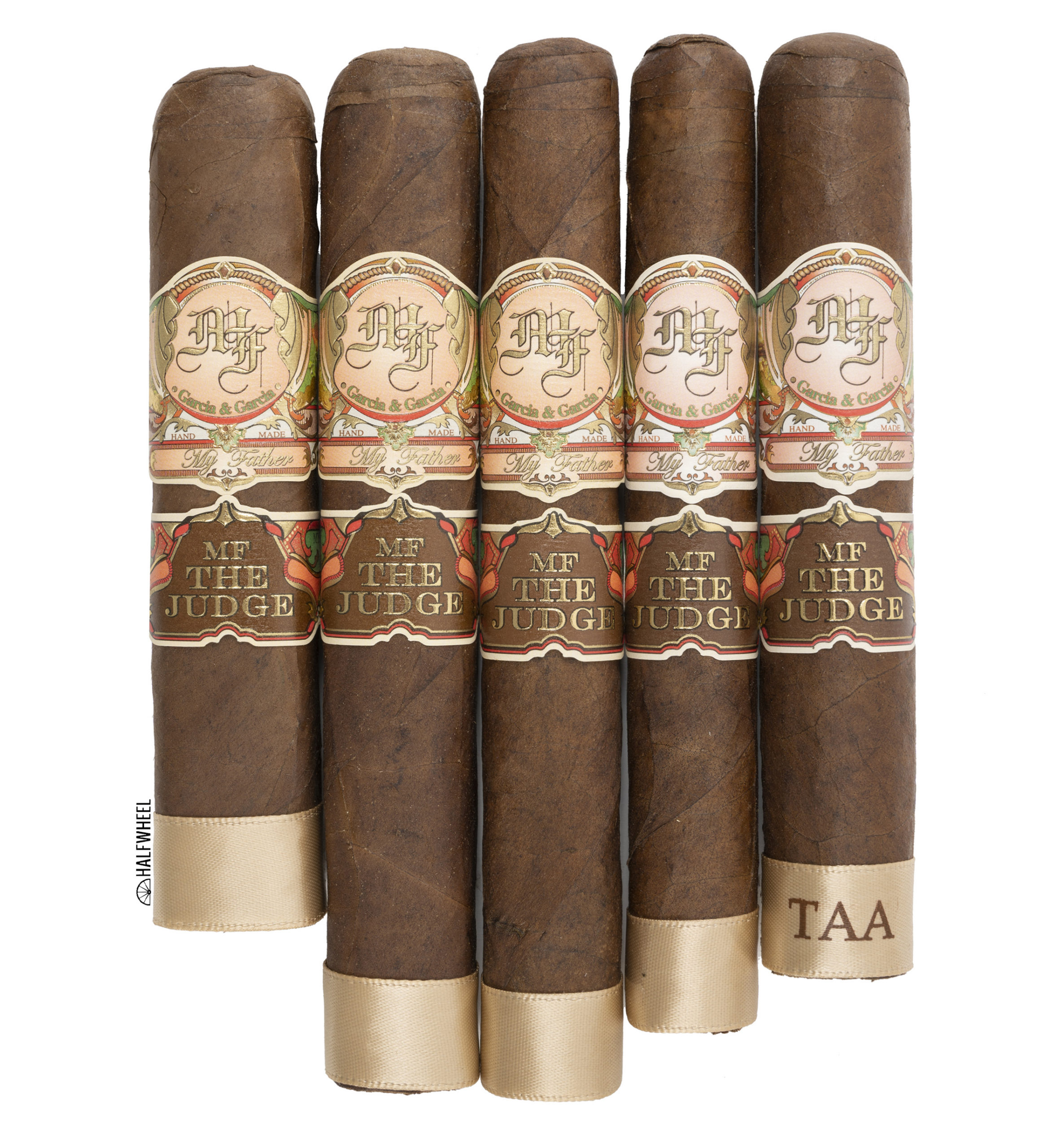 For those who are unfamiliar with the particulars of what the TAA is, Charlie Minato has provided a very good description:

However, for consumers the TAA is most known for its Exclusive Series Program, which involves exclusive cigars from participating manufacturers which are only sold to the retail members, with a portion of the sales of those cigars donated back to the TAA.

For 2020, there are 14 companies that have new TAA exclusive releases: 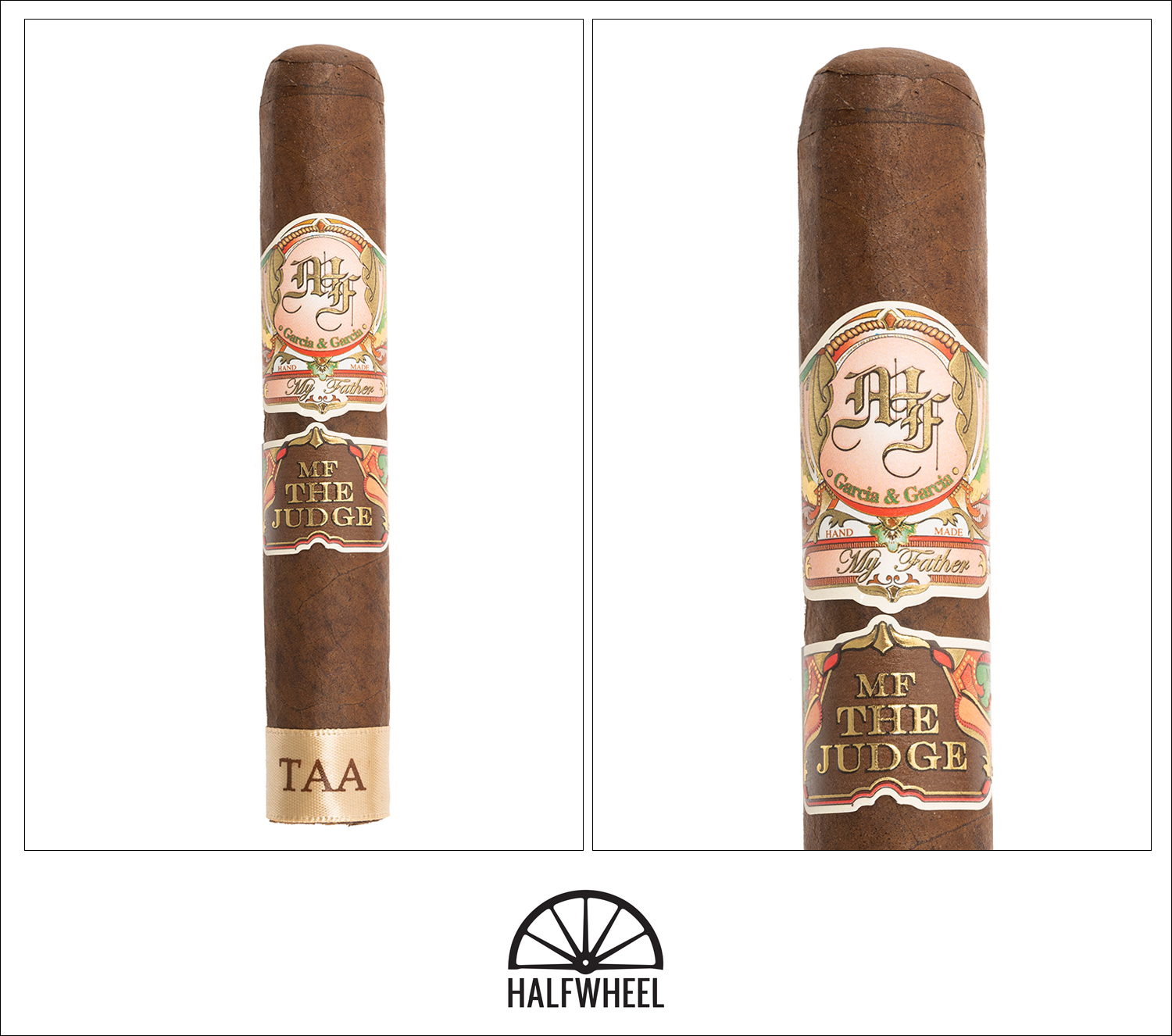 Visually, the My Father The Judge TAA Exclusive 2020 features some fairly distinctive attributes, starting with the foot ribbon with the TAA initials. The wrapper has a reddish-tinged, dark espresso brown color and is smooth to the touch with quite a bit of oil. In addition, there are a number of very prominent black veins bulging through the wrapper and can be found running up and down the cigar. The aroma from the wrapper and foot is a combination of strong dark chocolate, nutmeg, peanut shells, hay, popcorn and earth, while the cold draw brings flavors of sweet leather, gritty earth, tobacco, tree bark, hay, espresso, slight raisin sweetness and significant amounts of both black pepper and spice on my tongue.

Starting out, The Judge TAA Exclusive 2020 has some extremely bitter espresso on both the palate as well as a significant spice on my tongue, both of which begin to fade after about 10 puffs, leaving behind a gritty earth as the dominant flavor interspersed with lesser notes of leather, charred steak, bitter dark chocolate, almonds and popcorn. The raisin sweetness from the cold draw is noticeable on the retrohale, but it is mostly overwhelmed by the black pepper that is also present. Construction-wise, the draw is excellent after a simple straight cut, and although the burn needs to be corrected virtually out of the gate, it gives me no issues after that. The smoke production coming from the foot of the cigar is about average, while the overall strength is showing early signs of being a significant player by coming close to the medium mark by the end of the first third.

Thankfully, both the black pepper on the retrohale and the spice on my tongue have faded quite a bit as the second third of The Judge begins, allowing just a bit more of the raisin sweetness to become noticeable in the profile, albeit still not nearly enough to make a huge impact. Unfortunately, the dominant flavor continues to be the same fairly standard gritty earth note, while other flavors of charred meat, leather, hay, bread, cinnamon, generic nuts and a touch of floral flit in and out at different times. In terms of construction, the draw continues to be a shining light on the hill and the burn has evened up nicely, while the smoke production remains at a fairly moderate level. Strength-wise, the My Father The Judge TAA Exclusive 2020 easily crosses medium by time the second third comes to an end and does not seem to be slowing down anytime soon. There is no stopping the gritty earth note in the profile of The Judge TAA, as it remains as much the dominant flavor in the final third as it was in the preceding two thirds, followed by additional flavors of hay, peanuts, oak, charred meat, roasted espresso beans, leather, bread and cocoa nibs. However, there are a number of other major changes to the profile, including the amount of spice on my tongue—which has increased enough to hit levels not seen since the first third—and the black pepper on the retrohale, which is once again essentially drowning out the much-needed raisin sweetness. The draw continues to give me no problems whatsoever and the burn, while fairly wavy,  is easily good enough not to need attention with my lighter. Finally, the strength level continues to increase from where it was in the second third, coming very close to the full mark by the time I put the nub down with a bit more than an inch left. Lovers of gritty earth, charred meat and leather flavors in cigars rejoice: you have a brand new option to lust after. Unfortunately, the dominance that each of those flavors offers comes at a price, specifically the lack of almost any nuance or overt sweetness. While the construction was excellent in every way, the profile of the final third falls apart due to a combination of a just shy of full strength level and significant black pepper on the retrohale. In the end, the My Father The Judge TAA Exclusive 2020 is a textbook example of a cigar that sacrifices balance and complexity on the altar of boldness and strength.