It seems that every year brings about a slew of anniversaries being celebrated in the cigar industry and 2018 has certainly been no exception.

Among the companies celebrating milestone marks this year is My Father Cigars S.A., the company started by José “Pepín” García along with his son, Jaime, and daughter, Janny.

While that release celebrated a brand, this release celebrates the anniversary of the company, which was launched in 2008 as the family moved out onto its own into an operation that includes an extensive portfolio of brands, a huge factory in Nicaragua as well as a rolling operation in the Miami, Fla. area, and several farms that produce tobacco used in the company’s blend as well as its contracted brands’ blends. 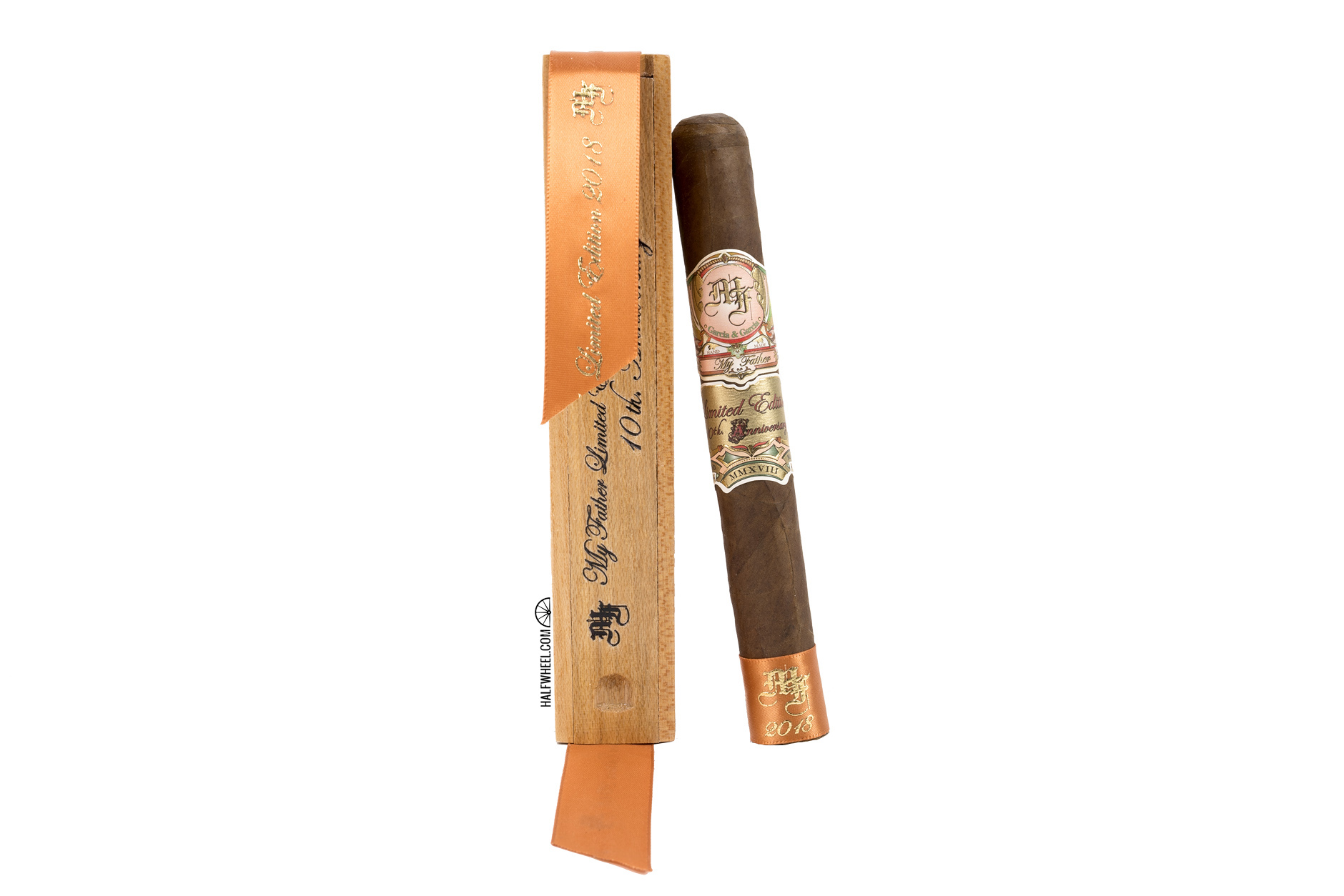 The cigar is a familiar size, a 6 1/2 x 52 toro that has frequently been used for single-vitola limited editions from the Garcías. It uses an Ecuadorian habano rosado wrapper over a dual binder of Nicaraguan habano and corojo 2006, as well as Nicaraguan fillers, which includes some of the highly sought after pelo de oro, leaf. The tobacco’s name means “golden hair” and is known for being a challenging varietal due to its propensity for mold, so much so that its growth has been banned in Cuba. It has been a tobacco that the Garcías reserve almost exclusively for some of the factory’s most special products. The company produced 2,500 individually numbered boxes of 14 coffined cigars for the release, a total of 35,000 cigars, each priced at $24 before taxes. The cigars began shipping in October. As with previous My Father limited editions, there’s a bit of formality with getting the 10th Anniversary ready to be smoked: opening the highly decorated box, selecting an individual coffin, sliding open the lid, removing the cigar from the coffin, sliding it from the cellophane and then removing the peach-colored ribbon with the My Father logo and 2018 in gold stitching that graces the foot of the cigar. The size should be nothing shocking to fans of the brand or those who have smoked such cigars before; the 6 1/2 x 52 toro has become a staple in the company’s repertoire for such releases. It wears two additional bands, the familiar pink-hued My Father core line band and a second, highly gold-hued band indicating the reason for the cigar’s creation. It’s a firm cigar, rolled rather firmly with very little give. While there are no outright visual imperfections, the oily wrapper leaf’s color can make the seam lines visible while some decently sized veins give it additional visual character. The caps are applied well, but one shows the marks of dried goma that has been used to adhere them on one sample. From the foot of the cigar there are very mild notes of dry tobacco, wheat cereal and similar grains and a bit of aging room wood, with sweetness and pepper not consistent among the three samples, as they were completely absent from the first cigar smoked, present in the second and third, with the latter an incredible graham cracker aroma. The cold draw is just a touch firm yet not concerning, offering a slightly sweeter spin on the above flavors with the cereal turning to soft bread which softens the overall impression, while a bit of creaminess works to nudge the profile in a similar direction.

The first puffs of the My Father 10th Anniversary Limited Edition 2018 deliver good amounts of smoke, which contains a bit of black pepper for the front portion of the tongue, while traditional Nicaraguan earthiness begins to emerge from a surprisingly creamy background. It’s not overpowering, but the stronger of the three samples do show a decent amount of pepper. By the time I tap the first clump of ash at about an inch into the cigar, the flavor and strength are both on the mild-plus side for my palate, which on the first sample instantly snaps my mind back to memories of other My Father limited editions that I have enjoyed due to their subtlety and nuance. I’m still surprised by just how creamy and mellow the My Father 10th Anniversary can be as it heads into the second third, showing just a bit of nutmeg and woody undertones and reminding me of a creamer-laden cup of coffee. The draw and burn have both been quite good with no issues thus far. The move into the second third is where the progression of the three samples really start to diverge as far as intensity; the first sample is still fairly mellow, while the second and third are medium to medium-plus strength. The second and third samples also pick up a very robust, dry black pepper that can grate the throat when it really lets loose. Through the nose, the cigar also shows a good amount of pepper, although it takes a few seconds after being passed through the nostrils to show its full strength, starting on the blunter side before unfolding into a multi-spoked tingling sensation. Just past the midway point, all of the three samples wake up a bit more thanks to the mixing in of pepper, a bit of dry wood that leans toward cedar and just a touch of earth. A bit of black coffee is soon to follow, and the result gets the tip of the tongue singing while the rest of the mouth begins to dry out a bit. At its best, the cigar flirts with a hearty, thick bread sweetness, a flavor that does an admirable job counterbalancing the pepper and pushing the profile into the deepest end of the pool that it has been in yet. The draw and burn are still fantastic, a good reminder of how well the My Father Cigars S.A. factory is at constructing cigars. 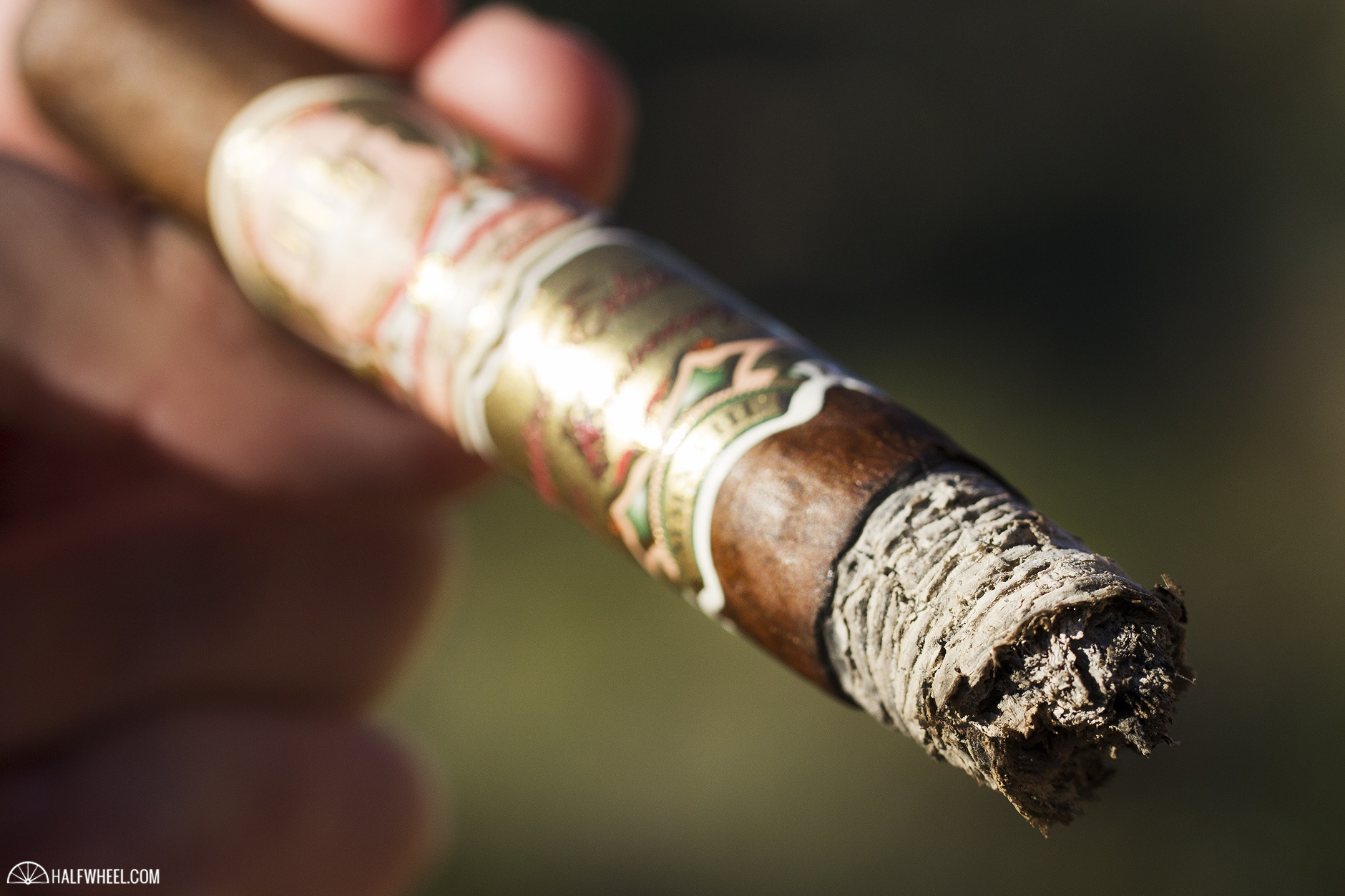 The final third of the My Father 10th Anniversary brings about the beginnings of the blend reaching its fullest levels yet, largely due to the increasing coffee flavor, as well as by way of the sudden arrival of rich black pepper on the retrohale. I find myself having to be mindful not to over smoke the cigar despite the temptation offered by the new flavor profile, as it can quickly turn bitter with added heat, leading the pepper to sting the lips with red chili pepper sharpness while charring the overall profile. In the second sample, the profile gets decidedly spicy, with a lip-tingling red chili note offering a lingering burn that is weighted by the Nicaraguan terroir has been showing in spades as of late. At its most stinging, it’s not really pleasurable—though it is memorable—as it begins to take the profile into an almost singular direction and sheds any complexity that the cigar had been doing so well displaying to this point. Slow smoking avoids most of the char problems until the very end of the cigar, when the heat becomes too much of an integral factor to mitigate. The cigar burns down to a very small nub of tobacco with a good draw, even burn line and plenty of smoke production. Whenever a new limited edition comes out from My Father Cigars, I automatically get high hopes for it, not only because of the track record of the company but because these releases have tended to show a much more complex and nuanced side of the company’s blends, often skewing into the milder side of the spectrum. My expectations for the My Father 10th Anniversary Limited Edition 2018 were quite lofty, and after three samples I’m not quite sure how they match up with the actual experience. The first cigar seemed to be almost perfectly in line due to a milder profile that balanced pepper and earth with creamy sweetness, while the second and third cigars seemed to be all about pepper and in particular, red chili peppers in the second half that did as much to elicit a physical reaction as it did to affect the flavor profile. It's much more than I was anticipating from the cigar's profile, and I'm not quite sure it's all for the better, as I'd rather be presented a deep, complex profile than one that is so upfront with pepper. A good cigar at this point that just didn't sit quite right with me from a physical reaction perspective, and one that I hope evolves into something that exemplifies the full capabilities of the Garcías blending capabilities.