At the 2016 IPCPR Convention and Trade Show, Drew Estate was showing off a very interesting project—one that combined two tobaccos that would on their own divide a group of cigar smokers almost right down the middle.

That cigar was the MUWAT Kentucky Fire Cured Swamp Thang.

Built off the Kentucky Fire Cured line, it uses a candela wrapper with part of the final third of the cigar covered in the regular fire-cured wrapper tobacco. It was certainly something a lot of people talked about at the show, and as expected brought the contrasting comments of people either excited for it or not interested in the combination.

While a lot of times the expectation of new cigars that debut at the show is they will ship shortly afterwards, though sometimes it takes significantly longer in reality for a full release. The MUWAT KFC Swamp Thang turned out to be in the latter group, with only a limited amount that was released at the Drew Estate Barn Smoker events and the wide release being pushed all the way to the end of April 2017.

On launch the Swamp Thang is offered in three regular production sizes. Candela wrapped cigars are usually visually interesting to look at, but, in addition, the MUWAT KFC Swamp Thang has the visual appeal of contrasting wrappers on the top and bottom, with the band covering the transition between the two. The candela part of the cigar is quite soft and smooth, almost like silk, while the fire-cured wrapper on the top has a more rough and tougher feeling. The aroma of the cigar is very pungent and is something I can smell before I even take it out of the cellophane. Once out of the cellophane however, the air around me is filled with smoky mesquite and hickory, with some musty wood aroma, a little bit of leather and the lightest hint of barbecue sweetness. The cold draw is a very specific and interesting flavor of hickory smoked chicken, and it’s quite strong and singular in nature, making sure not much else is tasted past a touch of pepper feeling on the tongue.

Starting into the first third it’s significantly less smoky than I thought it would be with a little of the hickory barbecue coming through and a little black pepper on the nose. There’s also a slight harshness to the profile, something that’s not overwhelming, but certainly there. Even after a fairly even light, the burn seems to start going awry quite quickly and requires a touch up after about an inch. The ash isn’t dense, nor is it loose – there are pieces that flake off but the bulk of it sticks on to around the inch mark. There is almost an artificial campfire note from the smoke coming off the foot, like one coming from a candle – it captures the essence, but not the reality of the smell. In addition if I concentrate really hard, it does appear there is a classic candela note back there of grassiness, but it is very faint. The second third continues much as the first, with a general hickory barbecue note up front, hints of black pepper and a very faint grassiness in the background. The burn has started to go completely haywire, with most of the Swamp Thang Toro going out and the remaining quarter burning a little tunnel before I notice what’s happened. After getting it going again it seems to be ok, though the harsh note that was just barely there before has grown to more of a harsh sour note. Interestingly enough though on the nose there is a hint of vanilla and a reduction of the artificial campfire note, making it a bit more enjoyable. Unfortunately the burn can’t stay on track, and requires another touch-up before I’m done with the middle portions. 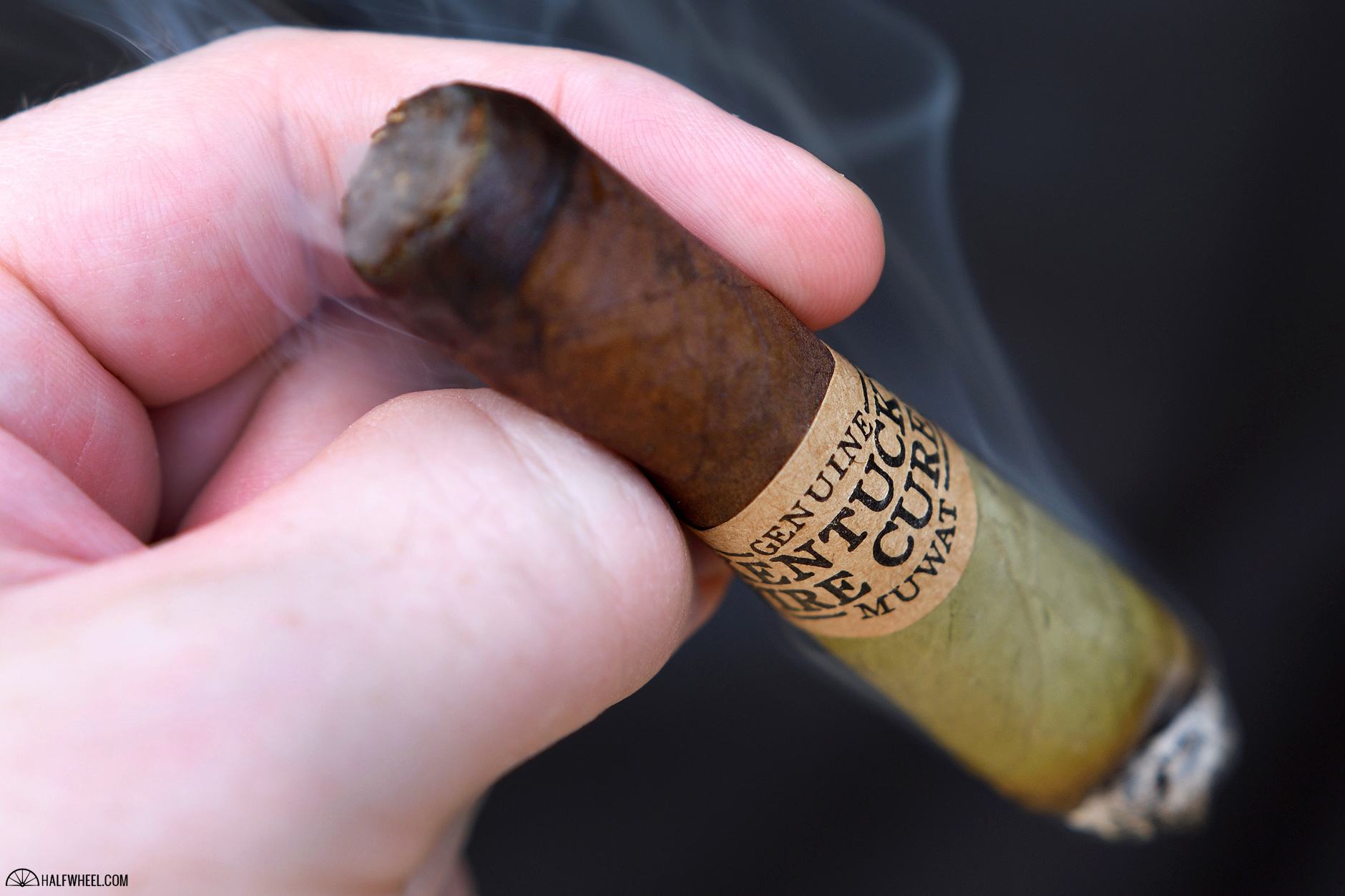 If there wasn’t a wrapper change in the final third there wouldn’t be much of anything new to report: more of the same profile, a continued sour note and more touch ups. However hitting the fire-cured wrapper at the end does change the profile slightly. It becomes earthier and more rich, with a bit more black pepper and some burnt brown sugar. Overall it’s quite an improvement, and is disappointing that there’s only a couple inches of it. After the transition the Swamp Thang does calm down a little, and thankfully ends more smoothly, which brings a nice finish to the cigar. At the 2016 IPCPR Convention and Trade show one of the cigars I was most eager to try was the MUWAT Kentucky Fire Cured Swamp Thang. I enjoy the regular KFC line and I like candela wrappers probably more than your average cigar smoker, though I wouldn’t say I’m obsessed with either of those specifically. Putting them together was a really interesting move however and it got me and many other people excited to try it. Once I did have the chance though, it wasn’t quite the experience I was hoping for. The persistent harsh and sour note throughout put a damper on the KFC smokiness, and the typical delicate candela notes were overpowered by the fire-cured tobacco used in the blend. Paired along with pervasive burn issues, it’s a cigar that I’m not sure I’ll be seeking out as a regular smoke. I certainly would like to see what some time does to the blend, perhaps smoothing it out a bit, but that's not going to fix the burn issues. As far as suggesting you try it, I certainly would say go try it for yourself as it’s a unique experience, but it’s not one I’ll be repeating again soon.