In December 2013, Drew Estate launched the first three vitolas of a new line of cigars under the MUWAT family, MUWAT Kentucky Fire Cured. The new line used a unique tobacco that is smoked over hickory, oak and maple wood as part of the curing process. 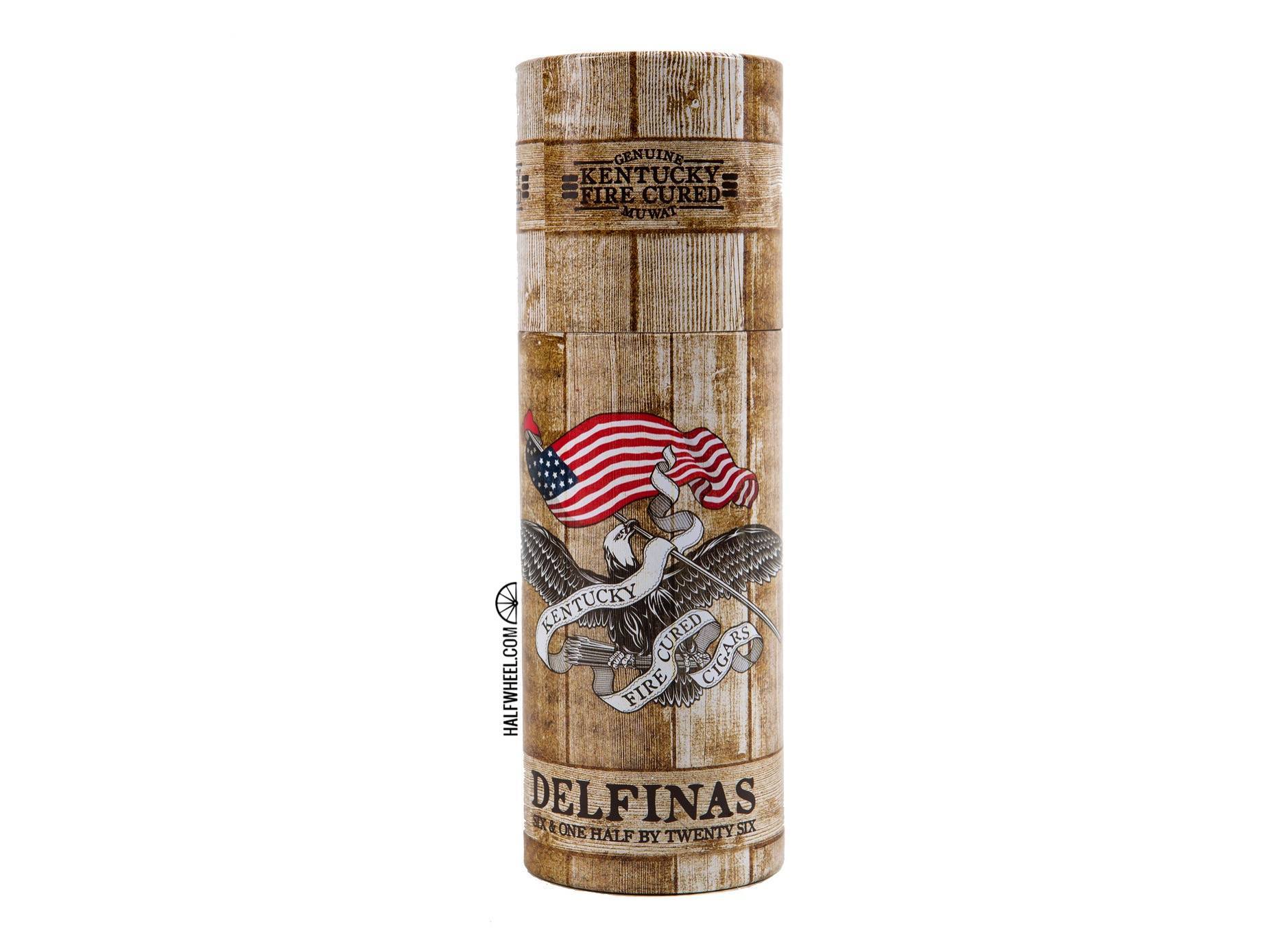 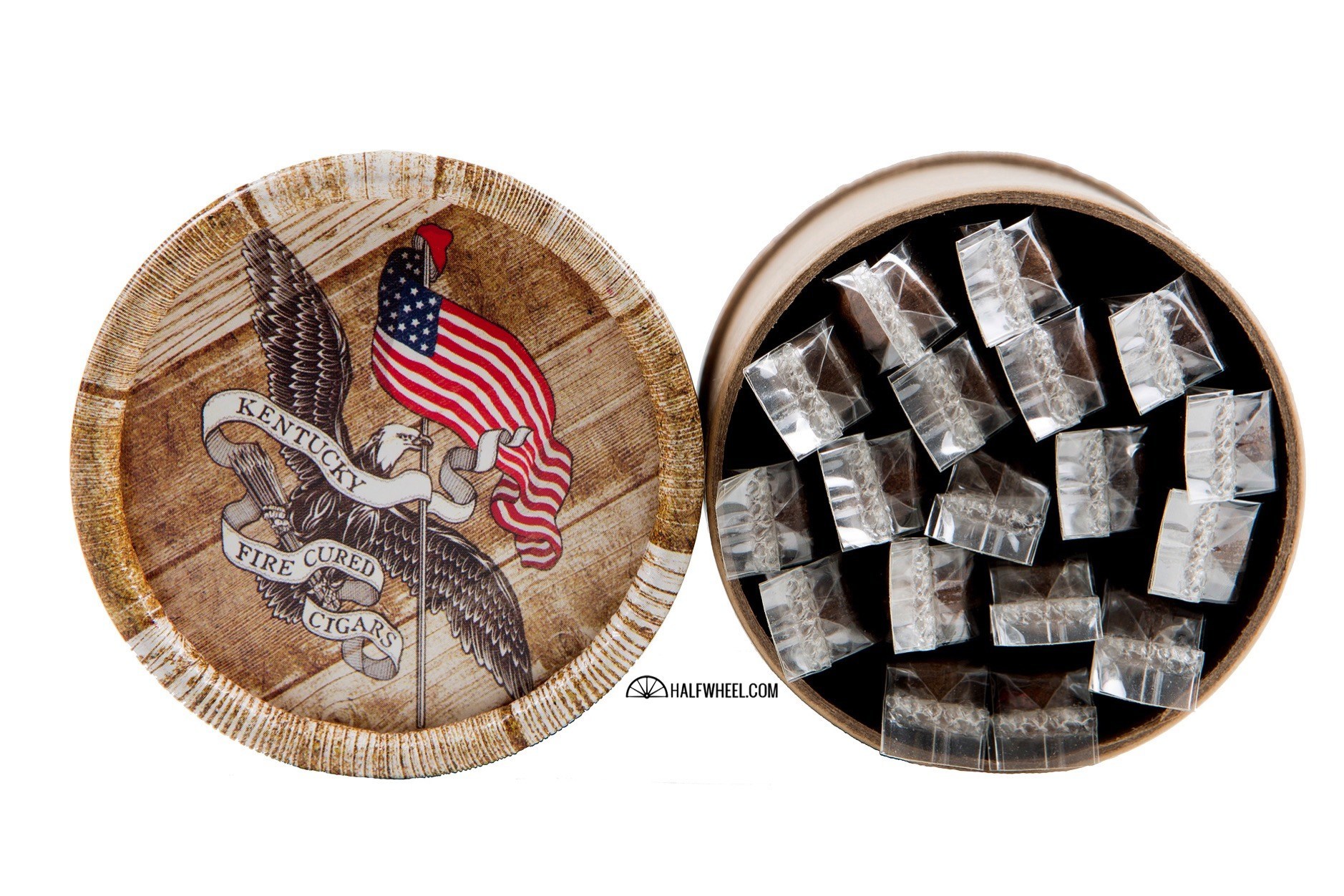 At 6 x 26, the Kentucky Fire Cured Delfinas has the smallest ring gauge of any of the seven vitolas in the line, and is priced at $6.20. Unlike the rest of the Kentucky Fire Cured line which are sold either in craft paper bundles of 10 or boxes of 12, the Delfinas is sold in a cardboard tube of 18, albeit still covered with labels that bring to mind classic Americana themes. Along with the Flying Pig vitola, the Delfinas is the only vitola in the line to be rolled at La Gran Fabrica Drew Estate, with the rest of the cigars in the line rolled at Fabrica de Tabacos Joya de Nicaragua S.A.

The press release shares some additional details on the history and the process used to work on the Kentucky Fire Cured cigars:

In development for over 2.5 years, this extension to the popular MUWAT line of premium cigars was inspired during a trip to the Dominican Republic where Jonathan Drew and Steve Saka were visiting the Universal Leaf tobacco pre-industry facility.

“I remember it as if it were yesterday” states JD. “Fritz Bossert (President of Universal Leaf), Steve Saka and I were smoking Liga Privada T52’s in the fermentation area when I noticed a pilon of Kentucky Fired Cured tobacco. We took the wrapper off the T52 and placed a thick Kentucky Fire Cured leaf in its place. The taste and aroma were simply amazing, but there was just one huge problem – the cigar would not burn properly, and is one of the reasons of the lengthy process it took to get ‘KFC’ to market.”

Nicholas Melillo, Executive Vice President of International Operations, was tasked with working on a solution to the burn issue in conjunction with Fritz Bossert, experimenting with using the fire cured leaf in the wrapper leaf position as well as using limited amounts as part of the filler.

Six months later we were already producing blends and sharing samples with good friends throughout the cigar industry, while keeping the project completely quiet.

“In February 2011 we had the pleasure of smoking some of these early samples on the Corona Cigar Co.’s Cigar Safari tour,” says Jeff Borysiewicz founder & owner of Corona Cigar Co. ”My group really enjoyed the aroma and flavor profile and kept asking JD when this product would be ready to market. He kept me waiting until December 2012, when we smoked more KFC samples at my lake house during the Christmas holiday. They’ve really come a long way and we look forward to the release.”

“The My Uzi Weighs A Ton brand was the first true collaboration between Drew Estate and Joya de Nicaragua,” says Michael Cellucci, President of Drew Estate.

“The Fact that JD wanted to bring the ”MUWAT” franchise under the flag of Subculture Studios is a reflection of his love of working with other talented cigar makers. Subculture Studios is more than just a graffiti factory in Nicaragua, it is a ‘mental space’ that JD and Jessi Flores have cultivated throughout the years and reveals innovation, raw talent and creativity that you find throughout all of Drew Estate at every level.”

There is a lot we have experimented with and all shall be revealed in short order, but for now here is a little quote from Nicholas Melillo, the King of Broadleaf, “First off, Kentucky Fire Cured is from a stalk-cut tobacco. The initial firing of KFC is done at low heat between 100 F to 115 F degrees and maintained until the color reaches solid brown. Once color is set temperatures increase to 120F- 130F to completely cure down the midrib of the leaf and darken. Once the midrib is dried the temperature will be reduced and the smoke maximized with saw dust to finish the leaf. When KFC hits your olfactory nerve you know it! “

“In addition to the fire cured tobaccos of Kentucky and Dark Fire Cured of Virginia, we are finishing the two year project of our fire cured tobaccos from another country which DE will not disclose until a time closer to the actual release of the brand. I’ll just say this: they don’t speak English, Italian or Spanish in this region of the world.”

Jonathan Drew wrote some additional information on the process:

KFCC is a pioneer brand to incorporate a very special tobacco type, called “Dark Fire Cured”, which comes from a special, proprietary tobacco seed, called KY190, Burley. After this seed becomes a plant and is removed from the farm, the real magic takes place – the barn curing. This curing process happens rapidly, under the smoking of woods, such as Hickory and Maple – allowing this special leaf to demonstrate a smoky and voluptuous character. The delays are do to the high humidity level of the leaf (caused by special fertilizers) as it blends with the traditional black air cured tobaccos.

There are seven vitolas in the Drew Estate MUWAT Kentucky Fire Cured line: 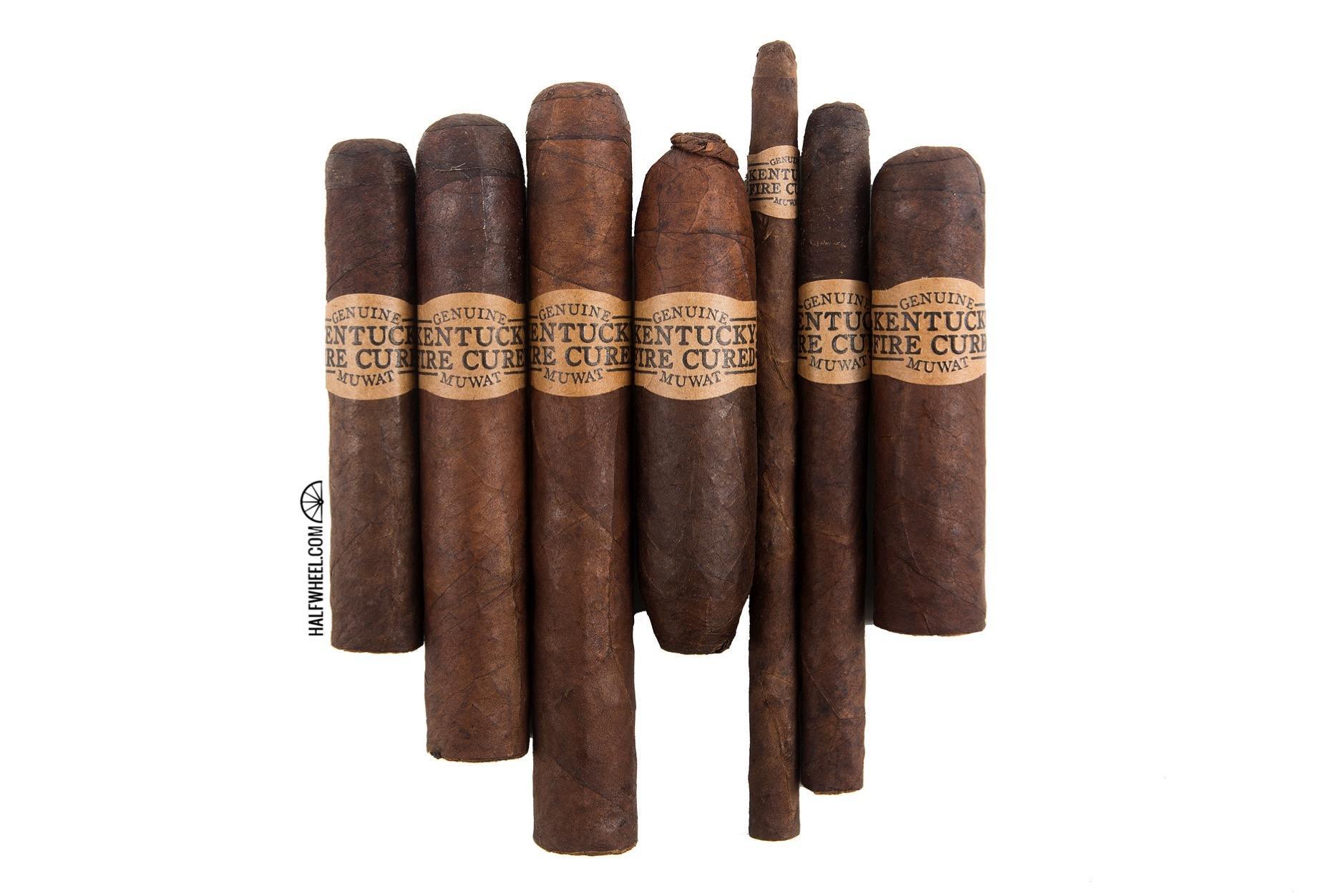 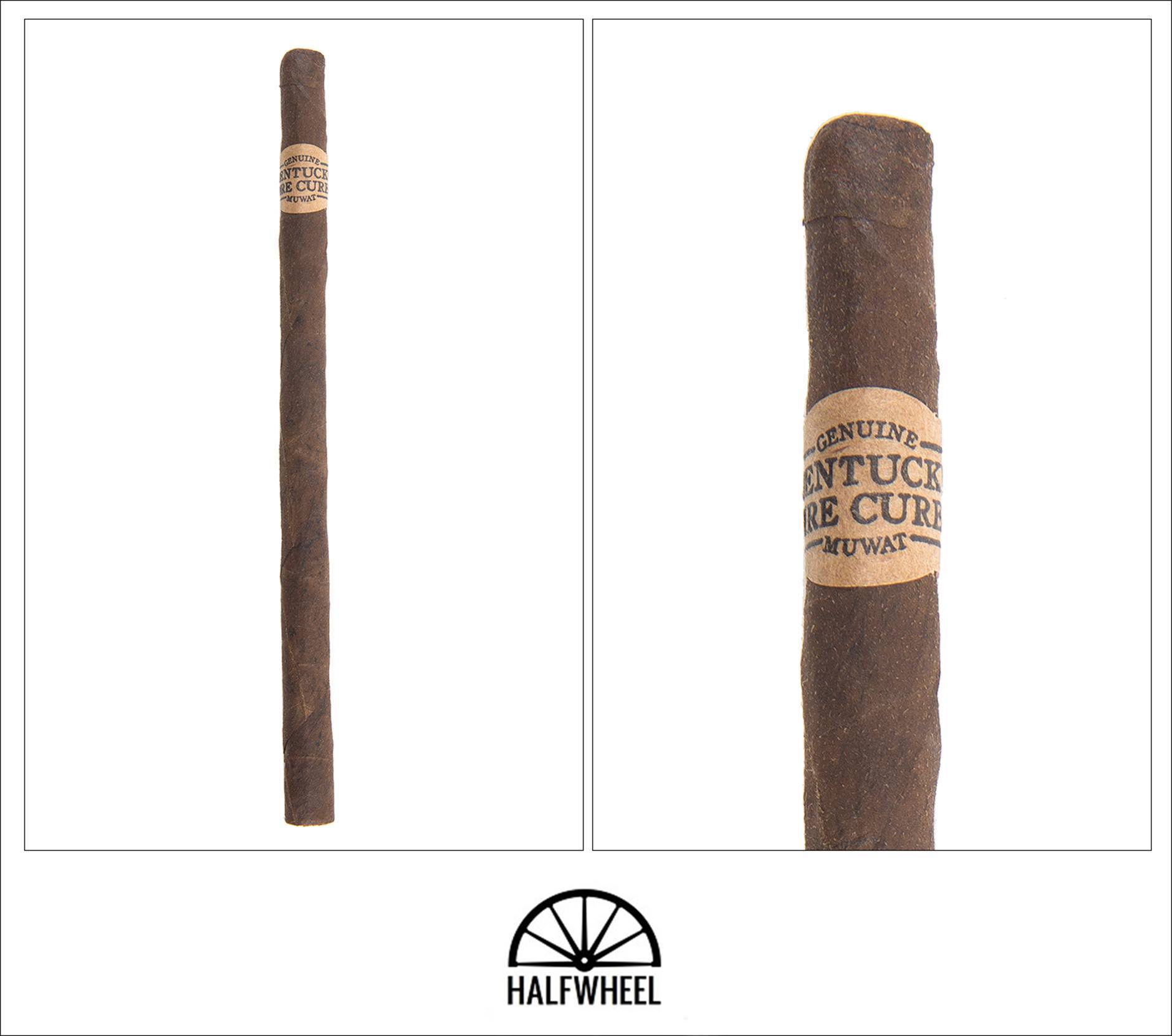 The first thing you notice about the MUWAT Kentucky Fire Cured Delfinas is the size: the ring gauge is astoundingly small, almost delicate in my hand. The dark mocha brown colored wrapper is extremely rough to the touch and features some very noticeable black splotches up and down its length. There is quite a bit of give when the cigar is squeezed, and there is a dark black leaf of tobacco that is quite visible on the foot. The aroma from the wrapper is a combination of strong peat, campfire, leather and sweet tobacco, while the cold draw brings flavors of barbecue, red spice, peat and hay.

The first third of the MUWAT Kentucky Fire Cured Delfinas starts out fairly mild, with sweet tobacco, creamy leather, earth and bitter espresso leading the pack of flavors. A smoky, peaty note is definitely present, but not near as aggressive as I expected from the scent coming off of the wrapper, and there is an interesting generic sweetness that I taste from time to time on the retrohale. There is just a little pepper noticeable on tongue and retrohale, but it does not seem to be getting any stronger as the first third comes to an end, and there is no spice present at all. The smoke production is enormous, and the draw is excellent with just the right amount of resistance, while the burn is giving me no problems at all so far. The ash falls in intact chunks every half inch or so and the overall strength is not a huge factor so far, ending the first third well below the medium mark. The profile shifts a bit in the second third of the Kentucky Fire Cured Delfinas, with an interesting beef jerky flavor taking over dominance, combining quite well with the other notes of earth, leather, charred oak and even a bit of clove. The amount of black pepper on the retrohale has increased noticeably and I am even getting just a bit of spice on my tongue every once in a while. The sweetness in the blend also increases and reminds me strongly of maple syrup, while the smoke production remains quite high. Construction-wise, both the burn and the draw continue to impress, with no problem on either one. The strength has increased, but not by much and hits a point just under the medium mark by the end of the second third. 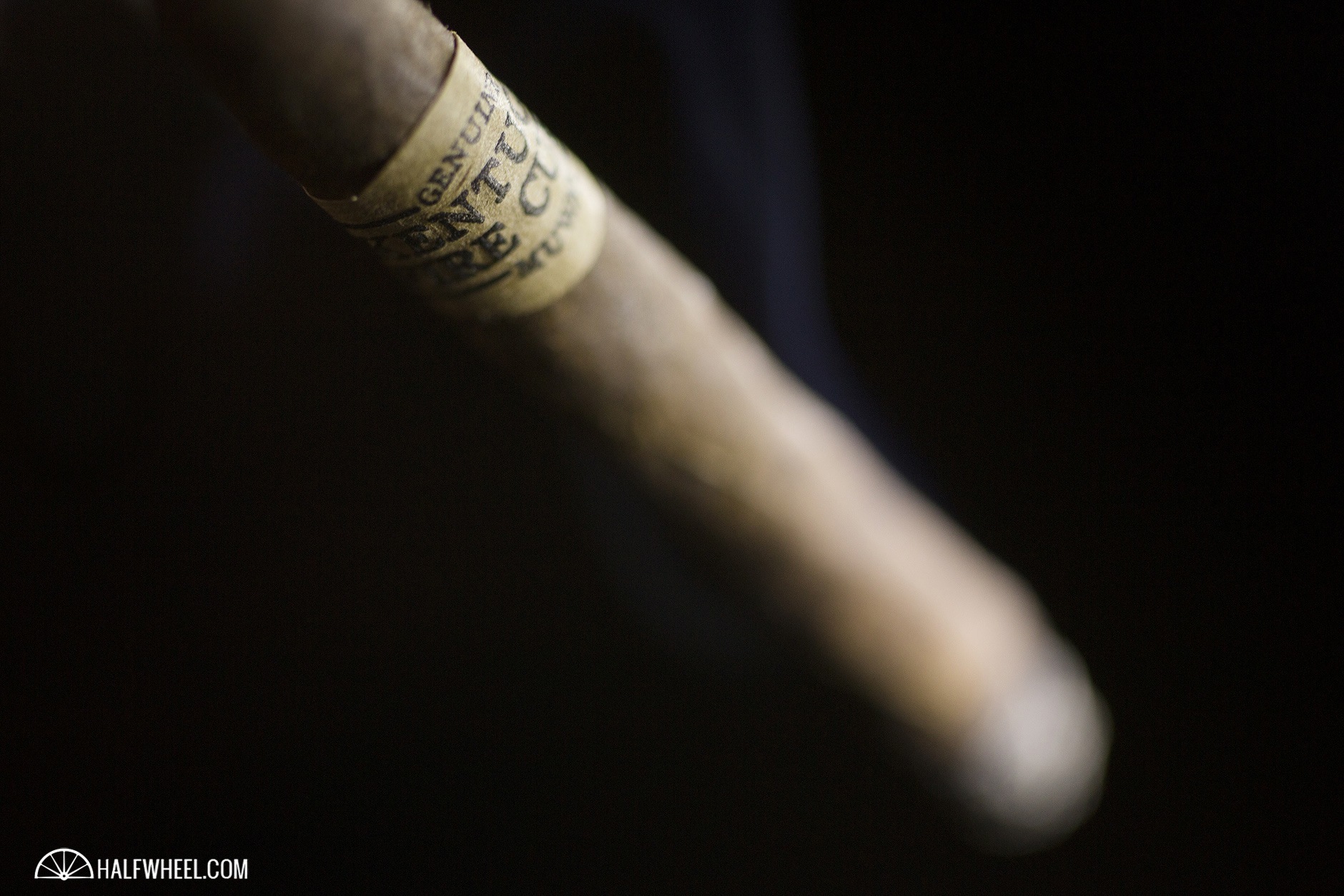 The dominant flavor in the final third of the MUWAT Kentucky Fire Cured Delfinas shifts again, this time to a combination of beef jerky and spicy barbecue, along with other flavors of bitter espresso, leather, earth, oak and a touch of a floral note that surprises me every once in a while. There is quite a bit more spice on my tongue, but surprisingly a significant decrease in the amount of black pepper on the retrohale as well. The sweetness has increased as well, still reminding me of maple syrup, and the smoke production remains quite high. The burn is razor sharp to the end of the cigar, and the draw gives me no trouble at all. Strength-wise, the Delfinas does manage to hit the medium mark — barely —but stalls out there, and I am able to smoke the cigar down to less than an inch before putting down the nub. Having smoked at least one of five different vitolas in the MUWAT Kentucky Fire Cured line, I can honestly say I was shocked at how much I liked the Delfinas vitola. The signature beef jerky/barbecue note that this brand is known for—and frankly, that is so prevalent in some of the other vitolas as to destroy virtually any other flavors that could possibly be present—is both understated and well balanced in this size, adding complexity to the profile instead of taking it away. The construction was excellent on all counts, with a razor sharp burn and a draw that feature just enough resistance. In the end, this is an easy cigar for me to recommend, especially if you had problems with the profile of some of the larger sizes of the Kentucky Fire Cured line as I did.