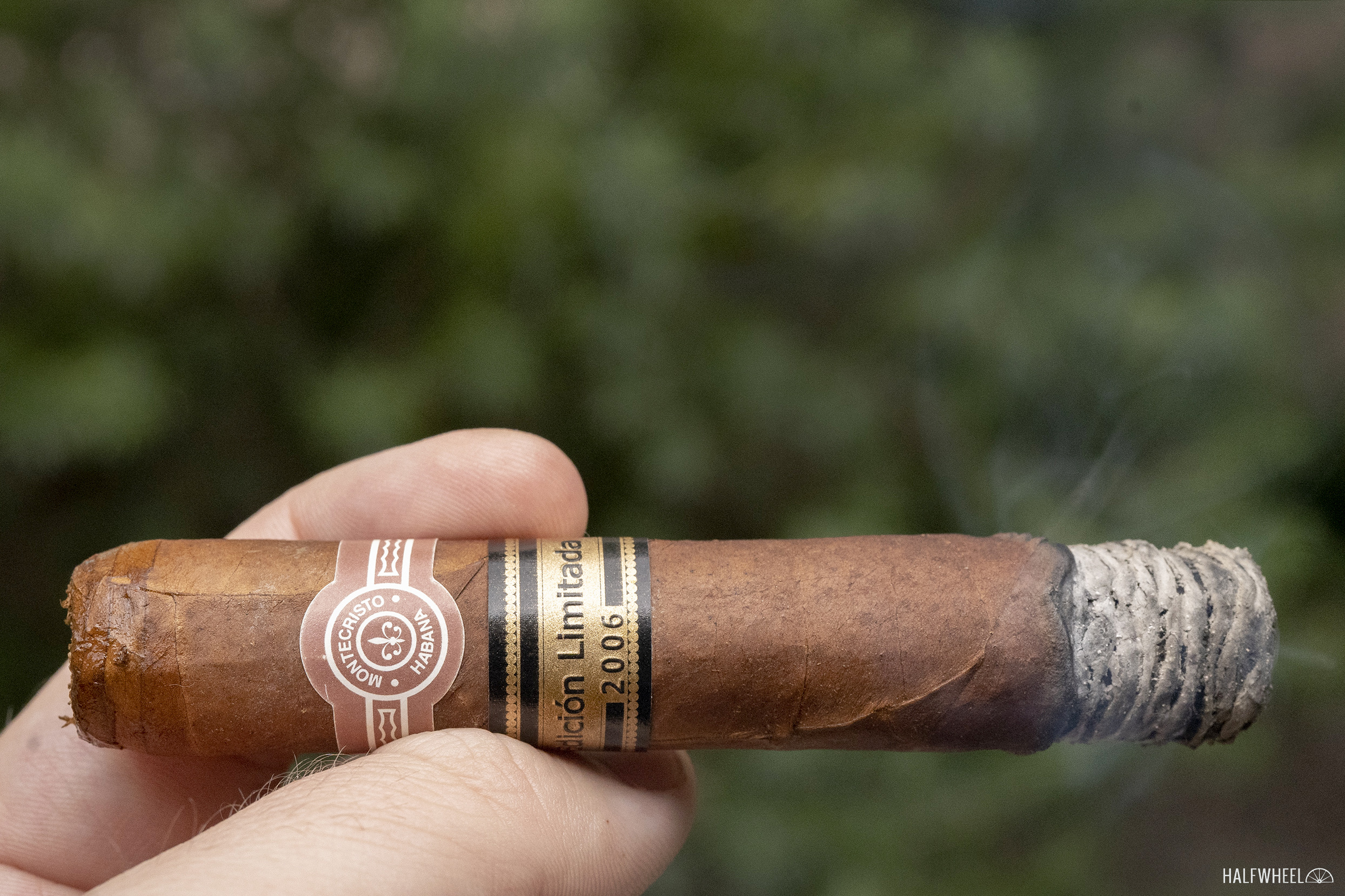 Twenty years ago, Habanos S.A. launched its Edición Limitada program, a new series of cigars that not only used aged tobacco, but utilized a vitola not found in A marca’s regular production offerings. As the name would imply the cigars were limited editions, though the number produced has rarely ever been disclosed.

The first five groups of Edición Limitadas were also notable as they would use darker than normal wrappers harvested from the upper primings of the plant that had been aged for two years, whereas the binder and filler weren’t explicitly aged longer than normal. Since 2007, all of the tobacco used in the Edición Limitada series gets two years of aging.

In 2006, Habanos S.A. celebrated the fifth anniversary of the program by re-releasing three of the most popular Edición Limitada releases to that point, the Cohiba Pirámides and the Partagás Serie D No.3, both of which were originally released in 2001, and this cigar, the Montecristo Robusto, which was part of the debut class in 2000.

The robusto vitola, measuring 4 7/8 inches (124mm) long with a 50 ring gauge, is one of the more common vitolas in the Habanos S.A. portfolio, yet the Montecristo marca simply did not use the size at the time. It—along with a number of non-regular production vitolas—had been used for the Reserva del Milenio and Siglo XXI Millennium Humidor releases in 1999, though both of those were limited editions as well.

It would reappear in 2003 via the Selección Robustos sampler, and the Montecristo name has since added a robusto to its regular portfolio, the Montecristo Open Master which was released in 2009 though is believed to be a different blend. Within the regular Montecristo line remains without the size, the closest thing being the Edmundo, which measures 5 3/10 inches (135mm) long with a 52 ring gauge. 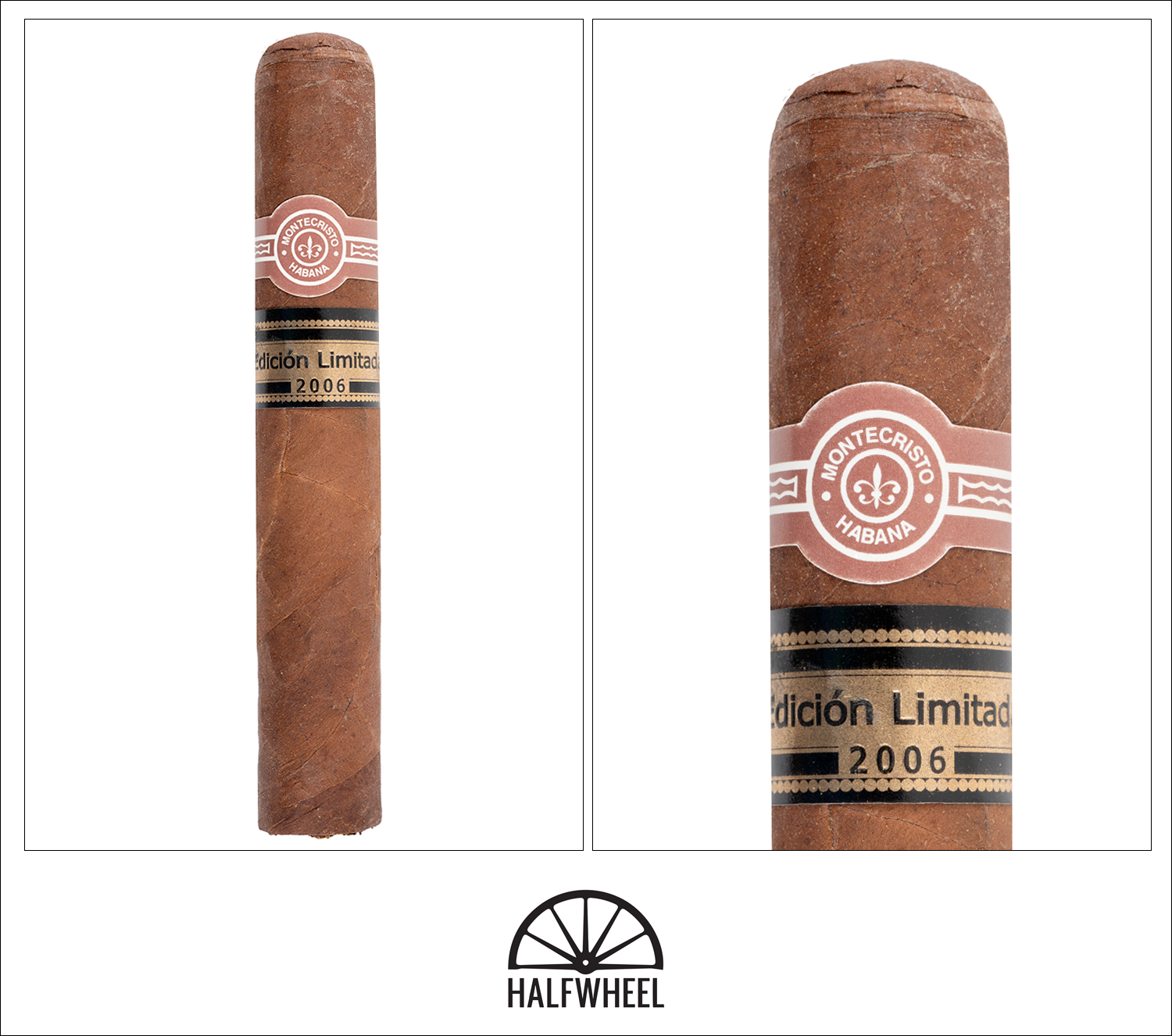 The Montecristo Robusto is an interesting looking cigar; I’m trying to excuse the age as much as I can, but in some ways it is hard not to look at it as a roughly 14-year-old cigar. It has a matte finish and looks almost completely stripped of oils, revealing a toothy and very veiny wrapper leaf that on one sample is notably lighter at the head than at the foot. Some samples also show a much more reddish-brown than I typically associate with Cuban Montecristos, while another sample almost looks dusty. It’s a fairly firm cigar and I’m wondering if it hasn’t lost some humidity seeing as how the bands move a bit more freely up and down the cigar.  The foot has a very soft aroma of leather, a bit of dry, thin wood that reminds me of kindling or even toothpicks, along with a bit of Irish butter for some oiliness and sweetness. The cold draw ranges from ideal to a bit firm, with the flavor much woodier, wandering into the territory of damp bark at times. There’s also a bit of Worcestershire sauce and just a pinch of black pepper, with an occasional flirting of sweetness.

The first puffs of the Montecristo Robusto Edición Limitada 2006 don’t immediately lead me to think that this cigar is almost old enough to drive as there is plenty of pepper for both the palate and nostrils. The cigar has a bit of familiar Cuban twang to it, with an interesting mix of notes contributing to that, making me think of steak sauces as well as a bit of soy sauce. One sample’s flavor is notably dry, driven by a dry wood with an aroma of an old fence, and the occasional bit of dustiness. It’s at the one-inch mark where the cigar begins to bring it all together—at least via the aroma—into something that smells like walking into a kitchen that’s been preparing dinner for several hours. The flavor could still use a bit of smoothing out, as white pepper has joined the fray and proves to be a bad pairing to what else is being offered. The flavor ranges between medium and medium-full depending on the sample and puff, body is medium-full and strength is medium-plus. The technical performance has been very good with an effortless draw, plenty of smoke and generally even burn line.

In the second third, the smoke gets noticeably warmer, even becoming hot at times. With that comes some irritation in the throat, just past what I would consider the apex of the passageway. The second sample continues to have a much drier smoke, which when combined with the pepper produces an interesting physical sensation on the taste buds. It’s not quite drying my mouth out as much as I’ve had other cigars do, though I’m glad I have some water nearby. Once past the midway line, I begin to get a bit of creaminess that eases the sensation, though it is not consistent across the three samples, which is disappointing. In fact, it’s in the second third that I realize that while there are some similar trajectories for the three samples, there are some noticeable differences, enough that if smoked completely blind I might consider them three different variations on a blend concept. The technical performance is the most consistent thing of all, as the cigar burns beautifully with plenty of smoke and a burn line that while not perfect, doesn’t require assistance. Flavor and strength have both backed off just a bit, now sitting at medium to medium-plus, while body is still medium-full.

If the first third of the Montecristo Robusto showed the cigar had plenty of life left in it, the start of the final third doubles down on that. White pepper takes over that part of the profile, while there is some more consistent dryness to the profile among the three samples. It’s a fairly bold and brash profile, one seemingly trying to defy its age and at times gets a bit disjointed. If there’s one thing that 14 years hasn’t helped, it’s the harmony of the flavors in the final third. Interestingly, a bit of simple syrup sweetness begins to the emerge in the final two inches or so, which is the first time I’ve noticed any attempt at sweetness. White pepper is quick to reestablish itself on the very tip of my tongue, delivering a near singular bit of stinging sensation. The three samples have all burned beautifully, with a razor sharp burn line, plenty of smoke production and no issues with the draw.

For a cigar that has 14 years of age on it, plus some additional age on the wrapper leaf, the Montecristo Robusto Edición Limitada 2006 smokes like a much younger cigar, with varying results. The first two thirds are quiet good, offering a fairly full-flavored start that begins some mellowing transitions and is capable of hitting some very enjoyable points along the way. The final third is less successful, becoming a bit disjointed in an attempt to build the flavor and strength back up, though it does show it seemingly has the capability of doing so, even if the results aren't great. The biggest take away from this cigar is that even with its age, it still has plenty fo deliver, and while the results may not be perfect, it is an interesting exploration of where this cigar is in its life. Were this a new cigar, I wouldn't have many reservations about picking a few more up to see if time smooths things out; knowing that these are as old as they are leads me to believe that they will continue to age well and might not hit their peak for several more years.