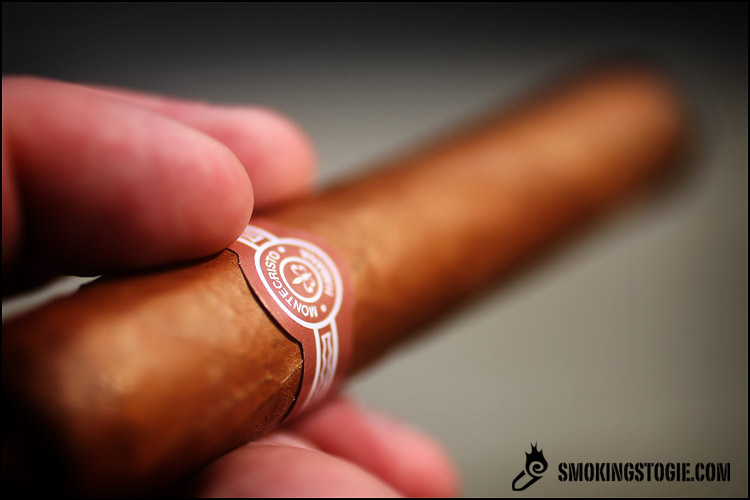 Released in 2005 as part of the Colección Habanos, there were only 500 boxes of 20 Montecristo Maravillas produced. It is a great looking cigar with a medium brown wrapper that actually has a major vein running down almost the entire length. The wrapper itself smells like a typical Cuban, a mixture of sweet hay and barnyard that is very identifiable. The cigar cuts easily and the draw seems perfect. The cold draw tastes like a great aged Cuban, hay, sweet etc. The cigar is a bit big in my mouth.

It lights very easily and I was hit with just a bit of spice and some sweet cedar, also the tiniest bit of hay as well. A fairly mild start, but not unusual with Cubans, of course. I am starting to get more of a wood flavor, but the spice has died down to almost nothing, still quite sweet and very creamy. The Maravilla is drawing like a dream, just the right amount of resistance so that you know you are smoking a cigar. The ash fell after about an inch.

We are just a little more than a third of an inch and the draw is still amazing. The volume of smoke coming out of this cigar has actually increased if that was even possible. The flavors have turned more sweet now with a bit of hay and some toasted nuts, somewhat tart. The burn has been wonderful for the whole stick, but the ash has not stayed on long. I am starting to get a bit more spice, albeit not that much, and the sweetness has receded, replaced by a not too strong cedar taste. Also tasting a very faint floral flavor and it is present in the smoke as well, but barely enough to even write down. As I said before, the burn is really quite good, great burn line and has given me no problems whatsoever. I am getting down to the end of this cigar and flavor-wise, it is mostly more of the same: cedar, a nice sweetness, creamy, nuts and just a touch of spice. It is still burning like a champ, although not quite as great as before, it is starting to wander a bit, nothing major and the sweetness is actually increasing. I am tasting something I can’t put my finger on, perhaps it will become more clear as we get to the end of the cigar. While it never got bitter there is definitely an increase in spice. Interestingly, there is also an increase in the sweetness coming out of this cigar and while I could not pinpoint what it was before, it increases enough that I could tell it was a flavor of honey, but I just wish there was more of it. This was a very good cigar, no doubt about that, but I could not help but think there was something missing. There were wonderful flavors and the burn and draw were nothing short of amazing, but it could have used a bit more spice or pepper to contrast the mildness. Since I just reviewed the AVO 22 (Euro), it is only natural that this cigar be compared to it and the bottom line is that the Montecristo Maravilla comes up short against it. Honestly, the Maravilla was just too large a cigar and I can't help but wonder what it would taste like if it was a robusto, or better yet, a corona gorda.