During the XIX Festival del Habano in Havana, Cuba, earlier this year, Habanos S.A. announced that it would be debuting three new vitolas under the Montecristo marca.

Dubbed Linea 1935, the new cigars are blended with tobacco from the Pinar del Río region in order to be the strongest Montecristo line on the market. In addition, unlike the regular Montecristo releases, each of the Linea 1935 vitolas has special secondary bands with the name of the specific viola included. While specific prices or a release date have not been announced yet, we do know that all three sizes are being packaged in boxes of 20. 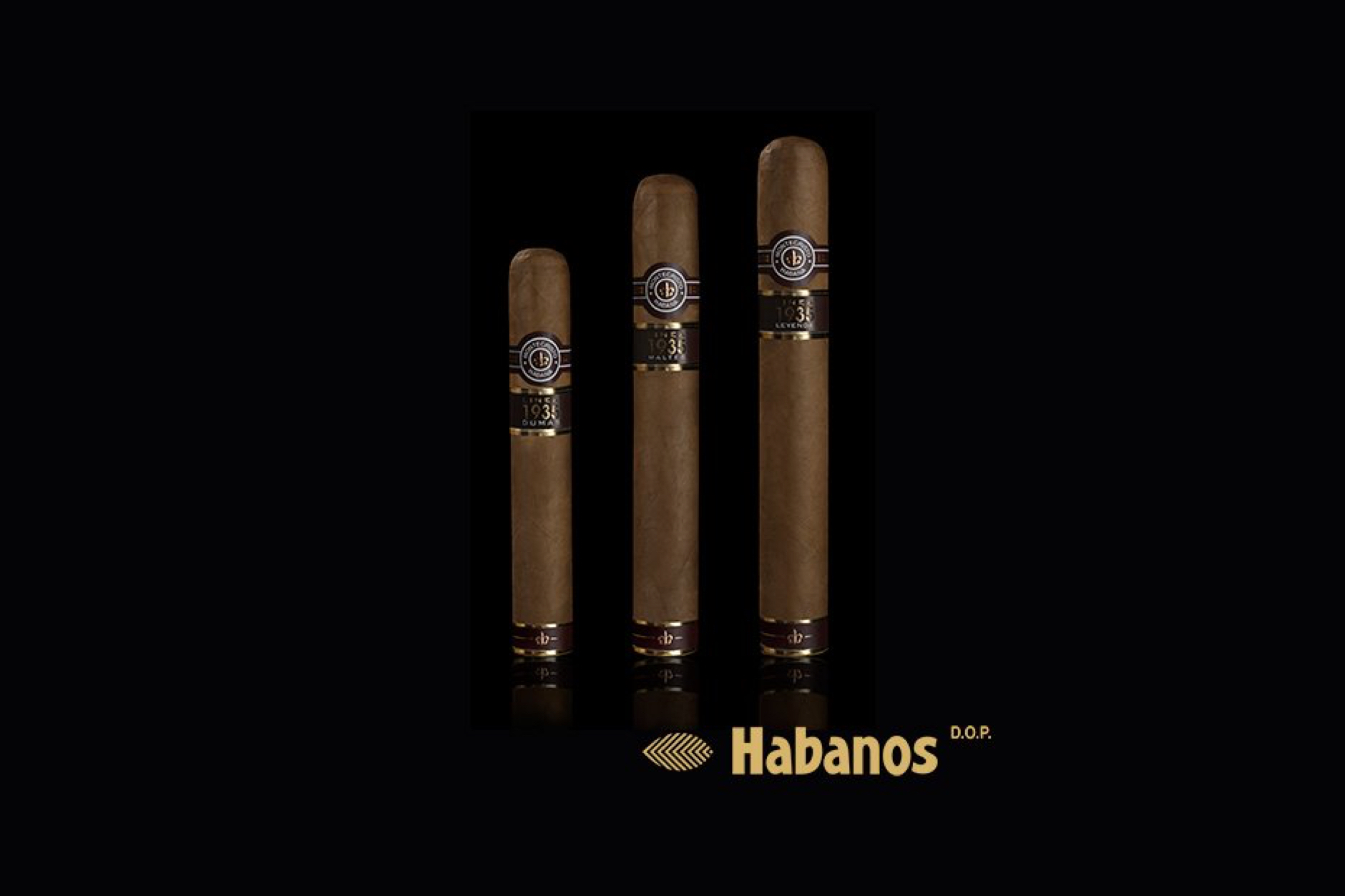 The three vitolas in the Montecristo Linea 1935 are:

A press release had more information:

The Montecristo marca’s name was taken from the famous 1844 novel The Count of Monte Cristo, and two of the new vitolas names take inspiration from the book as well: Dumas refers to the last name of the novel’s author, Alexandre Dumas; Maltés refers to the main character’s nickname in the book, The Maltese Sailor; while Leyenda is Spanish for Legend.

As for the 1935 part of the name, that refers to the first year in which Montecristo cigars were released. 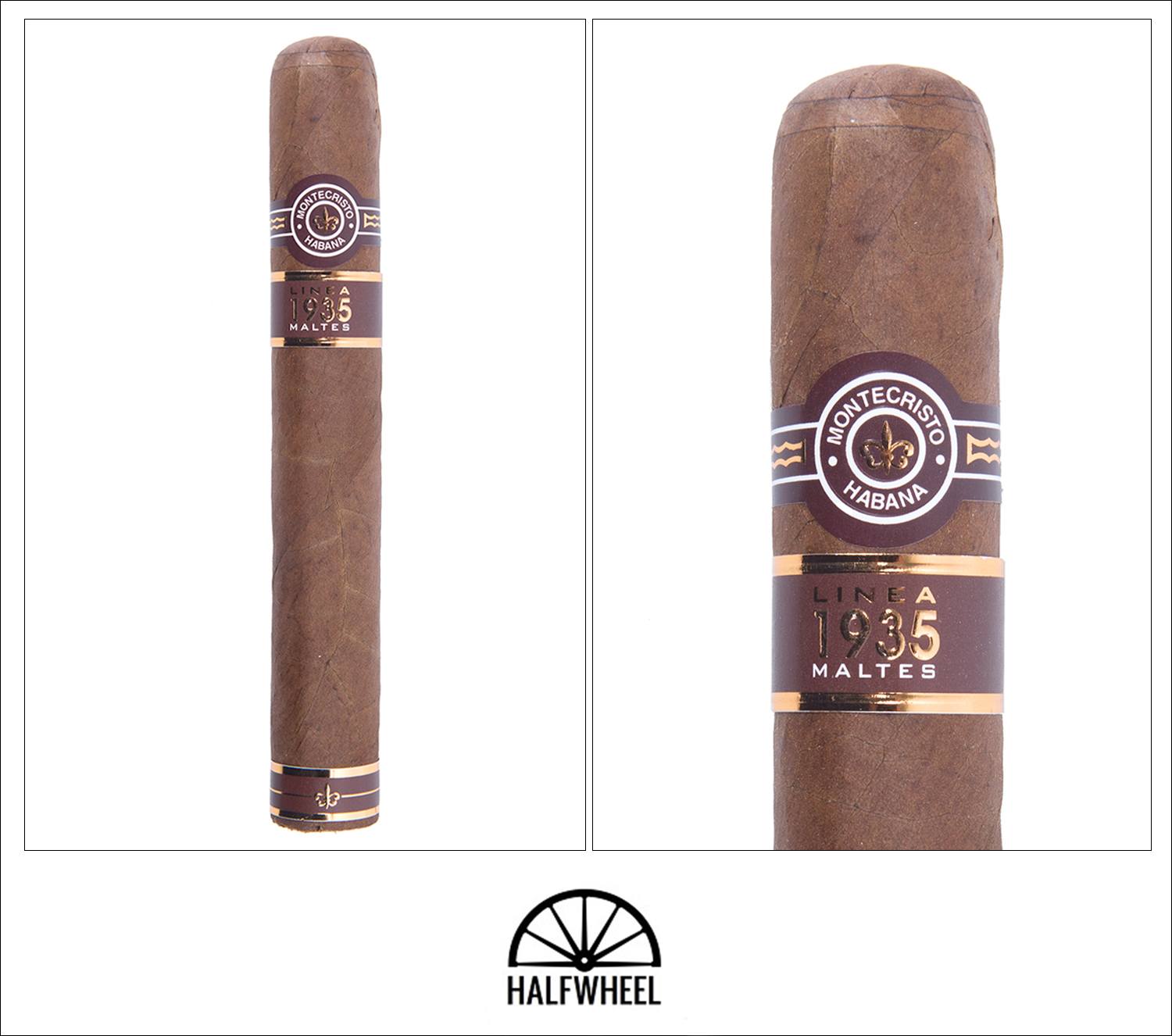 Visually, the Montecristo Linea 1935 Maltés is gorgeous with a honey brown wrapper that features just a bit of tooth as well as some very noticeable oil. There are veins running up and down the length of the cigar and I also notice a large soft spot about a quarter inch from the secondary band. Aroma from the wrapper is a combination of aged oak, earth, leather, manure, popcorn and vanilla sweetness, while the cold draw brings notes of strong hay, leather, ground coffee, orange citrus and slight black pepper.

The Montecristo Linea 1935 starts off the first third immediately with dominant flavors of both earth and dark cocoa nibs, followed closely behind by other notes of creamy oak, hay, leather, coffee beans and barnyard. There is some very obvious citrus on the finish, along with some distinct caramel sweetness on the retrohale that really sets each other off nicely. Construction-wise, both the burn and the draw are excellent so far, and the smoke production is massive off of the foot, although it starts to wane a bit as I get closer to the second third. The overall strength starts off halfway between mild and medium but quickly ramps up to close to medium by the time the first third comes to an end. 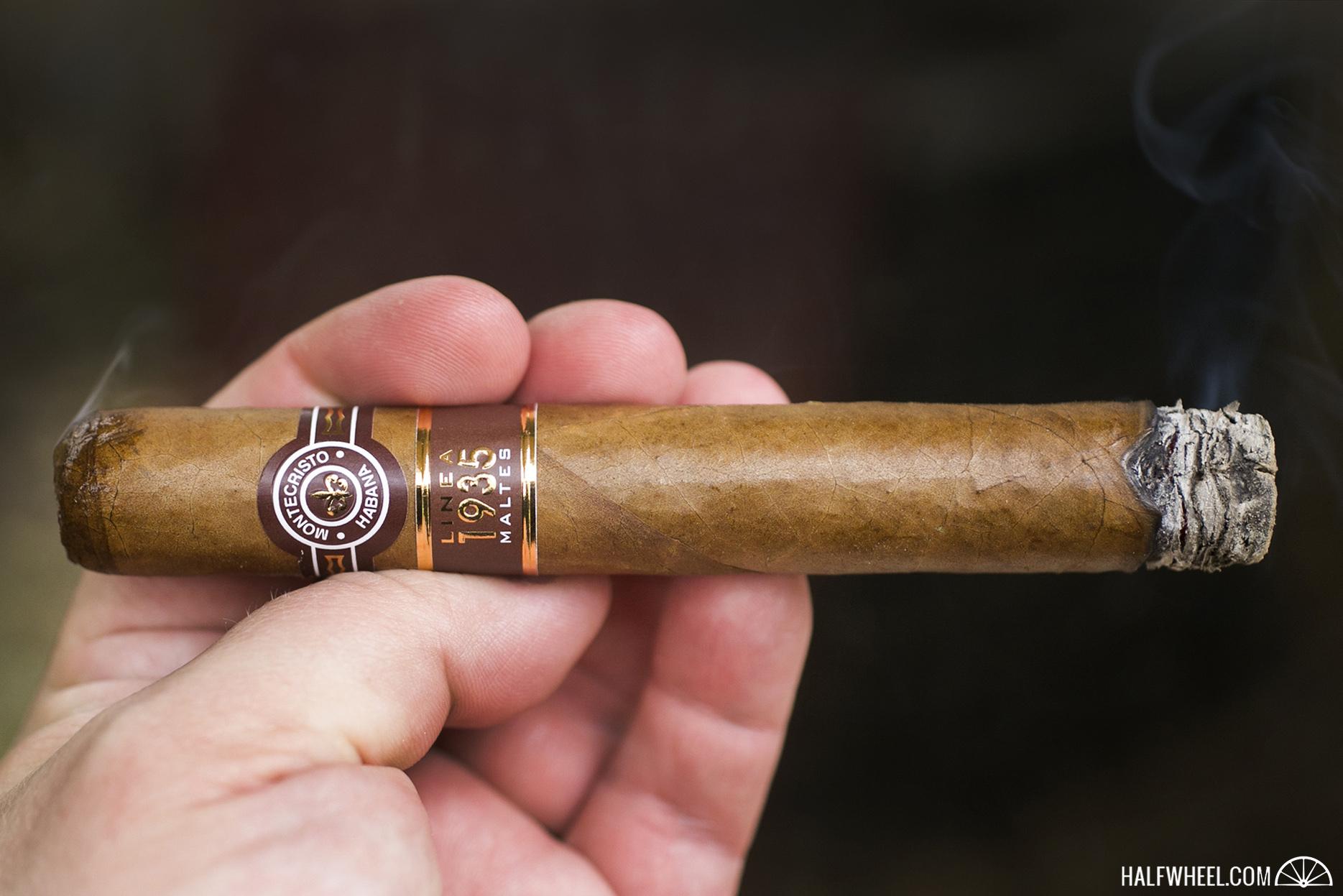 Both the citrus on the finish and the caramel sweetness on the retrohale continue to be factors in the overall profile during the second third of the Linea 1935 Maltés, but the dominant flavors have switched a bit, with a creamy oak note taking the top spot. Immediately following are flavors of peanuts, leather, ground coffee and earth, along with just a touch of white pepper that comes and goes. While the draw continues to impress, the burn has become just a little problematic, forcing me to touch it up once to prevent it from getting out of control, and the smoke production remains quite high. Strength-wise, the Montecristo Linea 1935 hits a solid medium by the midway point of the cigar, but seems to stall out there for the rest of the second third. 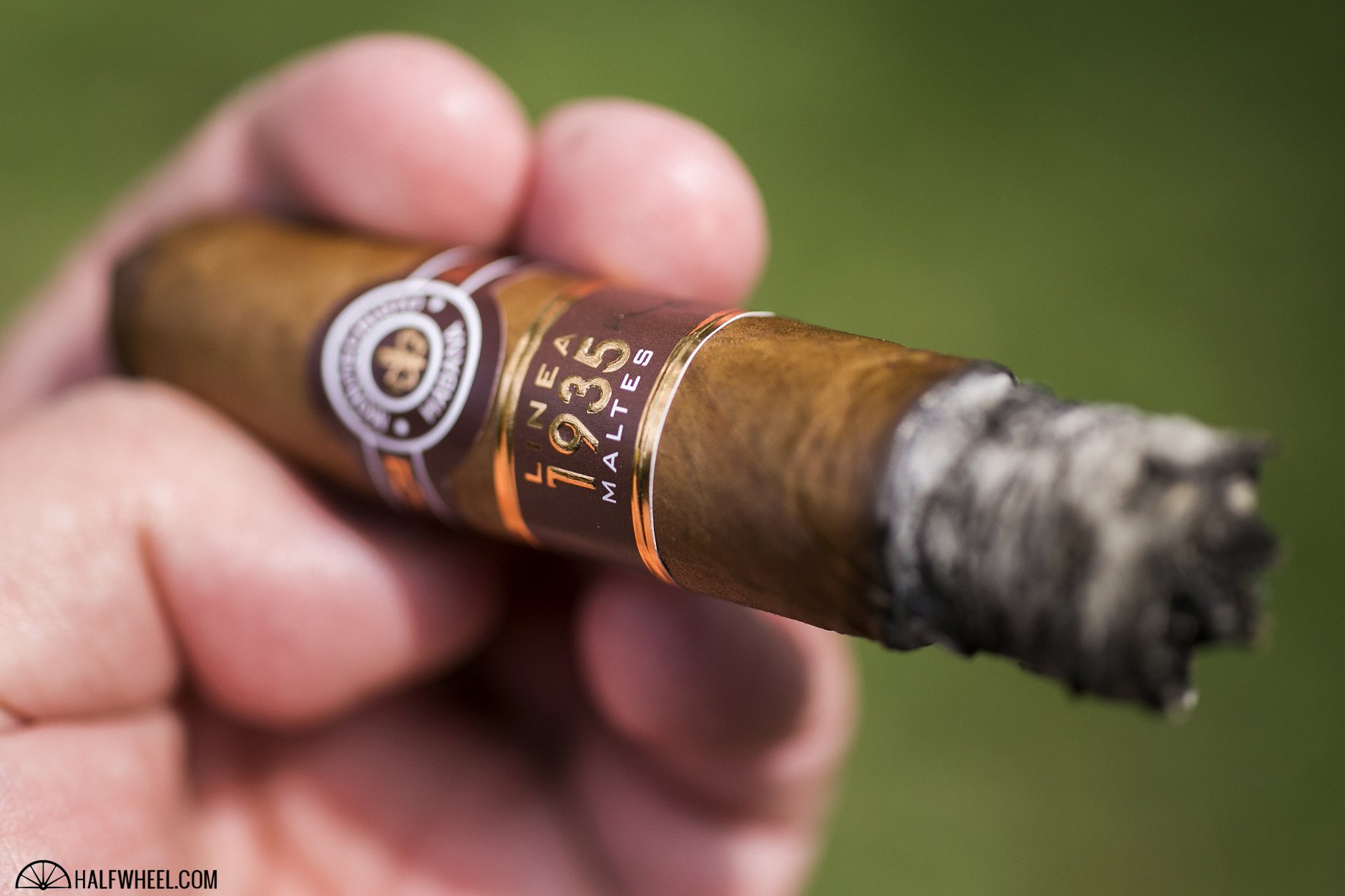 The final third of the Montecristo Linea 1935 seems to fall apart a bit in terms of the distinctness of the flavors, although it does the same creamy oak note from the second third still dominant as well as the citrus on the finish and slightly less caramel sweetness on the retrohale. There is still some black pepper in the profile, as well as other flavors of earth, tea leaves, peanuts, leather and coffee beans. The draw remains excellent, while the burn has evened out nicely and the smoke production continues to be well above average. The overall strength starts to increase up noticeably in the last inch or so, and does hit a point noticeably above the medium mark before I put the nub down with about an inch to go. 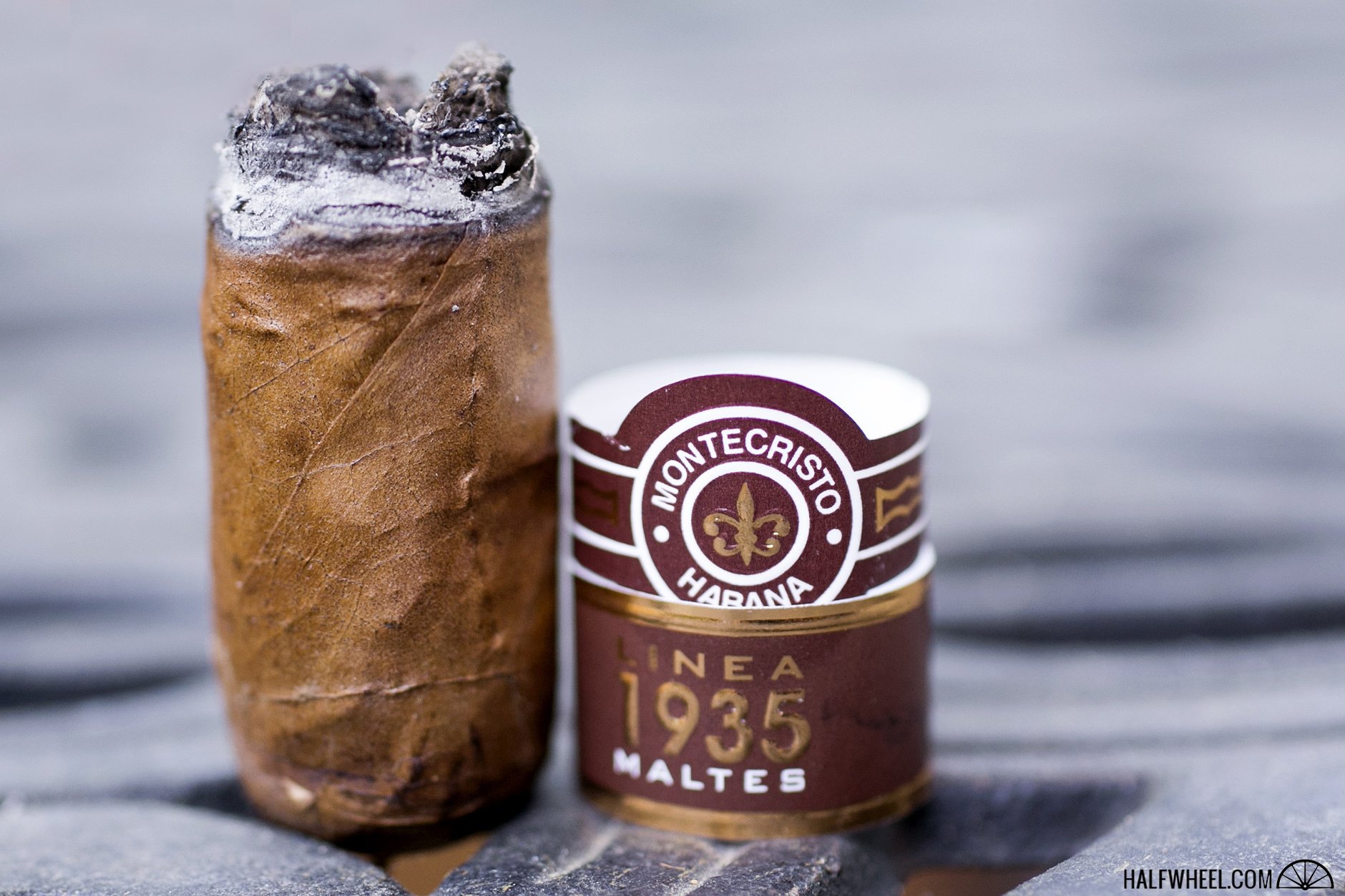 These reviews have been labeled as “preproduction” because there is likely to be a significant gap between when the cigars are reviewed and when they shipped. For reference, some cigars from last year’s Festival have still not been released. — CM.

It is safe to say that the cigars given out during the Festival del Habano can vary quite a bit from the final production versions, which can sometimes be released more that a year later. Having said that, the Montecristo Linea 1935 Maltés is a very good—but far from great—cigar that does live up to the billing of having a stronger profile than its brothers in the line. While it does show flashes of the classic Montecristo profile—including the notes of earth and caramel sweetness, along with a touch of black pepper—it also deviates quite a bit, including the citrus on the finish and the aforementioned increased strength. In addition, the flavors were a bit rough around the edges and a bit coarse on the palate, although the overall construction was close to perfect. While I learned long ago not to judge Cuban cigars based on preproduction samples, the Montecristo Linea 1935 Maltés I smoked is good enough for me to check it out when it is eventually released.