In January of 2015, Altadis U.S.A. released a new limited edition Montecristo called the Grupo de Maestros Private Batch. It was said to be similar to the blend that Altadis’ senior managers—dubbed the Grupo de Maestros—made for themselves. Not only was the blend supposed to be a special, full bodied release, but it came in a 100-count box that were made from the cedar shelves that the cigars aged on. 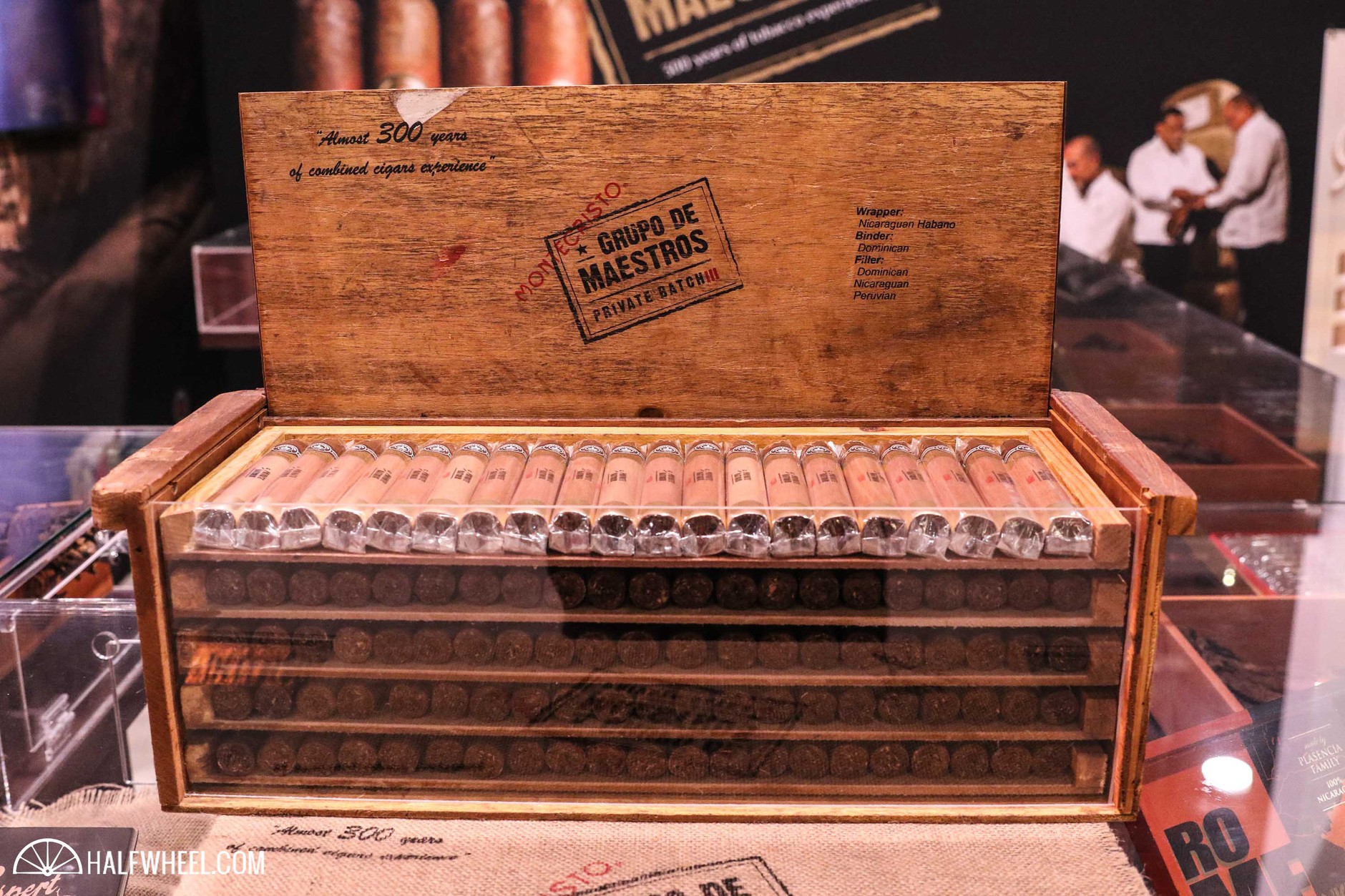 A second release happened in May of 2016, with the third and latest release being shown off at the 2017 IPCPR Convention and Trade Show. The first two years featured the same blend in two different sizes, while the third release was a new blend and a new size. While the boxes remained similar to the first two iterations, the cigars this year were wrapped in cedar and then put into cellophane. 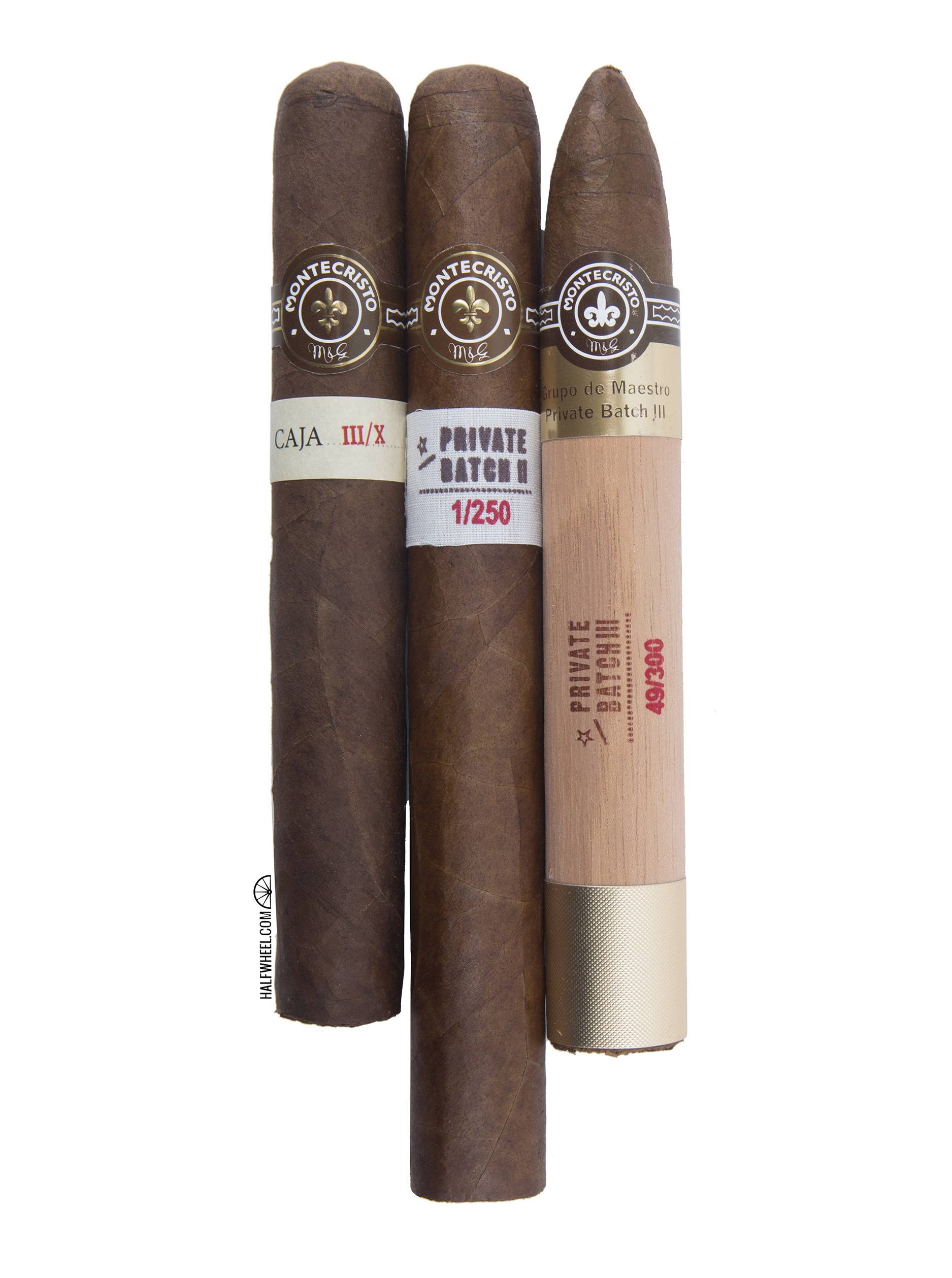 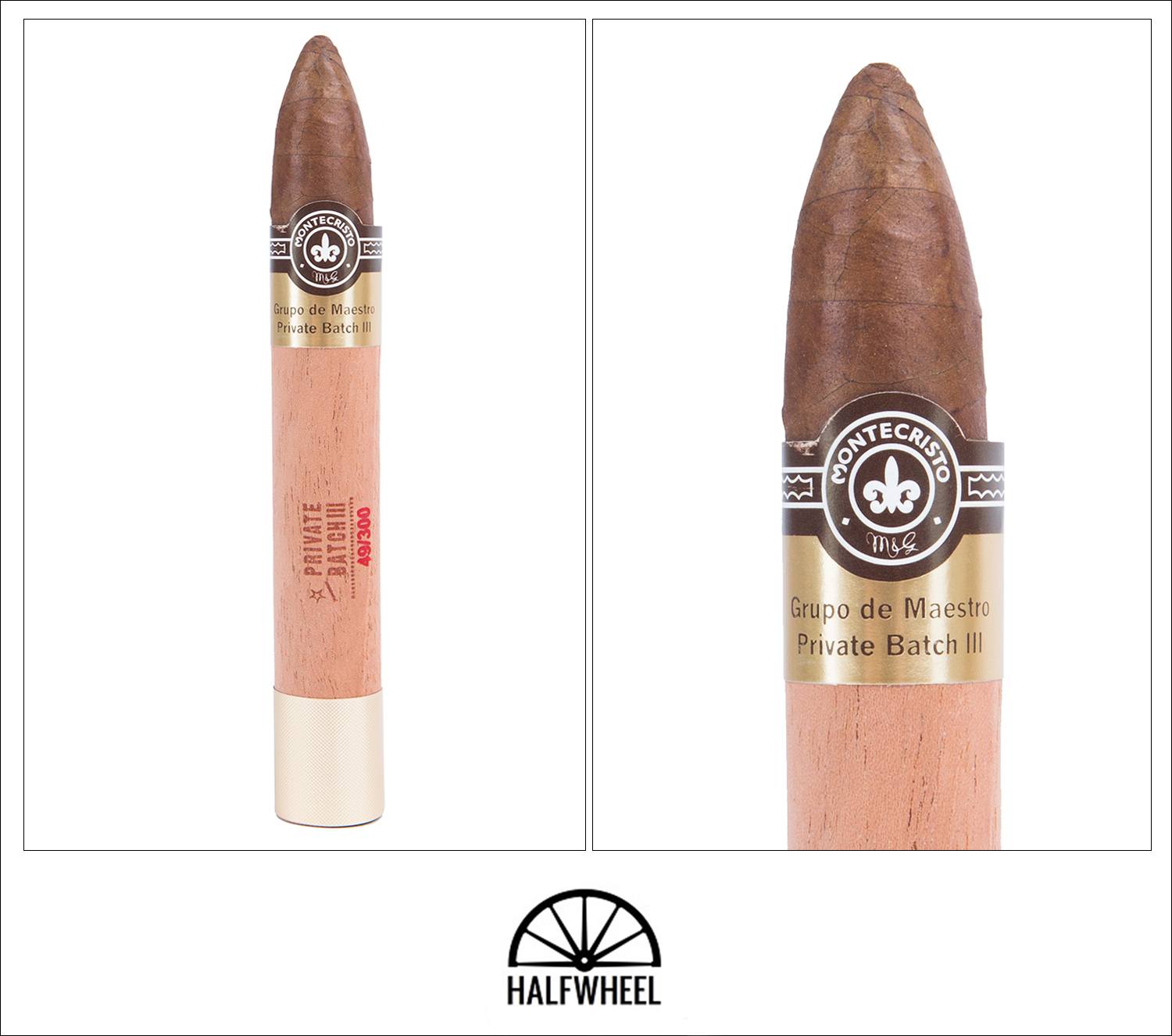 Once I get the cigar out of the tightly wrapped cedar sleeve, a very soft wrapper is revealed. There is some give to it when squeezed, with some random spots giving a little more than others. Coming off the bottom two thirds of the cigar is a heavy cedar aroma from the cedar sleeve, while the top of the cigar has a musty barnyard aroma, almost like wet leather, along with a touch of some sweet damp hay. The cold draw is quite nice, with a heavy sugary spice up front, some nuts, hay, a touch of fruits and some black pepper on the finish.

Starting into the first third black pepper dominates the profile, with some cedar, bread, spice and hints of cocoa and espresso try to make their presence known as well. About an inch in the pepper dies down significantly, leaving a much creamier and smooth profile that allows those background flavors to come out much stronger. The burn is less than ideal, with a very wavy burn line and a section that is wanting to burn much faster than the rest. Smoking the at a slow, steady pace doesn’t seem to help, and by an inch and a half in I’m forced to relight almost half of the cigar. So far the burn issues don’t seem to be negatively affecting the profile too much, with a continued creamy cedar, spice, pepper, cocoa and espresso melding nicely together. 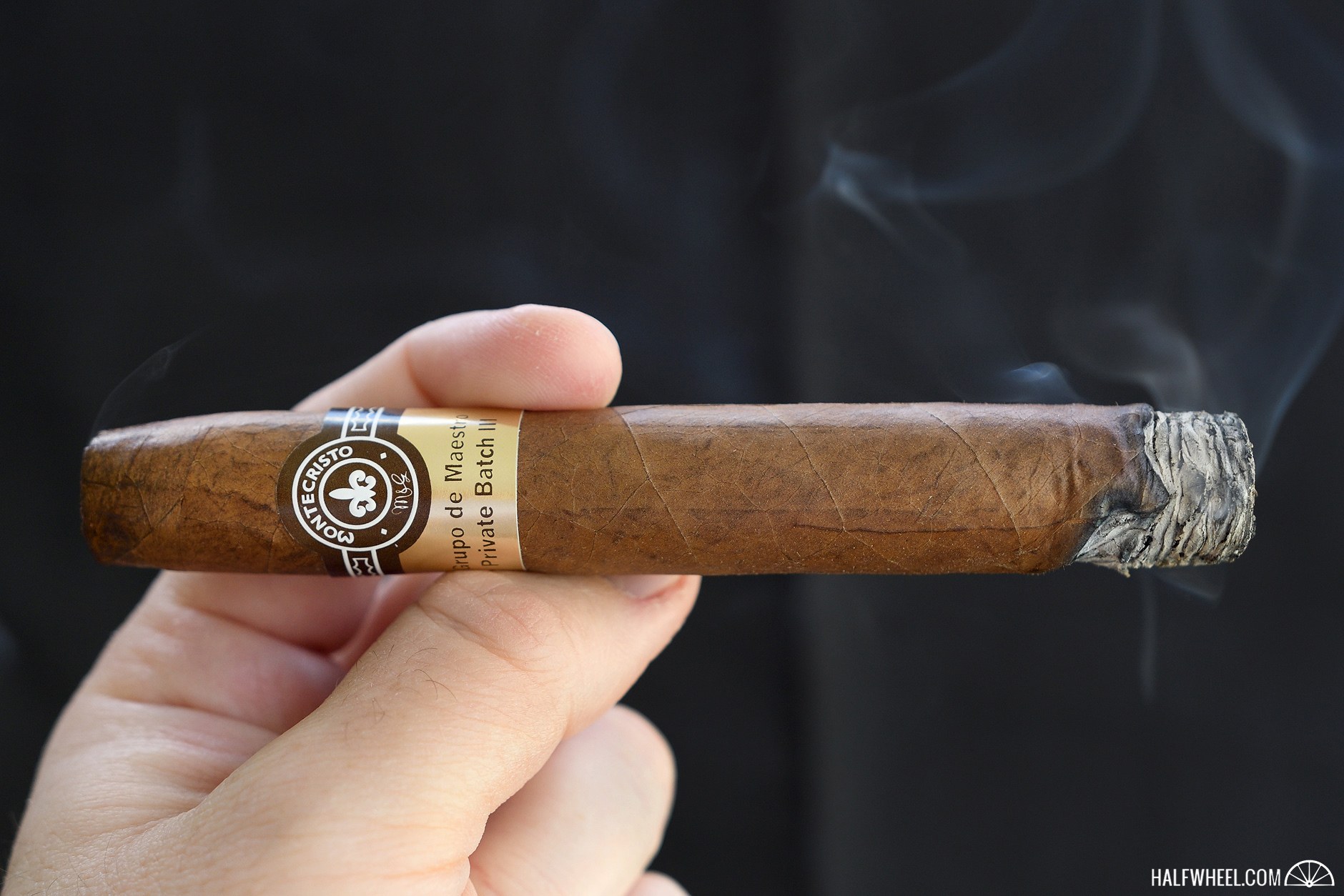 Moving into the second third the Montecristo Grupo de Maestros Private Batch III has mellowed out even further, getting to the point where I can retrohale a surprising amount of the smoke with very little of the expected peppery assault on my sinuses. Creamy cedar and spice continue to dominate the profile, a slightly more sweet cocoa and espresso are solid notes in the middle, while a touch of hay and some light pepper round out the background. The burn line has continued to deteriorate, with an entire half of the cigar needing almost constant encouragement from my lighter to keep up. It seems to finally be affecting the profile, which has shifted from a mellow, refined group of flavors to notes tinged by a harsh bitterness. 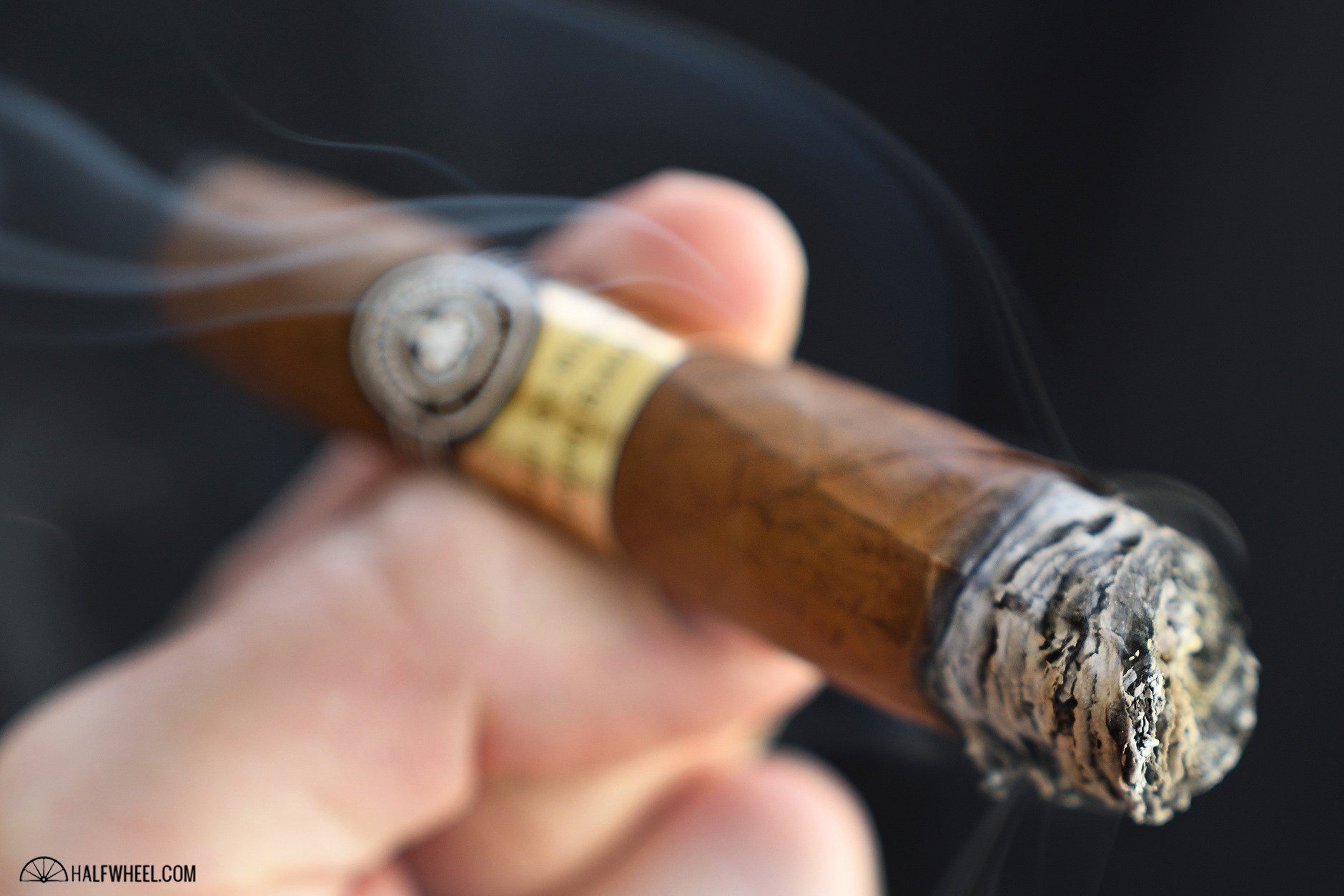 In the final third I start to experience an even further deteriorated profile, as it’s a constant battle to stay lit. The cigar seems to be severely underfilled in the final third, which along with some impressively bad tunneling has somewhat ruined the delicate profile that had blossomed in the second third. Hints of spice and cedar still are around, but the creamy smoothness of the profile is long gone. With a little over an inch left it’s almost impossible to keep it lit, at which point I finally give up and quit the Montecristo. 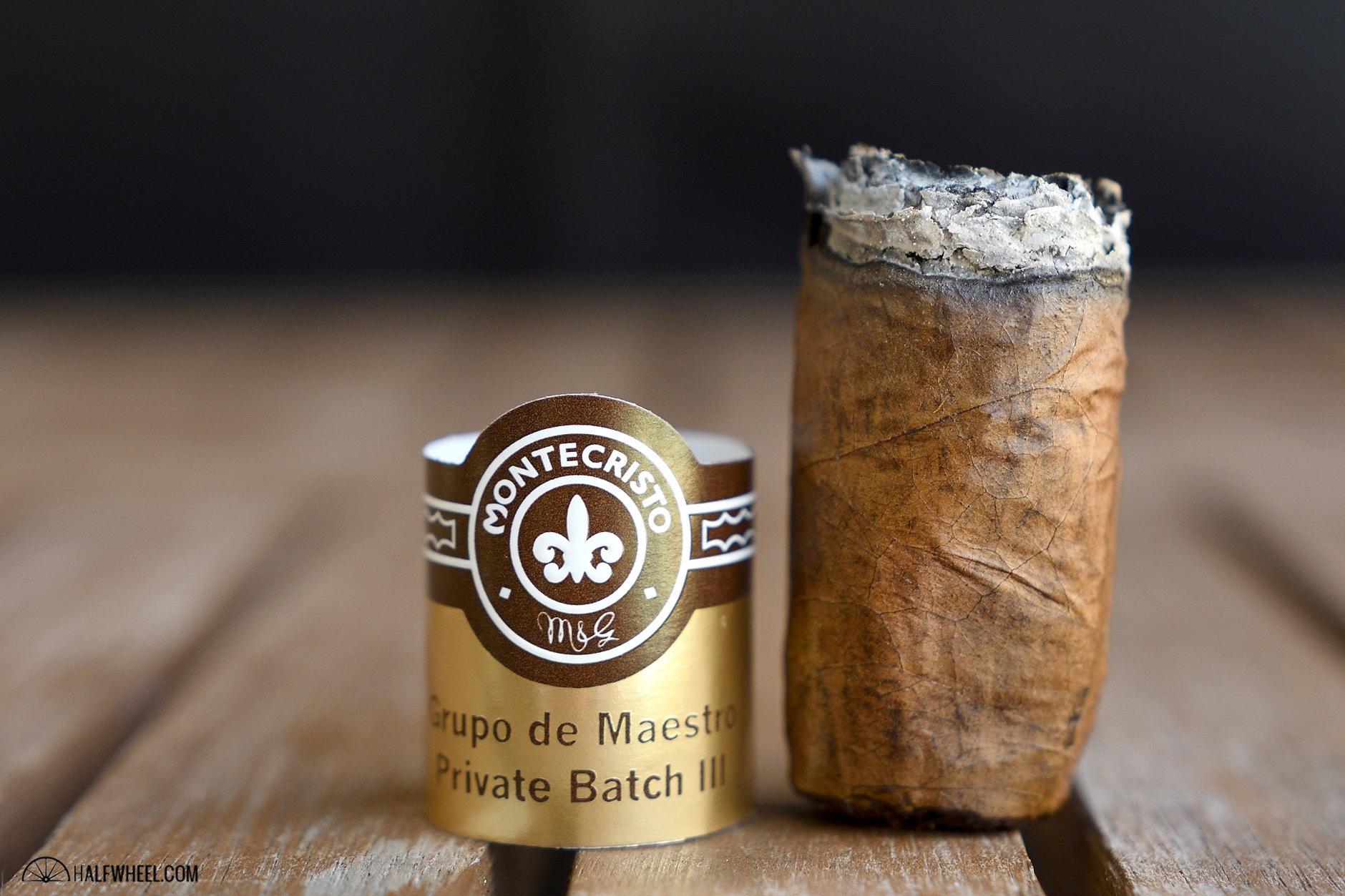 The Montecristo Grupo de Maestros Private Batch III was a continuation of a very intriguing and neat project. From the start I had some high hopes for the cigar, with an attractive wrapper and a delightful cold draw. However, I was certainly thrown for a loop as it wasn’t the profile I was expecting, but it quickly morphed into something that was borderline exquisite. Unfortunately just as it was reaching that pinnacle, it took a sharp downward turn that I could only attribute to the atrocious burn issues that culminated in the cigar literally going out on me every few draws. Perhaps I just got some bad samples, maybe box 49 just didn’t get rolled with the same attention as the rest. The blend seemed to be there though, but the cigar got in its own way and didn’t allow it to shine.