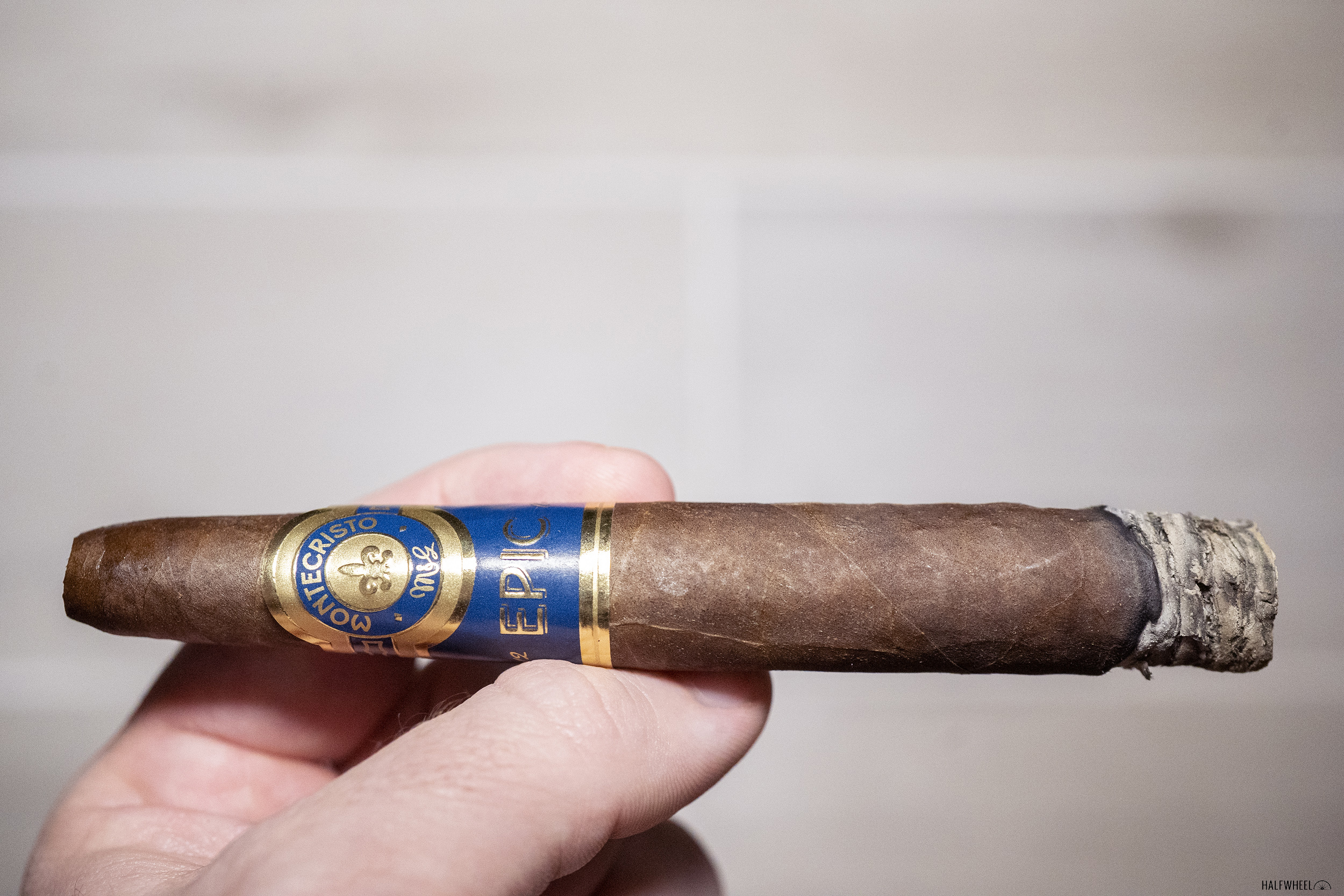 It is no secret that Altadis U.S.A. has a huge portfolio of cigars that it produces, many of which fall under the headers of some of the cigar industry’s biggest brands. Altadis’ portfolio includes nearly 20 brands, the most notable of which is Montecristo, and which contains more cigars than many well-known cigar brands. 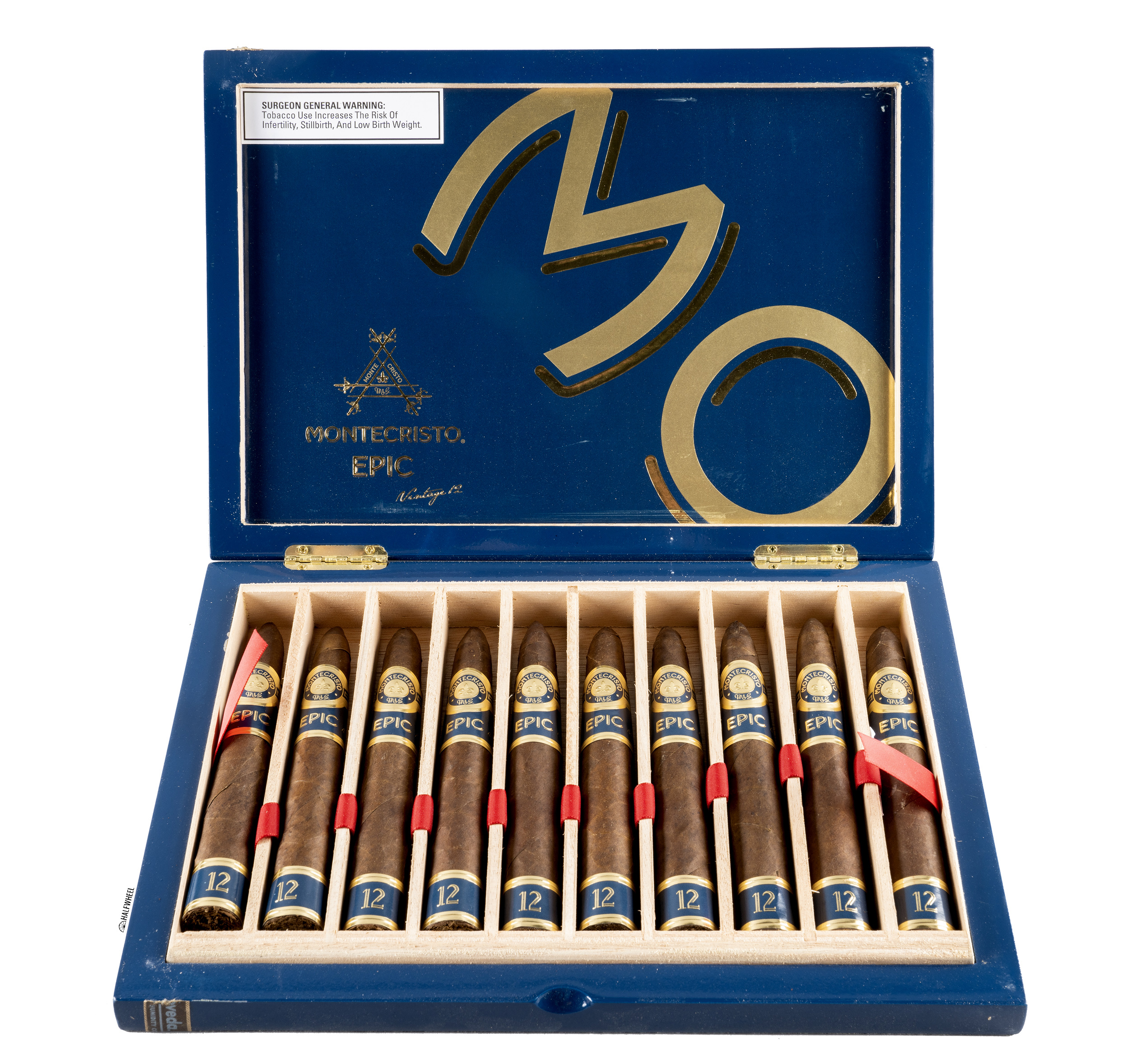 The Montecristo Epic Vintage 12 gets its name from some of the fillers used in the blend, which the company says are from the 2012 harvest in the Dominican Republic and Nicaragua. Alongside those fillers are leaves from Nicaragua, a Dominican binder and an Ecuadorian Sumatra wrapper. It is a blended created by the Grupo de Maestros, the team of cigar industry veterans who run the vast operations of Altadis’ factory operations.

The line is offered in two sizes. 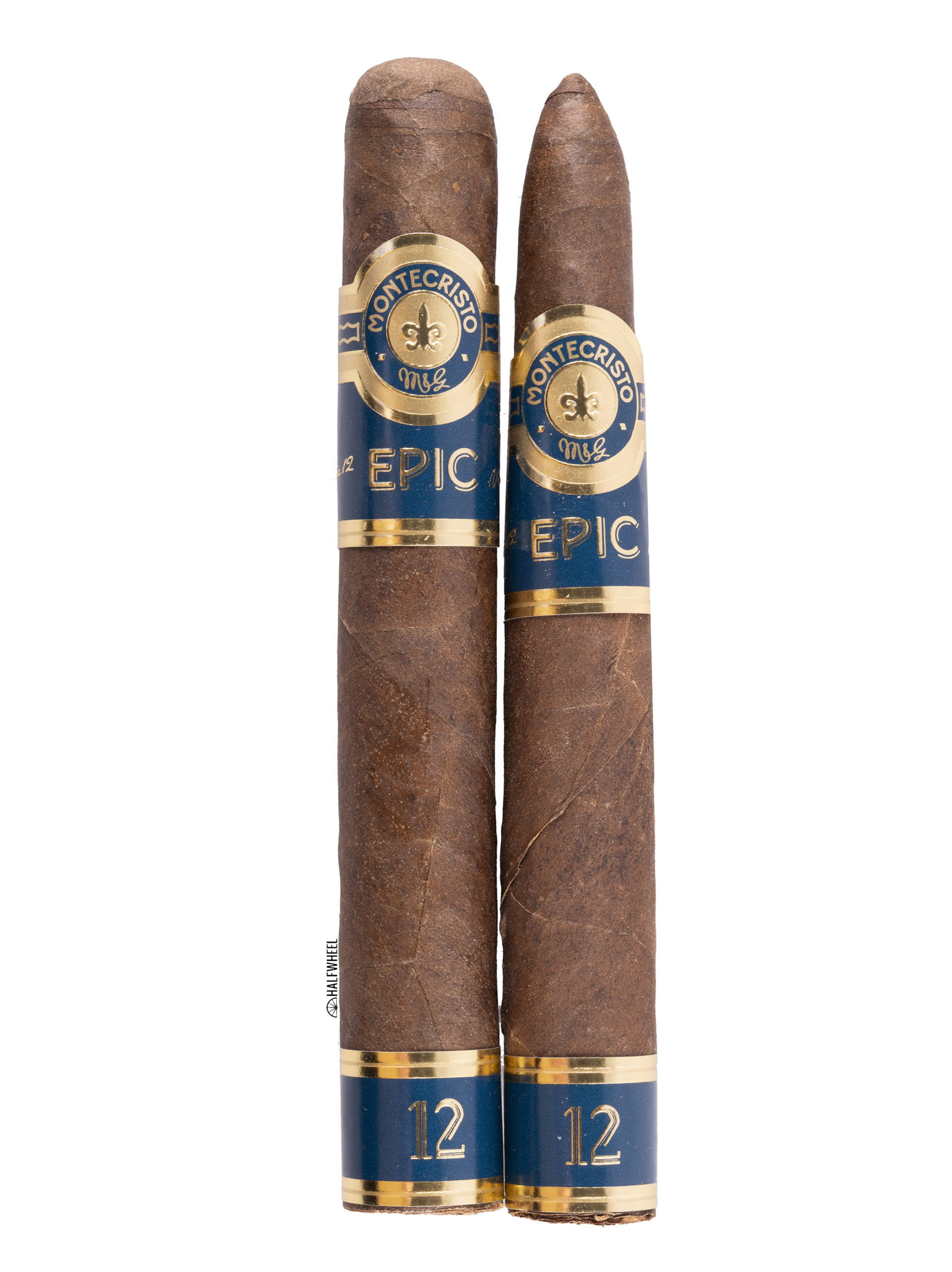 The cigars were released initially through launch events held at Casa de Montecristo locations in May before shipping to select retailers in June and getting a full release in July. It is the latest installment in the Epic subset of the Montecristo brand, joining the original Montecristo Epic that debuted in 2012 and the Epic Craft Cured from 2017. I’m a bit surprised that Altadis U.S.A.’s version of the No. 2 vitola didn’t stand out more distinctively, though as I don’t smoke many of them, I’ll go easy on myself. The longer, tapered and pointed head is definitely distinctive, and one I’d like to think should be more recognizable. It’s also a much more pronounced taper than what I would compare to typical torpedoes or belicosos. The wrapper on the cigar is a dark leaf that shows more glue spots than anything, as the veins are fairly small, the seams are fairly thin and flat, and oiliness is there but not something that stands out until I touch the leaf. Once I do, I find a fairly smooth, almost waxy texture on the leaf. Each of the cigars is rolled firmly with just a little bit of give. The foot offers a very muted aroma, one to which I find myself challenged to put many descriptors. There’s a bit of milky creaminess and a sporadic milk chocolate aroma, but little if any pepper or anything else. At its best, it’s decently thick and soft, at the other end is simply a pretty nondescript aroma. Even with taking a conservative cut of the head, air moves well on the cold draw, with the tapered vitola showing just a bit of an effect. The creaminess is a bit thicker here and I get a sprinkling of light pepper that hits the palate with an effect that somehow makes it register in the nostrils as well. There isn’t as much chocolate or other sweetness, with one cigar having an interesting and mild mix of wood and vegetal flavors.

For not showing much before being lit, the Montecristo Epic 12 No. 2 opens up with a pleasant surprise of black pepper, backed by a bit more of the creaminess and a slightly funky and woody flavor around the edges. As that burn line progresses, the funkiness fades and a multi-layered pepper begins to emerge. It has a familiar, slightly thin black pepper expression on the tongue that then unfolds into a slightly heavier flavor as well as sending a tingle through the nostrils as well. In addition to the flavors that come through in the initial half inch, I find myself debating if I need to clip off a bit more of the head. This is largely done with an eye towards optimizing airflow, but the second sample seems to develop a slight bit of tar which needs to be clipped off. There are some moments where there’s a bit of a latte flavor emerging, an interesting combination between the creaminess and dry coffee beans. The pepper keeps building through the nose and it’s not long before the cigar seems like it’s eyeing getting into a fairly full profile, particularly if I add the retrohale into the experience. As someone that enjoys a good retrohale, I find myself doing that more and more through the first third, and the cigar continues to reward with an enjoyable peppery tingle. Flavor varies between medium and medium-plus, body isn’t far behind, and strength is closed to medium. Construction is very good thus far, particularly when getting the draw dialed in through cutting the right amount of the head.

The second third of the Montecristo Epic Vintage 12 No. 2 sees the profile turn a bit drier by way of dry woodiness entering the profile, which gives a bit more vibrance to the profile, particularly when it pairs up with the black pepper. Given the age statement of some of the tobaccos used in the blend, I find myself trying to focus on how that might manifest in the flavor. It seemed to do that a bit more in the first third, as the second third comes across more vibrantly and makes me think that the wrapper is driving the profile. One sample still has a bit of a tar problem; it’s minor in terms of quantity but as anyone who has experienced the taste of tar knows, it doesn’t take much to affect the flavor. A clip of the cap remedies the situation as well as opens up the draw a bit, and in the case of this sample seems to have finally hit the sweet spot in terms of airflow. As the burn line progresses, the peppery aspect of the cigar increases, mixing in a bit of white pepper to both lighten and brighten the pepper’s expression. Flavor is now a solid medium-full, body is medium-plus and strength is just north of medium. Combustion starts to struggle a bit, but the burn line remains good and when burning properly, smoke production is good. 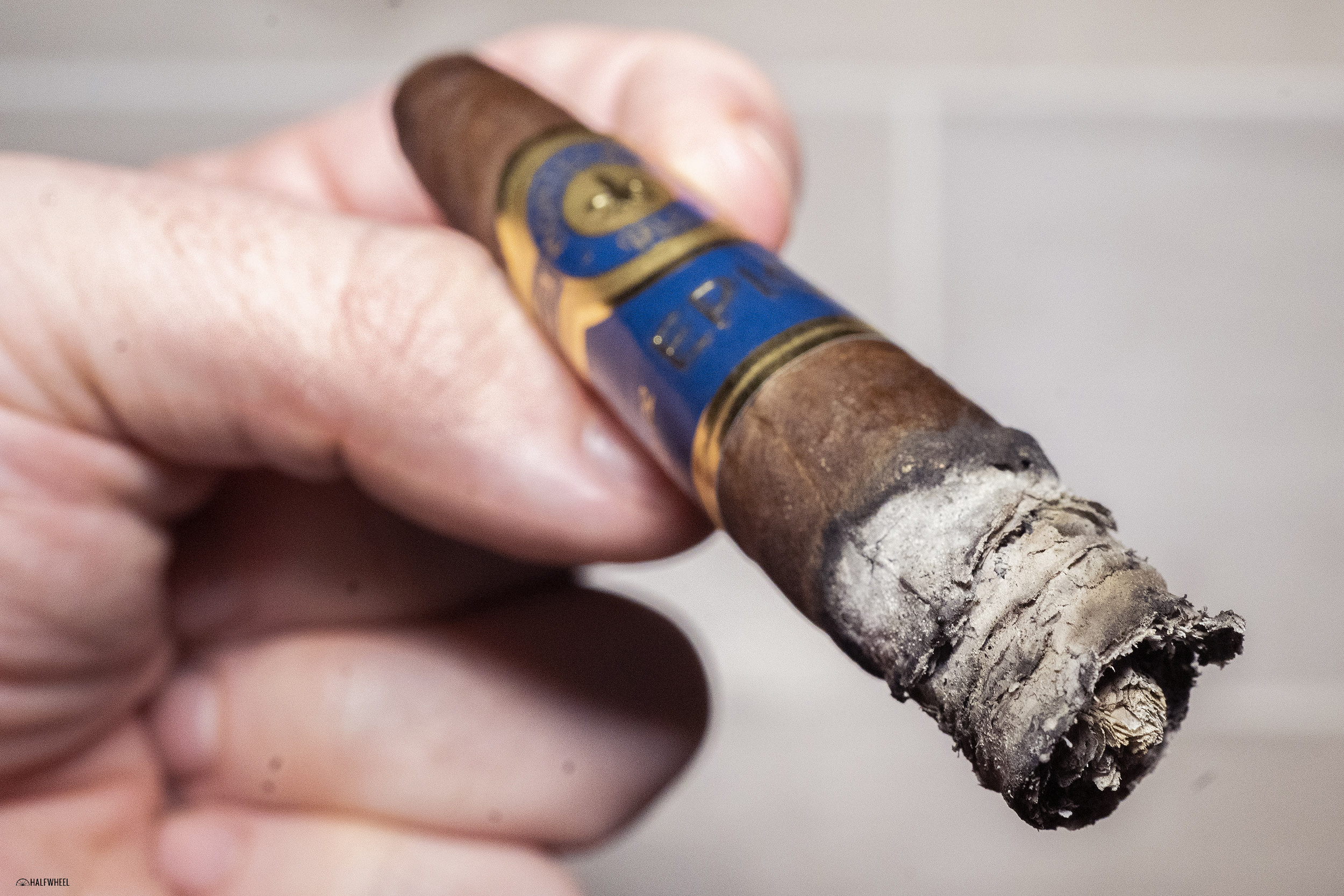 The final third sees the Montecristo Epic Vintage 12 No. 2 shift its profile slowly but steadily, bringing in a bit of creaminess to fill out the profile and soften some of the more assertive parts of the profile. Pepper is still a contributing component, particularly through the nose, though it does seem to back off a bit from puff to puff. Combustion hampers the flavor development a bit, as I find myself needing to relight one enough times to have me thinking of dry boxing the next sample. There’s still some roughness hitting my palate from the core of the flavor, and that intensifies as the burn line progresses up the cigar. The retrohales continue to deliver through the final third, staying bright and peppery but not overbearing, easily making them the standout of the cigar. Combustion issues hamper the final third, and several relights lead to me putting the cigar down a bit earlier than I’d like to, even though smoking time easily cleared the two-hour mark in each sample. Flavor finishes medium-plus with a few flirts with being full, body is medium-plus, and strength is medium-plus. 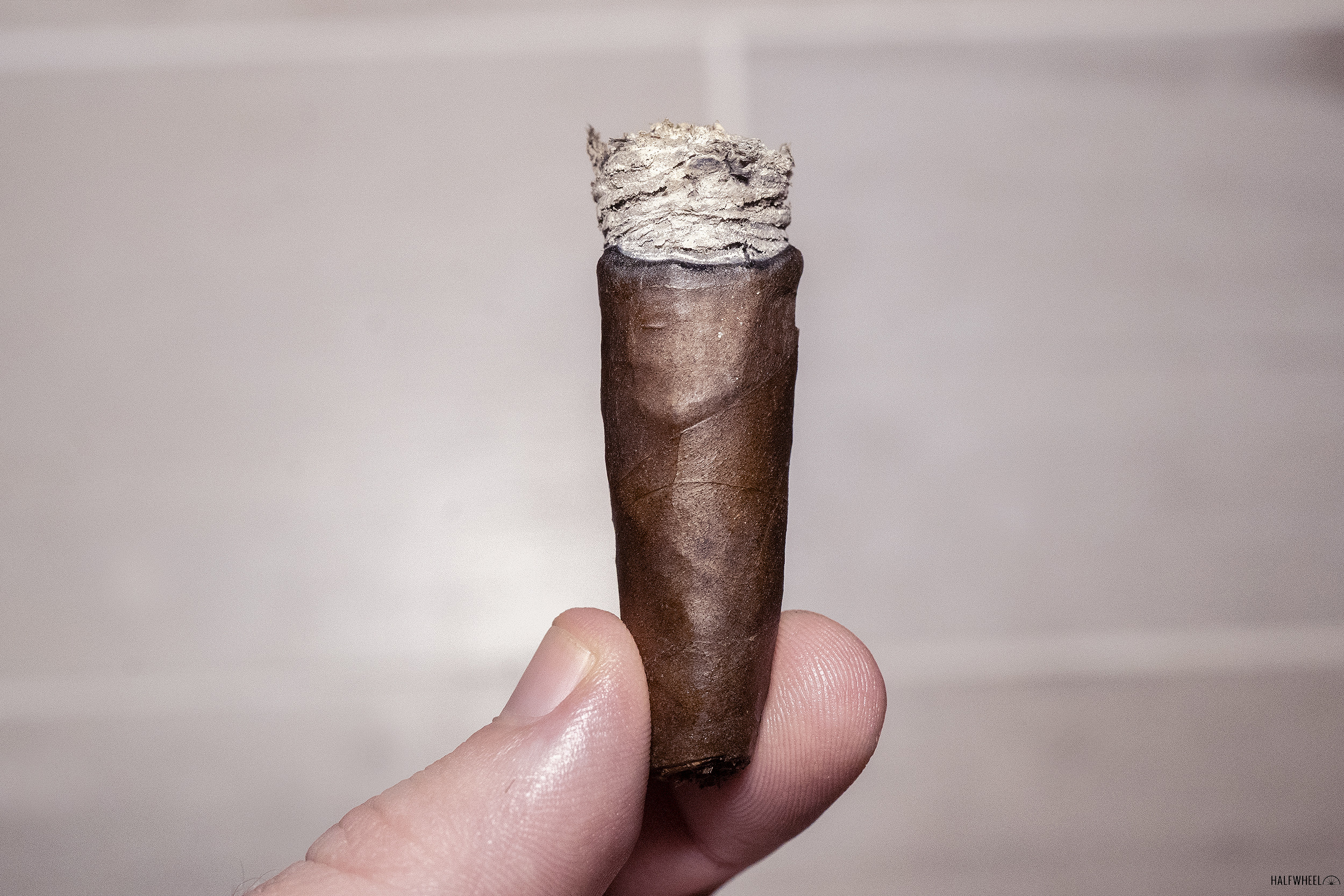 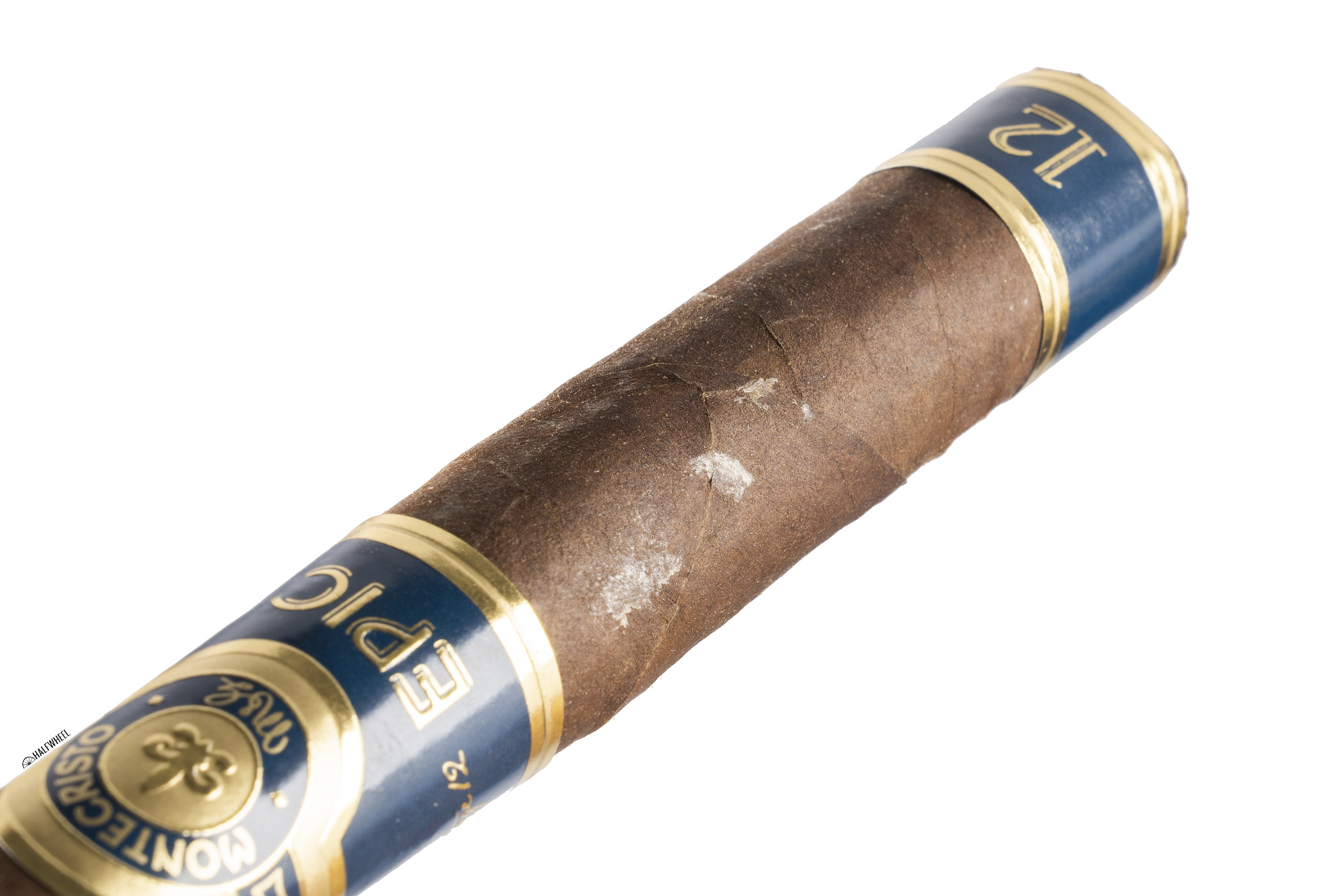 It's a shame when it seems like technical and/or combustion issues hamper a cigar's performance, since they prevent the blend from having a decent chance to show off what it has to offer, but that seems to be the case with the Montecristo Epic Vintage 12 No. 2. There's a good amount of very enjoyable flavor in the first half, and while there are some funky spots there are far more enjoyable puffs, mixing vibrance and nuance well. Yet the second half's struggles with combustion are not only a disappointment in their own right, but also lead me to wonder if the first half might have also been affected, even if just slightly. Judging by the better points of the three cigars I smoked for this review, I'd say it's a cigar well worth trying, though I do that having to also suggest dry boxing them to help rid them of what seems to be excess moisture. If you're willing to do that, I'm confident you will be rewarded with a very enjoyable cigar.