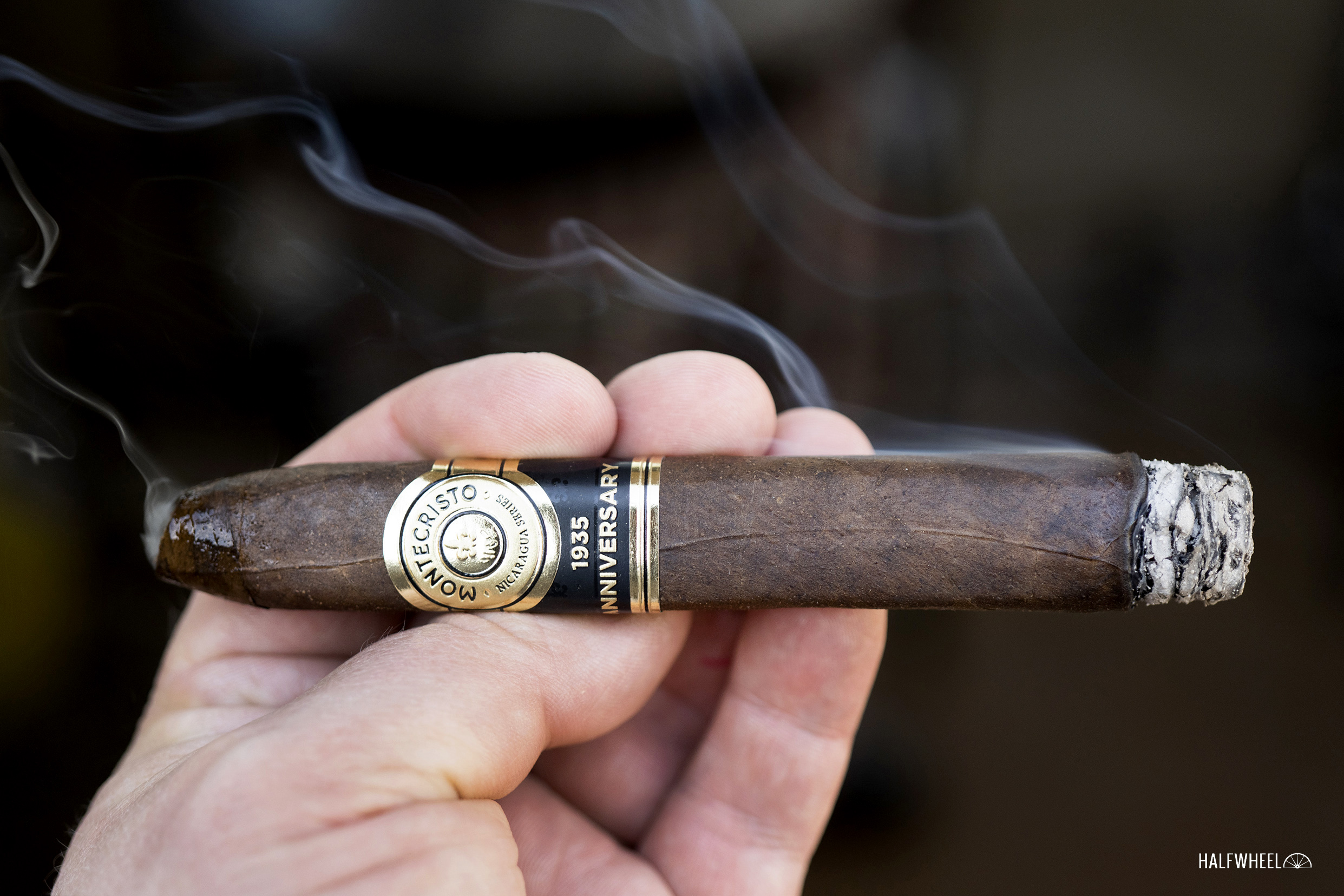 As has been mentioned many times on this website, anniversaries are oftentimes a big deal in the cigar industry; therefore, it hardly comes as a surprise when a new blend and/or line is announced to commemorate a specific occasion.

Thus was the case back in October 2020, when Altadis U.S.A. announced it would be releasing Montecristo 1935 Anniversary Nicaragua to coincide with the 85th anniversary of the Montecristo brand. The new line includes four different vitolas, all of which are box-pressed and are being produced by someone who is well known to Altadis U.S.A.—namely Abdel Fernandez—after he had previously made a number of cigars for the company.

“To honor the age-old tradition of soft-pressing cigars, the Montecristo 1935 Anniversary Nicaragua will be introduced as a soft-pressed series of four sizes,” said Rafael Nodal, head of product capability for Tabacalera USA, in a press release. “The cigar offers a luxury showcase from seed to smoke that combines classic craftsmanship and extra-aged estate tobaccos from Nicaragua’s best growing regions.”

Blend-wise, the Montecristo 1935 Anniversary Nicaragua is a Nicaraguan puro made with tobacco grown on Fernandez’s farms. It is also being rolled at Fernandez’s San Lotano factory located in Ocotál, Nicaragua. Three of the four box-pressed vitolas in the line are packaged in 10-count boxes, while the 5 1/2 x 46 Demi is being sold in 20-count boxes. 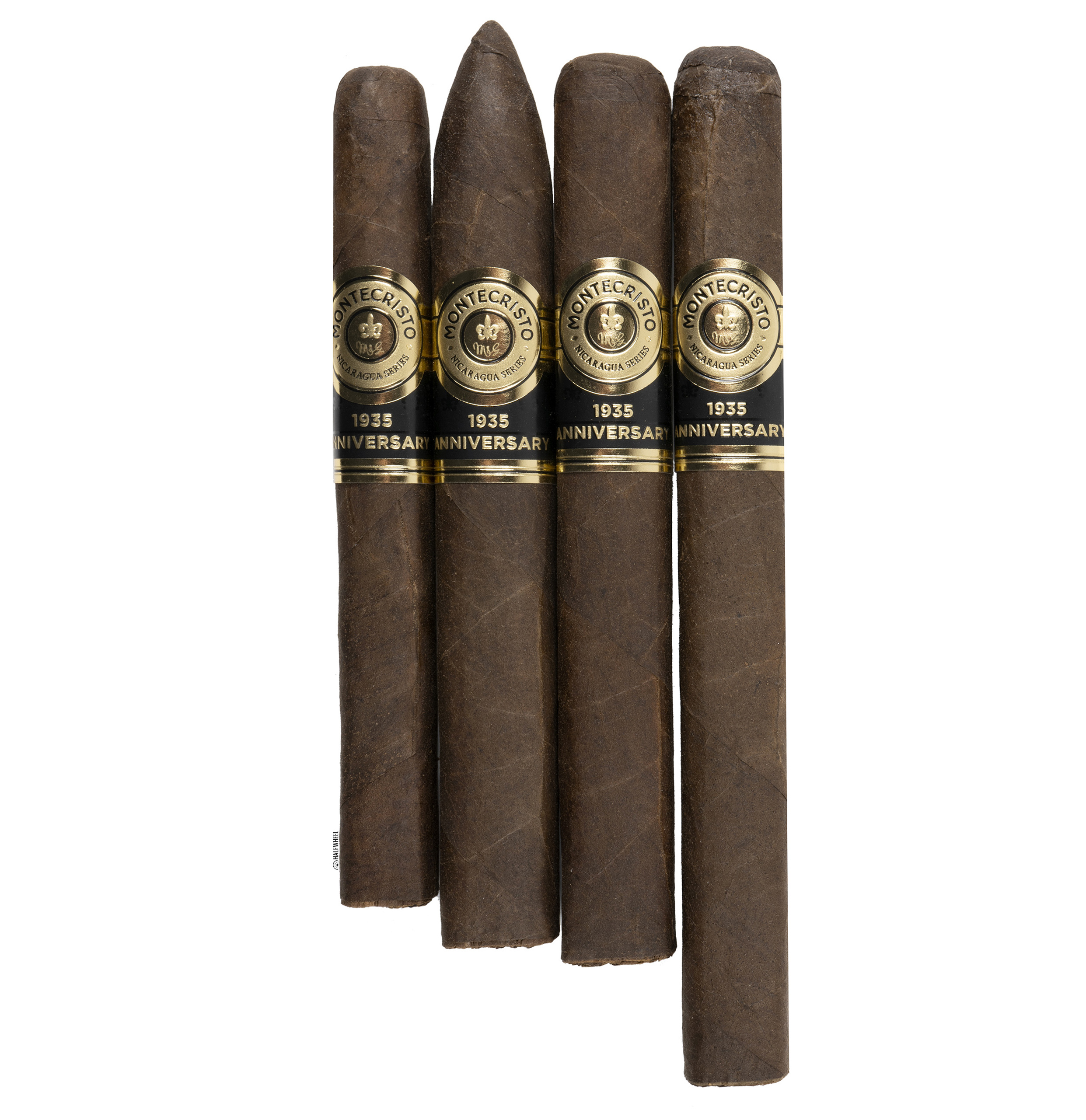 My colleague Charlie Minato explained the relationship between Altadis U.S.A. and Habanos S.A. vis-à-vis the Montecristo brand as follows: 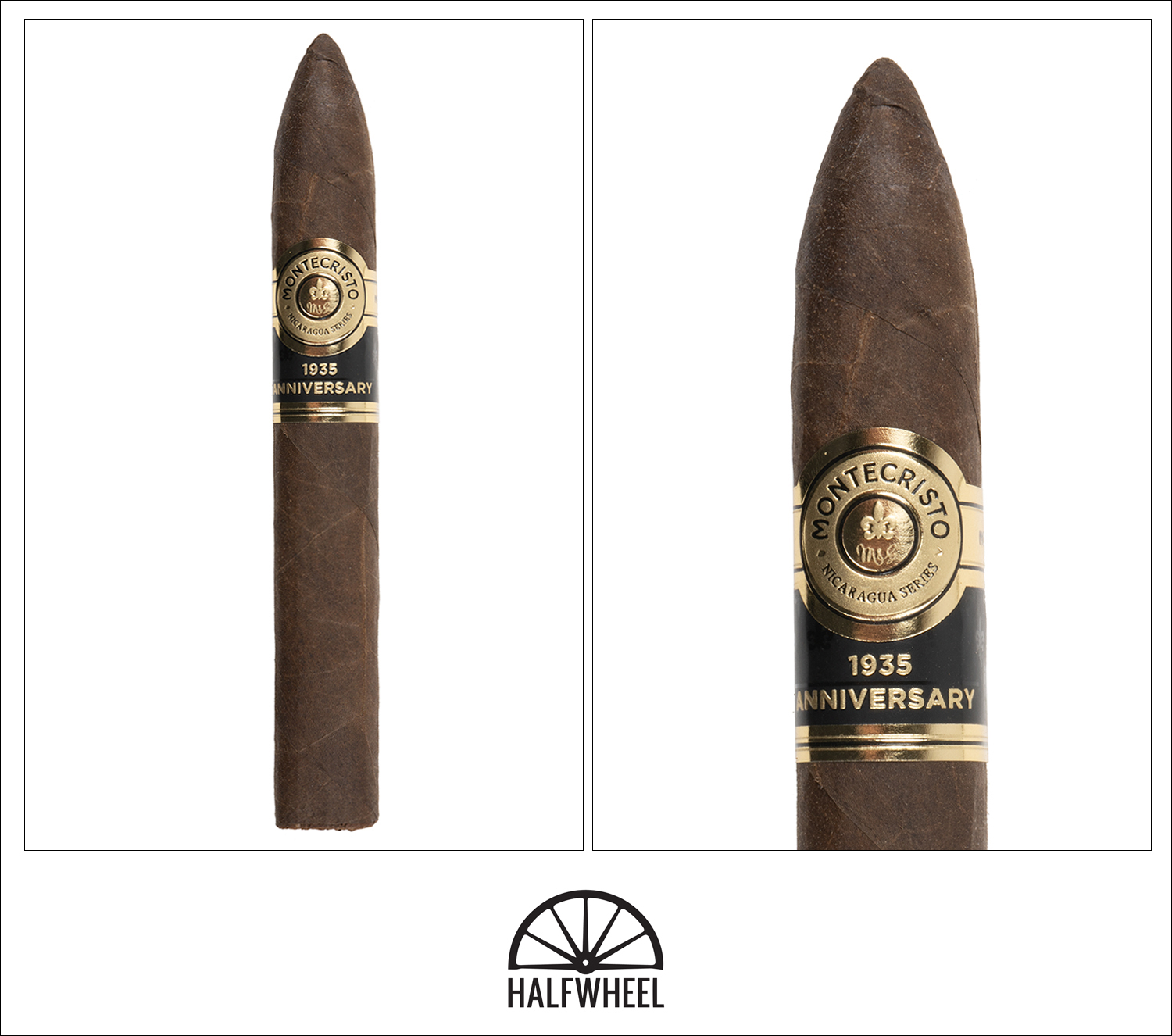 The Montecristo 1935 Anniversary Nicaragua No. 2 is covered in a deep, dark brown wrapper that is extremely rough to the touch and also includes a number of major veins as well as plenty of oil. It is fairly hard when squeezed, but the soft box-press is a very nice visual touch. Aroma from the foot and wrapper is a combination of peanut shells, sweet earth, leather, barnyard, hay and oak, while the cold draw brings flavors of creamy oak, leather, earth, clay, espresso beans, almonds and a touch of floral sweetness.

I am taken aback by the first 10 puffs or so of the Montecristo 1935 Anniversary, as a punishing combination of aggressive black pepper on the retrohale and spice on my tongue almost blows my head off whenever I try to retrohale. Thankfully, both die down fairly quickly, leaving behind distinct flavors of freshly brewed black coffee and leather as the dominant combination, followed closely by notes of creamy oak, popcorn, earth, hay, cinnamon, and a very slight vegetal flavor bringing up the rear. I also pick up some very distinct caramel sweetness and black pepper on the retrohale as the first third burns down, the former seems to be increasing in strength while the latter continues to recede. In terms of construction, the draw is excellent after a simple Dickman cut and the burn line is almost perfectly straight so far, while the smoke production is off of-the-charts high. Strength-wise, the Montecristo 1935 shows its hand early on, easily hitting a point closer to medium than mild as the first third comes to an end.

The cinnamon note from the first third increases in strength a bit as the second third of the Montecristo 1935 begins and there are other major changes in the profile, specifically in the dominant flavors which now include a combination of oak and creamy leather. Secondary notes of espresso beans, hay, powdery cocoa nibs, buttered popcorn and baker’s spices flit in and out in various amounts. I notice a significant increase in the black pepper and caramel sweetness notes on the retrohale and both of are now strong enough to be major parts of the profile. The draw and burn continue to give me no issues whatsoever while the smoke production continues to pour off of the foot like a house on fire and the strength ramps up enough to hit a solid medium by the end of the second third and is still increasing. 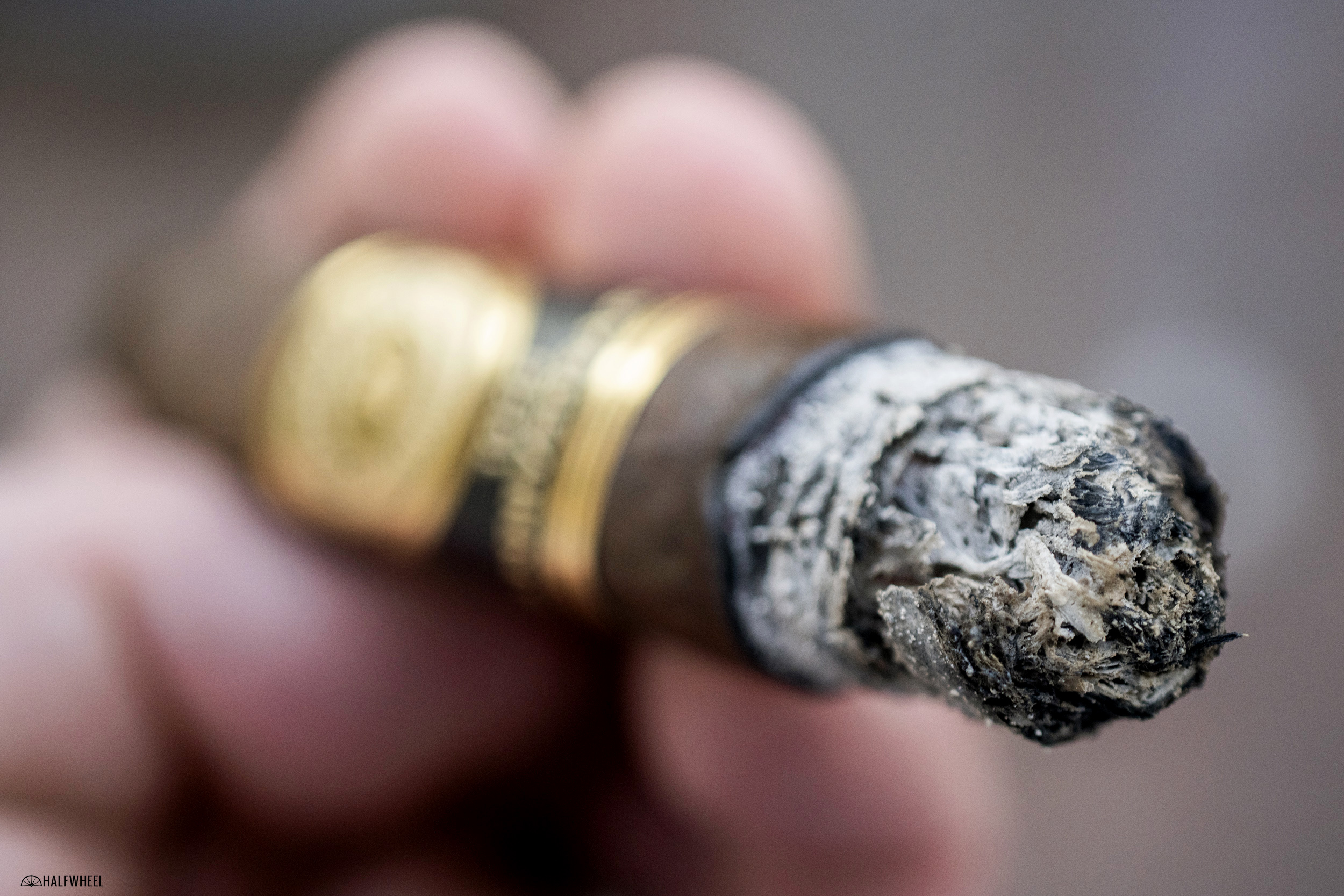 Although the flavors of oak and creamy leather continue to dominate the profile of the Montecristo 1935 Anniversary Nicaragua during the final third, there is even more cinnamon on the palate than ever before, and the retrohale features a bit more of both the caramel sweetness and black pepper compared to the second third. Additional flavors in the profile include vegetal, hay, gritty earth, espresso beans and sourdough bread, while the finish actually features a generic citrus note that comes and goes. Construction-wise, both the draw and burn finish with no issues, while the overall strength stalls out just below the full mark right before I put the nub down with about an inch remaining. 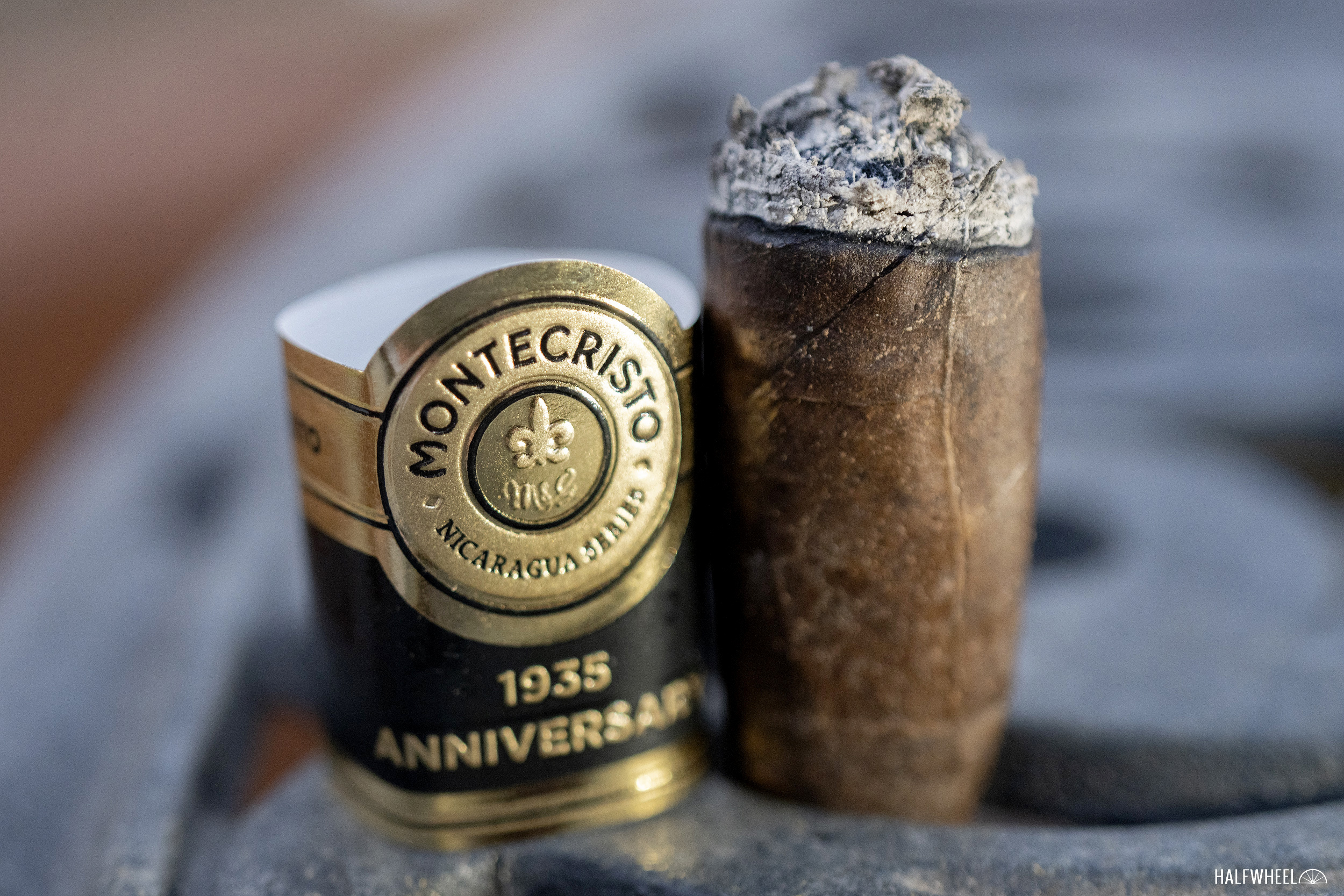 After almost getting my head blown off by the overwhelming combination of black pepper and spice in the first 10 puffs, the Montecristo 1935 Anniversary Nicaragua No. 2 calms down nicely in the final two thirds which in turn allows some very enjoyable flavors to emerge, including freshly brewed black coffee, oak and cinnamon as well as a nicely integrated caramel sweetness. While the profile is almost too bold at certain points—which has the effect of reducing the balance in the blend enough to hurt its overall score—the overall construction was amazing for all three samples I smoked, with only one touchup needed in almost five total hours of smoking time. Due to the high price this will not a cigar from everyone, but if you are looking for a full strength, bold blend with some decent flavors that you literally don’t have to think about after the first light, you have found it.