A few years ago I was having trouble with the humidity in my converted wine cooler and adding more beads wasn’t seeming to help. I wanted something that could put out way more humidity to help combat the Texas summer and the refrigeration unit in the wine cooler.[ref]The refrigeration unit sucked out humidity inside in an effort to keep the wine cooler cold.[/ref] The goal was to find the best bang for the buck electronic humidifier—something that would force water evaporation in a semi-controlled manner. Enter the Moist-N-Aire S-1000R ($230.)

If you’ve been in a dozen different cigar stores, there’s a very good chance you’ve been in the same room as a Moist-N-Aire, only it’s probably not because you’ve seen them from sale. Rather, there’s a good chance in a cabinet somewhere in the shop, there’s a Moist-N-Aire. The reason as to why it’s there is the same reason why I picked up one a few years ago—it’s, simple and for the most part larger than anything else you are going to find for $150. 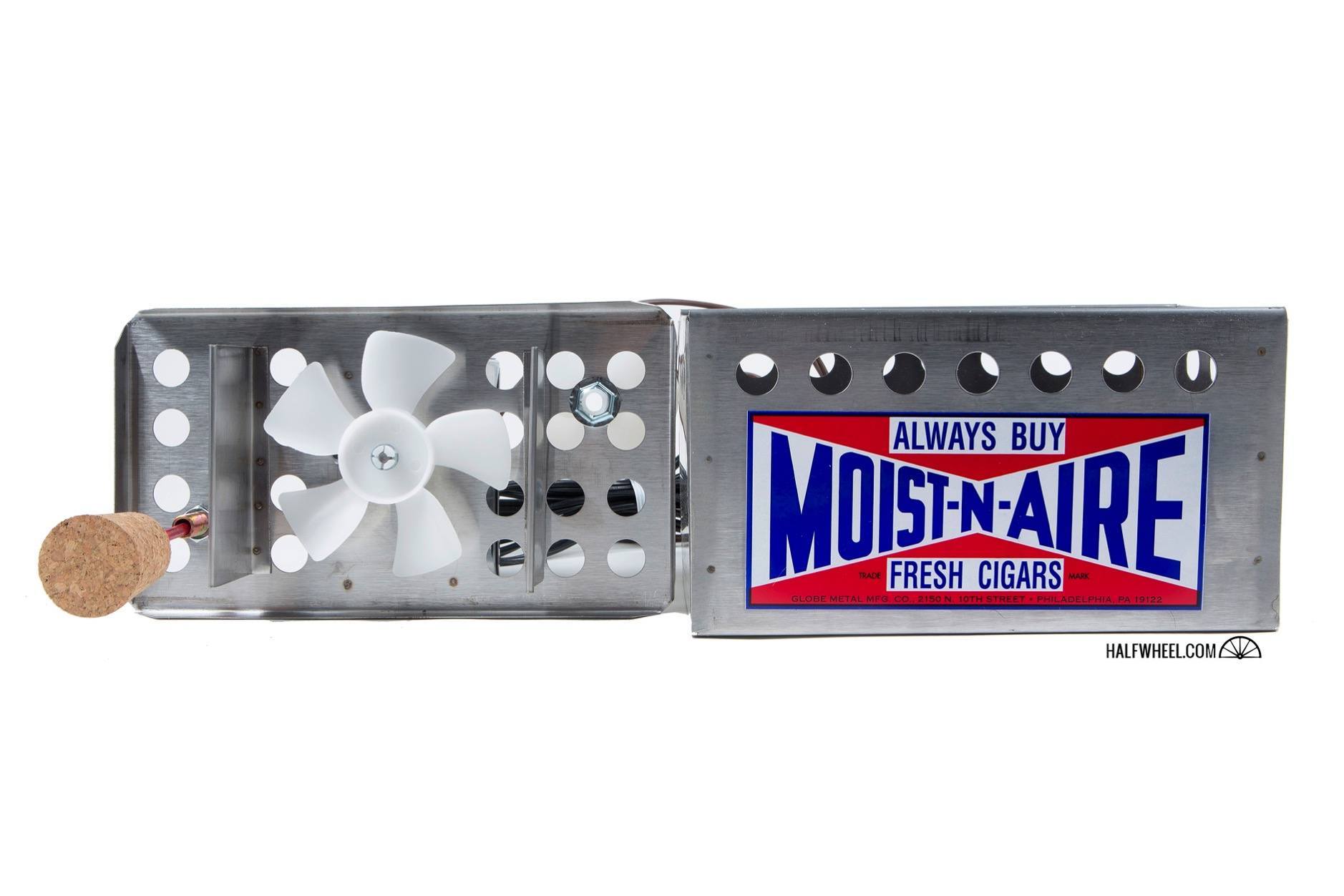 The Moist-N-Aire S-1000R unit is basically five pieces, although all but one are connected. There’s a stainless steel reservoir with holes to allow for humidity to leave the unit. That attaches to the top unit, which contains the fan, A/C power connector and a wired connector to the control unit. The Moist-N-Aire measures 9 1/4 inches long, 5 1/4 wide and 9 inches in height, while the control measures 4 1/2 inches x 3 inches x 1 1/2 inches. In addition, there’s a small funnel attached to the top of the fan unit for filling and a red bobber on the other side to help show if the unit is filled.

Set-up is about as easy as it will ever be. Remove any debris from the inside of the reservoir, attach the top piece, fill with water, plug in to the to the wall, set humidity and you are done. It’s a bit more steps than I initially remembered it as, but it’s about as little as you will ever have unless you are working with a pre-filled unit. 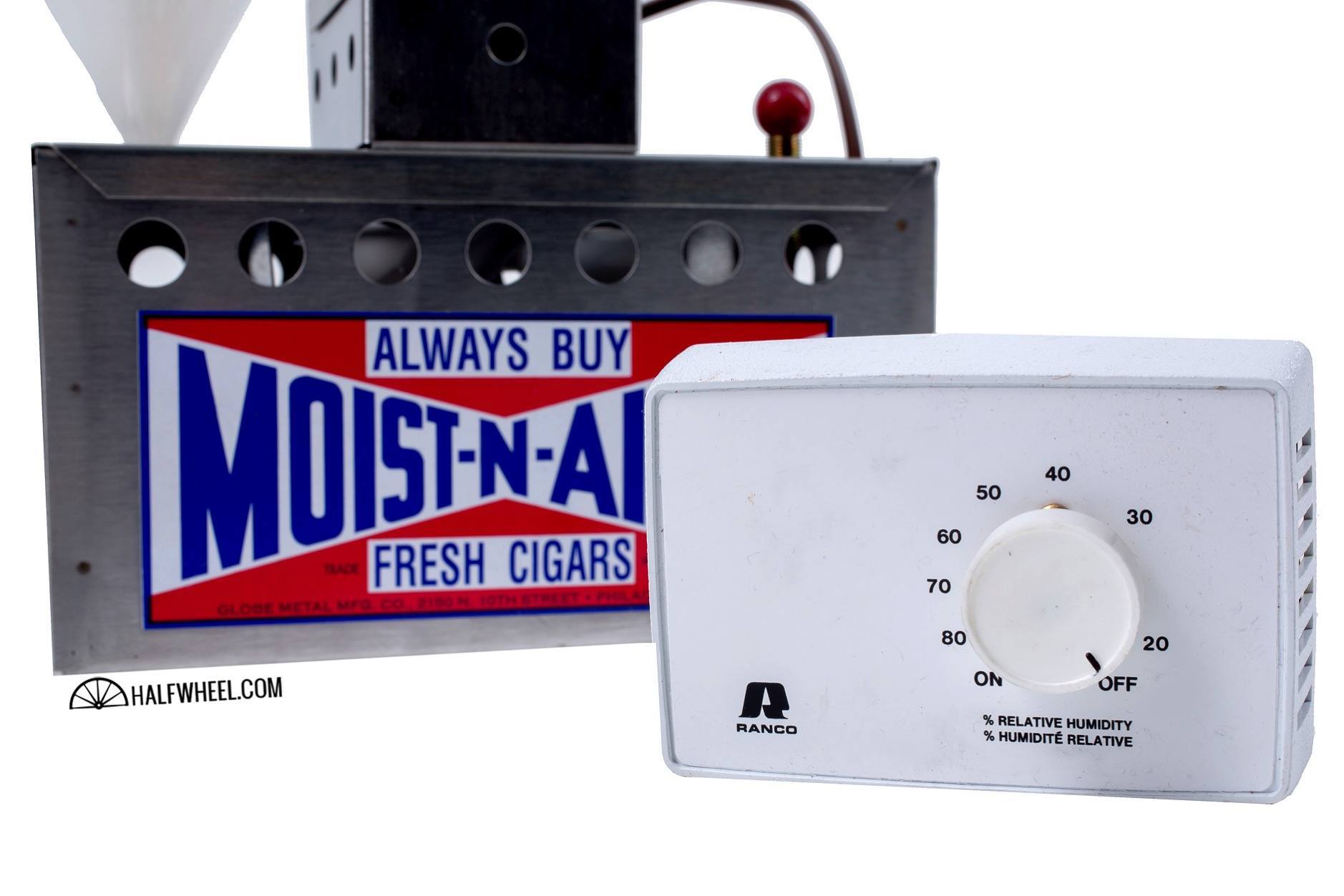 The simple design sees a fan blowing directly on the water. Humidify is released through dime-sized holes on all sides of the unit, as well as the top. The fan operates at a single speed, unless you count “off” as a speed, in which case there are two “speeds.” A small knob similar to that found on some light switches can be used to determine when the Moist-N-Aire needs to provide more humidity or when it should rest. I found that the Moiste-N-Aire was calibrated about four percent low, meaning if I set the unit to 70 percent humidity, it would stay on until the hygrometers on either side of the control unit were reading about 74 percent relative humidity.

There are a few variations of the Moist-N-Aire, the most obvious difference is whether the control unit can be placed somewhere else in the humidor, or the slightly less expensive version (S-1000) which mounts the control unit directly on top of the fan unit. While the wires are not the prettiest looking thing, I definitely appreciate having the ability to move the control unit somewhere else as it produces a better sense of how much humidity is in the unit.

I purchased the Moist-N-Aire for this review, but also because one of our humidors was struggling to keep up over this winter. While I think the money spent for the two purposes didn’t result in a bad purchase, I definitely have some issues. The humidity levels not being calibrated correctly is somewhat expected and honestly not much of an issue, but the wires are annoying. Furthermore, none of the wires are detachable, something that seems like it would be relatively inexpensive to implement and would save a lot of headaches. As it is, I have the control unit wire dangling in the front of a humidor, which doesn’t look great. 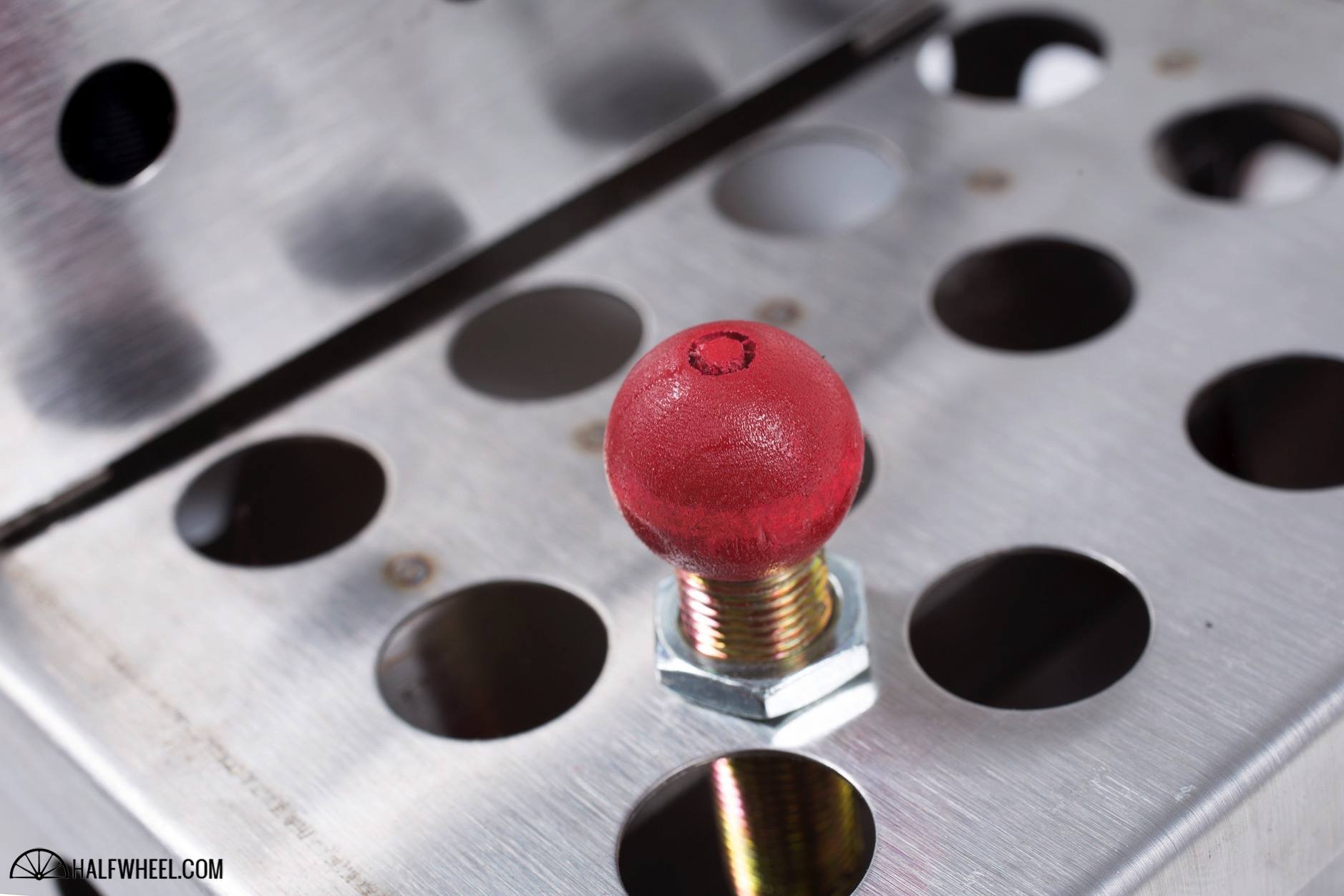 Also, the unit doesn’t have any option for alerting or when it needs to be filled or an automatic shutdown. That’s a big issue, particularly when you have placed the unit in your in any other manner than with the Moist-N-Aire logo facing outwards. This configuration gives you the ability to see the red bobber knob and have access to the refilling funnel. Any other configuring means that the funnel is either moved back further, making refilling more challenging, or in my case, the red bobber is obstructed by the top of the control unit because I’ve placed the unit in length-wise first.

The auto shutdown is something that also seems like a relatively cheap solution, but one that would be great. If the reservoir empties out—and you don’t realize it—the fan will continue to run, and run, and run. That generates quite a bit of heat, which is normally something you don’t want in your humidor.

While the funnel is tiny and has led to me spilling water from time to time, I’m not sure there’s that much better of a solution. I understand the desire to keep a somewhat low profile with the unit and adding a larger funnel would definitely disrupt some of that.

My final note on the list of negatives isn’t necessarily a flaw, but a reality. If you own a Moist-N-Aire, you have to be willing to turn it off once a month and inspect the reservoir for mold. Even if you use distilled water, a bucket water left out for long periods of time is generally a great way to grow mold and because it doesn’t use clear acrylic or plastic like some other humidifiers, it requires a bit more work to see what the state the water is in. I’ve been in cigar shops that have left units unattended for years and witnessed the horror of the employee who decided today was the day to clean it out.

The competitor to the Moist-N-Aire is the Cigar Oasis Magna ($199), which can generally be had for around the same price ($150) and features similar claims. The largest difference between the two units is that the Magna uses silicone beads within its reservoir as opposed to just pure water. It’s an alternative to floral foam, which attracts mold, and is used to create a more controlled humidity release. Personally, I prefer the water only approach for units of this size. 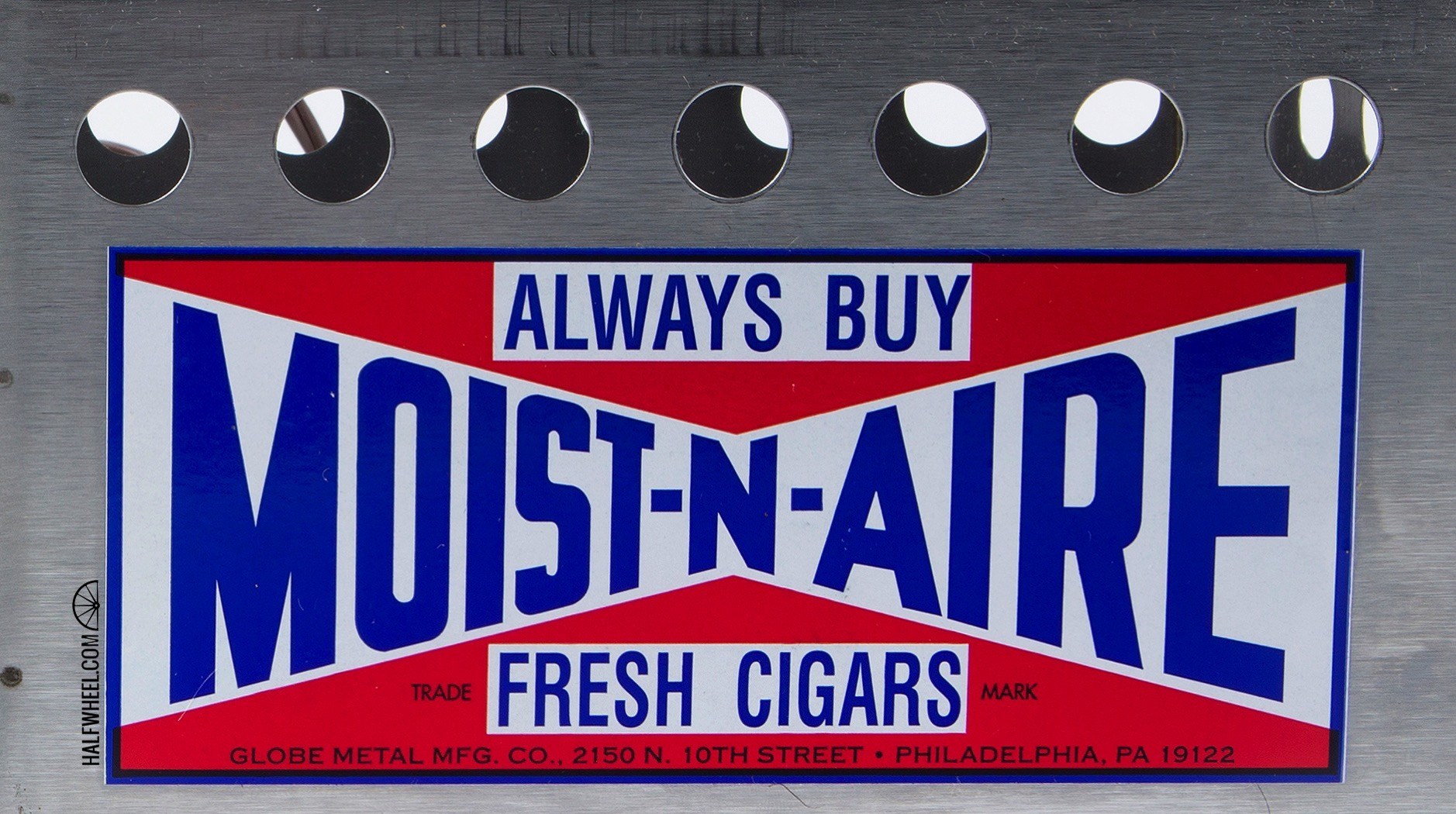 Even though I just did a few months ago, I wouldn’t buy another Moist-N-Aire. While it has its advantages, after just a week of ownership, I remembered why I stopped using the original one I purchased a few years ago: it’s very limited in application. The Moist-N-Aire needs to be placed with its logo facing out, it needs to be checked on at least once every few days or you risk rising temperatures inside, it needs to be inspected every month, cleaned every few months and the wiring is just ugly. The sweetspot in terms of capacity and price is tempting, but even if I was in the market for an electronic humidifier at around $150, I would try the Cigar Oasis Magna—site unseen. If $150 wasn’t a strict budget, it’s off to Aristocrat Humidors for another one of its electronic humidifiers.

Site sponsors Atlantic Cigar Co. and JR Cigar both have the Moist-N-Aire unit in stock.