It wasn’t that long ago that seemingly every cigar-related conversation I had involved the question of whether or not there’d be new companies and new cigars on the market in the coming years as a result of FDA regulation. While the launch of new companies has slowed quite a bit, it hasn’t come to a complete halt, and certainly the release of new cigars, while slower, is still a regular occurrence.

Case in point, just before the 2018 IPCPR Convention & Trade Show this past July, Micallef Cigars announced that it would be adding five new blends to its portfolio, expressed in a total of 22 cigars ranging from coronas to gordos and prices from $5.50 to $11. The cigars are all nestled under the header Grande Bold and come bearing similar primary bands but differentiating secondary bands. The Brazilian Mata Fina line gets a green band, the Nicaraguan gets blue, Maduro wears black, Sumatra sports red and the Ligero line wears gray.

Given the bold billing in the name, it should be no surprise that four of the five lines are described as full-bodied, with the Sumatra earning a slightly milder medium-full rating. Each uses a distinct blend of tobaccos, though there is plenty of Nicaraguan tobacco to be found across the series. In the case of the Grande Bold Ligero, it uses an Ecuadorian Sumatra ligero wrapper over a Nicaraguan binder and a mixture of Brazilian, Dominican and Nicaraguan fillers. It is offered in four sizes:

All four sizes come in 20-count boxes, as do all the other sizes and blends in the Micallef Grande Bold collection. 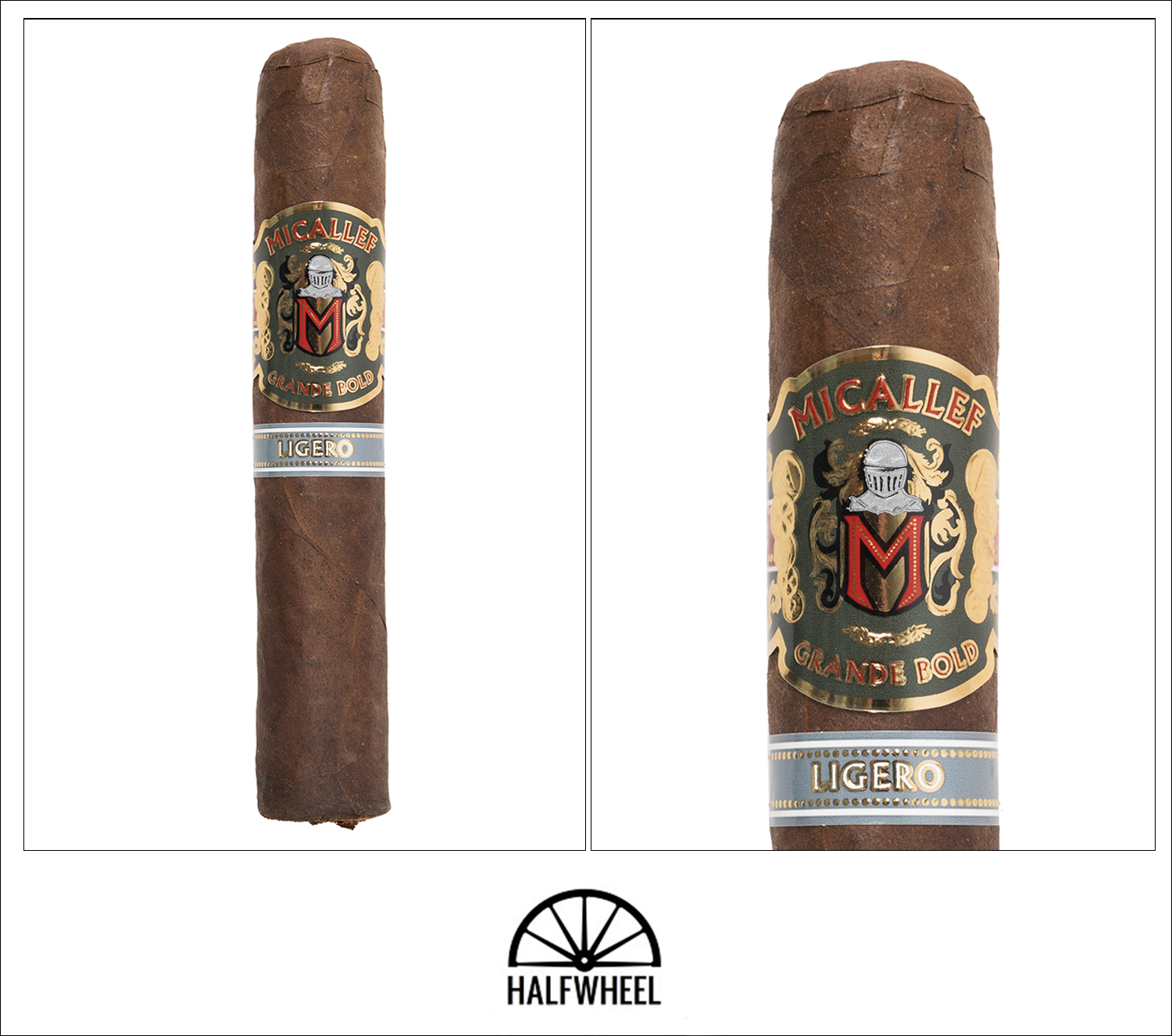 Just looking at the cigar, I feel that there are some readily apparent signs this thing packs some strength. First, the secondary band says ligero on it, borrowing on a technique made popular by La Flor Dominicana to indicate the strength of its cigars. The phrase grande bold on the primary band, complete with the head of a knight-in-armor also convey some strength, while the earthy brown wrapper is on the darker end of the spectrum, though the second isn’t quite as dark as I remember the first being. The roll is firm and the tube fairly dense, although the second sample shows a bit more give. Each roll is clean and capped well, with just a few veins providing visual variance. The aroma off the foot is cloyingly mild, with just a bit of sweet, cold sausage to it. The cold draw is again leaning towards the sweet side though far from overtly so. There’s not a lot of pepper or other discernible flavors in the slightly open draw, and certainly nothing that suggests pepper or strength other than just a slight tingle from the third sample.

After taking some time to get thoroughly toasted and burning, there isn’t a big blast of pepper from the start of the Micallef Grande Bold Ligero 552L, but that doesn’t mean it is lacking in that department. Within the first five or ten puffs, I get a mix of black pepper tingle and red chili pepper flake finish from the smoke. There is also a fresh cut wood characteristic to the smoke in the onset, with the specifics of the description more timber than lumber. While there is some strength to the cigar—a characteristic I’m paying special attention to given the ligero billing—it’s fairly mild, and the cigar’s overall profile isn’t coming out swinging and grabbing hold of the palate; rather it seems to be inviting the smoker to meet it halfway and engage with it beyond just the sensation of the smoke on the senses. While plenty flavorful, it’s also complex, balanced and just a bit reserved. The burn and smoke production have both been great in the first third. Entering the second third, there’s a bit more of an aromatic quality to the cigar, as slightly sweet cedar wafts up and fills the nose with an effervescent sensation, a stark difference from the more familiar punchiness of ligero-laden, full-bodied cigars. The body of the smoke backs down a bit in this section, and I’m left with a slightly thinner but no less flavorful profile. Just ahead of the midpoint, the smoke picks up some new brightness in the pepper, which is particularly noticeable and enjoyable on retrohales, if occasionally cough-inducing when that first ramp up hits without warning. As I’m puffing on the cigar in preparation for the second photo, I get a pronounced note of chocolate on my tongue, the first such appearance of the flavor. The back half of the second third brings about the return of the fuller-bodied smoke, yet the cigar still isn’t completely overpowering, something I feel hesitant to write lest I bring on a jinx and it decides to really ramp things up. Balance and complexity remain at the core of the profile, with some subtle sweetness beginning to appear as the final third approaches. The burn line continues to be even, the smoke plentiful and the draw smooth. While I had become a bit complacent with the profile of the Micallef Grande Bold Ligero 552L through the first two thirds of the first sample, the first puffs of the final third snap my attention into place with complexity and richness, something that is appreciated as opposed to the other—and dare I say more common method—of just heaping pepper into the equation. Now sitting at medium-full and nudging upwards, the cigar has rich earthy undertones with sipping chocolate sweetness and garnishes of black pepper for the palate and nose. The first puffs of the final third are also a great reminder that ligero-laden cigars are also generally ripe with sweetness, though it’s easy to overlook due to the pepper. Fortunately, this blend makes it fairy easy to identify and appreciate both. I’m not quite sure if the cigar is slowing down its burn rate or I’m slowing my puffing rate to savor each puff a bit more, but either way it’s a win as this third merits the time. There’s a bit of mint coming through as the burn line passes where the main band would sit, an interesting and new flavor that is welcomed though doesn’t stay long. The final puffs show a bit of bourbon barrel, woody and smoky with touches of char, all of which sit quite well on the tongue and further enhance the complexity of the profile. The burn, draw and smoke production are all quite good, and I’m left a bit sad to have to put the cigar down. 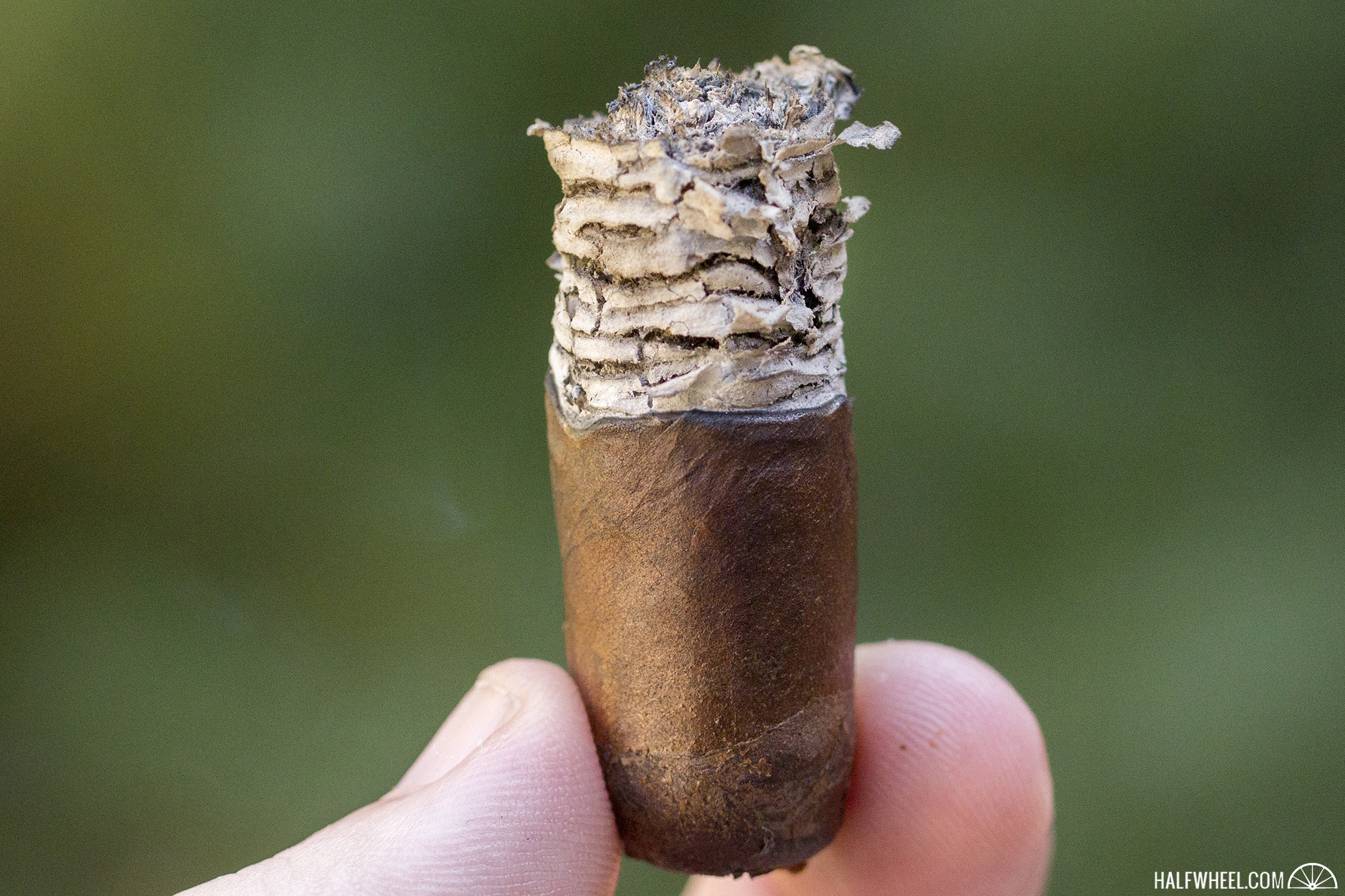 I could probably count the number of Micallef Cigars I have smoked prior to this one on one hand, and I'd likely have a few fingers left over, so my ideas of what this might be were fairly limited. That said, I was a bit conflicted by the billing of ligero on the secondary band, thinking this might just be a strength and pepper bomb that I'd have to suffer through. However, that preconception couldn't have been farther from the actual experience, as the blend lives up to another billing offered by the company, that it is trying to show the essence of ligero. Yes, there's strength and pepper, but it's balanced and restrained. There's sweetness to be found, not in heaps but in measured doses, a reminder that it is an integral component to well-grown and processed ligero. But most importantly, the cigar has complexity and approachability. It isn't trying to overpower the senses, but rather engage and excite them with nuance and depth. This is a very enjoyable cigar from start to finish with only minimal things with which to take issue.