The return of Steve Saka to the cigar world has been a well-chronicled one following his retirement from Drew Estate in 2013 to the announcement about the launch of his new company, Dunbarton Tobacco & Trust, in 2015 and the subsequent launch of his first line, Sobremesa, at that year’s IPCPR Convention & Trade Show.

While Saka rode out 2015 with Sobremesa as his lone released project, it was well known that others were in the works, either by way of filings with the U.S. Patent & Trademark Office or by sales sheets spotted at the trade show. In June 2016, Saka got more forthcoming about his sophomore release, Mi Querida.

The name translates as my mistress, a fitting title for a cigar from a man who makes no secret of his love affair with tobacco. The cigar is made at Nicaragua American Cigars S.A. in Estelí, Nicaragua, a factory with ties to the Oliva Tobacco Co. and a reputation for being more than capable when it comes to working with broadleaf tobacco, which the cigar uses for the wrapper.

Saka noted that the SakaKhan will likely be a Cigars International exclusive and the Short Gordo Grande will likely be a Famous Smoke Shop exclusive, “although both may opt to distribute them to other retailers.” 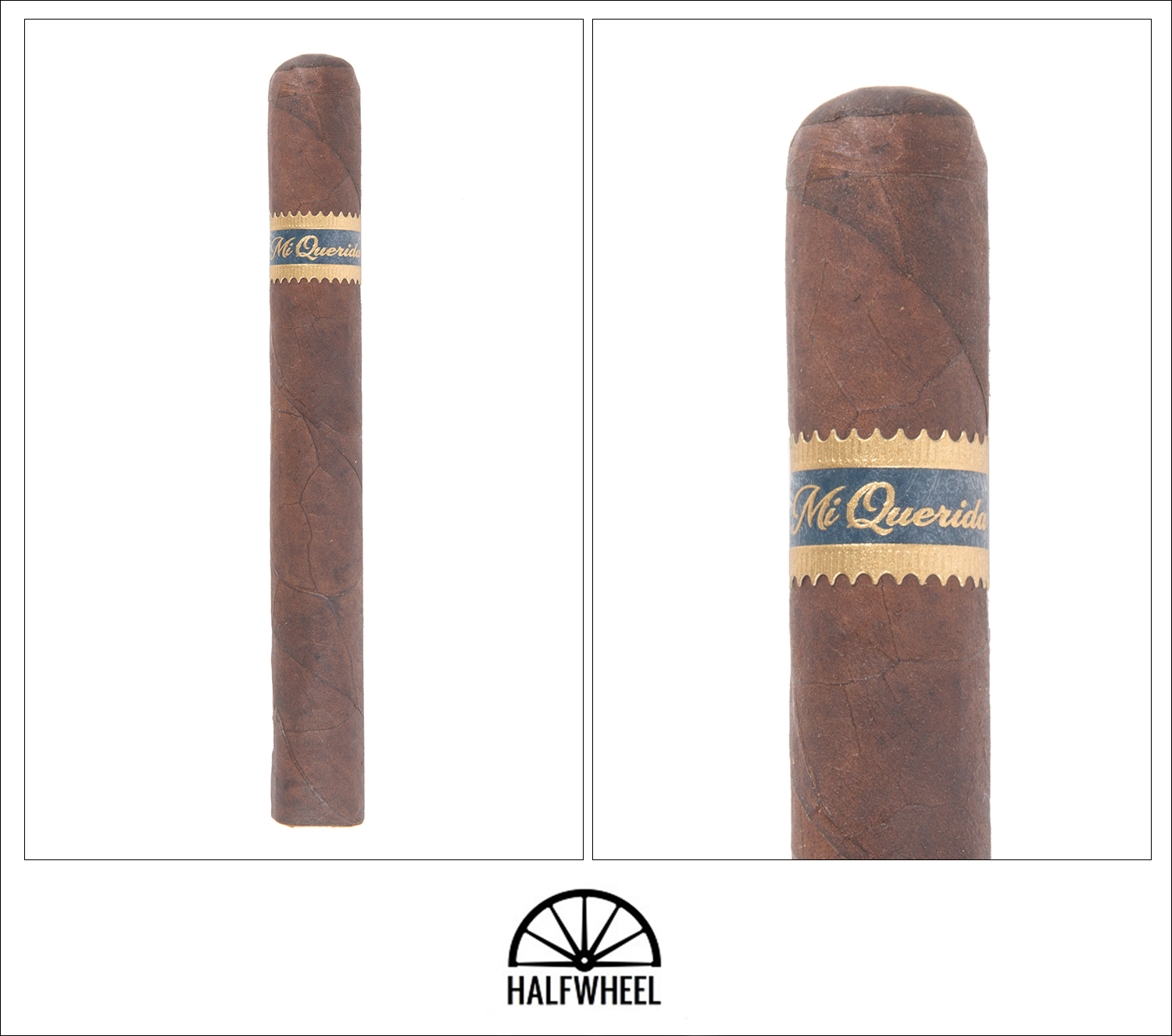 Let’s get three words right out of the way: dark, oily, toothy. As soon as I slid the first sample out of its cellophane sleeve, those three words came barreling into my mind. I could possibly add veiny to the list, though I think that might be an overstatement, especially compared to the other three, but it certainly is applicable. The first sample has a surprising gap in the application of the wrapper, seemingly the result of two large veins just close enough to each other to prevent a perfectly flat roll, though I am a bit surprised to see that it passed inspection as I could consider it to possibly raise some eyebrows. The other two samples are much better, and each shows a firm, even roll with just a touch of give. The foot offers notes of cool milk chocolate, cocoa powder, smoke, earth, coffee beans and pepper, though not in the copious and consistent amounts that the list my imply as each sample takes on its own mix of those notes. As for the cold draw, air moves near perfectly and the flavors run the spectrum from milk chocolate syrup to a sappy tree bark to cool coffee with cream, all with varying touches of pepper.

The first puffs of the Mi Querida are more chocolate sweet than anything, as the milk chocolate syrup note, something I’ve probably had embedded deep in my mind since childhood, is the first to grab my attention. Pepper does come along fairly quickly, and by the quarter-inch mark the cigar mark the cigar chocolate note has thickened a bit and begins an interplay with the pepper that should seem familiar to regular cigar smokers. There’s also a bit of physical reaction felt from the cigar in the first inch as it begins to show off its core strength. Depending on the sample, the pepper can take on a slightly charred characteristic, which adds gruffness to the cigar, a bit of irritation to the throat and a much longer lasting finish on the tongue, while also establishing that this cigar appears to mean business and will operate out of the medium-full and above range. The chocolate note continues to manifest itself via the aroma as a warm, gooey brownie, though my first retrohale is dominated by potent pepper that pulls no punches in the nostrils. The first clump of ash hangs on for over an inch or so, and its departure brings about a slightly lighter profile from the Mi Querida, still rooted in chocolate and pepper but beginning to show some Nicaraguan earth with a creamy texture to the smoke. Subtle notes of slightly over-roasted coffee also come in from time to time for even more complexity and texture. 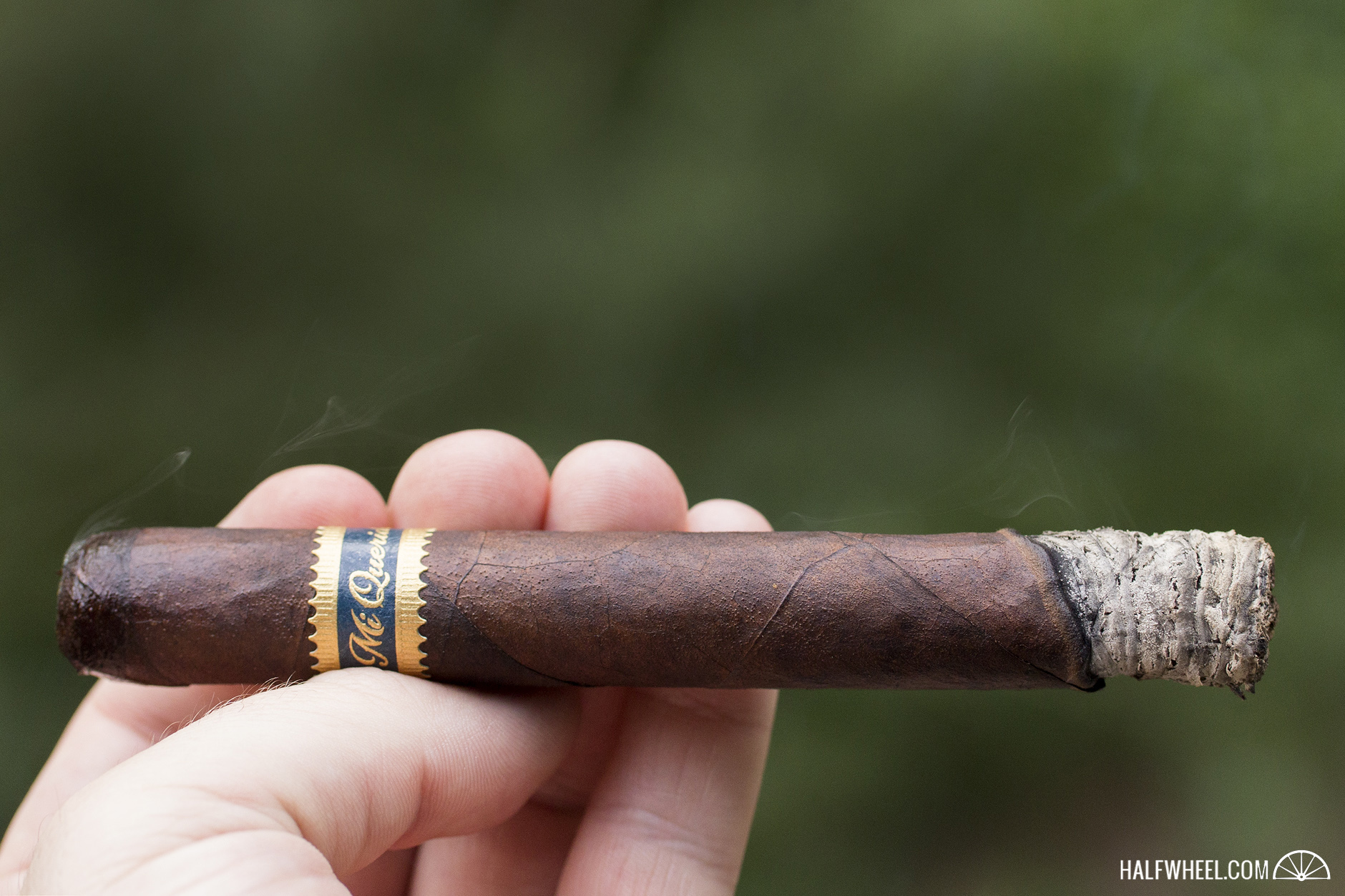 While there is still some roughness carrying over from the first third, the flavors begin to dial back their intensity at the start of the second third. For as vibrantly as the Mi Querida began, I find myself trying to process how it has managed to ever so slightly subdue the intensity without losing the flavor, and in one sample the lingering tingle of the pepper as it carves its way into my taste buds. The earth note begins to take over, though at several points it fights with strong drip coffee for the flavor lead, the latter being just a touch bitter and acidic in that wake-you-up way that certain coffee can be. Around the midpoint, a fantastic wood note that I can’t quite place comes through via the resting aroma; I want to say a warm and lush hickory at first encounter though I could be wrong. The intensity begins to ramp back up as the burn line sets its sights on the final third; earth comes in to give the profile some gravitas, while a bit of syrupy sweetness counterbalances the growing pepper on the palate while letting it punch away in the nose. 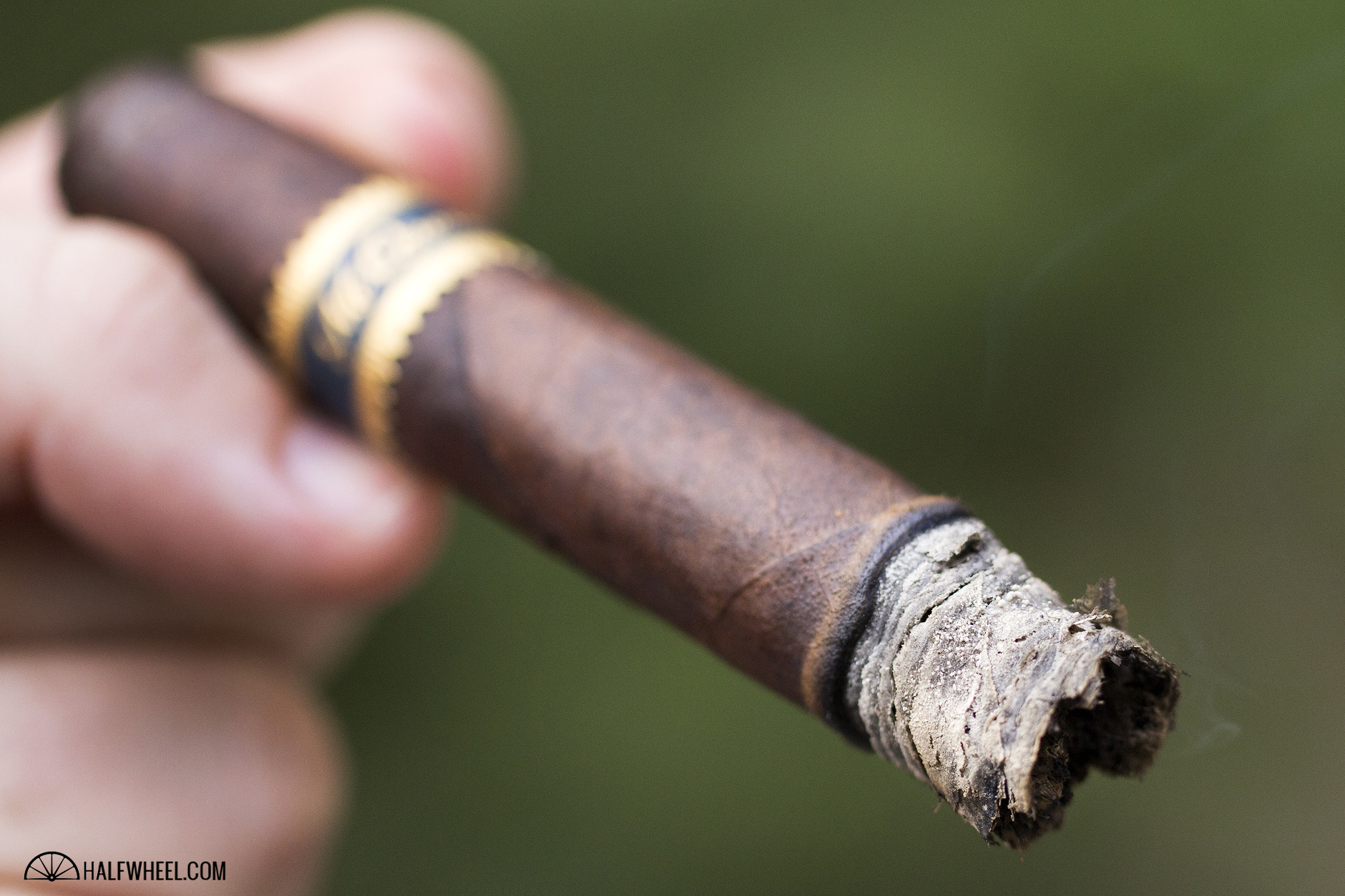 Without much buildup, the MI Querida Fino Largo ratchets up its strength at the start of the final third and is felt with much more intensity than it had been in the previous section. The flavors concentrate a bit as well, with a heavier profile marked by warm, rich chocolate, a slightly damp tree bark, damp soil and pepper that manages to stand out quite well despite being the fourth thing to come to mind. The burn rate seems to slow a bit in the final two inches or so, as each puff doesn’t advance the burn line like it did earlier and feels firmer than in the earlier sections. The cigar is showing a bit more earth, though it’s not quite as gruff as it had been earlier, while the chocolate has almost completely faded other than some very trace amounts. As for the pepper, it is prominent on first taste of the smoke but even more so on lingering tingles of the tongue. 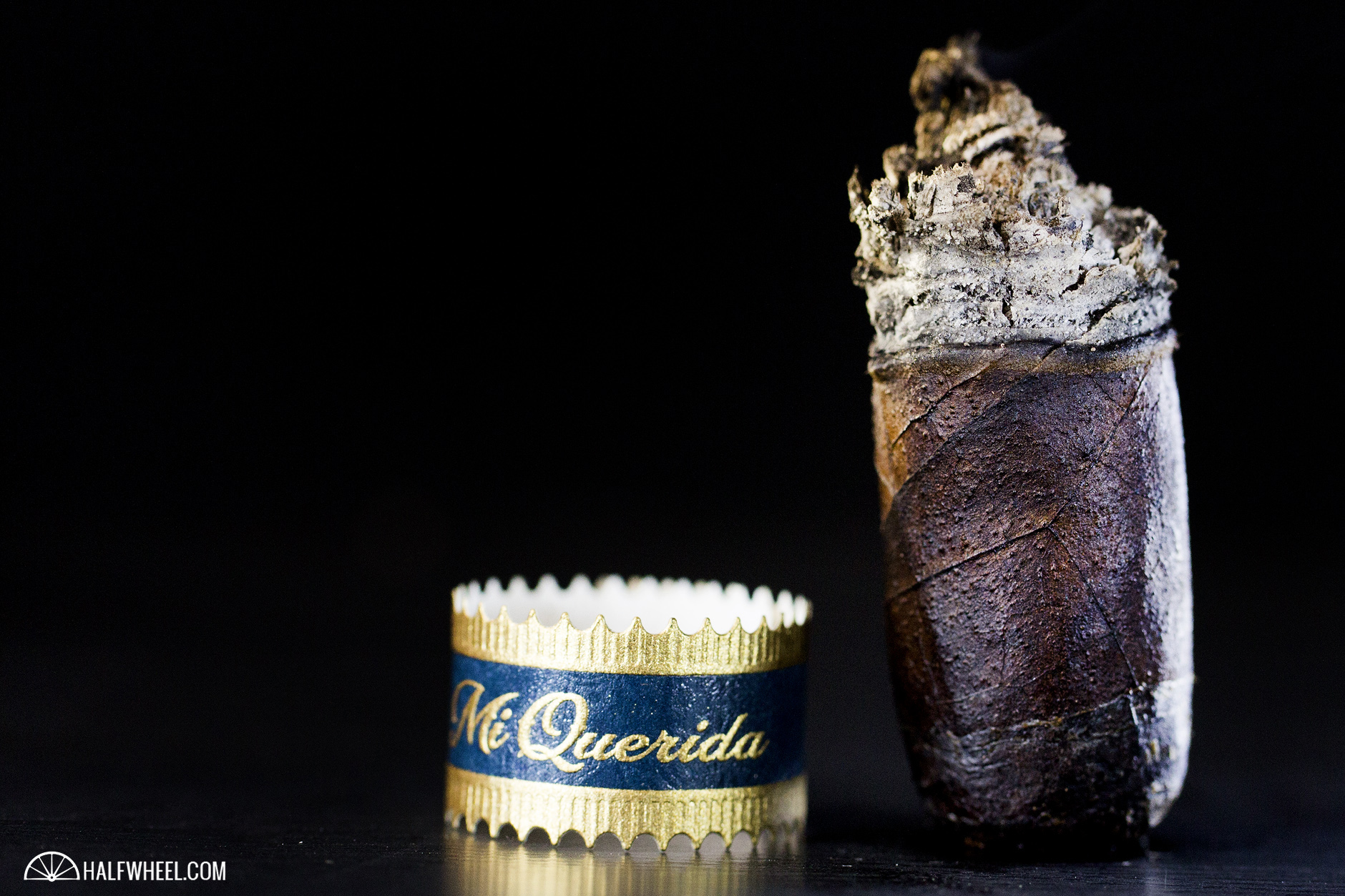 The thought of Steve Saka working with Connecticut broadleaf tobacco is one that got many cigar smokers excited, and after smoking three of the Mi Querida Fino Largo, I'm happy to report that the cigar lives up to seemingly whatever buzz has been building up around it. While it's not perfect and would certainly benefit from a bit more time to dry out, the flavors are serious and complex, upfront and aggressive while only occasionally overstepping, and rarely leaving the palate wanting more or less than what is being offered. When the situation calls for a cigar that's got more gravitas than what Sobremesa offers, Mi Querida is one that will almost certainly do the trick.