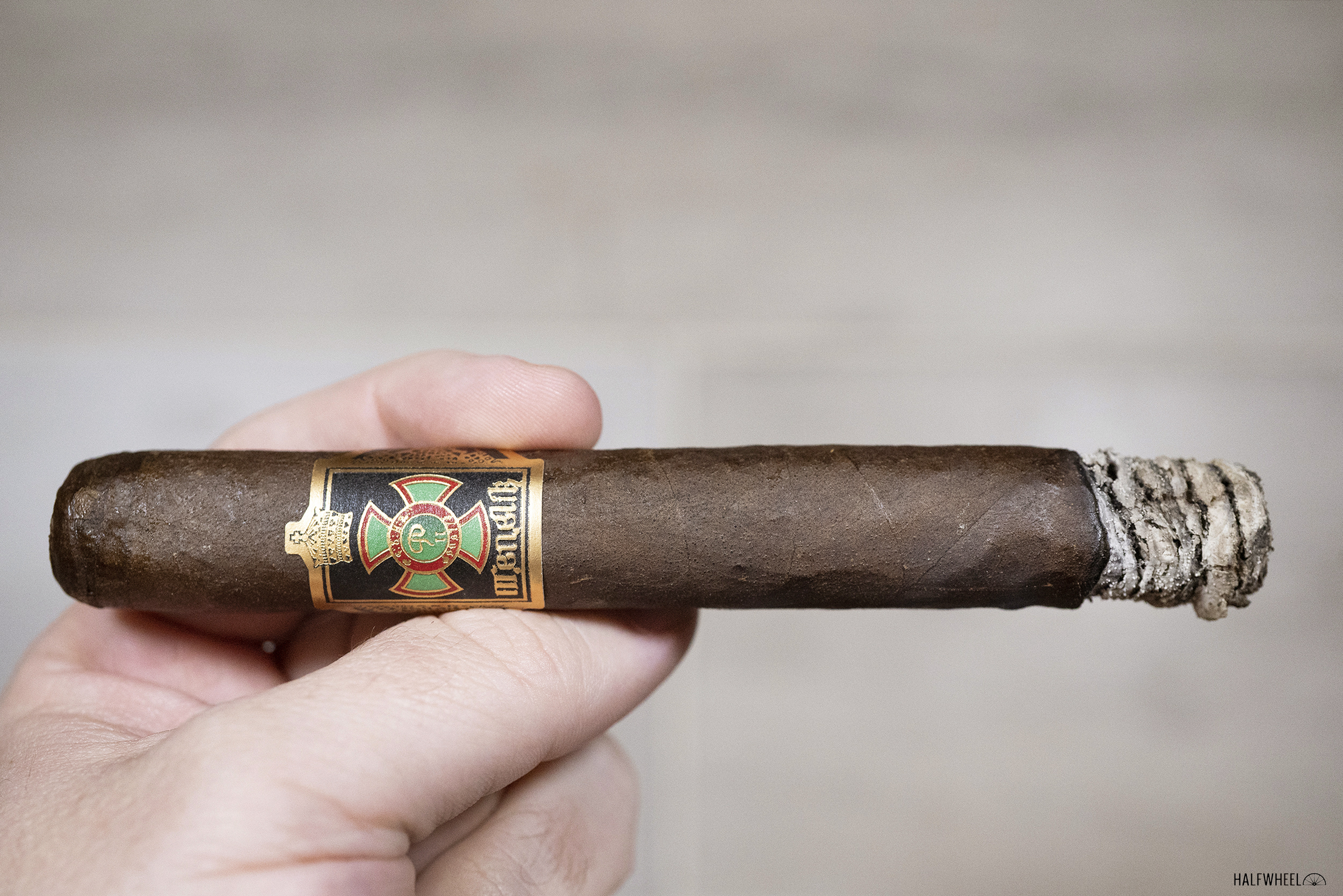 There are many ways for new cigar lines to debut, from full, widespread releases to soft launches that might see the cigars wearing special bands, to single store exclusives ahead of a wider release.

Then there is how the Menelik line from Foundation Cigar Co. debuted: as an event-only exclusive cigar, meaning it was designed to only be available through in-store sales events and used as a sales incentive.

Menelik was launchd in April 2017, released in a 4 1/2 x 52 box-pressed short robusto that came in paper-wrapped packs of five cigars. In June 2019, Menelik would go onto become an ongoing, for-sale cigar, though with production limited to 1,000 boxes of 12 cigars released each quarter. 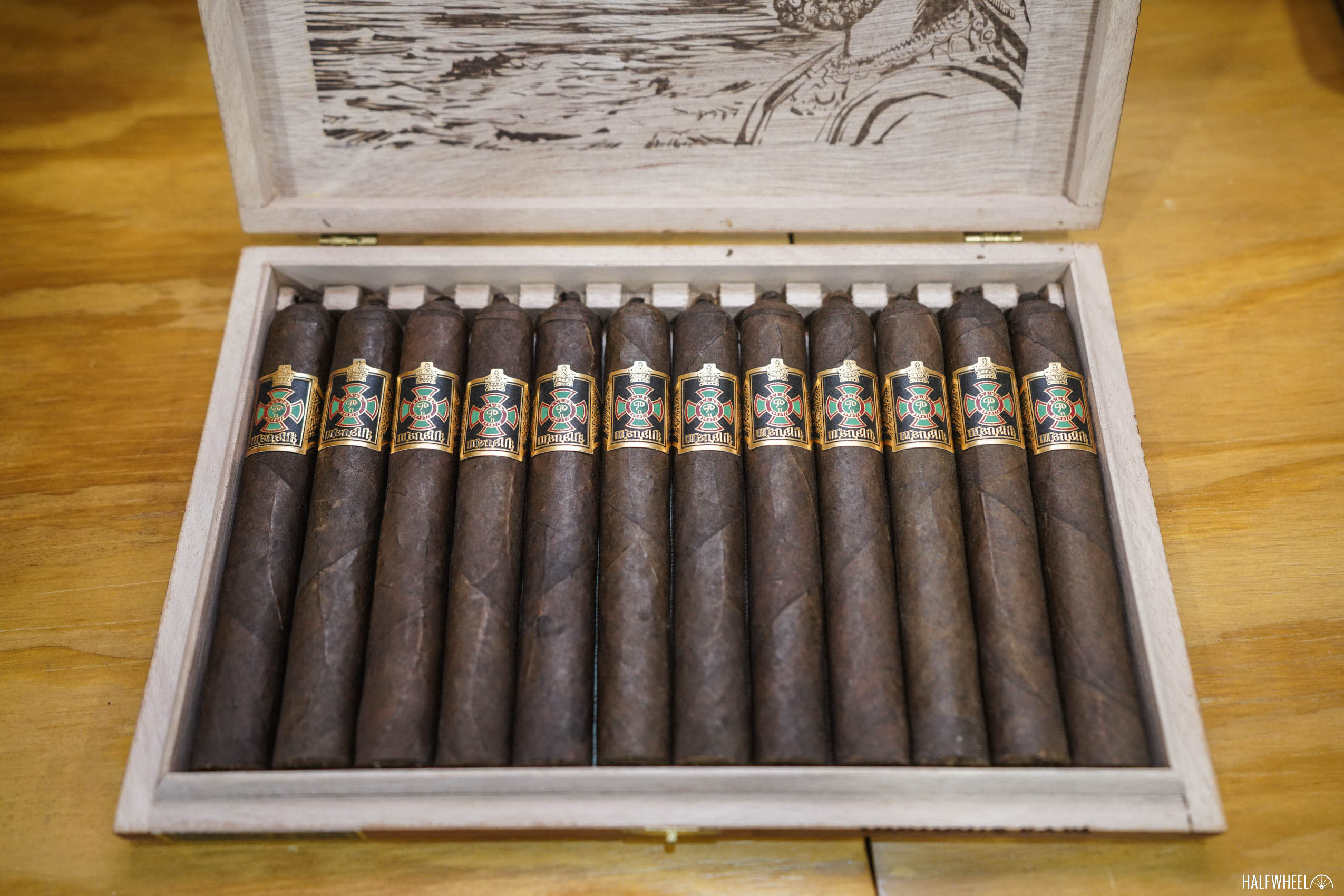 This year, the company added a new 6 x 52 toro, and like the original vitola, it gets a soft box press and sports a pigtail cap. It is also limited to releases of 1,000 boxes of 12 cigars, which are produced by AGANORSA Leaf’s Agricola Ganadera Norteña S.A. factory.

The Menelik blend uses a Mexican San Andrés wrapper over a corojo 99 binder grown in Jalapa, Nicaragua, while the fillers come from Nicaragua’s Condega, Estelí and Jalapa regions.

The cigar gets its name from Menelik I, the ancient ruler of Ethiopia who is said to be the son of King Solomon and the Queen of Sheba. Menelik also went by the name Ebna la-Hakim, which is Arabic for Son of the Wise, which relates to Foundation’s El Güegüense and The Wise Man Maduro releases. 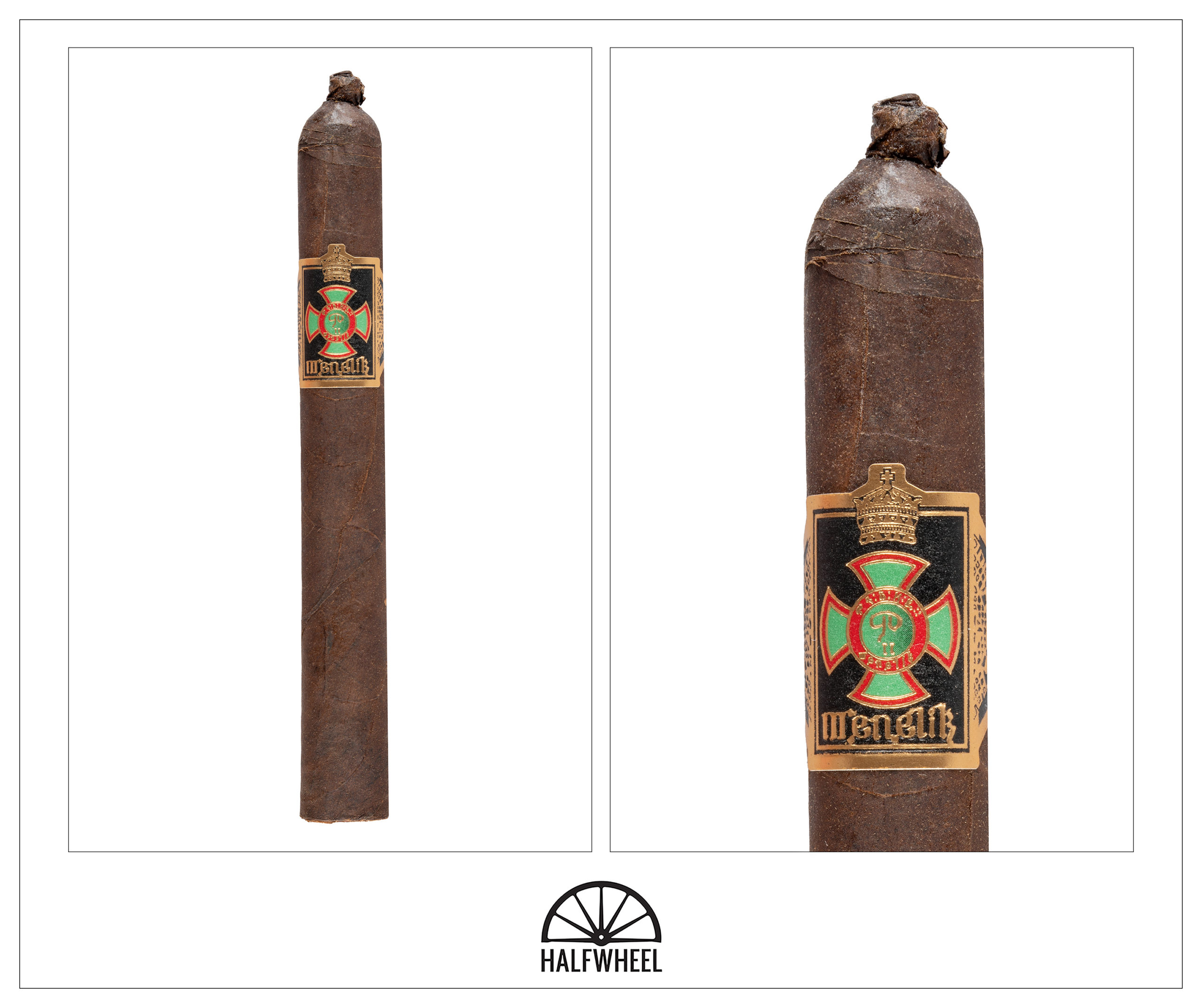 Once I take the Menelik Toro out of the cellophane, I take note of the press, which the company described as a soft press but feels a bit more pronounced. It’s by no means a hard press with sharp edges, but the press is immediately apparent. The tightly coiled bun of tobacco on the top of the cigar is a visual focal point for the cigar as well, and has an aesthetic symmetry to the band, as it sticks out from the cigar much like the top of the crown does from the band. While most box-pressed cigars have a firm, pillowy density, the Menelik Toro feels firmer than that, one of the more densely packed box-pressed cigars I have encountered recently. The cigar is rolled beautifully, with no visual issues whatsoever. The wrapper is a dark shade of brown, with a few very small veins, a fine toothiness, and only a slight bit of oil that I pick up more with my fingers than my eyes. The aroma off the foot is lighter than I would have expected, and certainly not as heavy or earthy as the color of the wrapper might suggest. There is a bit of sweet earthiness; between the three cigars I could make the case for a bit of mixed nuts and freshly cut tree scraps. While there doesn’t seem to be a lot of pepper, my nose ends up tingling and I even sneeze a few times, leading me to wonder just what is in there and eliciting this reaction. Each of the three cigars has a different aroma and I’m not sure which I like best, though I’m not crazy about the sneeze-inducing one. The cold draws range from a bit firm to outright firm, with the flavor a bit more meaty than the aroma, suggesting the center of a medium-rare steak most commonly. There’s touches of the woodiness here as well, though it’s more subdued than what the aroma offered, while one cigar has a subtle and fruity glaze.

The Menelik Toro takes a puff or two to get rolling, but the Menelik Toro starts out with a clean and robust flavor marked by burnt steak ends, middle-of-the-road earthiness, and a crisp black pepper. There are a few points where the start tastes a bit ashy, and when that flavor emerges it also has a short-lived drying sensation on my lips and the front half of my tongue. Thankfully it’s not a common experience, though one cigar had more than seemed necessary. Retrohales don’t have that ashy sensation, keeping the pepper prominent and impart a tingle throughout my nose. It took me until the third cigar smoked for this review to realize how dense the flavor is out of the gate, as the vibrancy somewhat masks it, but I keep returning to the idea that this cigar has a ways to go to unfold and blossom. By the time comes to knock off the first clump of ash, I’m impressed by how crisp both the retrohales and flavor are, though I’m not sure I’d would want them much crisper, as that sensation seemingly comes as a tradeoff for a more tongue-coating smoke. The retrohales also have a pleasing finish, which calls me back to passing the smoke through my nose to extend that sensation. On the whole the first third is enjoyable, though has me looking forward to see if the cigar will unpack its tightly packed flavor profile, hopefully during the cigar as well as after an extended period of rest, as I’m already thinking about a redux for this cigar. Flavor is medium-plus, body is medium, and strength is medium-minus. The draw across the three cigars is firmer than I would like, but combustion, the burn line and smoke production are all fine.

The second third starts off by further tightening up the flavor, not necessarily changing it but distilling it a bit and delivering a dense smoke with dry earth and a fine black pepper that isn’t high on the intensity scale but isn’t shy about going after the taste buds. Retrohales are still my favorite interaction with the Menelik Toro, as they feel a bit more unpacked than the flavor, which still has a density that challenges both my taste buds and my brain. The cigar adds some creaminess not too long into the second third, which helps the cigar with complexity and depth, though it still feels like there is a long way to go for the Menelik to really show it has everything to offer. The midway point sees the cigar finally reach a level of creaminess where it is prominent enough to stand out on its own, while the crisp black pepper remains fairly sharp and focused on the senses, making for an interesting back-and-forth between these two main components. Past the midway point, the Menelik Toro feels like it has turned a corner because of the creaminess, though that creaminess departs from the profile not long after, clearing the way for a dry, occasionally rocky earthiness to move into the lead role. There is still some black pepper in the profile and once again the retrohales show a more detailed and nuanced expression of the blend than what my taste buds are able to discern. As the second third begins to wrap up, the flavor picks up a bit of damp woodiness, which helps soften the previously dry flavor, and helps add a bit more diversity to the flavor. It is still medium-full with mellower spots that are closer to medium, body is medium and flavor is medium with some stronger puffs. Construction and combustion have held fairly steady, meaning a draw on the firm end of the spectrum but no other issues. 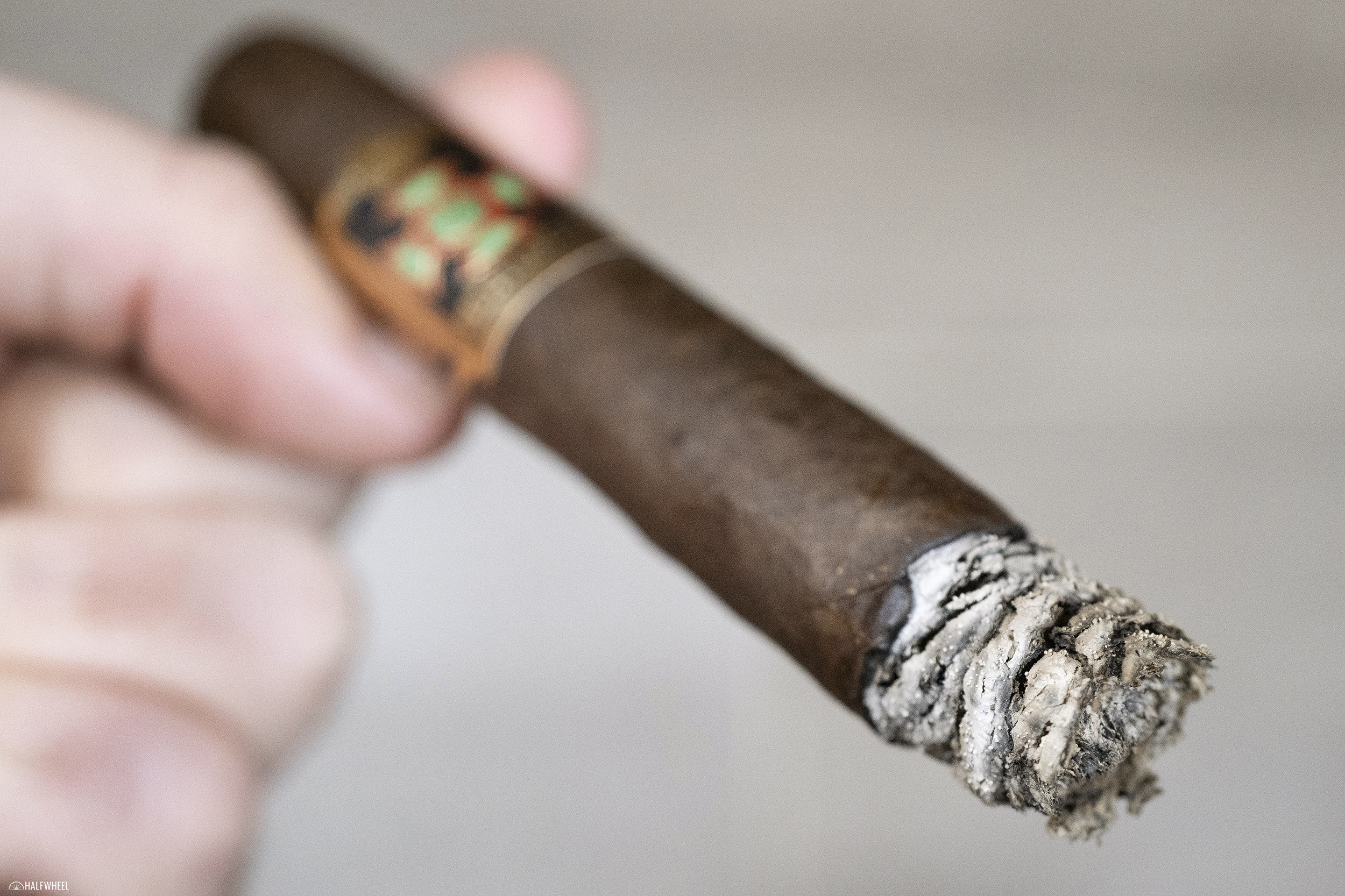 The earthiness of the profile intensifies as the final third gets underway, staying on the dry side and still what I’d call middle-of-the-road in terms of its depth and richness. The woodiness returns as well and has shed its dampness, with bits of rockiness, nuttiness and black pepper providing undertones and accents. While the nuttiness catches my attention as a new addition, the reduction of the pepper is noticeable as it had been a more prominent part of the profile. That leads me to take a retrohale to see if the effect is present there, which it’s not. Passing the smoke through my nose generates a decent tingle that packs an extended, lingering tingle. When the burn line hits the spot where the band would be, I begin to feel a bit of fatigue setting in, something I attribute to the firm draw, which has pushed the cigar’s burn time just north of the two-hour mark and it feels like there’s still a decent ways to go. The dry, rocky earthiness begins to rise up in the profile, and now brings the woodiness and a bit of a waxy finish along with it for a couple of puffs before the profile suddenly softens and reminds me of a moist chocolate brownie but still offering a good amount of black pepper. That new profile takes the Menelik Toro to its conclusion, with a bit of heat now on my tongue from the intensifying pepper. Flavor finishes medium-full, body is medium-plus, as is strength. Construction and combustion don’t change much outside of the one cigar that had its draw open up a tick or two, as the burn line is still fairly even and smoke production is good. 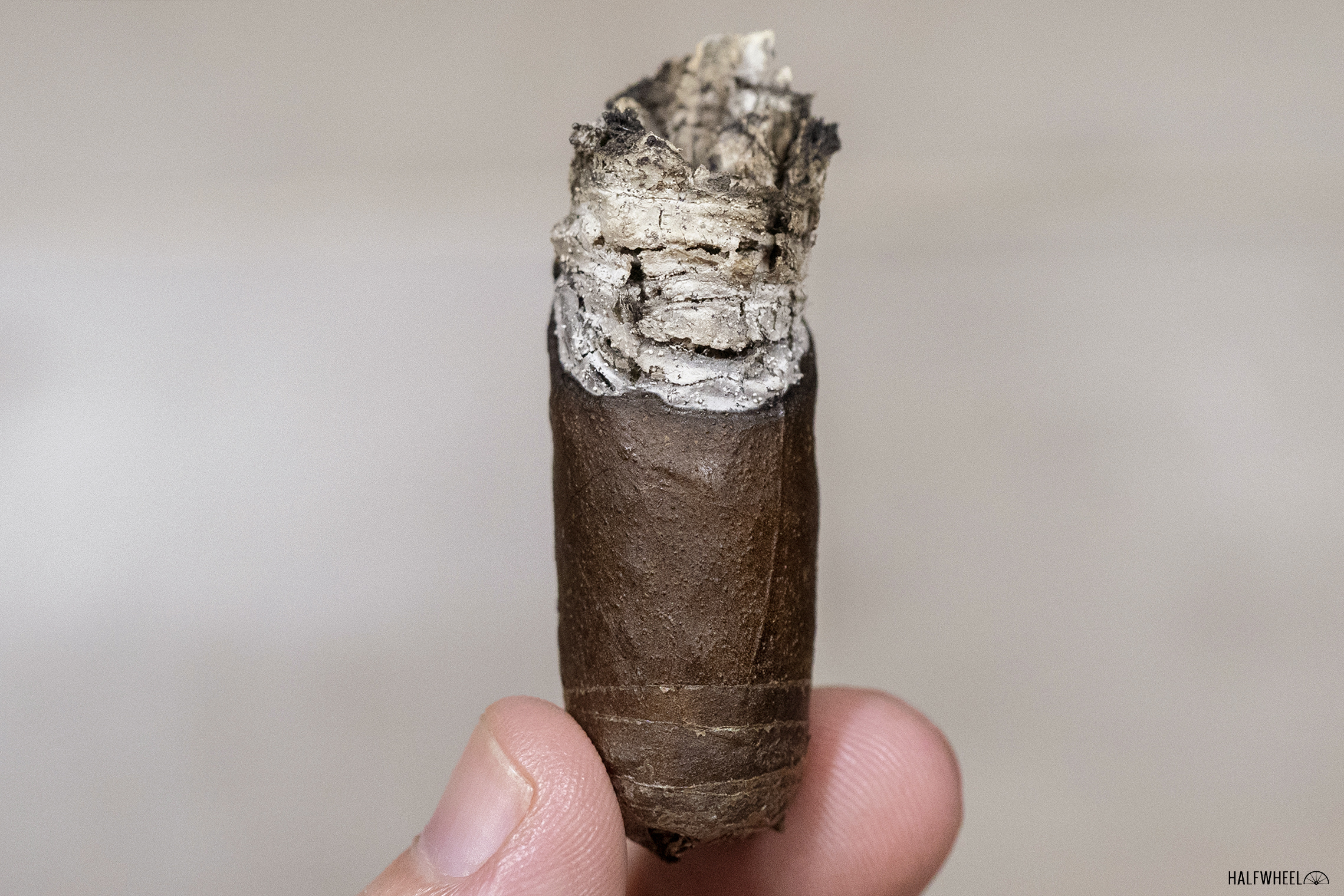 It was shortly after smoking the first cigar that I realized that the Menelik Toro was going to be a good candidate for a redux review. While it offers a good flavor profile at the moment, it also seems to be fairly dense, almost tight with letting all that it has reach the taste buds, something that almost feels like it limits the cigar to familiar flavors and keeps any subtler nuances locked away. If time helps loosen things up and allows the flavors to blossom, this could be a very impressive cigar.