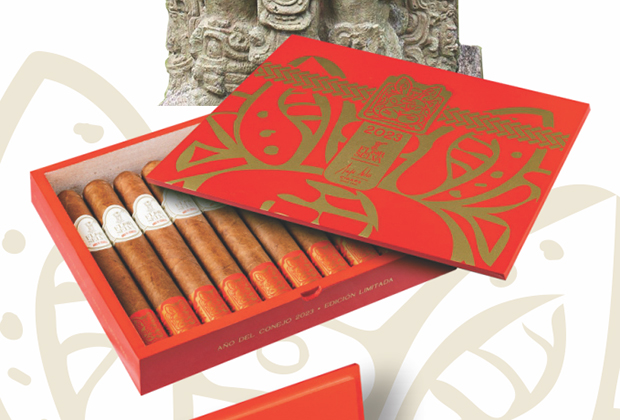 Maya Selva will once again be releasing a cigar that both celebrates Chinese New Year and pays tribute to the Mayan culture and heritage of Honduras.

With the Year of the Rabbit coming up next on the zodiac calendar, the cigar is fittingly named Año del Conejo 2023. In tying in Mayan culture, it celebrates 18 Rabbit, the 13th ruler of Copan, who ruled from 695 to 738. He was known for the number of structures and monuments created during his reign, and is considered to be one of the greatest patrons of the arts in the history of Copan, according to the an announcement from the company.

The cigar is a Honduran puro that is offered in a single 5 1/2 x 48 corona. The wrapper comes the Jamastrán region, while the binder comes Azacualpa in Olancho. The company calls it medium in strength with a profile marked by woody, earthy and nutty aromas.

It will be offered in 10-count boxes, but the company has not yet announced pricing, a release date, where it is being made or how many cigars are being produced. It does describe Año del Conejo 2023 as a limited edition, however.

This will be the sixth release in Maya Selva’s Zodiac Series, which debuted in 2018 with the Year of the Dog.