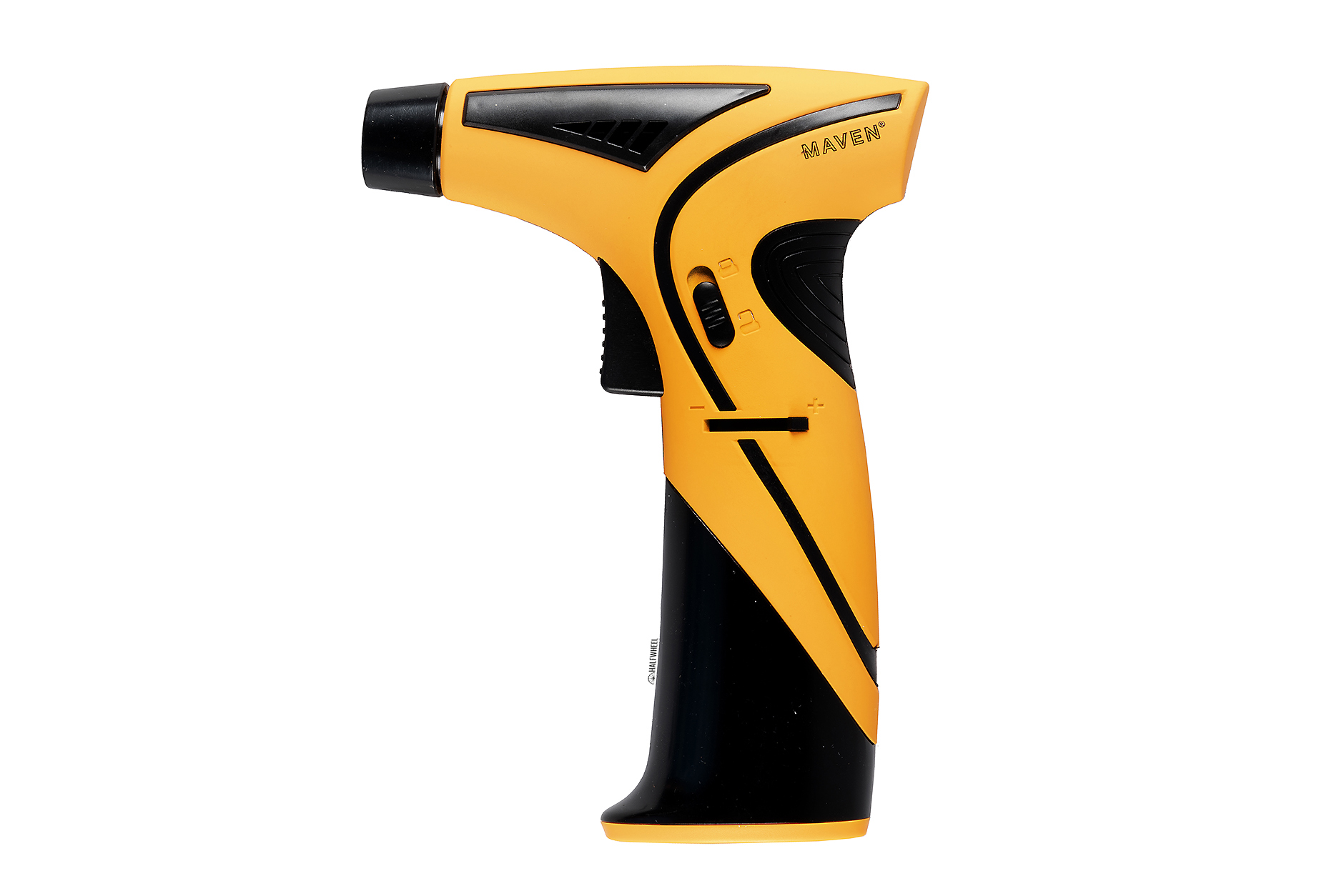 When it comes to picking lighters to review, I’m generally selecting from a fairly small group of companies, many of whom you could probably name because they are so commonplace in your local cigar shop as well as the catalog and online retailers. That’s part of the reason why I like to review at least one or two lighters a year from a non-traditional cigar accessory company. And to go along with that, I like finding companies who are making lighters but not really known by cigar smokers.

At the 2022 Tobacco Plus Expo, held in Las Vegas in late January 2022, I took a stroll around the non-cigar portion of the show, which is where the tobacco alternative and vape companies exhibit their products. As I was finishing up that stroll, I came across a company with a sharp-looking booth loaded with lighters and a name I’d never heard before. That company is Maven.

Maven is based out of Los Angeles and offers an interesting mix of products. The company was launched in 1989 under the name Eternity Torch Lighter, USA, and says that it is “proud to provide the most premium products with the most competitive price for everyone globally. We strive to disrupt the lighter market with great design, great quality, great pricing and great customer service.”

Most of the lighters released under the Maven name seem like they aren’t geared toward the cigar industry but rather to those who use cannabis and its derivatives. Maven has a sister brand called Xuper that offers lighters that seem more cigar-friendly, as they are smaller and very reminiscent of many of the value-oriented lighters sold by JetLine, Lotus’s Vertigo brand or Colibri’s Firebird brand. That said, fire is fire, and you can certainly light a cigar with a Maven lighter. The Maven Space is a tabletop torch lighter with a very large single torch flame, which is lockable and allows for hands-free operation. Beyond that, it does not offer any features other than a flame adjustment lever.

According to the company, the Maven Space is made from a zinc alloy and metal, with a rubber and metallic finish. It measures about 6 3/4 inches tall, just under 5 inches wide, and 1 1/2 inches thick at the base. At 9 ounces in weight, it is a fairly hefty lighter in the hand, certainly matching up with what you might expect from a tabletop lighter. The Maven Space works by simply squeezing the ignition trigger, which starts the flow of butane and provides the spark to ignite it. You are able to lock the flame in place with a latch mechanism that doubles as an ignition lock to prevent accidental ignition. To extinguish the flame, simply let go of the trigger and the flame goes out. From a lighter perspective, it’s hard to say that there is anything that makes this truly special. The Maven Space is a large, single flame torch lighter, and that’s about it. This style of lighter is something you can find from any number of manufacturers. If anything, the most unique thing about this is its design, which is on the more modern side of the spectrum, especially next to the competition. There is no shortage of options that fall into the category of freestanding lighters with a large single flame torch. Here are some of the closest competitors to the Maven Space: No, at least not for the purpose of lighting your cigar. The Maven Space works well enough, but as I suspected when I came across it on the blue-carpeted portion of the 2022 Tobacco Plus Expo, this is a lighter that is simply targeted at a different market. With the exception of the thickest and heaviest tobaccos it simply offers too much flame for most cigars. I’m generally a minimalist when it comes to torch lighters, and if matches or soft flames were more practical, I’d probably use them more than I currently do. While I like the ergonomics and the price point of the Maven Space, I have a feeling this would be better off in a kitchen drawer or my toolbox rather than near my cigars.