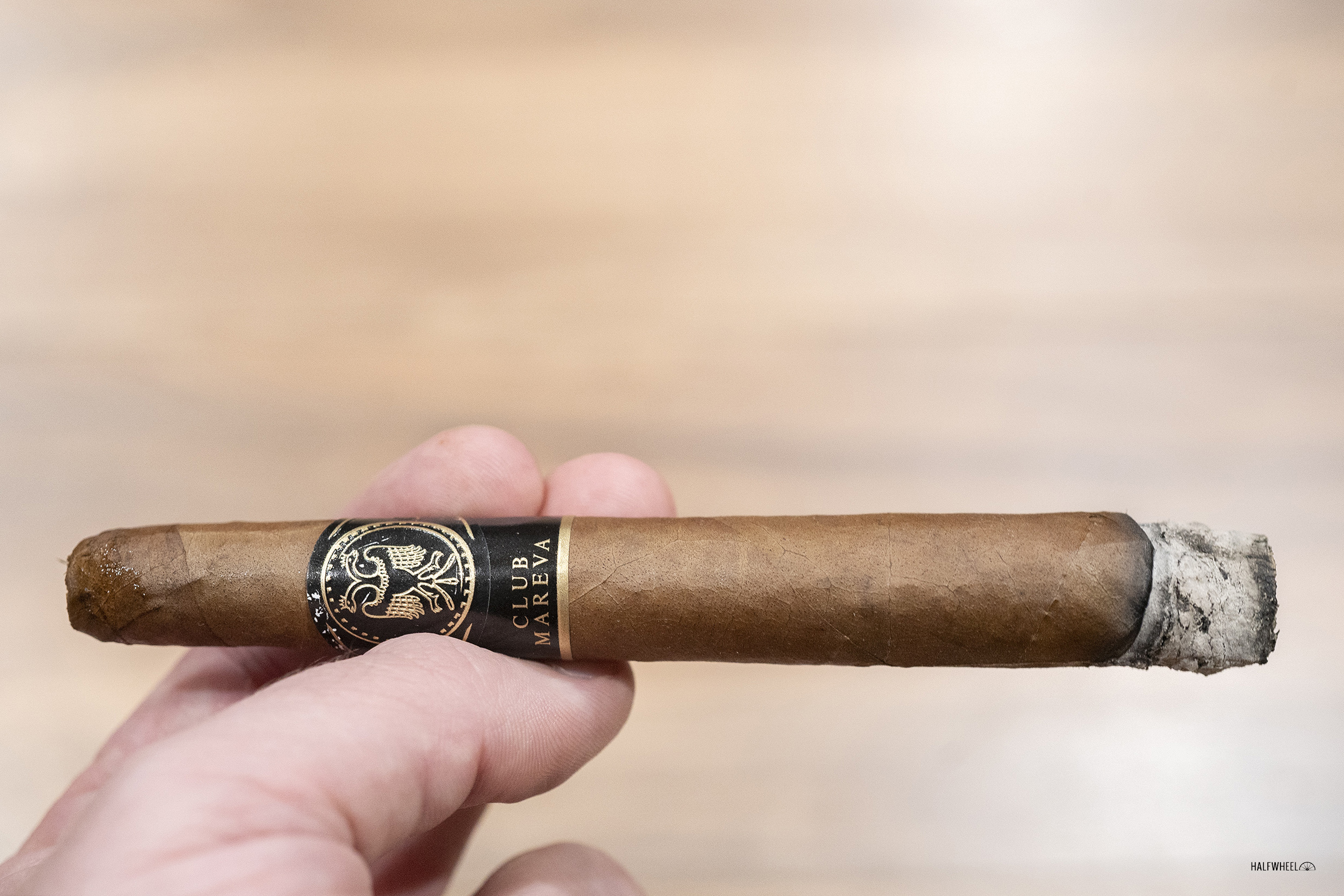 Even though I am someone who covers the cigar industry on a daily basis, there will be a cigar that shows up on my review list that I seem to know nothing about. Such is the case with this cigar, the Mareva Spalato No.2.

It is a cigar that is part of the Casdagli portfolio, and specifically part of the company’s Club Mareva line. The name comes from Cigar Club Mareva in Split, Croatia, which you might know as being the home of the Cigar Smoking World Championship, an event that pits competitors from around the world in a battle to see who can smoke a cigar for the longest amount of time without it going out. It is an event that Rocky Patel has made a cigar for, the aptly named Rocky Patel Cigar Smoking World Championship, which has a vitola called the Mareva.

Marko Bilić of Cigar Club Mareva picks the blend for the Mareva Spalato line with the No.2 using an Ecuadorian corojo wrapper, a Dominican binder and fillers from the Dominican Republic and Nicaragua. It’s a change in wrapper leaf from the Mareva Spalato Limited Edition, which debuted in 2017 and used a Dominican wrapper, although the binder and fillers are the same. Both cigars are made at the Kelner Boutique Factory in the Dominican Republic.

The Mareva Spalato No.2, which comes in a 5 1/2 x 50 piramides vitola, is an annual but limited release with production limited to 10,000 cigars. It is offered in boxes of 15 cigars, with a single stick MSRP of $24. 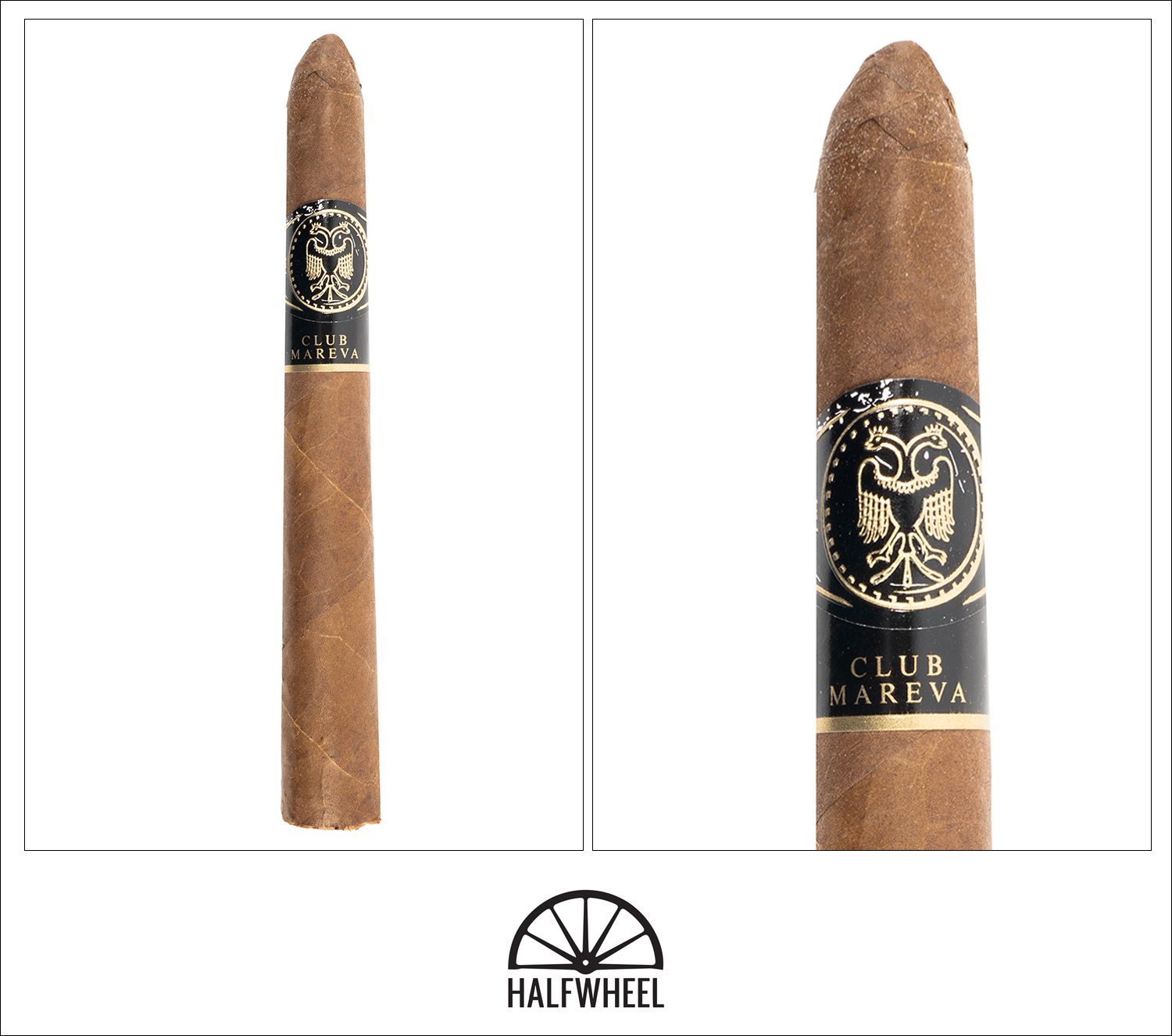 For as much as I have come to roll my eyes at the 6ish by 52ish toros that seem to dominate humidors these days, the 5 1/2 x 50 piramides vitola of the Mareva Spalato No.2 definitely gets my attention. Even among a class of fairly common figurados this cigar would stand out thanks to its gentle but very noticeable taper from the foot to the head, a change that has it just a bit bigger than a lancero once the cap is clipped. Beyond the shape, the wrapper is an evenly colored shade of medium brown, and while it doesn’t have a lot of oils I do pick up a few specks of crystallization. Veins are small and the seams lie flat, with only a bit of leaf maneuvering noticeably toward the head. It’s a well-rolled cigar, though a bit of softness above the band of the first cigar catches my attention. The foot has a leading aroma of wood flooring that makes me think back to one of the houses I grew up in, followed by a bit of candy sweetness and a familiar tobacco smell. At times I also find a bit of baking spices in both smell and texture, though the former is quite mild. The cold draw is remarkably smooth, even with the taper, and also remarkably neutral, making me think of a plain cake donut at first. I could make arguments for a bit of creaminess and even some banana, but both are quite mellow.

Consider me puzzled by the first puffs of the Mareva Spalato No.2; I thought I was heading down the familiar path of a bit of woodiness and pepper to start, but that’s not what materializes. Those flavors are there but there is also something throwing them off a bit, something that almost has the flavor of a liquid medicine. I’m not sure that’s exactly it, but it is the first thing that comes to mind. It’s something that doesn’t taste great and has been modified to be palatable, and while it is palatable, I can’t say I’d want a lot of it. Thankfully it is only really present on one of the cigars, while another sees the wood get funky but not medicinal. Either way, the flavor rights itself rather quickly, smoothing out and delivering some of that cake donut flavor I picked up before lighting the cigar, along with a bit of creaminess that leaves that funky flavor well in the distance. Retrohales have a nostril-tingling pepper that really fills the nose, with the sensation really making the most out of what the smoke has to offer. But it’s also not a singular sensation, as there is nuttiness and creaminess not far behind. Flavor intensifies fairly quickly once the first clump of ash drops off, and while it doesn’t necessarily change, it is much more on my palate than it was in the first puffs. After a bit of a wavy start by the burn line, it corrects itself and the construction is very good. The draw might be a touch loose but it is still smooth and doesn’t seem to be affecting anything. Flavor is medium to medium-full, body is medium-plus and strength is a bit shy of medium.

A bit of black pepper and woodiness take the reins at the start of the second third, though the Mareva Spalato No.2 still has a good bit of creaminess, and when that is abundant the overall flavor is in a very good place. It also makes for a near perfect combination of texture and draw, offering the kind of mouth-coating sensation of a slightly melted milkshake hitting the tongue. Approaching the midpoint, there is a bit more of a toasty flavor to the profile, and while there is still some dry wood, the slightest bit of sourness has latched onto it. It doesn’t stick around long, and as the wood becomes drier it stands out more on the tongue, eliciting a new physical reaction. There are flirtations with nuttiness, though they never outshine the pepper that has quietly worked itself into the forefront of the flavor after being the standout of the still very enjoyable retrohales. This section finishes up with more of that cake donut flavor and now just a bit of light roast coffee, an interesting and familiar combination. Flavor is medium-plus and more consistent in its intensity than it was in the first third, while body is in that same medium-plus territory. Strength has nudged up to medium, though there isn’t much being felt in the way of nicotine. 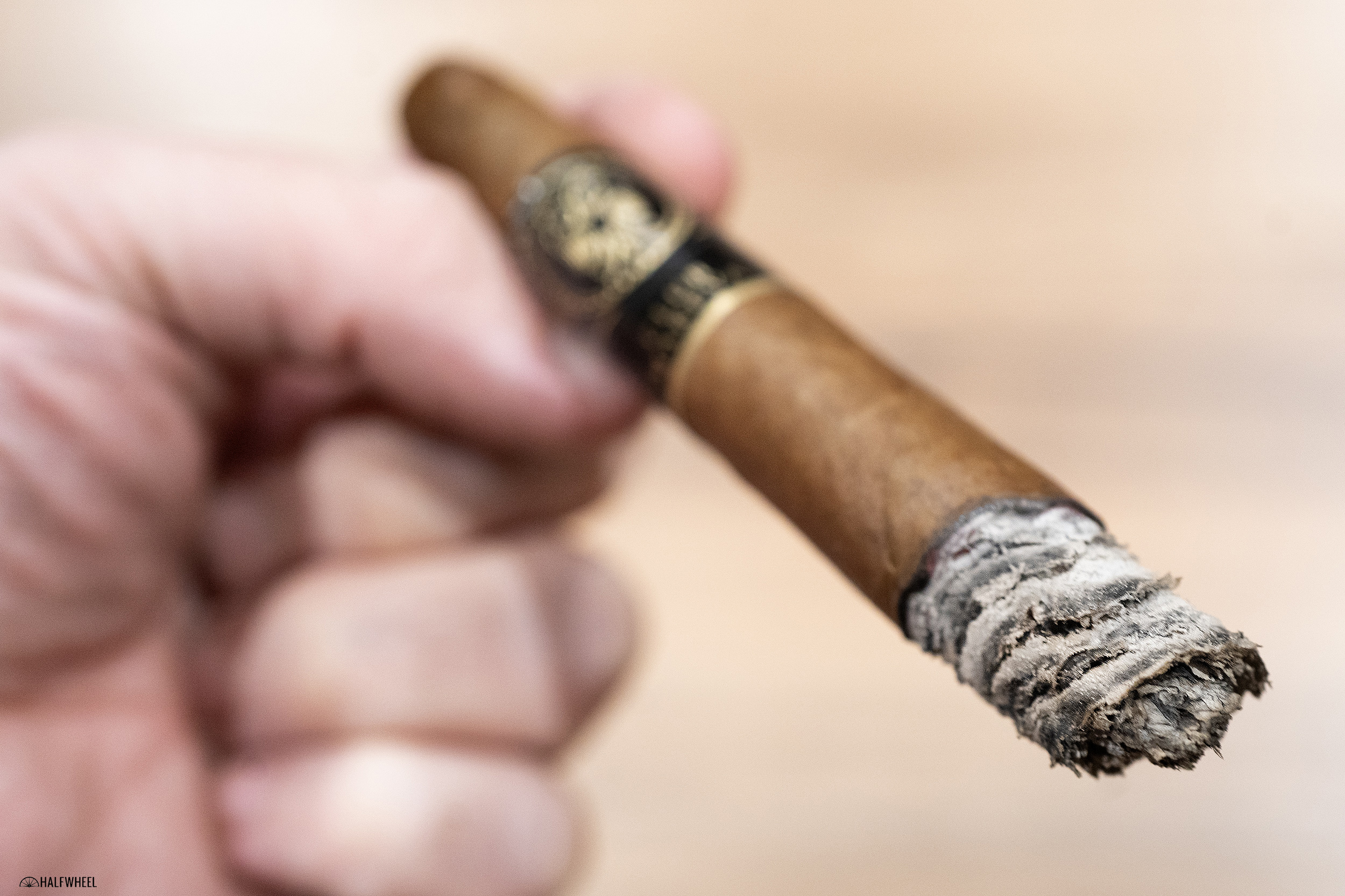 The final third begins with a bit more of the coffee flavor, but in particular, the acidity that comes with what I would refer to as generic bulk coffee. It’s light and doesn’t convey the full mouthfeel of coffee, and it also doesn’t stick around too long, yielding the floor back to dry wood that has been a steady contributor to the profile. It’s the kind of flavor you might associate with bulk-pack kindling, the kind of stuff I remember picking up at the grocery store from time to time. There are also some notes where the nuttiness gets a bit out of hand, with an almost aggressive peanut flavor at times. The flavor gets just a bit aggressive in the final inches, irritating the throat ever so slightly as the burn line progresses into the slenderest part of the cigar. Burn remains fantastic, as do smoke production and combustion. Flavor finishes medium-full, body is medium-plus and strength is medium at best. 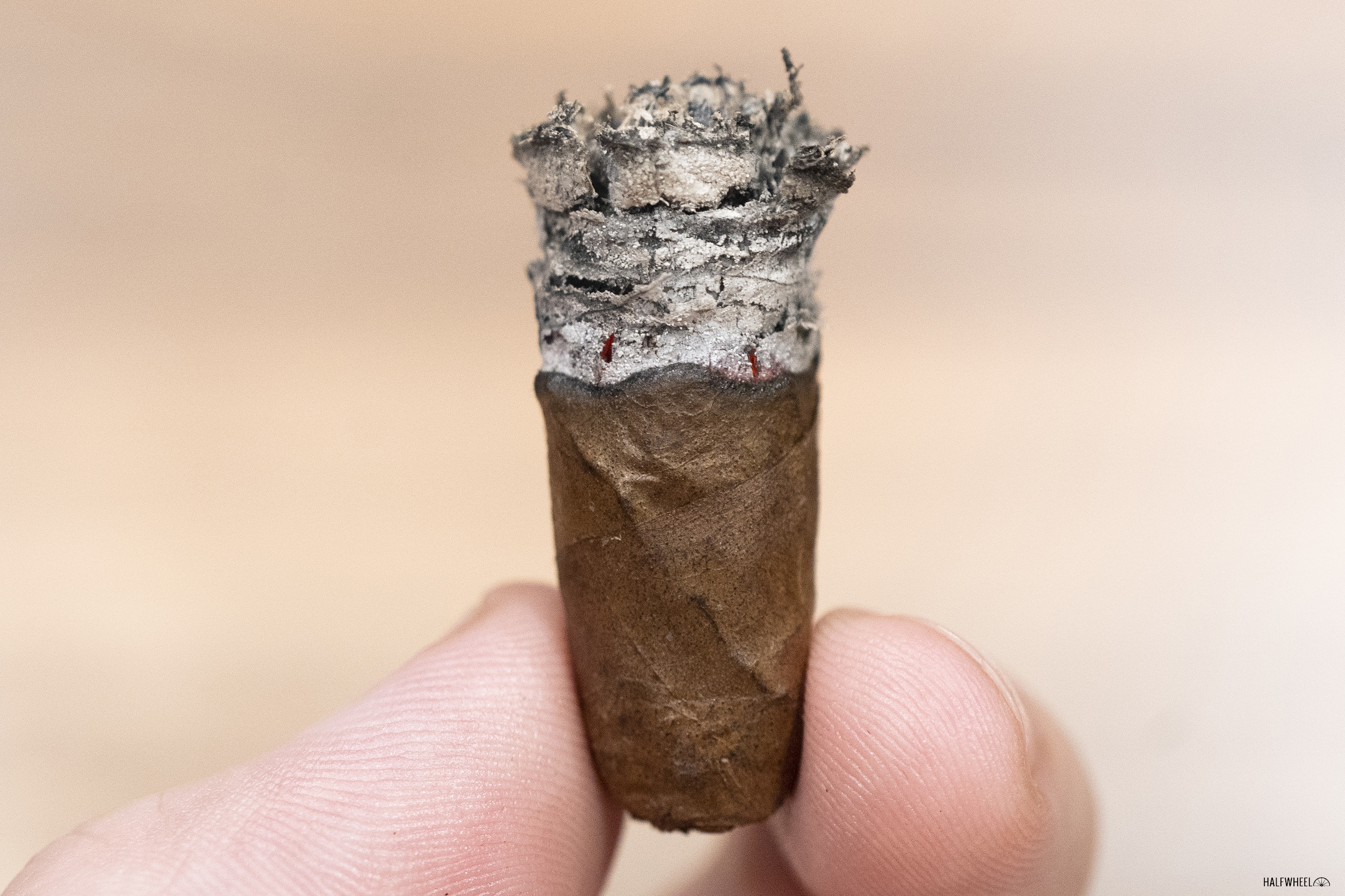 If you're familiar with the process of looking for a new residence, you've undoubtedly visited places where you love some of it, you like some of it, and you're to so crazy about the rest of it. Such is how I feel about the Mareva Spalato No.2. The first puffs are head-scratchers, both at the moment and when viewed through the context of the rest of the cigar. Yet get a few puffs into the first third and the opinion changes. Get into the second third and "this is good" turns into "this is really good." Keep progressing it and that feeling generally grows, even with some spots where I wish things could be a bit smoother or more balanced. But get to the final third, and it's back to a feeling of "not bad but could benefit from some touch-ups to be really great." Overall, the impression is favorable, and while we don't factor price into scores, I'd have a hard time justifying the cost. But dollars aside, it's an enjoyable cigar that is worthy of consideration if you feel like trying something that you're not likely to find at your local humidor.