You’ve probably heard this introduction before: Crowned Heads releases a new line via a soft-launch to a few stores prior to a widespread release the following year. It seems to be the case with many of the company’s new cigars, and it is once again the case with Luminosa. Though this time, FDA regulation has added a second round to the limited release process.

While the cigar got its first shipment at some point prior to FDA’s Aug. 8 deadline to have products on shelves without needing the agency’s prior approval, Crowned Heads didn’t formally announce Luminosa until late October. The Nashville, Tenn. company once again worked with Ernesto Perez-Carrillo, Jr. and Tabacalera La Alianza, S.A. in the Dominican Republic, creating a blend without much in the way of details, other than that it uses an Ecuadorian Connecticut wrapper.

“Luminosa fills a void that was lacking in the Crowned Heads portfolio of blends,” said Jon Huber, Crowned Heads co-founder, to halfwheel at the time of the cigar’s announcement. “An easily approachable smoke—something mild (if I’m allowed to say that word post August 8) to medium in body, that can be enjoyed both with a morning coffee as well as with an after dinner dessert.” The Luminosa has an attractively tanned shade of brown, almost butterscotch in hue, and the band does a nice job of accentuating—or maybe just suggesting—some orange and gold tinges in the leaf. It’s a firm cigars and while it’s rolled well, I can feel some bumps from underneath the wrapper, which is soft and supple if a bit dry on the fingers with small veins. The foot offers some light dried mango sweetness and even lighter dry cedar or lumber smells. The cold draw is near ideal in terms of air flow yet incredibly nondescript in terms of flavor. There’s a bit more of the lumber note but otherwise it tastes of light and slightly sweet tobacco.

Building on the wood notes picked up from the cigar prior to lighting it, the Luminosa opens with a bit of damp lumber before being joined by black pepper on the palate that gets the cigar into medium-plus territory fairly quickly. The first retrohale isn’t quite as peppery at the onset, though it makes its presence felt shortly after the smoked has passed through the nose. Just shy of the burn line hitting the one inch mark, both sweetness and corn cereal come into the equation, not quite as sweet as Frosted Flakes but certainly in the same vein. The strength also seems to have backed down a tick or two, or at least feels softened by this latest flavor addition, though I can’t say the word mild has come to mind yet. The ash has held on throughout the entire first third, with a sharp and even burn line and plentiful amounts of smoke. Once I get nervous enough about the ash to knock it off, the second third sees black pepper return rather quickly and vigorously, while the woody core of the flavor keeps things on the lighter side. It’s a touch drying on the palate as the midway point approaches, and every so often the pepper oversteps a bit. A retrohale at the midpoint is a bit more conventional than it was earlier, with white pepper wasting no time giving a subtle and pleasing tingle to the nostrils, and the combination of the flavor and aroma are giving the cigar a new peak. While complexity hasn’t been part of the Luminosa’s first half, it’s starting to show some in this section while still delivering some clean, single strain sensations. The final puffs of this section bring on yet another change, taking the profile smokier and introducing some rocky terroir that pivots the flavor into a different yet equally enjoyable place. 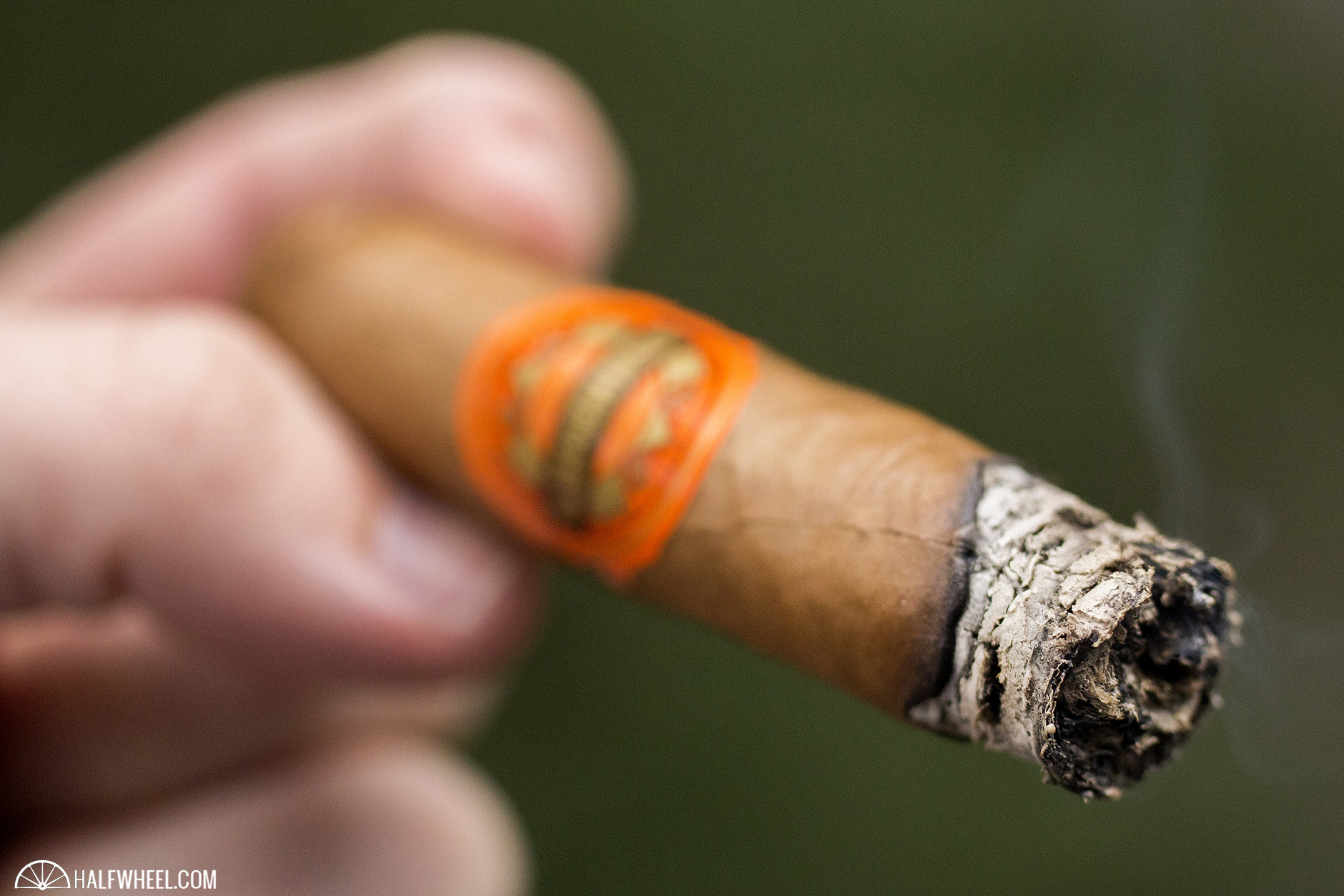 The burn rate has slowed down a bit heading into the start of the final third as the flavor continues to explore a more terroir-driven profile. It’s a bit rougher but far from harsh, and the strength doesn’t appear to have increased due to more nicotine, but each puff leaves a more lasting impression on the palate, as well as on my system as a whole. I’m still struggling to figure out exactly how this cigar is being billed as mild, as with just over an inch to go only a few puffs would merit that descriptor. Rather, the cigar has stayed squarely medium if not medium-plus in both flavor and strength throughout. There’s a bit more char in the final inches, and the black pepper is a bit more biting than it has been. The construction is quite good, and other than the flaky ash I haven’t had much of an issue with any of the three cigars smoked other than one touch-up. A bit of sweet cedar and campfire wafts through the air in the final inch and brings the Luminosa to a very enjoyable close. This is definitely a profile I’ve smoked before but haven’t smoked recently or nearly enough, and to say that the Luminosa Robusto was a pleasant surprise would be an understatement. My biggest note is that I’m puzzled as to how this is called a mild cigar, as the flavors are fairly rich and vibrant, with plenty of pepper to keep all but the most hardcore of pepper junkies satisfied. The complexity might be lacking a bit, but it’s not a noticeable flaw of this cigar and the fantastic construction only adds to the things to like about the Luminosa. There’s no doubt that I’m impressed and intrigued by the blend and look forward to smoking more in the near future.