Summertime means new lighters from The Lotus Group/Integral Logistics, the company behind the Lotus and Vertigo brands, and the company is rolling out a number of new options for premium cigar smokers.

The Lotus GT gets its styling from the automotive world and offers not only a dual flame lighter, but dual punch cutters that tuck into the sides of the lighter. The large flame adjuster is designed to evoke notions of a car tire, while the fuel level window is also a dual model, with windows on the front and back of the GT.

It is housed in a black matte metal body and offered in five colors: glossy black, silver, glossy red, blue, and green, each of which are priced at $49.95.

Lighters that come with cigar rests built into the lid have become a growing trend in the last year, and Lotus is getting in on the action with the Monarch, a quad-flame torch lighter that offers a built-in punch cutter, tinted fuel window, and a curved cap upon which to rest a cigar. The company claims that the lighter will work at elevations up to 12,000 feet.

Lotus’ new entry in the double flame segment is the single-action Chroma, which features an angled pair of torch jets as well as a fold-out punch cutter. It also offers a large flame adjuster, all metal housing, and functionality at elevations up to 12,000 feet. It is offered in four glossy finishes: red, blue, white, and black, all of which have a gunmetal base and are priced at $39.95.

Lotus has also added some new color options for lighters in its portfolio: The Lotus Defiant, a quad-flame torch lighter, is getting a brushed copper option, priced at $49.95.

The Lotus CEO, a triple flame torch lighter, gets a chrome satin option, priced at $39.95. The company’s Vertigo brand is also getting a number of new lighters this summer, headlined by the Crusher, a triple flame torch lighter that also includes a fold-out punch cutter, large flame adjuster and color-matched fuel window. The company says it will work at elevations up to 12,000 feet. It is offered in a black matte metal housing with four accent colors: red, blue, green, and orange. Each is priced at $29.99. 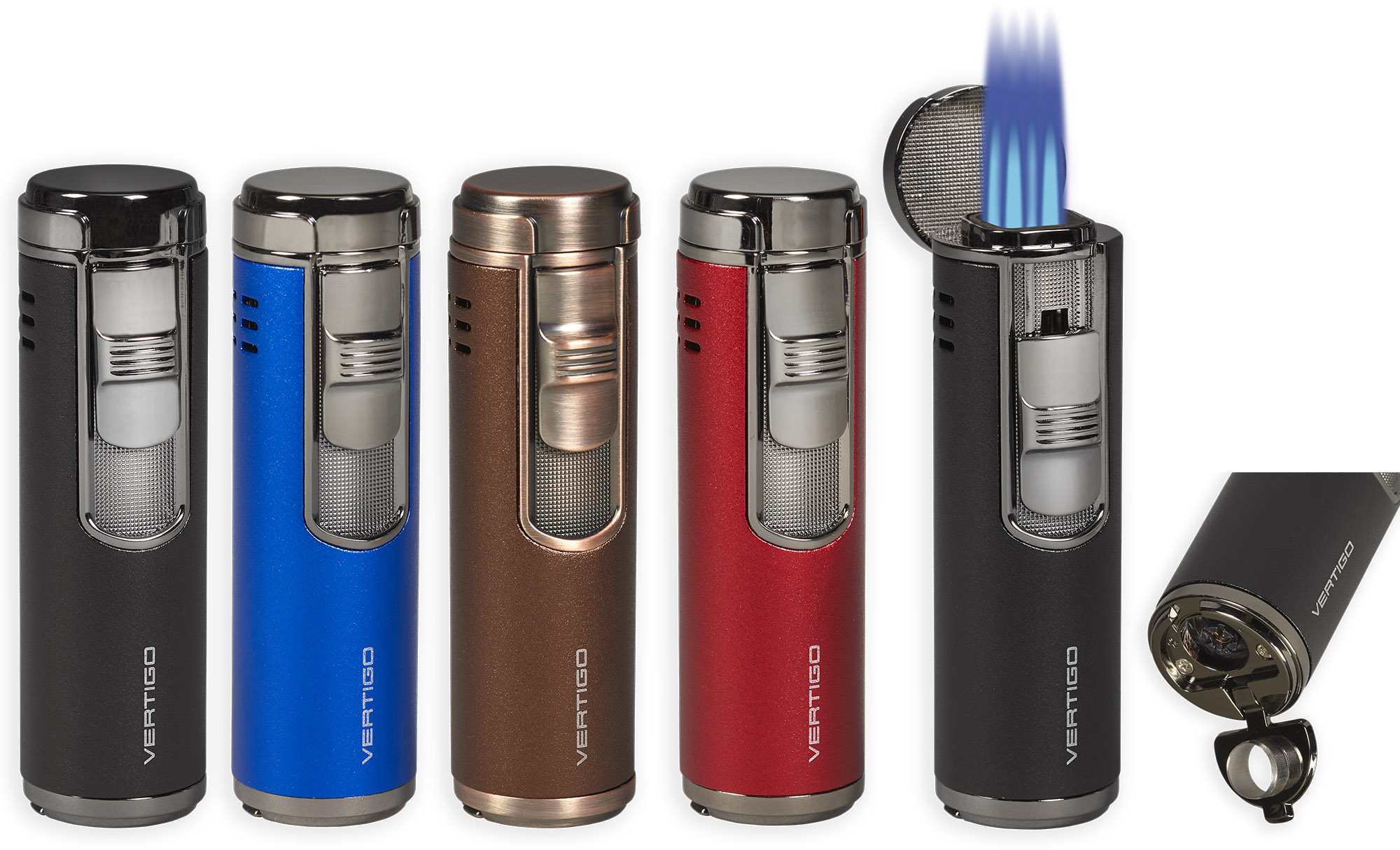 For a little more firepower, the Vertigo Eloquence is a quad-flame torch lighter that offers a single action ignition, fold out punch cutter, and a fuel window. The company says it will work at elevations up to 10,000 feet. The lighter offers a metal housing and is available in four colors: black and gunmetal; blue and gunmetal; red and gunmetal; and brown and brushed copper, each priced at $24.99. 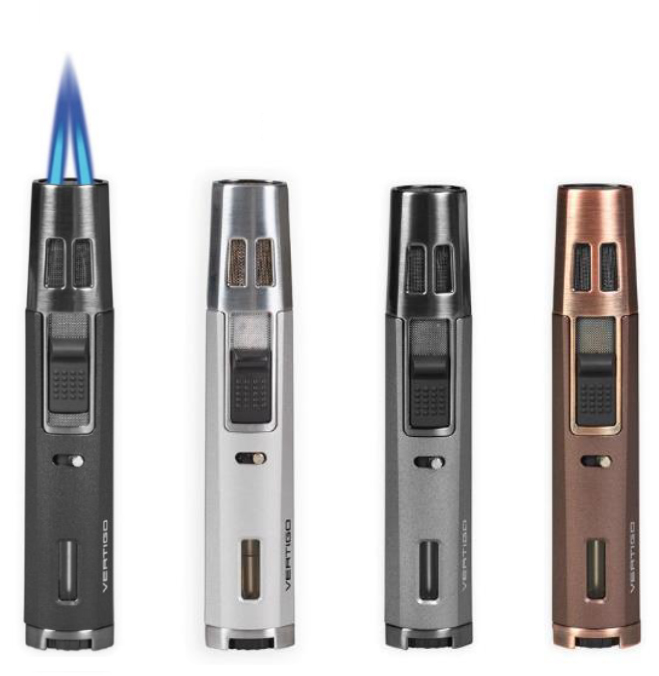 The Dagger is a dual-flame torch that comes in an elongated body measuring five inches long. The flames have been angled towards each other to give it additional accuracy. It features a single action ignition, fuel window and large flame adjuster, with ignition working at up to 9,000 feet.

It is offered in four colors: a black and gunmetal combination, chrome, gunmetal, and copper, each priced at $19.99. The Ultra is a pocket-friendly triple flame torch with single action ignition, retractable cigar punch and large flame adjuster. It features metal housing and works at elevations up to 12,000 feet. It comes in black crackle, chrome satin and gunmetal satin, each priced at $19.99. The Drone is a dual flame torch lighter with a fold out cigar punch and fuel window included in its all metal housing. The company says will work at elevations up to 12,000 feet. It is offered in black crackle, chrome satin, and gunmetal satin, each with an MSRP of $19.99. The Regal is a budget-friendly quad-flame pocket torch that offers a curved lid that functions as a cigar rest. It also has a built-in punch cutter and large flame adjustment wheel, with ignition guaranteed at up to 12,000 feet. It is available in black matte, chrome satin, antique pewter, and antique copper, each priced at $19.99. The Bombardier is a wallet-friendly and pocket-friendly triple torch, with a single action ignition and large flame adjuster. It is priced at $7.99 and comes in four color combinations: metallic black and black matte; metallic red and black; metallic chrome and black; and metallic gunmetal and black.

Rounding out the new pocket-friendly offerings for the Vertigo brand is the Attaché 2, a traditional soft flame lighter. It features a single action ignition, large flame adjuster, fuel window and metal housing, and it too will work at elevations up to 12,000 feet. It is offered in black matte, brushed copper, brushed chrome, and military green, each priced at $9.99. The Optimus is a table top triple torch lighter that offers a pivoting head and single action ignition, as well as a large flame adjuster, extra large fuel tank and metal housing. It comes in black matte or black and gunmetal, both with an MSRP of $24.99. Also in the table top category is the Cyborg, which packs an extra large single flame torch. It also has a single action ignition and extra large fuel tank, and will work at elevations up to 12,000 feet. Its housing is made from aluminum and is offered in three colors: black matte, chrome and black, and camo and gunmetal. It’s priced at $24.99. The Grasshopper offers a new take on a familiar design in single flame table top torch lighters, offering an extra large single flame. Its single action ignition can be locked into place for a continuous burn, and it offers a flame safety lock. It works at elevations up to 12,000 feet and is available only in a black matte finish, priced at $14.99.

A pair of Vertigo lighters are also getting new finishes. The Conquistador is adding chrome satin and gunmetal satin options, which join the black crackle option. It is priced at $24.99. The Tee Time Golf Lighter, a single flame torch lighter with a divot tool and ball marker as well as a curved cap on which to rest your cigar, is getting two new colors: brown and green, both with white accents and priced at $19.99.

All of the new lighters are in stock and ready to ship to retailers.