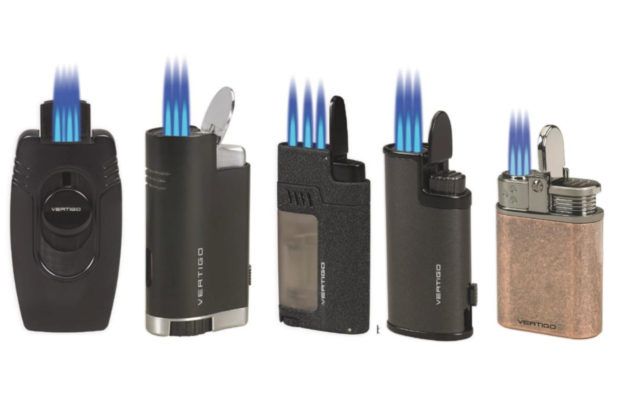 The Lotus Group/Integral Logistics will have plenty to show off at this year’s IPCPR Convention & Trade Show, as the company has announced five new triple flame lighters that will be released under the company’s Vertigo brand.

The Vertigo Thunder ($29.99) features all-metal housing and a single action ignition that lifts up the lid and will get the lighter going at elevations up to 12,000 feet. 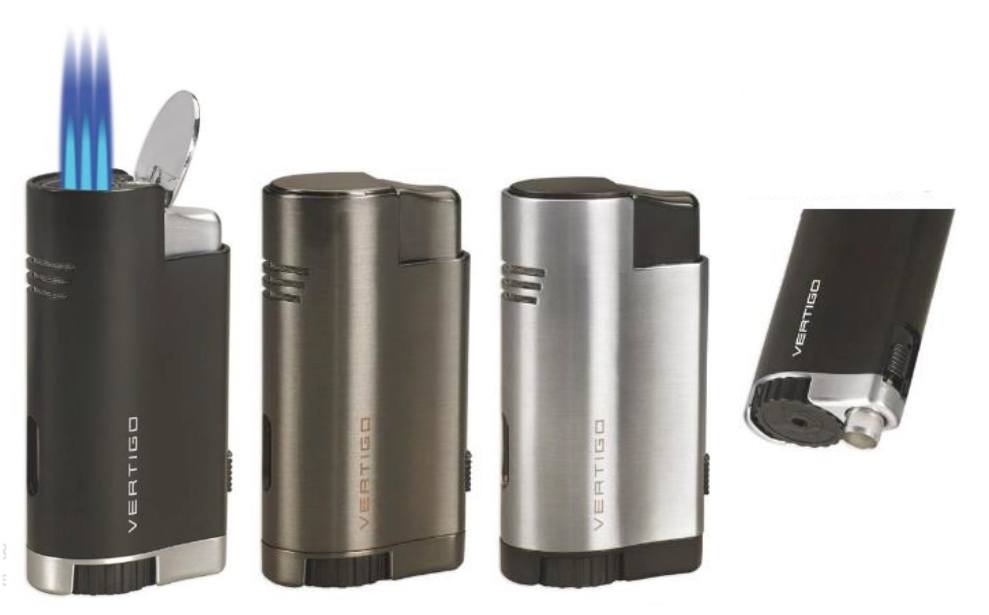 A retractable cigar punch is housed along the side of the lighter, while the base of the lighter has a large flame adjustment wheel. It’s available in satin gunmetal, black matte and brushed chrome, and chrome satin and black matte combinations. The Vertigo Gauntlet ($19.99) is a slim triple torch lighter that comes in Lotus’ new antique finishes: brass, pewter, or copper, as well as black crackle. A cigar punch folds out from the bottom, while a clear fuel tank makes it easy to see when it’s time for a refill. The company says it will light at elevations up to 12,000 feet. In a more cylindrical format is the Vertigo Titan ($19.99), which is promised to work at elevations up to 12,000 feet as well. It too comes with a fold out cigar punch and is available in black matte, red and black, brushed gunmetal, and brushed chrome and gunmetal. 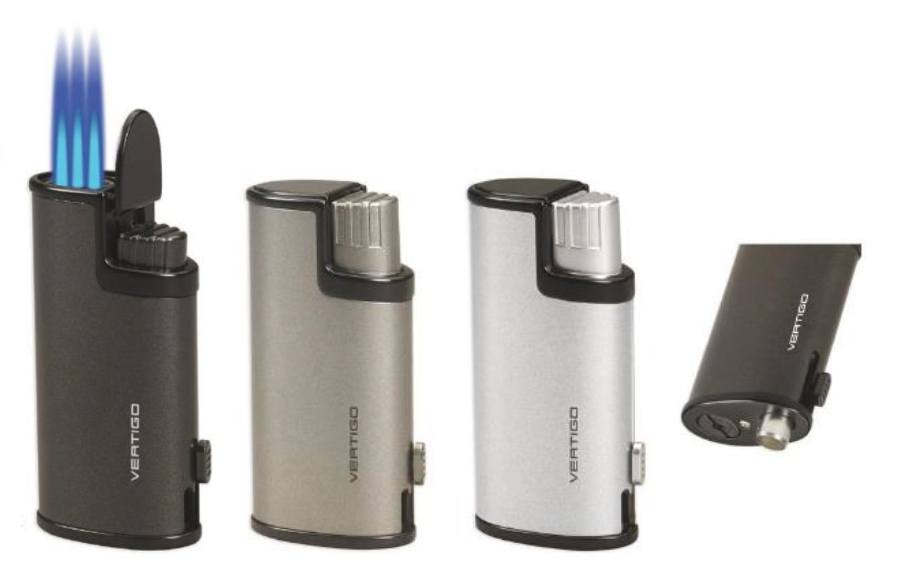 The Vertigo Warrior offers a single action ignition; just press down on on the lowered button to lift the lid, begin the flow of fuel and get the three torches burning, which are promised to ignite at elevations up to 11,000 feet. It offers a retractable punch cutter, fuel window and large adjustment window. It’s available in three colors: metallic black, metallic gun and black, and metallic silver and black, each priced at $14.99.

Finally, the Vertigo brand is also rolling out a number of antique finishes, which are highlighted in the Stealth Antique Table Lighter ($29.99). This new triple-torch offers wind resistant torch flames that are ignited by a single-action ignition that is said to work up to 11,000 feet in elevation. 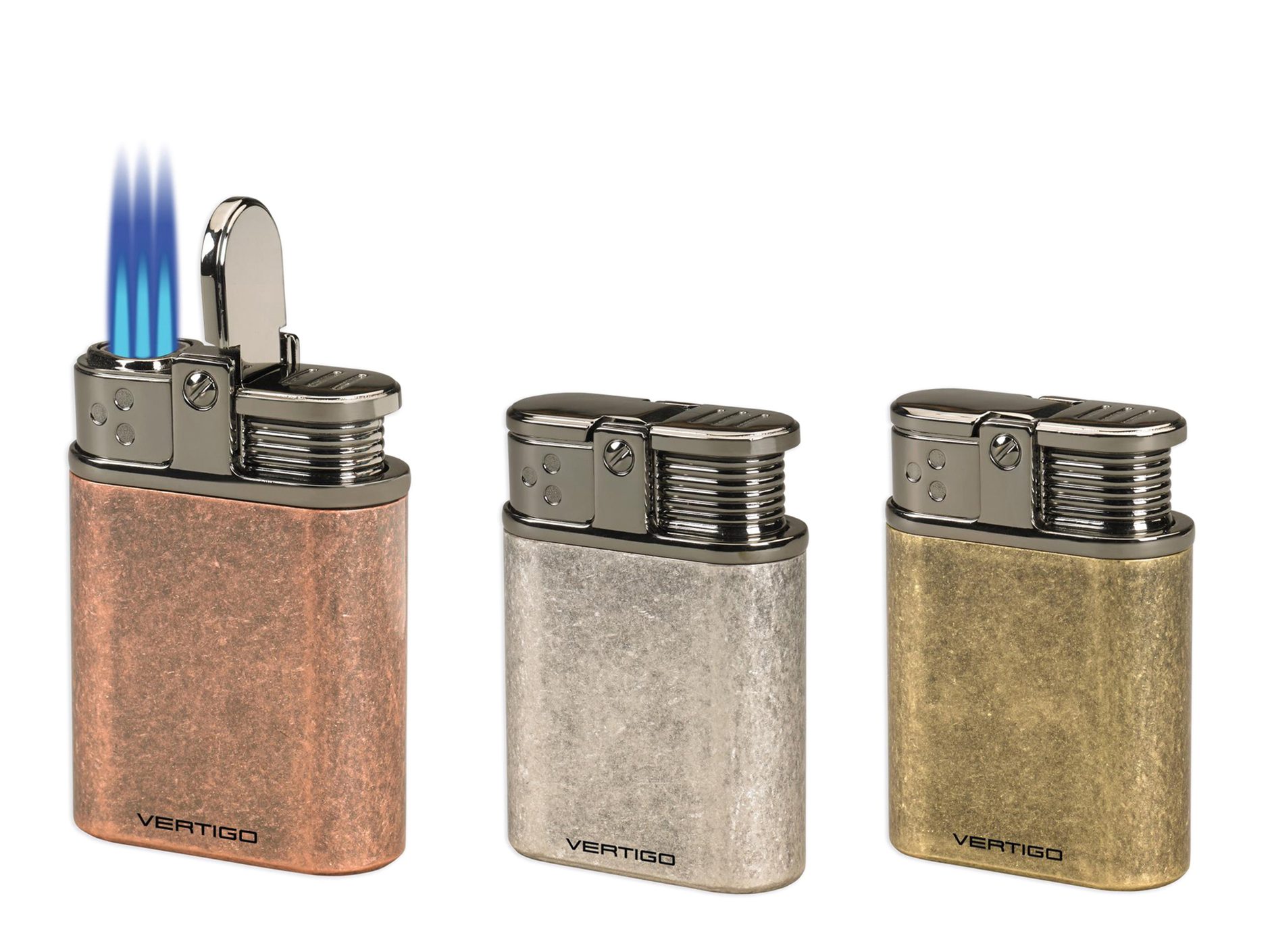 The lighter features an extra large fuel tank and large flame adjuster wheel on the bottom of the unit, with sturdy metal housing and a freestanding design.