Most of the time when two companies who have never worked together make a cigar, the fact that the two companies are working together is what stands out. But I remember when I heard about the new Los Tejanos by OSOK X Rojas, a new project from Edgar Hoill of EH Cigars and Noel Rojas of Rojas Cigars, it was the fact that the cigars are made in two different countries that caught my attention.

Two of the three sizes of Los Tejanos—the Mareva and Toro—are being made at Tabacalera Flor de San Luis in Nicaragua, while the Lancero is being made at the Rojas Cigars factory in Richardson, Texas.

The name is what Mexican immigrants who have settled and Texas have called themselves, though the name has expanded to include those from all Latin American countries settling in Texas. The tejano name references many other things, notably a specific style of music. 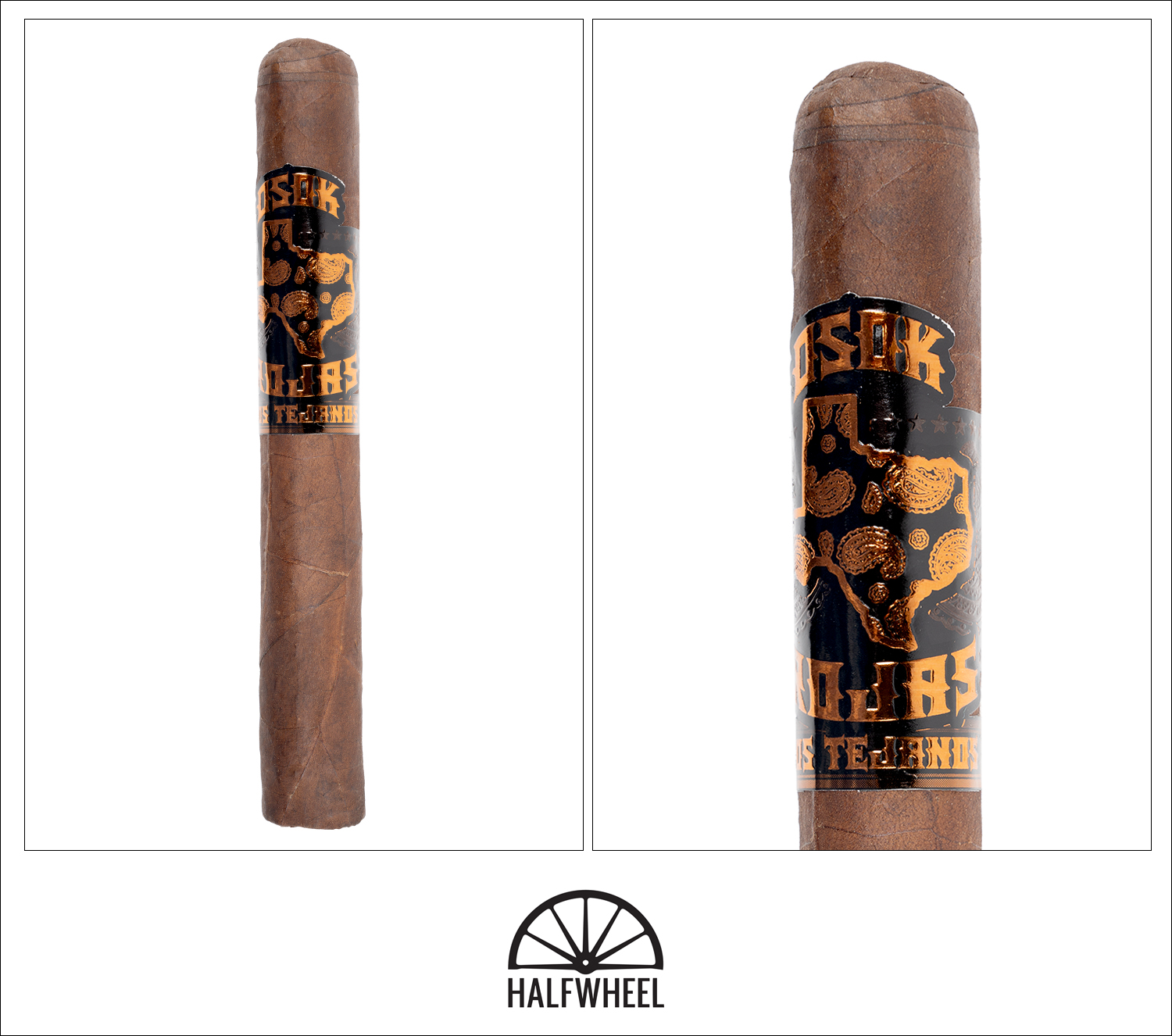 It’s almost October and there’s what could be a Halloween theme going on with the band. I don’t think that was the point here, but the copper is nearly orange and it works well with the black parts of the design. The wrapper is pretty dark—probably darker than the pictures show it to be—with some reds breaking through. Unfortunately, the construction of the cigars isn’t as great as the best-rolled cigars. For starters, the seams are a bit loose on one cigar, and on all three cigars, the feet are cut very unevenly. I don’t think that many cigars are 180 degrees flat on the feet, but these are noticeable. One sample is sloppy enough that I’m not sure if this cigar was supposed to have a covered foot. The aroma from the wrapper is medium with some roasted flavors, barnyard, a burnt chicken-like flavor and something that reminds me of cardboard. Smelling the foot reveals a full profile of sweet chocolate, red pepper and some weird fruity flavors, almost like a spoiled plum.

The Los Tejanos by OSOK X Rojas begins with a mixture of nuts and toast followed by a semi-sweet cocoa, black pepper and red pepper. It’s medium-full and capped off by a toasty finish. Despite the heavy dose of two different types of pepper at the beginning, there’s not much in the way of pepper flavors for most of the first third. Instead, the profile is led by a flavor that reminds me of a pile of tree leaves over earthiness and meatiness. There are some semi-sweet flavors on the finish over white pepper, nuttiness and some more of that leaf flavor. On one sample, the finish tastes like a lighter Scotch whisky with a toasty sensation that borders on tasting like peat. Retrohaling is basically just adding toasty flavors to the profile. While there’s a bit of the wet leaves flavor, my notes start with “toastiness, lots of toastiness.” The finish on the retrohale isn’t that much more entertaining, just toastiness and minerals. Flavor is medium-full, body is medium-plus and strength is medium-plus. Construction is great.

While there’s still quite a bit of the pile of leaves flavor in the second third, the biggest change for the Los Tejanos is that the main profile is much drier. I enjoy it more than the first third and, at times, it adds a bit of a Ruffles potato chip flavor. The finish has wet leaves, a bit of a Fernet flavor and some white bread. Retrohaling adds dryness to the profile thanks to a big mineral flavor. There’s an underlying sweetness that reminds me of a spiced rum and some more of that wet leaves flavor. Flavor is medium-full, body is medium-full and strength is medium-plus. While I avoid making any touch-ups in the second third of the Los Tejanos, the smoke production is at best inconsistent. I wish there was more smoke coming into my mouth, but my largest issue is that it’s just inconsistent. The final third of the Los Tejanos by OSOK X Rojas sees toastiness take over from the wet leaves flavor. The latter is still there, but it’s a secondary note along with some nuttiness. The finish has some grains—which combined with everything also that is going on—reminds me of a bourbon, but there’s also an underlying rubbery flavor that takes away from that feeling. I really don’t pick up much when the smoke is just leaving my nostrils, but the finish of the retrohale has a bread base that turns into a burnt toast flavor over time. Altogether the cigar is both different and toastier than before. Flavor remains medium-full, body is stronger but still medium-full and strength is medium-plus. Smoke production gets better, though I still wish it was a bit better. In the end, I manage to make it to the end of all three samples without having to touch up any of the cigars. This is an example of a cigar whose score is going to be higher than my own personal feelings about the cigar. From a technical standpoint, construction was good enough to avoid any deductions, though could have been a notch better. Flavor is a bit more complicated. At no point was the flavor off-putting, but altogether it wasn’t my favorite profile. While there were changes, the wet leaves flavor was a bit too much for me, both in terms of its intensity in the first two thirds and also the amount of time it was present. A bit of sweetness here and there would dramatically change my opinions of this cigar, but as it stands, it’s just too dry and linear for me.