For the maduro version of his Long Live the King line Robert Caldwell of Caldwell Cigar Co. turned to a Mexican San Andrés wrapper, placing it on top an Indonesian binder and a filler made up of corojo 98, habano and Pennsylvania double ligero.

The new line, which was announced in June, marked the second time this year that he was using a Mexican-grown wrapper, the other being the Eastern Standard Habano, which uses a hybrid habano wrapper grown in Mexico. 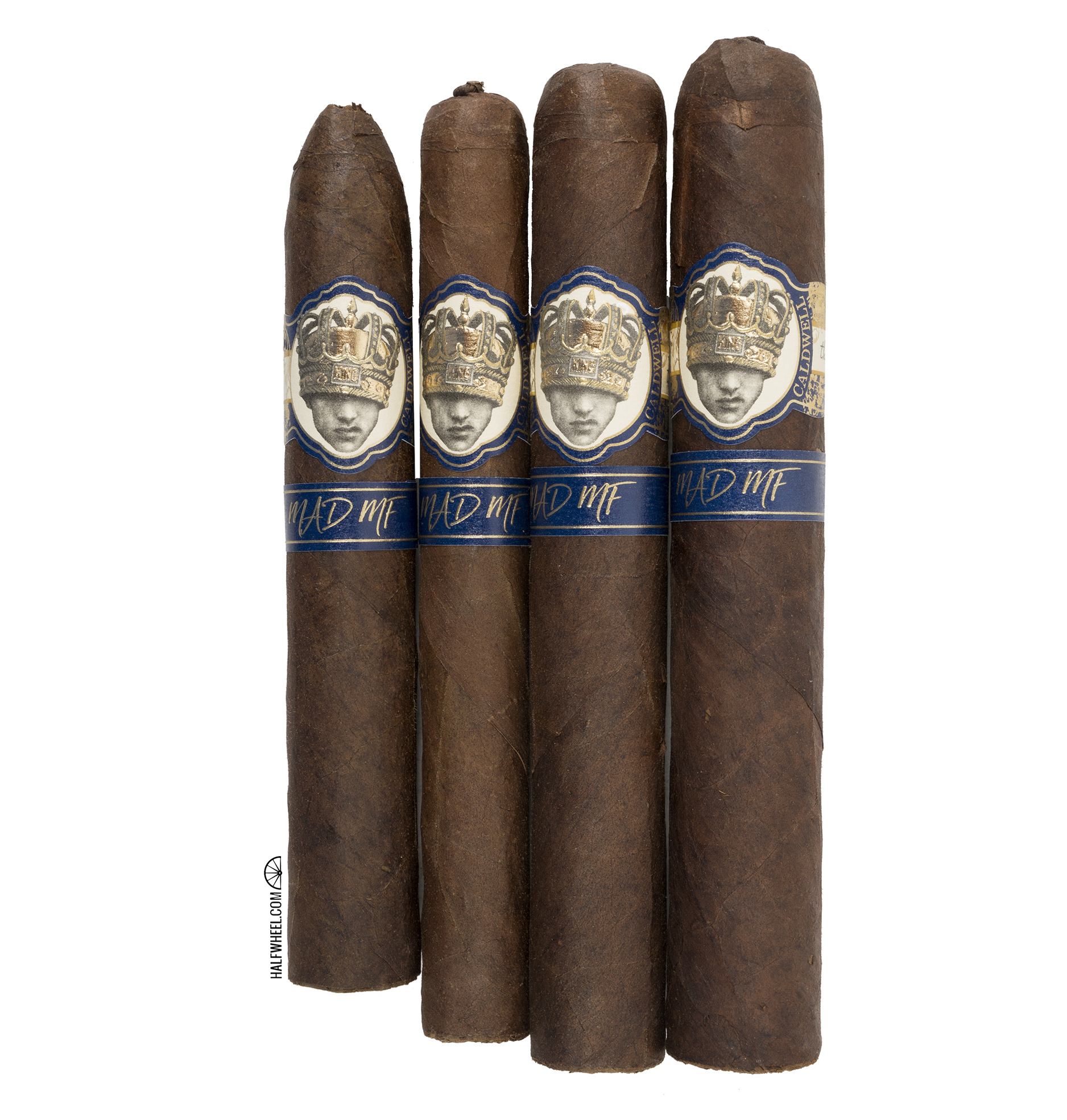 This new blend, which is stylized as LLTK MAD MF, is offered in four sizes.

All of the sizes come in 10-count boxes, which production handled by Tabacalera William Ventura. It is a limited release with just about 75,000 cigars being produced. 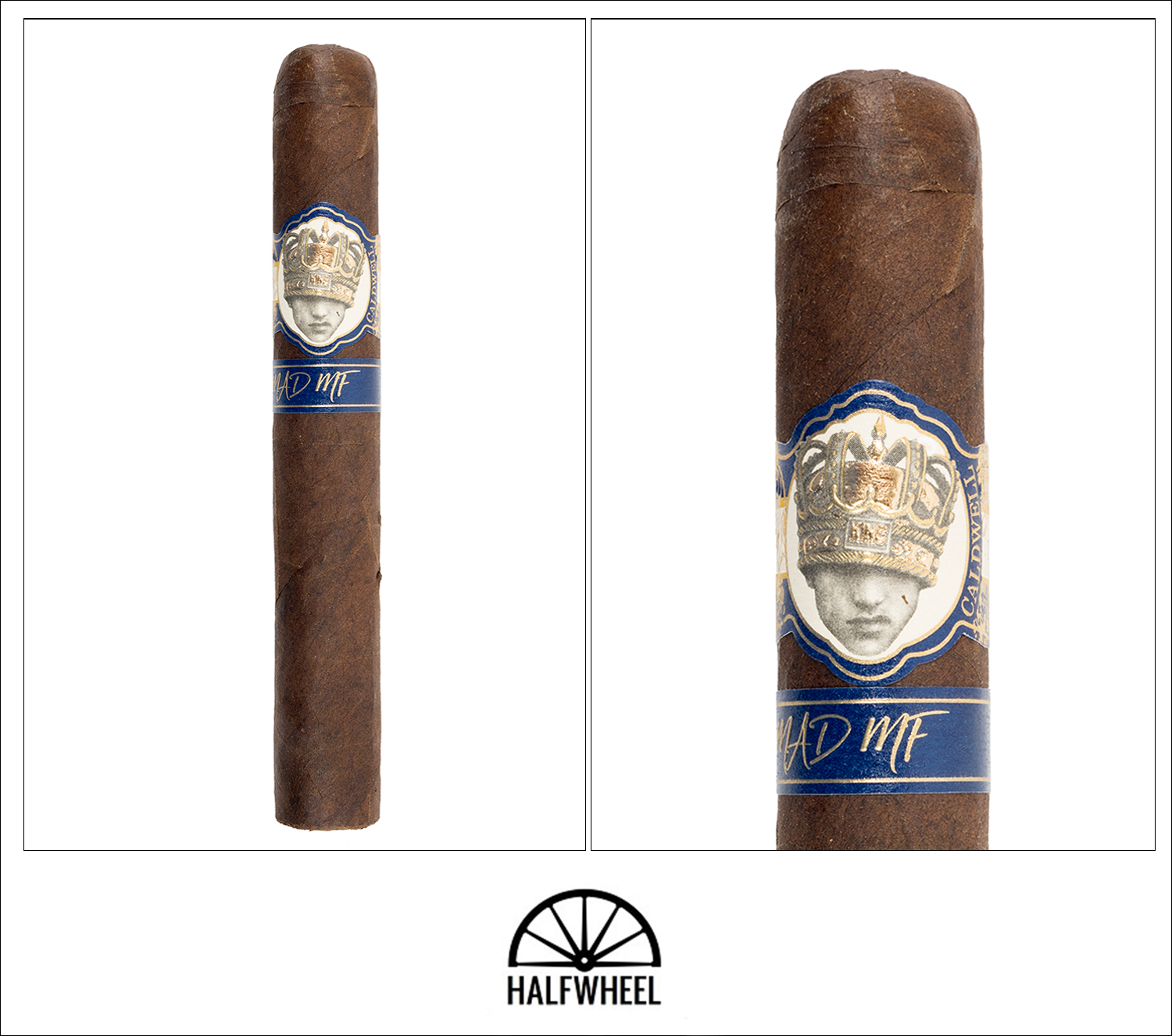 The Long Live the King MAD MF Super Toro doesn’t feel as beefy in the cellophane as it does once I take it out, instead appearing a bit thinner than the 54 ring gauge would suggest. The wrapper has a slightly oily gloss with a good bit of tooth which creates some fine grit texture for the fingers, while setting a solid backdrop for the updated royal blue and gold bands. While the cigar itself is fairly standard from a visual perspective and firm to almost rock hard from a rolling perspective, the cap is an interesting gathering and twisting of tobacco in place of a more traditional cap, which leaves me to ponder whether it is either a genius and innovative approach or a lazy way to bring closure to the head of a cigar. The wrapper doesn’t offer a lot of aroma except for an attempt at a peanut butter and chocolate combination, but the foot is bright and fragrant, with a bit of what I’d call perfume that gets quickly pushed into graham cracker, sweet peppercorns and table pepper. The cold draw is good if a touch tight, and much mellower in what it offers: a bit of subtle chocolate that starts like a Hershey’s bar before getting a bit more mocha-like and finishing with boiled peanuts. 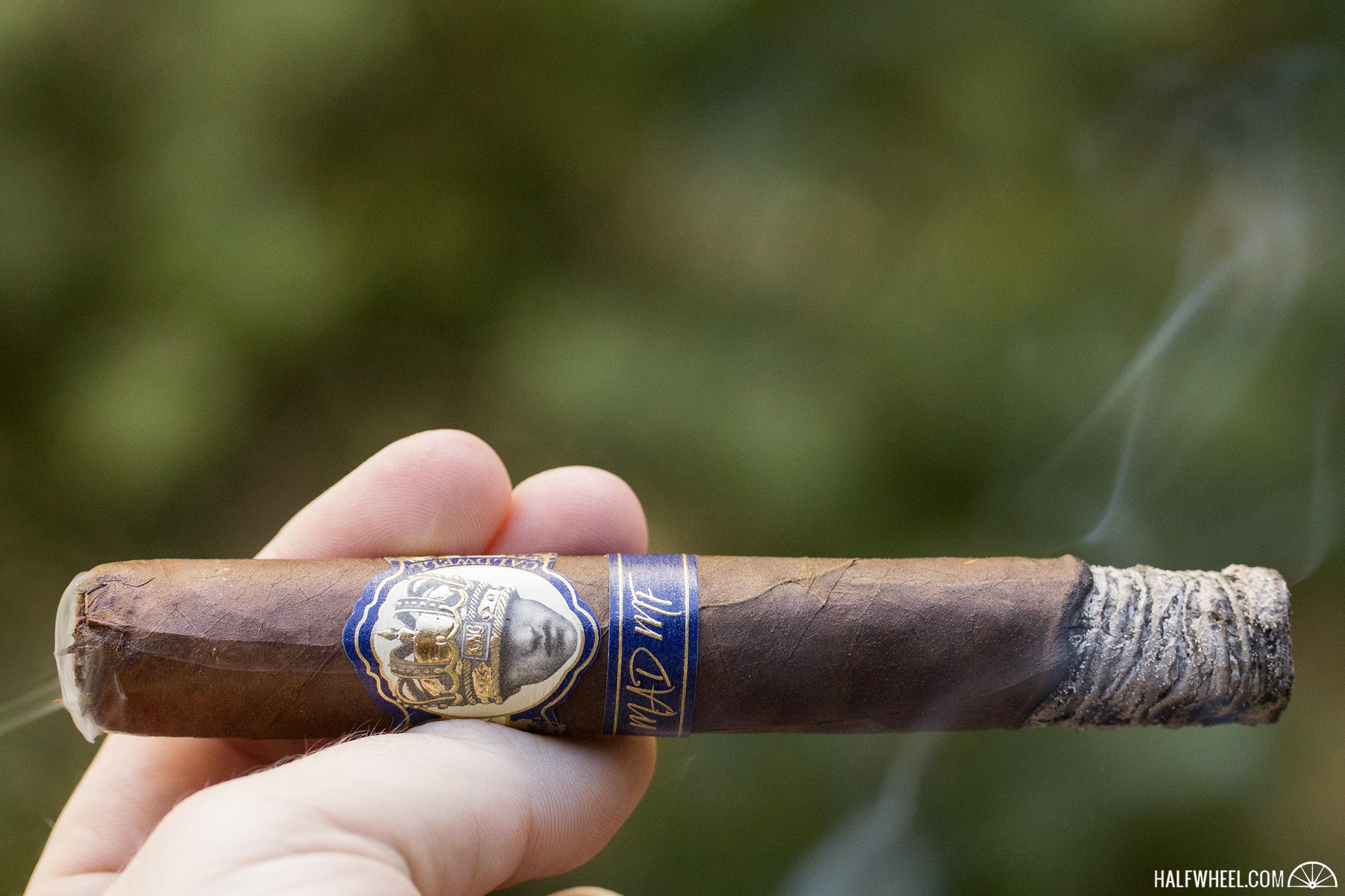 The first puffs of the Long Live the King MAD MF Super Toro are more or less what I would expect from a maduro that I know nothing about—I didn’t check the blend before starting the review—fairly full flavored with some sweetness and earth but without any overly defined notes. There’s also some building pepper starting to emerge, giving the profile a bit of character—I’m hesitant to say bite or roughness, though the thought does cross my mind more in the first sample than the other two. What is quite pleasing is the resting aroma, which has some thick, sweet earth to it, and lacks the pepper I get from retrohales, though that’s not a knock on exhaling some smoke through the nose. What becomes apparent is that it’s the contemplation of the combination of retrohale and smoke on the palette that really helps the cigar excel, something all too easy to overlook if smoking while distracted. The ash builds up quite well to the point where I finally have to tap it off, first out of my fear for it landing in my lap, secondly to set up a better photo. 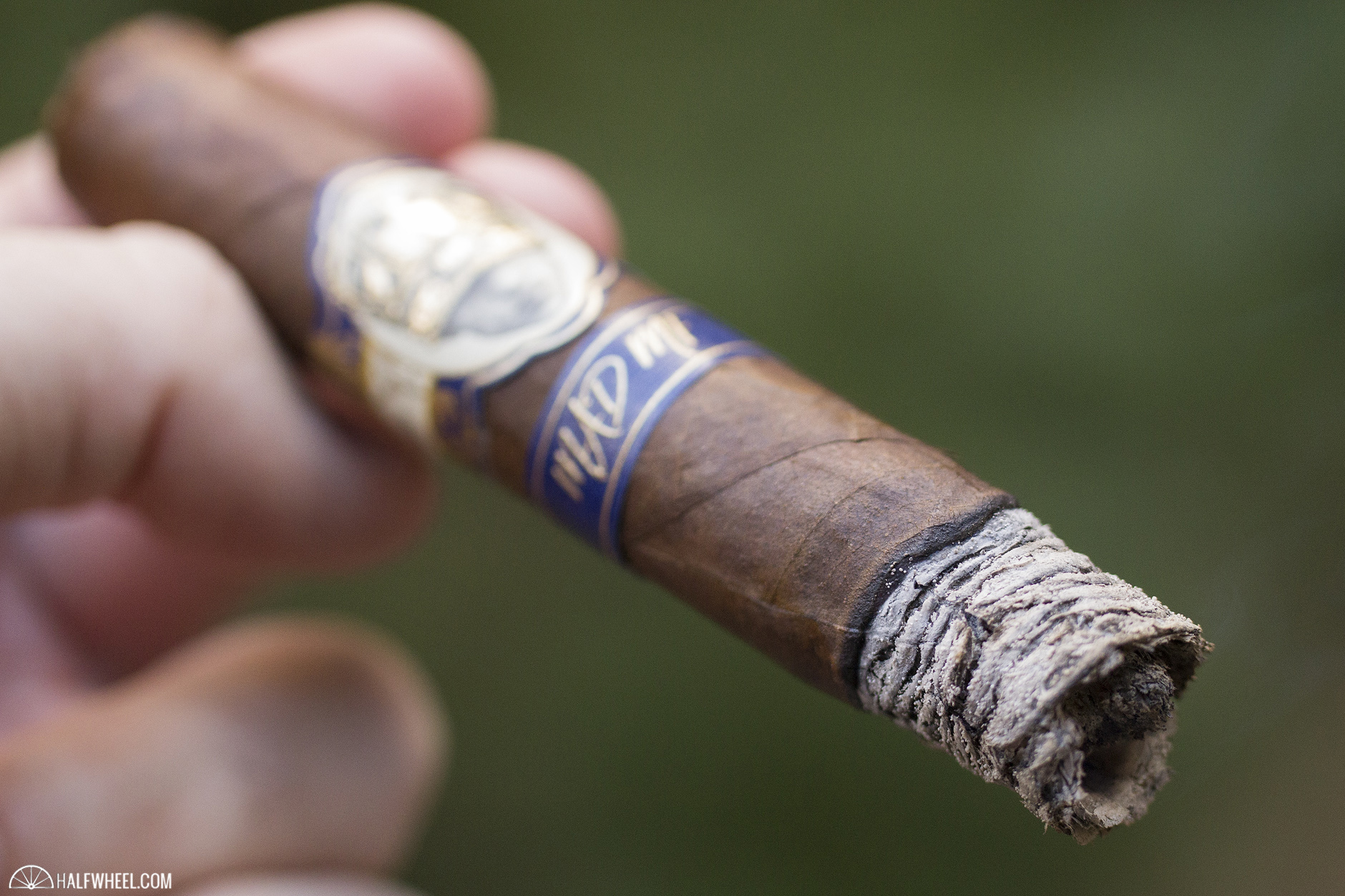 There is something special about a cigar that offers a pleasing retrohale, and the second third of the Long Live the King MAD MF Super Toro continues to do just that, so I find myself retrohaling fairly frequently to enjoy its lightly peppered, tingling sensation while it’s around. Meanwhile, the profile gets a bit sweeter on the tongue after dabbling with some dry earth and the pepper coming and going from puff to puff. Around the midpoint, the cigar reaches its fullest and most developed profile, though the flavors can have some trouble establishing themselves as particularly distinct. There’s some pepper, some dark berry sweetness and a bit of pepper with a bit of chalk developing again in the nose, but it is their seeming solidarity that makes them shine. It’s with remarkable consistency that almost as soon as I write that and the burn line enters the cigar’s second half, the profile changes and the three flavors start developing on their own without losing their cohesiveness. The sweetness begins to fade approaching the final third, with the profile drying out and picking up dry lumber, which in turn dries the mouth for the first time. The draw and smoke production remain good, with only one sample hitting a bit of a rough patch and needing a touch-up. 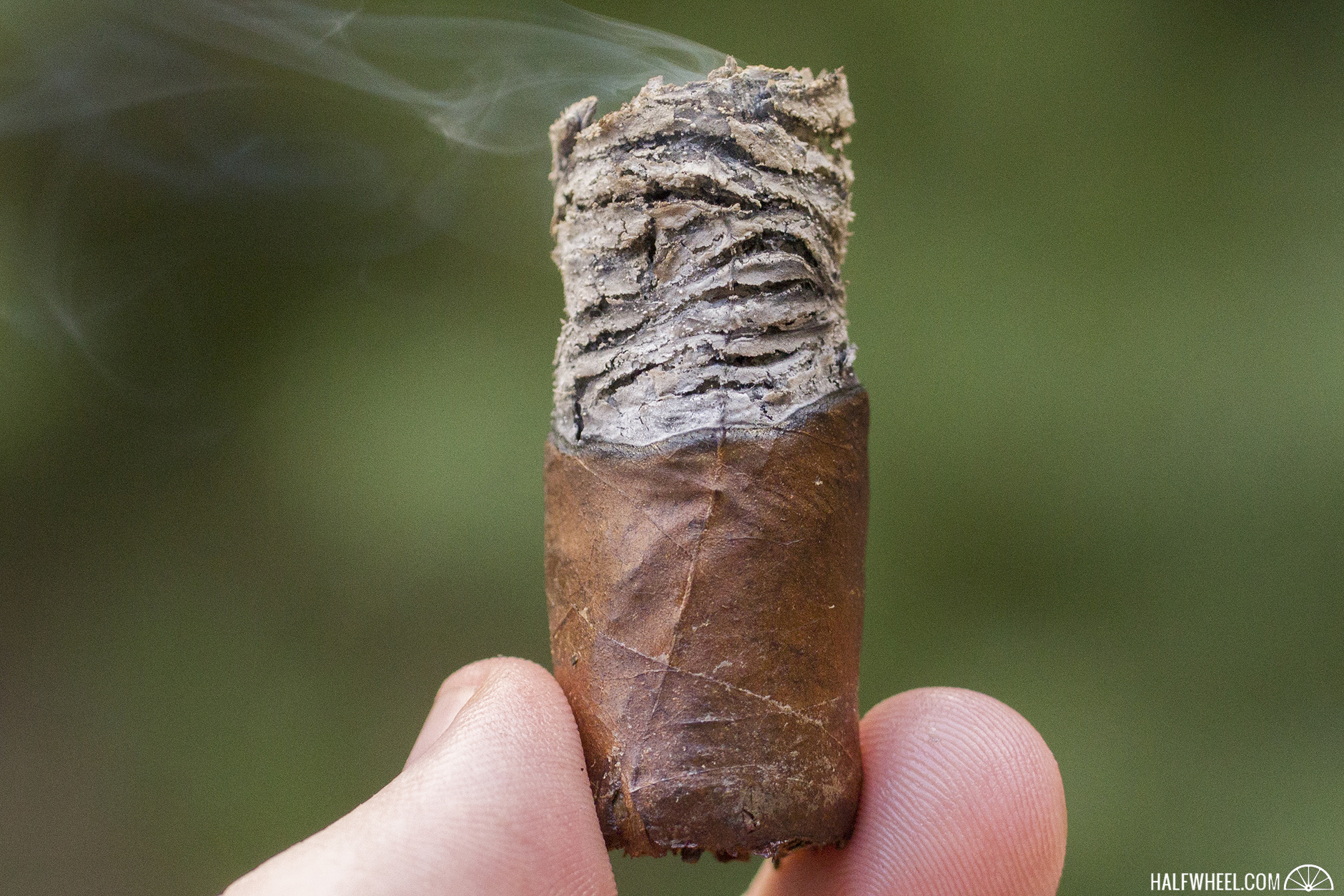 The profile of the Long Live the King MAD MF Super Toro stays in its new, drier spot as it enters the final third, and quickly picks up a bit of a dry tobacco flavor to double down on the change. While the physical reaction is similar to that of pepper, that component has diminished as well, and while the profile is enjoyable, it is less complex and rich than the high point it found in the second third. It appears that the berry sweetness won’t be making a return, as while the dryness mellows, it’s not replaced by much until in the final inches when some sharper pepper and a bit of heat enter. The technical aspects all remain well above average, and the cigar wraps itself when it’s tough to puff without making my fingers hot from the encroaching burn line.

The first two samples of the Long Live the King MAD MF didn't have me quite as enamored as the third sample, something I'm not sure was due to the cigars themselves or that I wasn't as plugged into the needed awareness of combining the sensations offered via the nose and tongue. For some reason, the two clicked best in the third sample, with that sample scoring the highest of the three and have me thinking this blend—at its best—might command placement on some end of the year lists. I'd love a bit more consistency of flavors between the second and final thirds, as each sample experienced some drop-off, but the lasting impression remained favorable: this is a well-balanced cigar that performs well and at its best, offers substantial depth and complexity, and as such, substantial enjoyment.