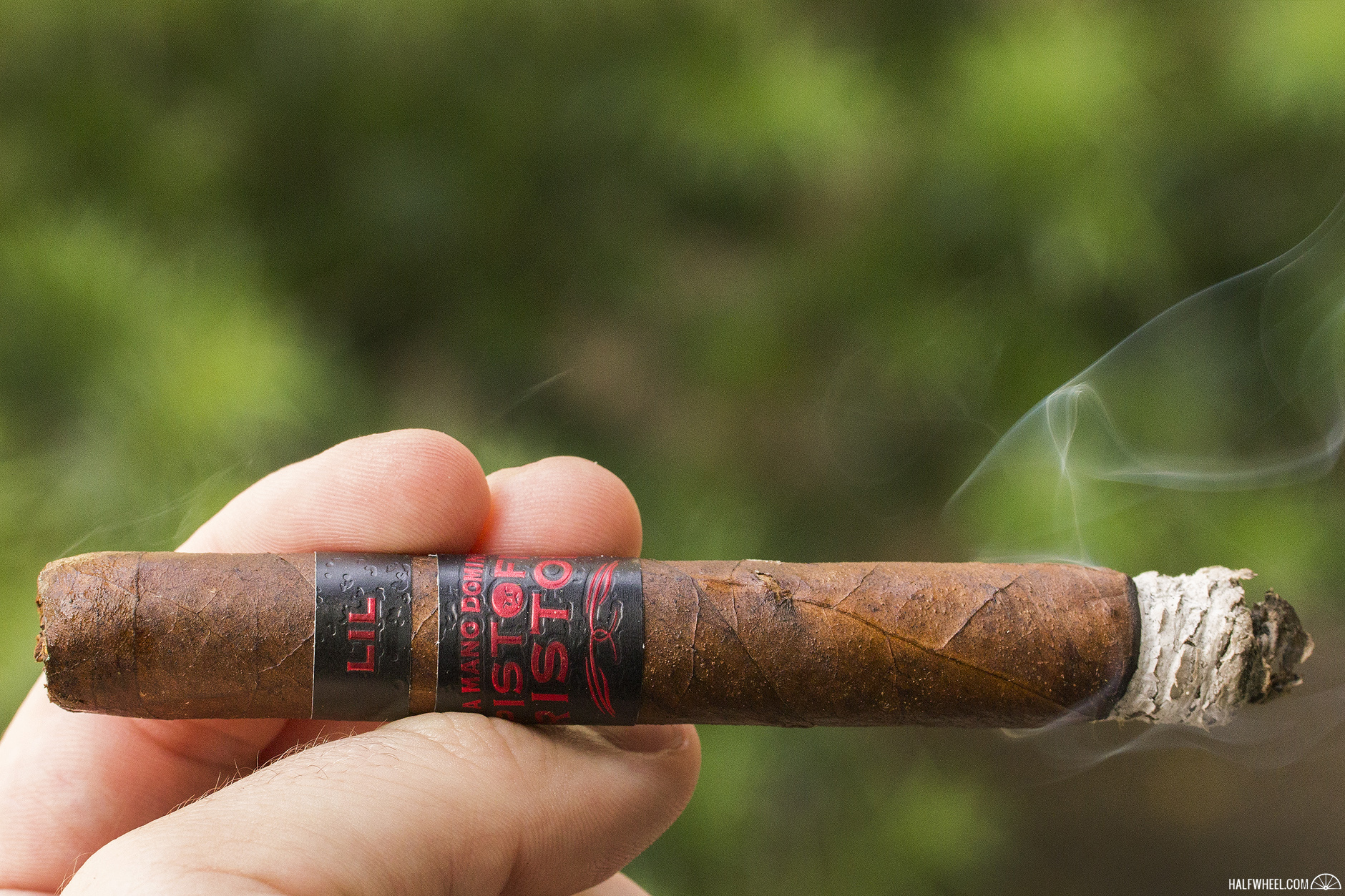 I can’t remember who said it to me recently, but it was something to the effect of you have to be careful about names that rhyme.

Whether or not that’s true, in the case of the Lil Pistoff Kristoff, it seems it may be like the reported strength of the cigar should be the most concerning.

Originally launched in the summer of 2016, the Pistoff Kristoff line was said to be the fullest in the company’s portfolio, yet owner Glen Case repeated several times that it also packed a good amount of flavor and smoothness. As for the name, that came from a customer who pitched the idea of the Pissed Off Kristoff. Case liked the sound but not the spelling, simply adjusted it and the cigar was born.

It uses a natural Mexican San Andrés wrapper, Indonesian binder and Nicaraguan fillers. It was originally released in four fairly traditional sizes before the company went big in January 2019 with the Extremely Pistoff Kristoff, an 8 1/22 x 60 gordo extra. In the spring of 2019, the company went the other direction, releasing the 5 x 44 Lil Pistoff Kristoff and bringing the line to six sizes, all of which come from the Charles Fairmorn Factory in the Dominican Republic:

The corona size has become a staple in the company’s portfolio in the past year or so, having been added in March 2018 to the Habano, Connecticut and Original Maduro lines. Jarrid Trudeau, vp of sales for Kristoff, told halfwheel that the idea to do the Pistoff Kristoff blend in a corona vitola, as well as the name, came from one of the company’s sales reps, “and we loved it.” 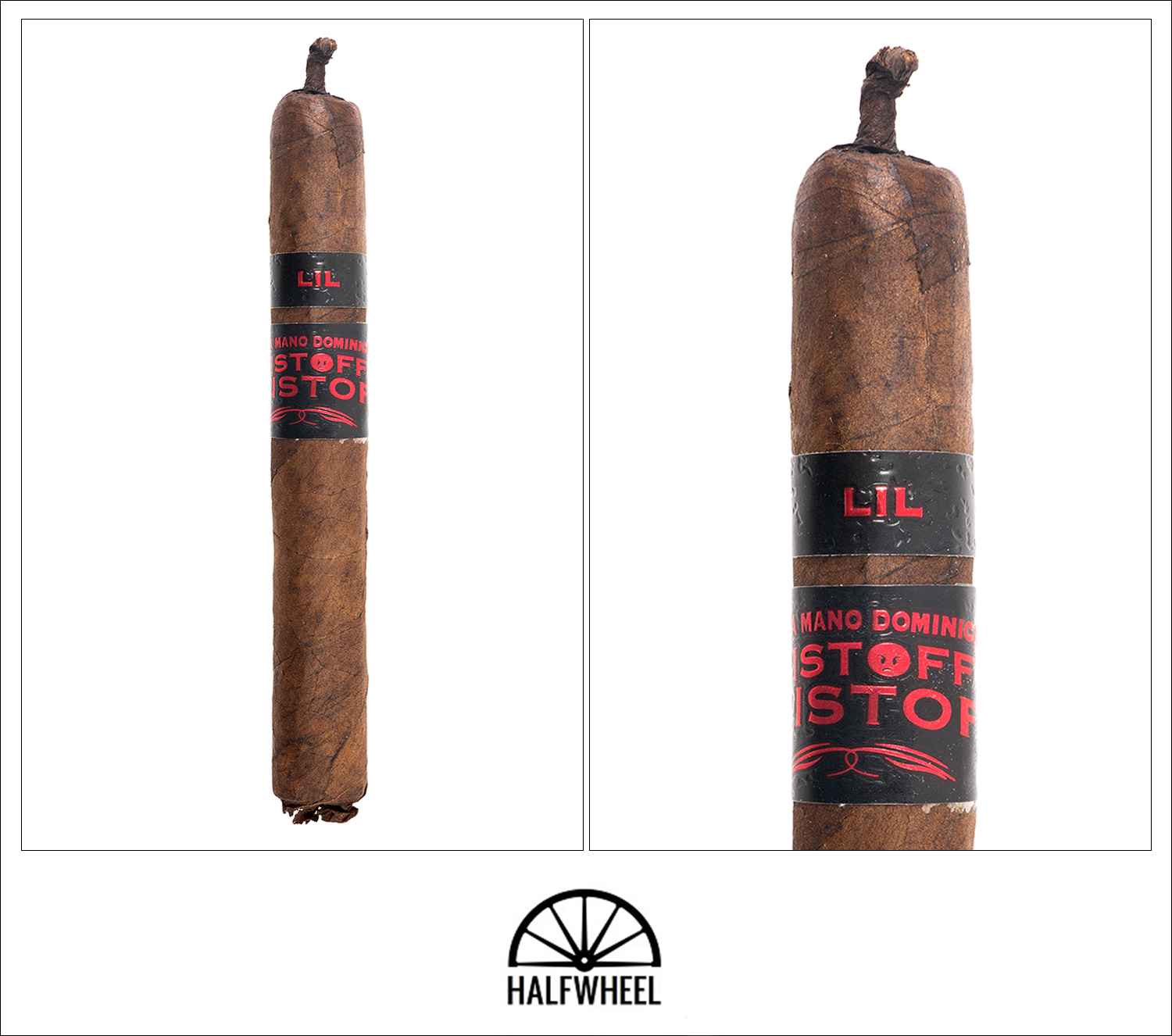 I didn’t pay much attention to the Lil Pistoff Kristoff before taking it out the cellophane, but once I do, there’s a ton that grabs my eye. First it the loose tobacco that comes out along with it and into my lap, small pieces that have broken off from the gathered, shaggy foot or the exposed head that I can’t figure out if it’s supposed to be a twisted tail of tobacco or something more fanned out, as there is variance between the samples in the regard. Second is the secondary band that say it all: LIL. If I didn’t know better, I’d think this might be the abbreviation of a store, or region, or someone’s initials, but it pretty much just adds the word Lil to Pistoff Kristoff, which is found on the other band. Ignore the Hecho a Mano Dominicana line between the two, and it certainly works. The cigar is firmly rolled, thicker and bigger than a cheroot, reminding me almost of a big Tootsie Roll, but with an oily, somewhat mottled wrapper leaf. There aren’t a ton of veins and what are there aren’t terribly big, but the combination of color and oils seems to make it look a bit veinier than I think it actually might be. The foot offers a bit of earth and wood, neither particularly strong but just fragrant enough to be noticeable, and neither accompanied by pepper. There is some sporadic sweetness from both of those flavors, a welcomed addition when it’s there. The cold draw is just a touch tight and sweeter than I would have imagined, somehow flirting with the flavor of a Tootsie Roll, while also hinting at warm root beer or Dr. Pepper, though going very light on any herbs as well as any pepper.

Given that I know the positioning of the Pistoff Kristoff blend and brand, I’m somewhat expecting to be greeted by a full powered, knock me back in my seat level of strength, but the Lil Pistoff Kristoff shows some restraint. It’s by no means mild, leading with a bit of thick soda sweetness, bark, hints of earth and just the earliest suggestions of black pepper, maybe with a single red chili flake mixed in as well. A surprisingly white ash emerges as the first half an inch burns, and while the burn line could use a quick touch-up after being lit via the rather wild foot, I’m inclined to let it straighten things out on its own. There’s a certain dampness to the wood flavors that reminds me of oak or maple, with the occasional touch of leather thrown in as well. The tail end of the first third sees pepper ramp up, particularly through the nose, and the cigar begins to live up to its billion as far as strength. The burn line has evened itself out, while the draw and smoke production are both good.

As I often do with other cigars, I find myself gravitating to the retrohales of the Lil Pistoff Kristoff, as that’s where the bulk of the pepper lies, as least where it is most distinctive. It’s on the palate as well, but the flavor profile is thick enough to mask it just a bit. It’s not long into the second third that I can feel the nicotine strength starting to kick in, though I wouldn’t say I’m getting a buzz. It seems that there is a decent amount trying to happen with the flavors yet it comes across as more of a stew where they are all tightly packed, at least until the flavor picks up a bit of dry wood at the start of the second half. While strength builds early in the second third, it plateaus ahead of the midway point, though I have a feeling it’s not going to need more now to deliver a substantial kick before the cigar is over. The more of the Lil Pistoff Kristoff that I smoke, the more I found myself really engaging with its unique profile, one that I can’t say I’ve found in many other cigars. There’s more spice beginning to come out of the profile at the start of the final third, never getting outright spicy, but adding a pleasant brightness and complexity that I would equate to a mildly sauced Americanized Chinese food dish. It hangs around for a bit before yielding to some dry earth and its associated pepper. With just over an inch to go, the cigar picks up a bit more pointed pepper, slightly grating on the back of the throat while some increased heat adds to the effect, and the tip of the tongue gets a new and distinct sensation. The draw and burn remain quite good until the very end of the cigar. 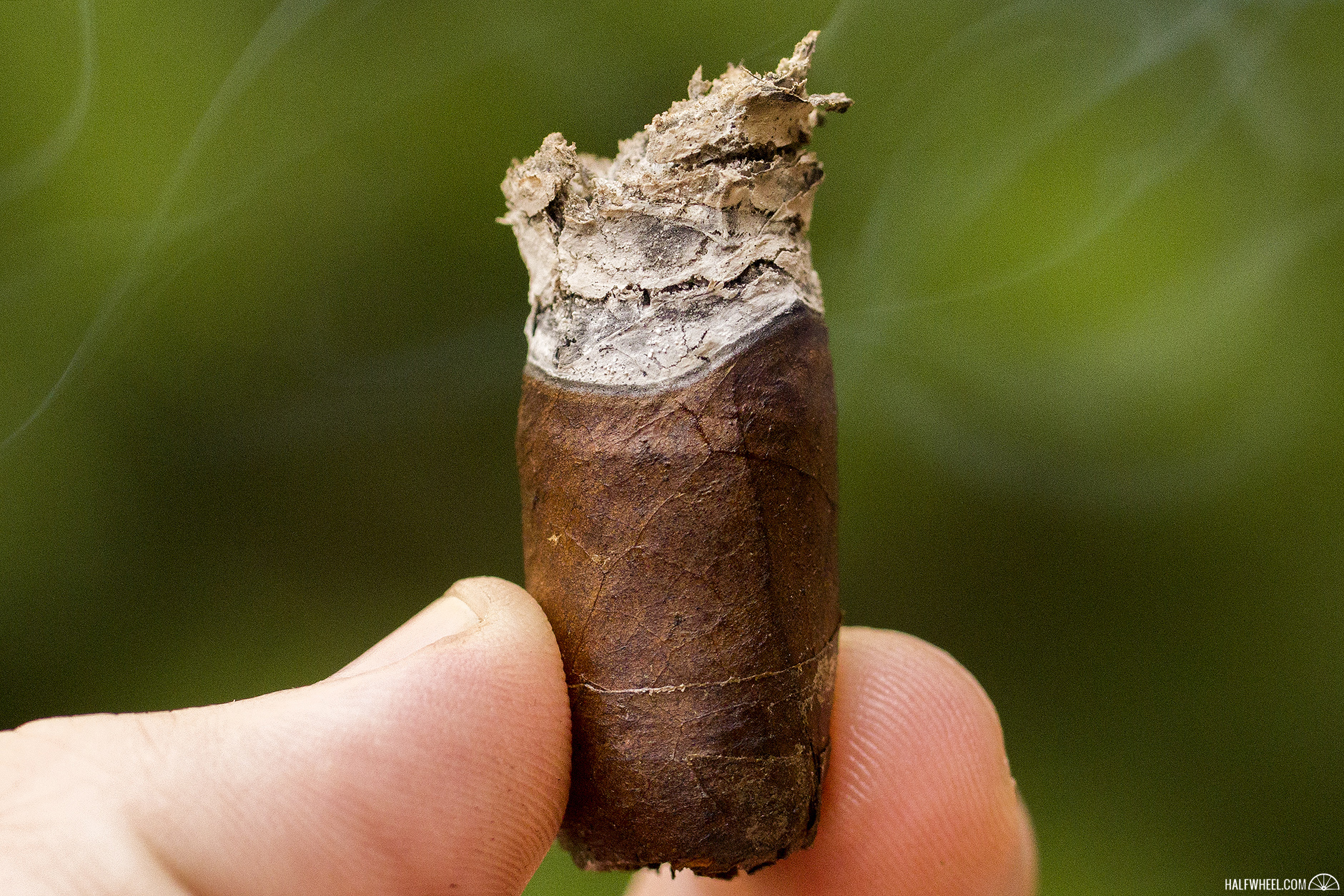 As I mentioned in my opening, I was more concerned about the billing of strength from the Lil Pistoff Kristoff; as someone who has come to sneer at the idea of strength for the sake of strength, I've generally stayed away from such cigars. However, the Lil Pistoff Kristoff does a remarkably good job at not being a one-trick cigar. Case largely delivered on his promise of the cigar having flavor and smoothness, at least about as much is possible when going for a strong cigar. The flavors complement the strength, leaning largely on robust earth, pepper and woods, but they stay fairly consistent throughout the cigar. As for the smoothness, I'm happy to report that it's there more than it isn't, though if you prefer a bit more gruffness and peppery tingle from your cigar, you likely won't be disappointed. While I wouldn't smoke this first thing in the morning, I could easily see wrapping up a week with this and a pour of my favorite whisk(e)y, Scotch or bourbon to put a strong and definitive finish to things.