While we use redux reviews to revisit cigars and see how they have aged over some time in the humidor, I think we’d be remiss to admit that they are also to give our reviewers a bit lighter to-do on their workload. Yet with the history of this cigar, I feel like that might not quite be the case.

The reason is that the Liga Privada Único Serie Year of the Rat has a good bit of backstory to it, which we account for, redux or not.

The cigar’s roots trace back to 2016, when Drew Estate announced that it was going to be sponsoring a cigar lounge at the BB&T Center in Sunrise, Fla., the home of the NHL’s Florida Panthers. With that sponsorship came a new cigar, the Liga Privada Único Serie Year of the Rat, that was only available at the arena’s lounge.

While we’ve seen a number of cigars come out that get their inspiration from the Chinese Zodiac, this cigar got its name from Panthers’ history, specifically, the team’s 1995-96 season that started off with a player by the name of Scott Mellanby killing a rat in the locker room with his stick prior to the team’s home opener, then going on two score two goals with that stick, leading goaltender John Vanbiesbrouck to coin the term “rat trick,” a play on the familiar term hat trick that describes a player scoring three goals in the same game.

The story got out and fans quickly took to the rat trick name, throwing plastic toy rats onto the ice to celebrate goals, a trend that continued into the playoffs when fans threw thousands of the items onto the ice and led to the NHL making a rule change that allowed referees to penalize the home team if their fans did something to create an undue delay in game action by throwing objects onto the ice.

The Panthers ended up going onto play in the Stanley Cup that year, the franchise’s only appearance in the Finals, and the announcement of Drew Estate’s lounge came during the 10th anniversary of that season. 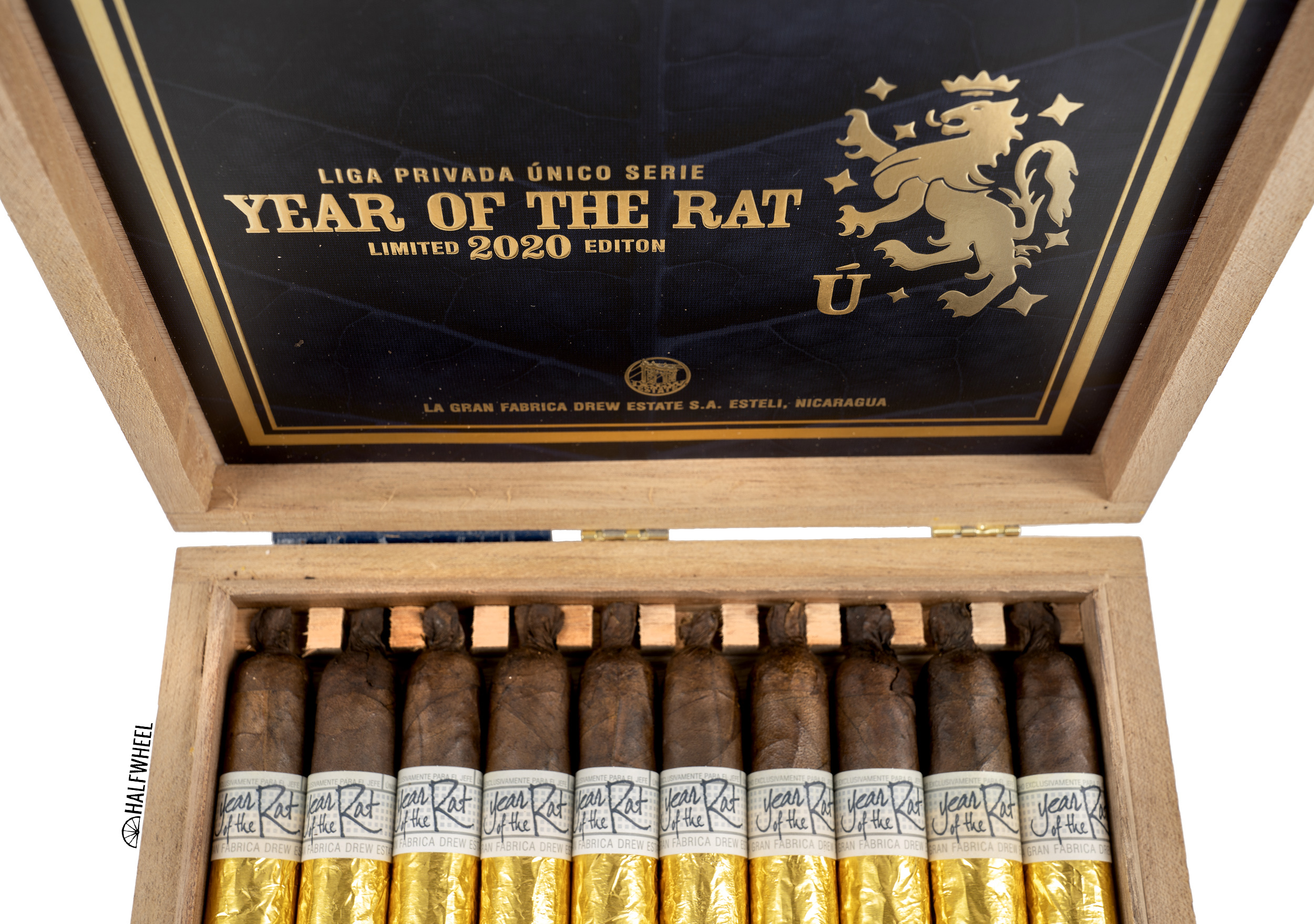 While that first iteration of the Liga Privada Único Serie Year of the Rat came out in October 2016, the cigar would make a return on a widespread basis in January 2020 when the company announced its release as part of the 2020 Tobacco Plus Expo. It would now head to Drew Diplomat Retail Program stores who would be hosting in-store events where Drew Diplomat consumers could purchase up to four boxes. It would also now be released in celebration of the Year of the Rat, the Chinese Zodiac symbol, as opposed to its previous tie-in with the Panthers. 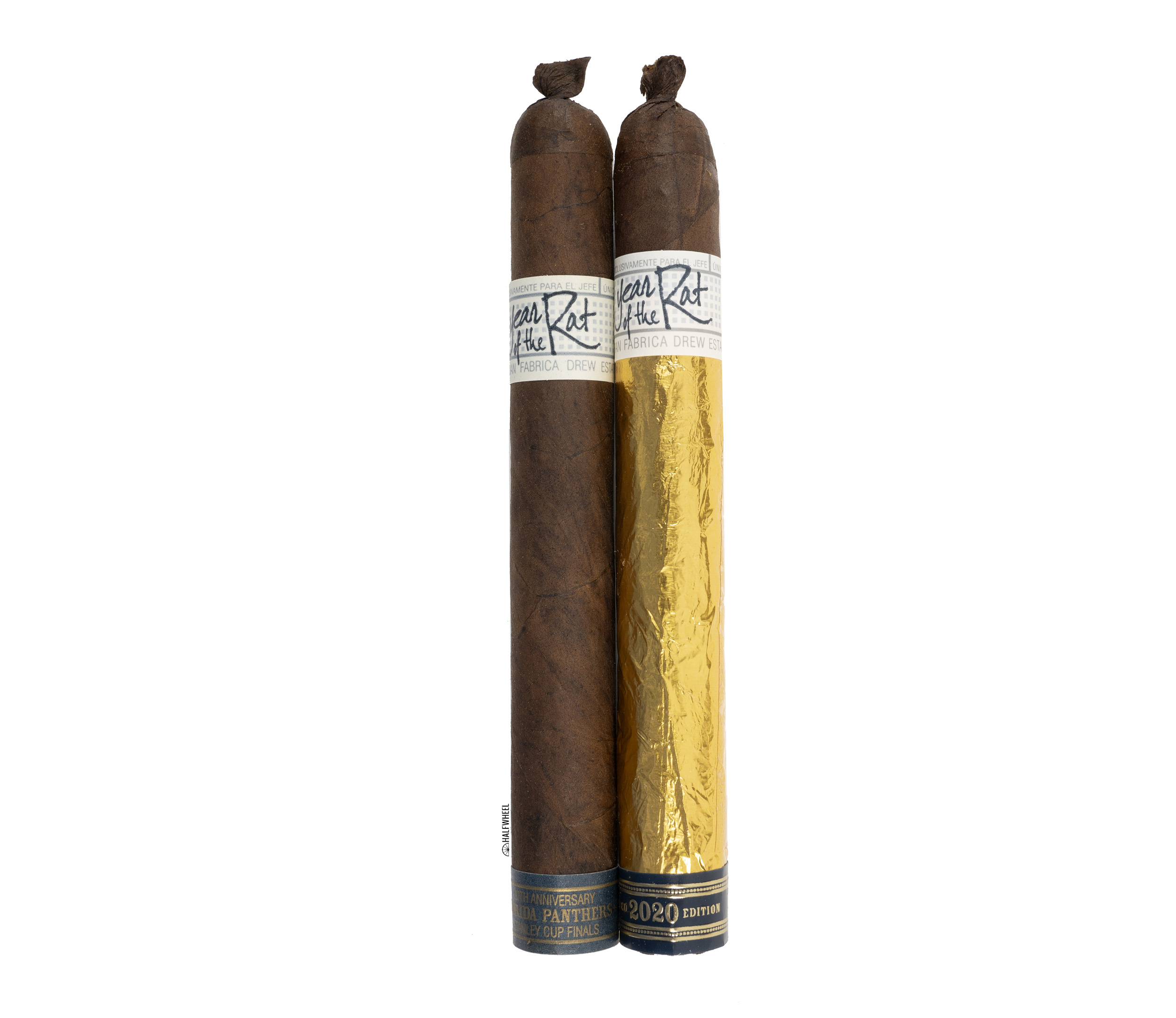 Both releases share the same specs: a 5 1/2 x 46 corona that uses a Connecticut broadleaf wrapper, Brazilian binder and fillers from Nicaragua and Honduras. While the original version was priced at $14, the rereleased version costs $15.99 per cigar and $159.97 per box of 10 cigars, before taxes. 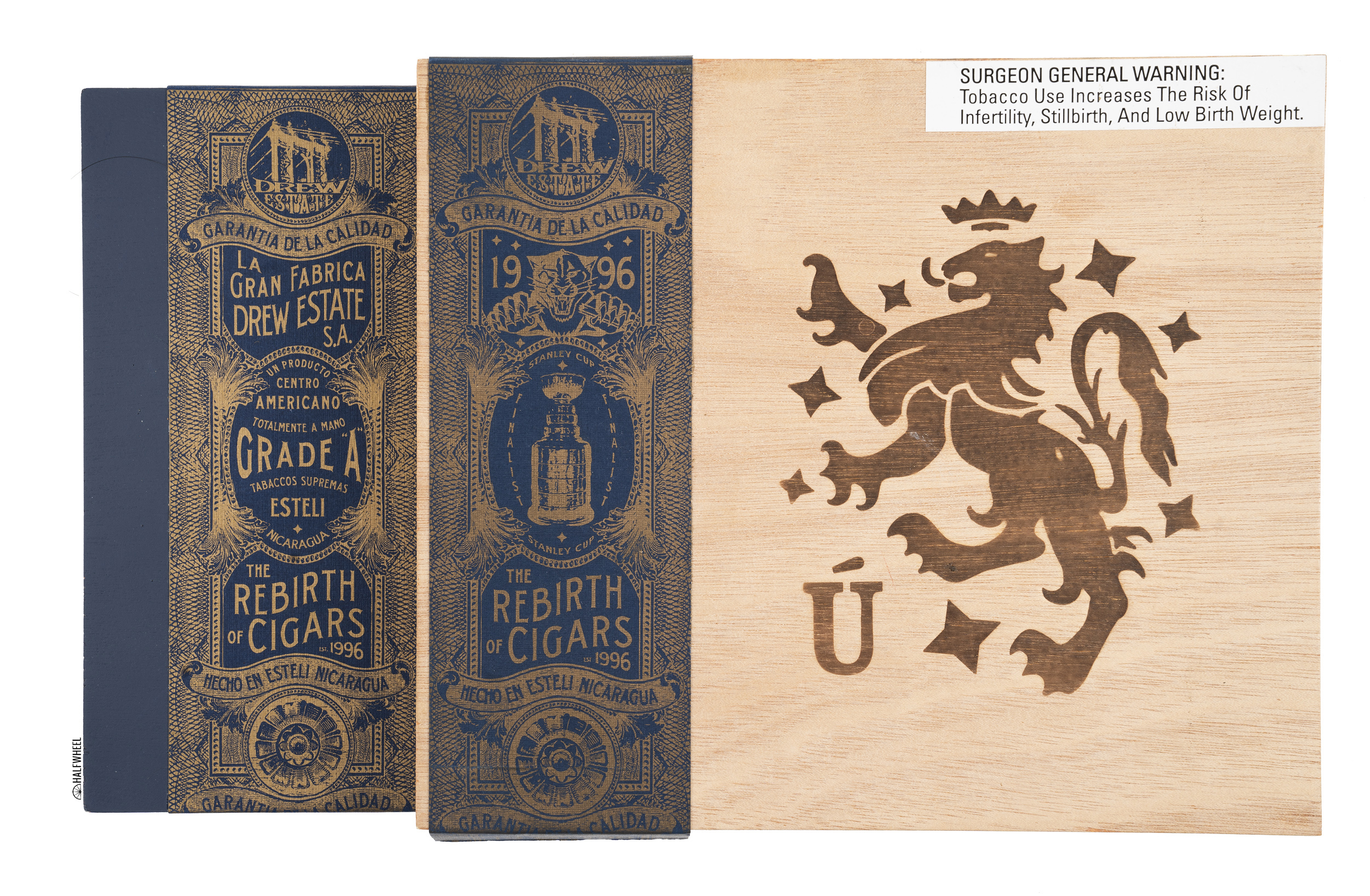 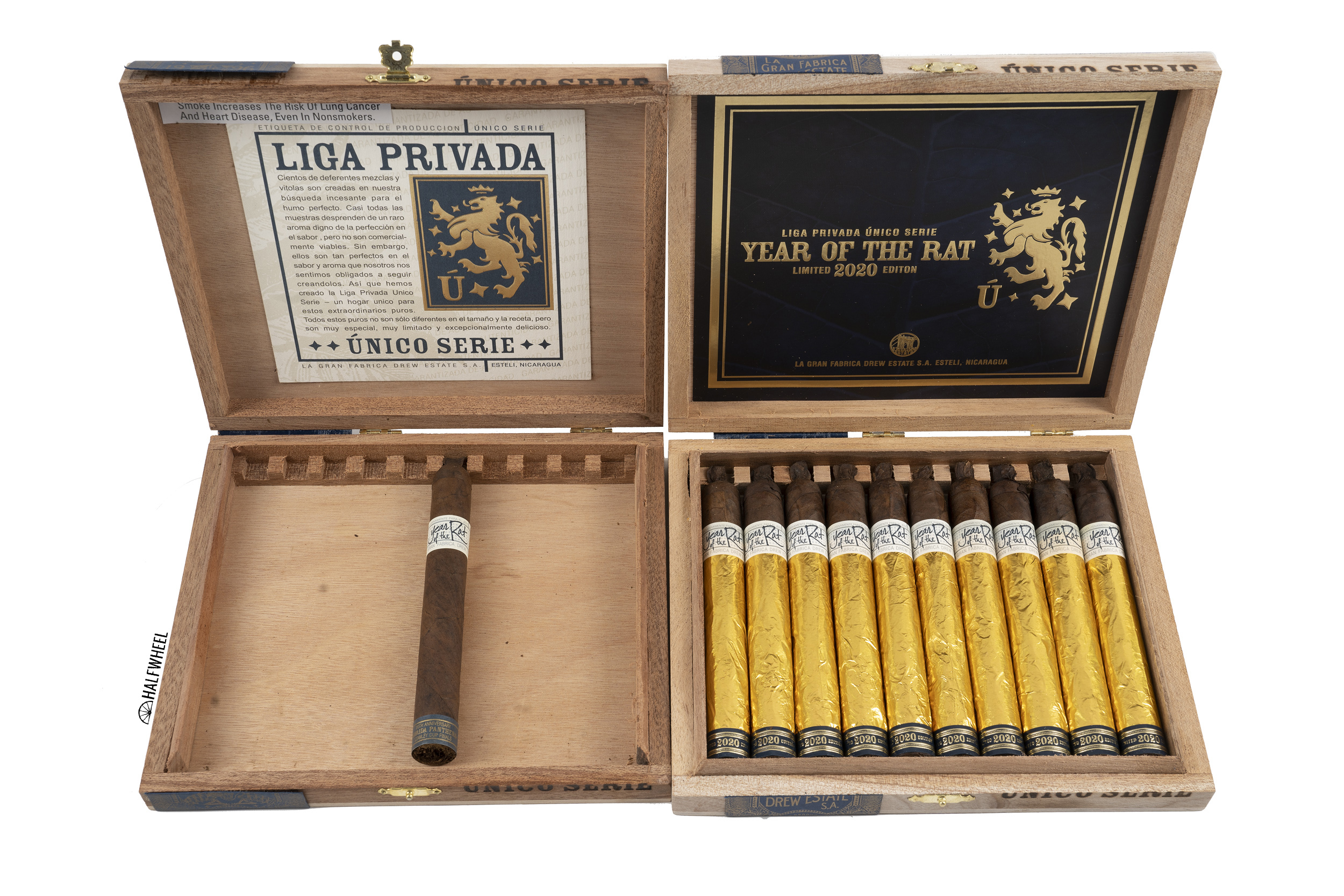 Here’s what I said about the original Liga Privada Único Serie Year of the Rat when I reviewed it in December 2016:

This is a cigar that is incredibly close in size to the Dirty Rat, a very good cigar in its own right and one that has become a bit more readily available to consumers. The Year of the Rat changes dimensions a bit but holds many of the same core flavors, and while it’s a perfectly enjoyable cigar—and one I’d like to enjoy at the BB&T Center someday in conjunction with a Panthers’ game—in my opinion, if you chase this you’re bound to get more out the bands than the cigar underneath compared to its sibling. That said, if you can get some and you’re a big enough fan of the line to pay the premium on the secondary market, or are fortunate enough to get some in person, I can’t say I’d advise you to do otherwise. 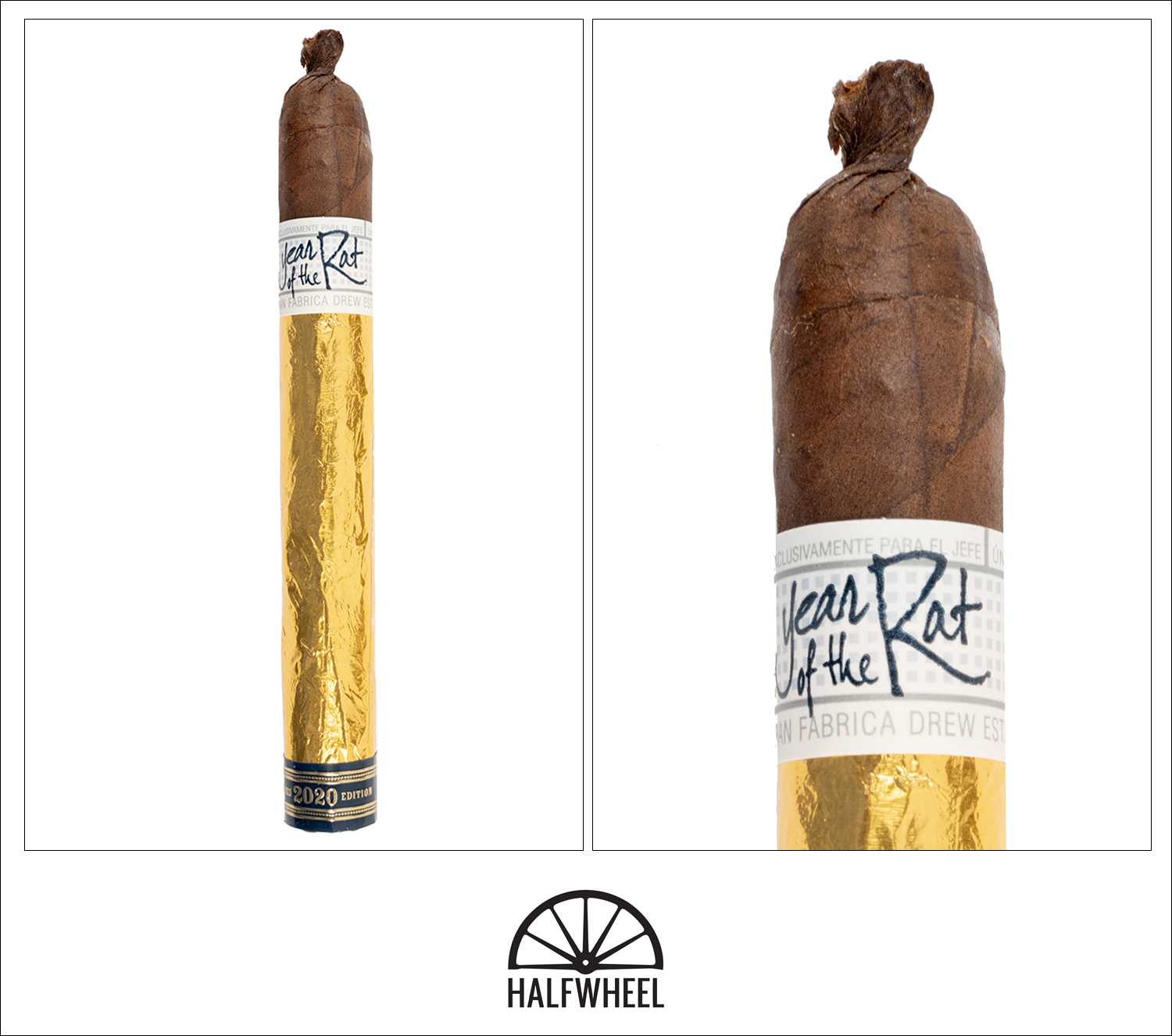 This new Year of the Rat is more festively dressed than its predecessor, now wearing a gold foil sleeve between the primary band and the footboard, which gets an update from the original and now declaring this a 2020 limited edition as opposed to celebrating the Florida Panthers’ 10th anniversary of making the Stanley Cup Finals in 1996. Also, the box reflects this as well, though there’s a notable typo in the word Edition, as the box calls it a Limited Editon, while the foot bands are correct. Beyond those two things, the cigar looks much the same, wearing the fantail cap and with a broadleaf wrapper in that dark brown hue so synonymous with Liga Privada. It has some mottling, and there are spots where the coloration between the veins and leaf is fairly pronounced, but the veins are small, minimizing any visual or textural distractions. It’s rolled well, firm but still offering a bit of give, and with a fan cap that is just a touch thicker than I remember in other similar presentations. The foot of the cigar is drawing me in with some sweetness, a very faint grape jelly that reminds me of what would come out of a single-serve packet at a diner. Yet the more prominent aromas are dry and toasty with a slight nuttiness. If anything, the dryness of the tobacco seems responsible for the tingle in my nostrils, more so than any pepper. Air moves without issue on the cold draw, offering more sweetness that is now closer to center stage, while the toast and nuts move back just a bit.

This new Liga Privada Único Serie Year of the Rat starts off with a rich, creamy smoke that quickly picks up black pepper and earthiness but doesn’t lose its welcoming texture. It’s not long before a retrohale reveals a pronounced evolution, delivering a hit of bright black pepper wrapped in a dairy creaminess that moves towards a slightly metallic sensation on the finish. As much as I’d like to take a few retrohales, I find the experience to best when they are more spaced out and used as accents. Indeed, the flavor is much more balanced and well rounded, with creaminess doing an admirable job cloaking the pepper and earth in the first inch. As the burn line makes its way towards the midpoint, there’s some building pepper and the flavor is starting to get a bit more robust, seemingly drawing on the Connecticut broadleaf as those flavors become more prevalent. Smoke pours off the cigar as it did with seemingly any Drew Estate cigar, while the draw is easy and burn line even. Flavor is medium-plus, body is medium-full, and strength is medium.

The start of the second half of the Liga Privada Único Serie Year of the Rat makes me realize that I’m smoking the cigar quite slowly, both to savor its flavor and because it doesn’t seem to require any regular puffs in order to keep combusting. The progression towards a more peppery profile has slowed, with just a bit of rocky pepper now tingling the tongue. The overall profile is still creamy and fairly tame, a lush smoke that offers plenty of body and smoke with each puff. The final third brings on a woodiness that I haven’t picked up to this point, and it arrives fairly quickly, stepping right into the forefront of the profile. That in turn brings about some more pronounced black pepper, particularly through the nose where it is much more straightforward than it had been earlier. The cigar finishes out closer to full flavor and body, while strength is medium and building, though I’m not sure if it will hit me with that much nicotine when all is said and done after about 90 minutes of smoking time.

Given that it has been about three-and-a-half years since I reviewed the original Liga Privada Year of the Rat, I can't say I have an incredibly distinct recollection as to its profile, at least not without reading my notes. I recall it being good, but not good enough to have me hopping on a plane to catch the next Florida Panthers game and pick some up in person, or scouring the internet looking for a box on the secondary market. If anything, that cigar made me think about tracking down some more Dirty Rats, which had become much more widely available and is a cigar I still hold in fairly high regard, particularly when thinking about the original release. This new version only slightly changes that assessment; I'd certainly have no reservation of smoking a few more and maybe even picking up a box for the humidor, and I think fans of any of the Rat offerings should find this a welcome addition to the family. It capably holds its own amongst that group, as the flavors are generally well-balanced, sufficiently complex, and generally very friendly to the palate. I still find myself surprised and impressed by how subtle and creamy the cigar can be while remaining capable of delivering some more potent broadleaf notes, something that might be the most impressive and notable reason to recommend this. I'm certainly looking forward to smoking a few more to see if the consistency holds up across multiple samples, but for now, this is about as go-to of a Liga Privada as I have smoked in recent memory.