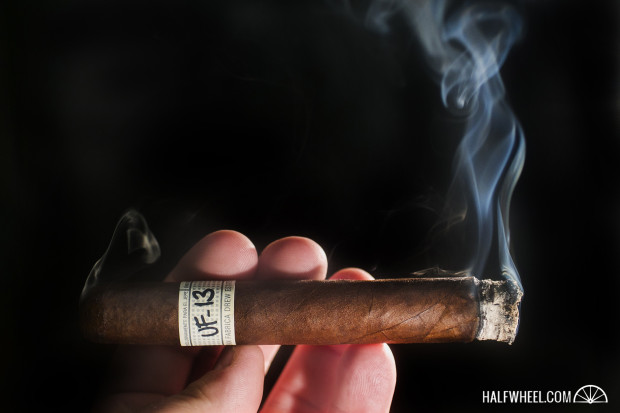 The Liga Privada Único Serie UF-13 Dark was predictably anticipated. Based on the T52 blend, the UF-13 Dark has gone through multiple size and name changes since it was first conceived, and even had the wrapper changed at some point in its life before being released. The version that showed up last March featured a unique fantail cap,

Here is what I said in my original review almost exactly a year ago:

The Liga Privada Único Serie UF-13 Dark is impressively rolled, covered in a dark espresso brown wrapper that is still slick with oil to the touch. It is a bit spongy when squeezed, but not overly so, and there is a very slight but noticeable box-press. Aroma from the wrapper is a combination of strong spices, dark chocolate, espresso, earth and barnyard. The fan cap is very well constructed, and really adds another layer to the physical look of the cigar.

The UF13 starts out with immediate and extremely strong flavors of bakers spices, gritty earth, leather, espresso and dark chocolate. Each of the flavors are quite distinct, and there is a really nice black pepper note on the retrohale that helps the complexity of the profile quite a bit without being too overwhelming. There is almost no spice on the lips or tongue at all, but a wonderful vanilla sweetness starts to show itself after the first 15 puffs or so, contrasting well with the black pepper and earthiness that is already present. 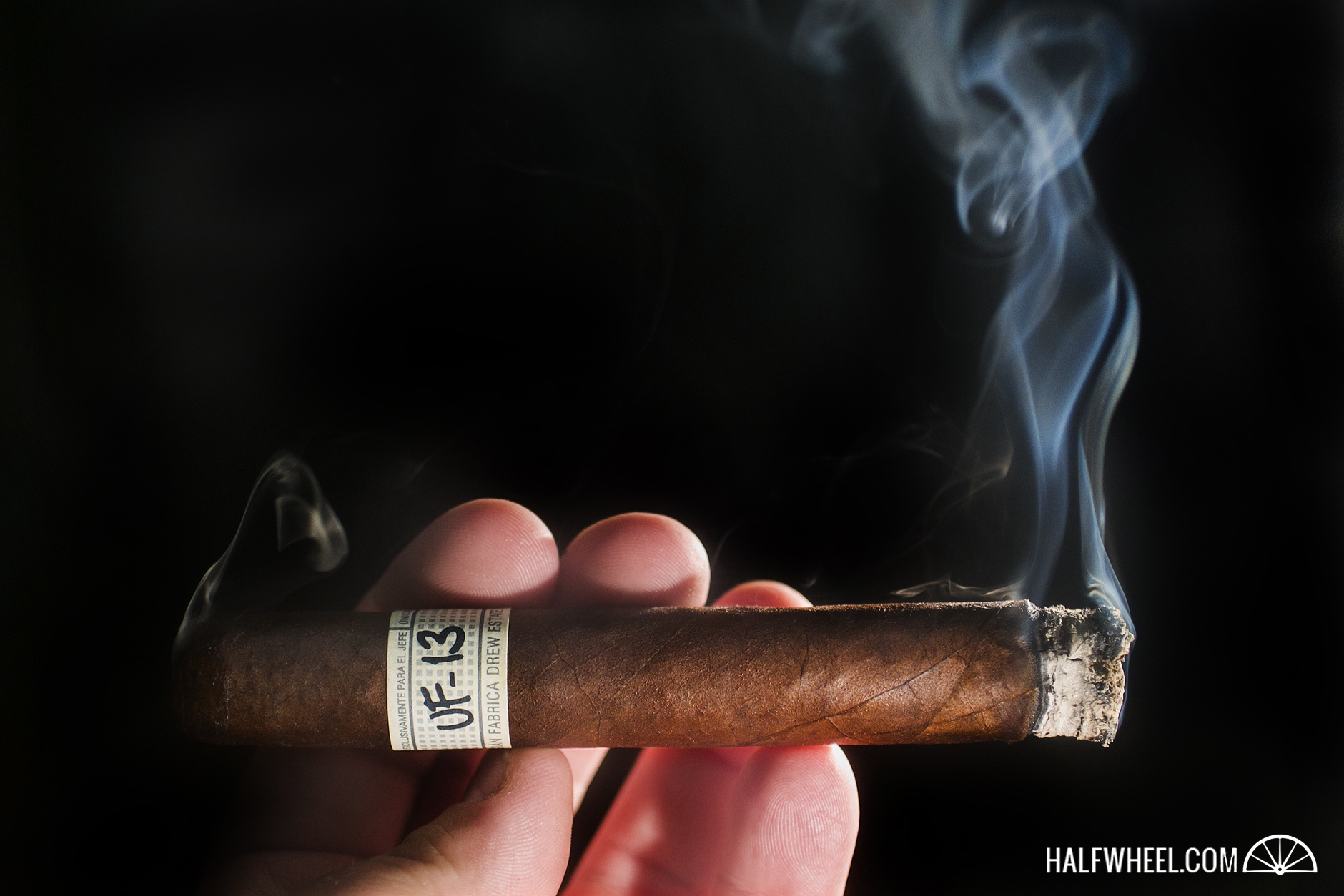 In the second third, the vanilla sweetness begins to morph slowly but distinctly into more of a rich chocolate nougat note, and stays that way until the end of the cigar. The black pepper that was so prevalent on the forefront in the first third has waned a bit, although it is still strong enough to remain a major player in the profile. Interestingly, while the pepper has decreased, the spice on the tongue actually increases a bit in strength during the second third. The sweetness stays in profile until the end of the cigar, and I am able to smoke the nub down to less than a half inch before putting it down.

Construction-wise, the Liga Privada UF-13 Dark preforms as expected, with a burn that is a bit wavy to start, a draw that has just the right amount of resistance, and an almost overwhelming amount of smoke that reminded me of a grass fire in scope. The overall strength starts out firmly in the medium range, and while it does increase noticeably during the progression of the smoke, unlike when fresh, it never crosses the full mark ending the cigar about halfway between medium and full.

Site sponsor Superior Cigars has the UF-13 Darks in stock.

There is a reason the Liga Privada Único Serie UF-13 Dark was my top rated cigar last year, and I am reminded why every time I smoke one. Dark and earthy with just the right combination of black pepper and sweetness, it is the very definition of a flavor bomb. In addition, it is a cigar that is neither too strong nor too mild to enjoy and features excellent construction overall, although the amount of smoke it puts out can sometimes get annoying. The year of age has increased the sweetness while taming both the strength and meatiness that was in the profile when it was fresh, but my overall enjoyment of the cigar as a whole remains about the same. While I will always love the Dirty Rat and Velvet Rat, the UF-13 Dark remains my favorite Único Serie to date.