For those concerned about there not being enough choice when it came to Drew Estate’s Liga Privada line, 2018 has almost certainly been a good year.

As the company celebrated the brand’s 10th anniversary—albeit with some disagreement from our staff about the accuracy of that number—it rolled out two new lines, Liga Privada 10 Aniversario and Liga Privada H99, the first new additions to the Liga Privada family since 2010, as well as three new sizes for each of the existing Liga Privada No. 9 and T-52 lines.

In addition, it borrowed an existing size from its ACID line, the Nasty, which is a 4 x 52 short pyramid, though instead of a taper just at the head, the entire cigar tapers up from the foot. 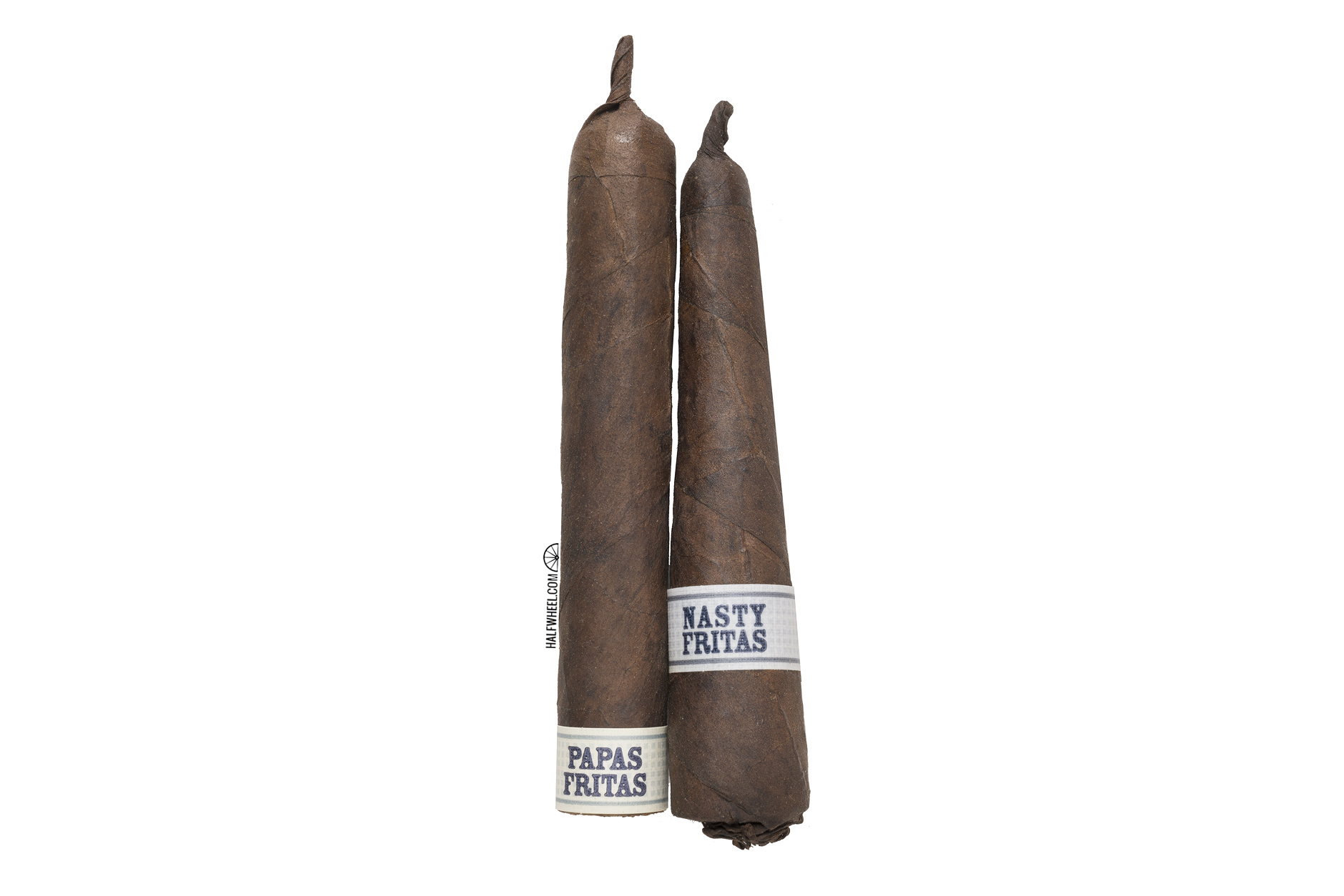 Like its well-known sibling, Papas Fritas, the Nasty Fritas is made using Nicaraguan and Honduran filler tobaccos left over from the Liga Privada No. 9 and T52 lines, which get short cut before being wrapped in a traditional Brazilian Mata Fina binder and broadleaf oscuro wrapper grown in Connecticut.

The cigar is relatively affordable as well, coming with an MSRP of just $6.25 per stick, before taxes, or $325 for a box of 50 cigars. 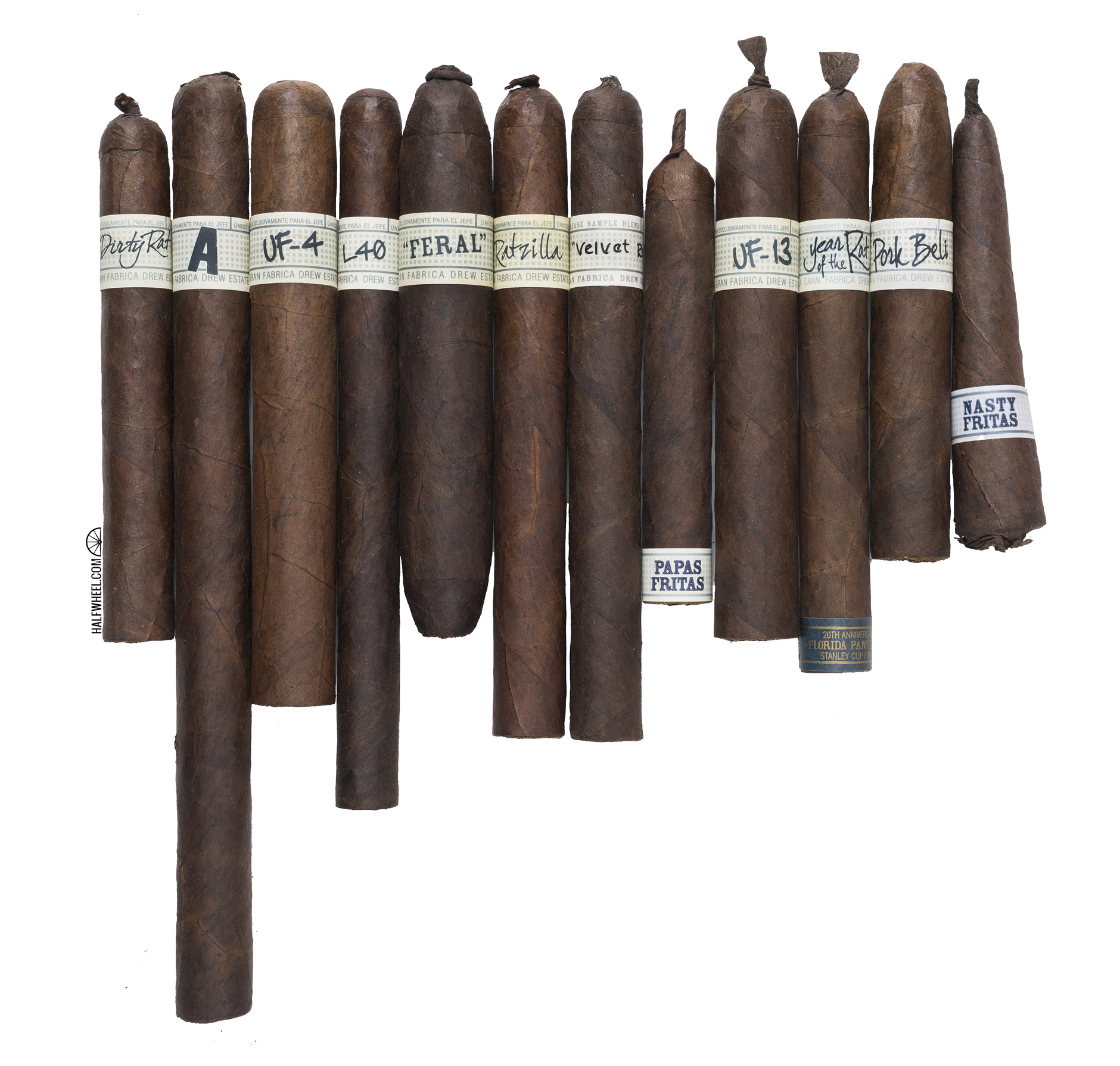 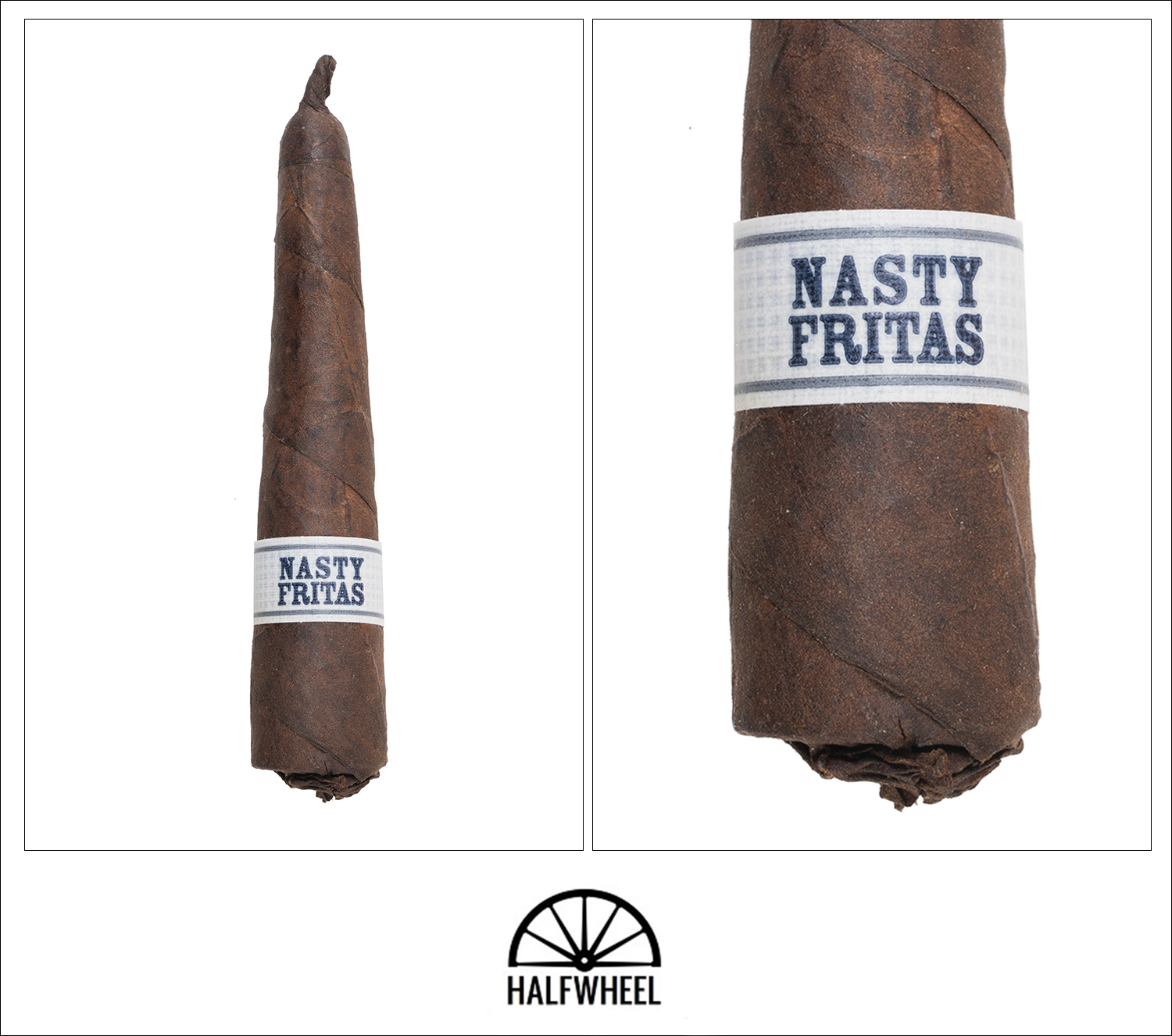 I’d love what goes through the mind of a “traditional” cigar smoker when they first encounter the Nasty Fritas; I’m inclined to think my sense of novelty, impression and/or disgust may have been dulled over time, or at least that a non-standard shape doesn’t elicit some more passionate response any longer. The cap on the first cigar I smoked had become detached slightly from the rest of the cigar, now sitting like an adult’s baseball cap on the head of a child. It’s firm but not quite rock hard, and consistent from head to foot, and while the roll looks smooth, some of the wrapper is much more rustic and bumpy than that on an average cigar. The covered foot offers a surprising amount of mixed berry jelly sweetness, with just a bit of pepper at the very tail end, along with sporadic notes of earth and forest. The cold draw isn’t tight, but rather a bit awkward given how tiny the head is, as I think my cut resulted in about a 34 ring gauge, noticeably smaller than a standard lancero. It’s fairly subdued in its flavors, showing just remnants of berries and earth, along with touches of chocolate brownie and black coffee.

The covered foot begins to swell and unfold upon lighting, with copious amounts of thick, light gray smoke pouring off the cigar before the first draw is taken. Fear not Liga smokers—this one does not disappoint in smoke quantity. That initial puff delivers a very pleasing profile, repeating the berry sweetness without overstepping while also hinting at some sweet, damp earth and finishing with just a bit of pepper for the front third of the tongue. Even with a very smooth draw, the cigar doesn’t burn terribly quickly, but the flavor moves fairly quickly to incorporate a bit more significant earth and tree bark, while pepper is largely holding steady. Amidst it all is an interesting and very enjoyable creaminess that smooths over the profile and seems to only stand out when the palate focuses on it. As the burn line gets close to finishing with the first third, the profile seems to settle down a bit in terms of vibrancy, though I do get an interesting pine cone aroma from the still-billowing smoke. 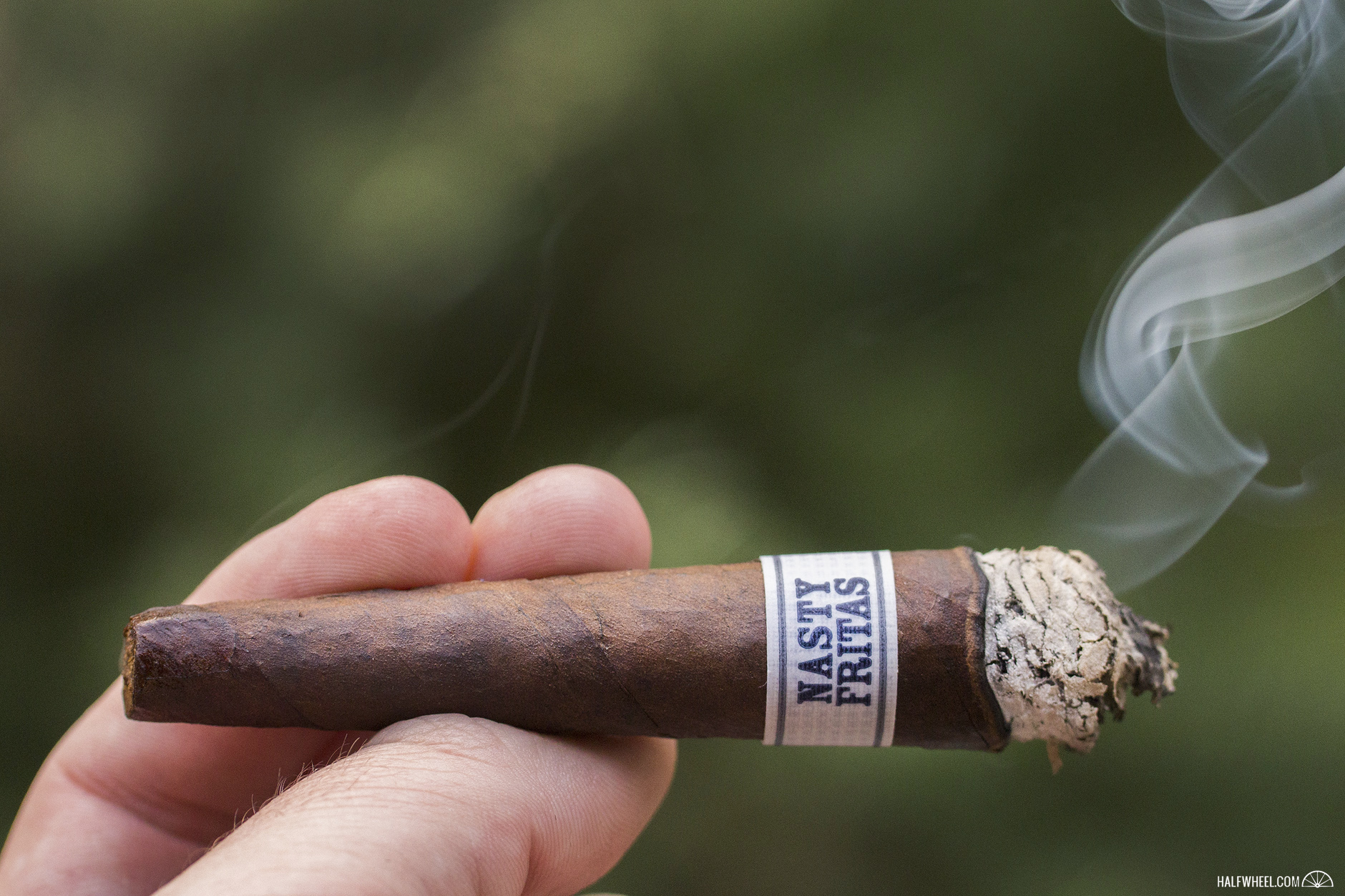 It’s the quantity of smoke—and it’s seemingly relentless production—that is getting most of my attention at the start of the Nasty Fritas’ second third, but behind that there is some flavor change happening as well. I’m sensing a departure of the creaminess and sweetness for what is quickly becoming a more robust profile rooted in earth and pepper, the latter of which does a good job working on my olfactory nerves following a retrohale and increases steadily across the midway line. The second sample flirts with a cocoa powder note through the nose, though it’s easily overshadowed by the increasingly robust pepper. It also offers a slightly waxy taste on certain puffs, fleeting but noticeable. A very light and aromatic berry note returns to the smoke’s aroma as the rests, signaling another change to the profile as well as the commencement of the final third. 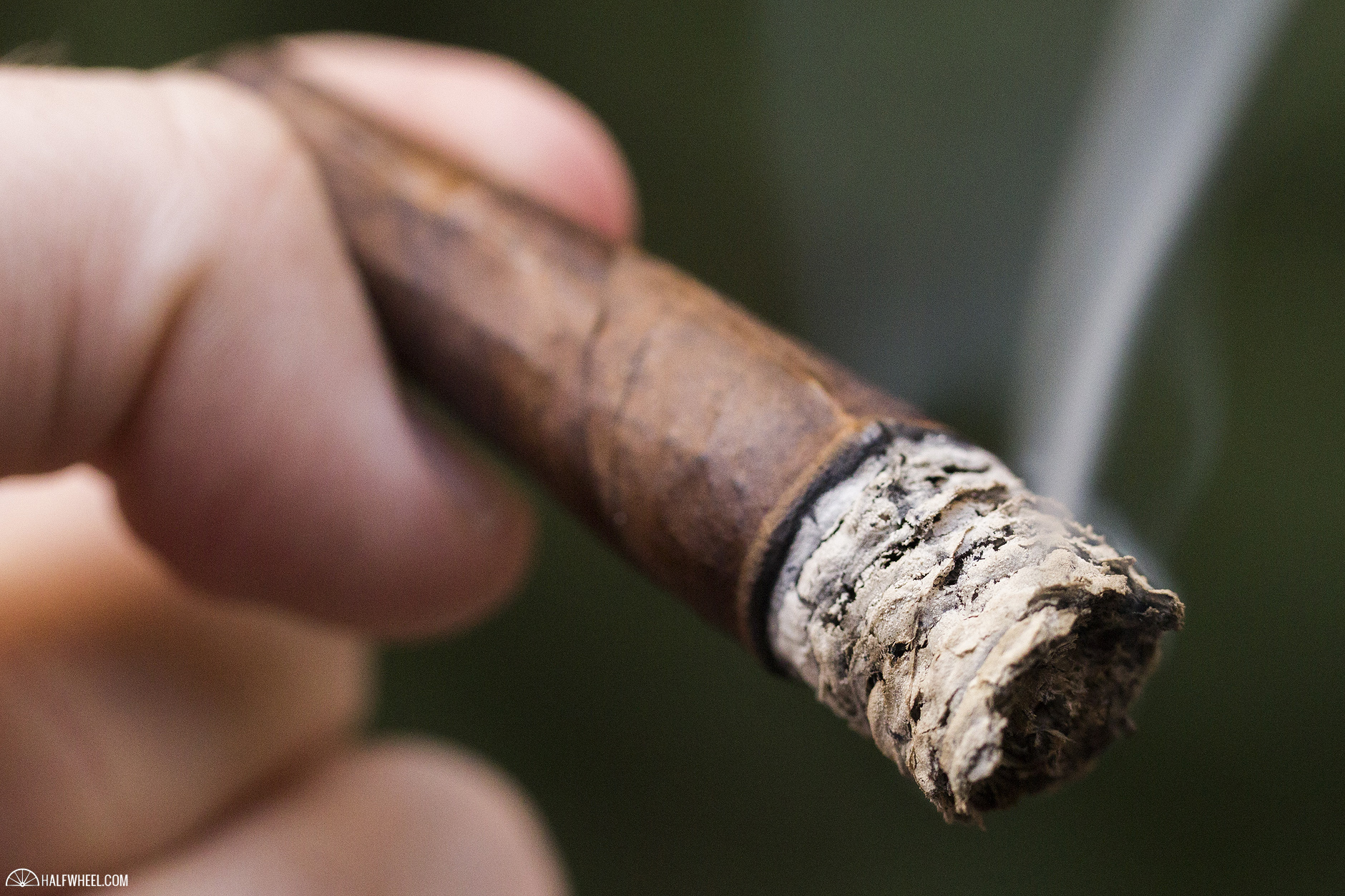 There’s now some chalk in the profile as the Nasty Fritas gets into its final third, and I’m trying to pay some extra attention to how the shrinking ring gauge affects the intensity and balance of the flavors. If anything, the profile settles down quite a bit as far as intensity, though holds onto some of the chalky earth and berry sweetness while creaminess returns for one more appearance. The pepper is also well-restrained, and it seems to teeter back and forth between a heartier black pepper and a brighter white pepper almost with every puff. Even down to its final puffs, which now show aromas of slightly damp firewood, the Nasty Fritas continues to be a smoke producing machine, never letting up on the billows until well after the cigar is in the bottom of the ashtray. 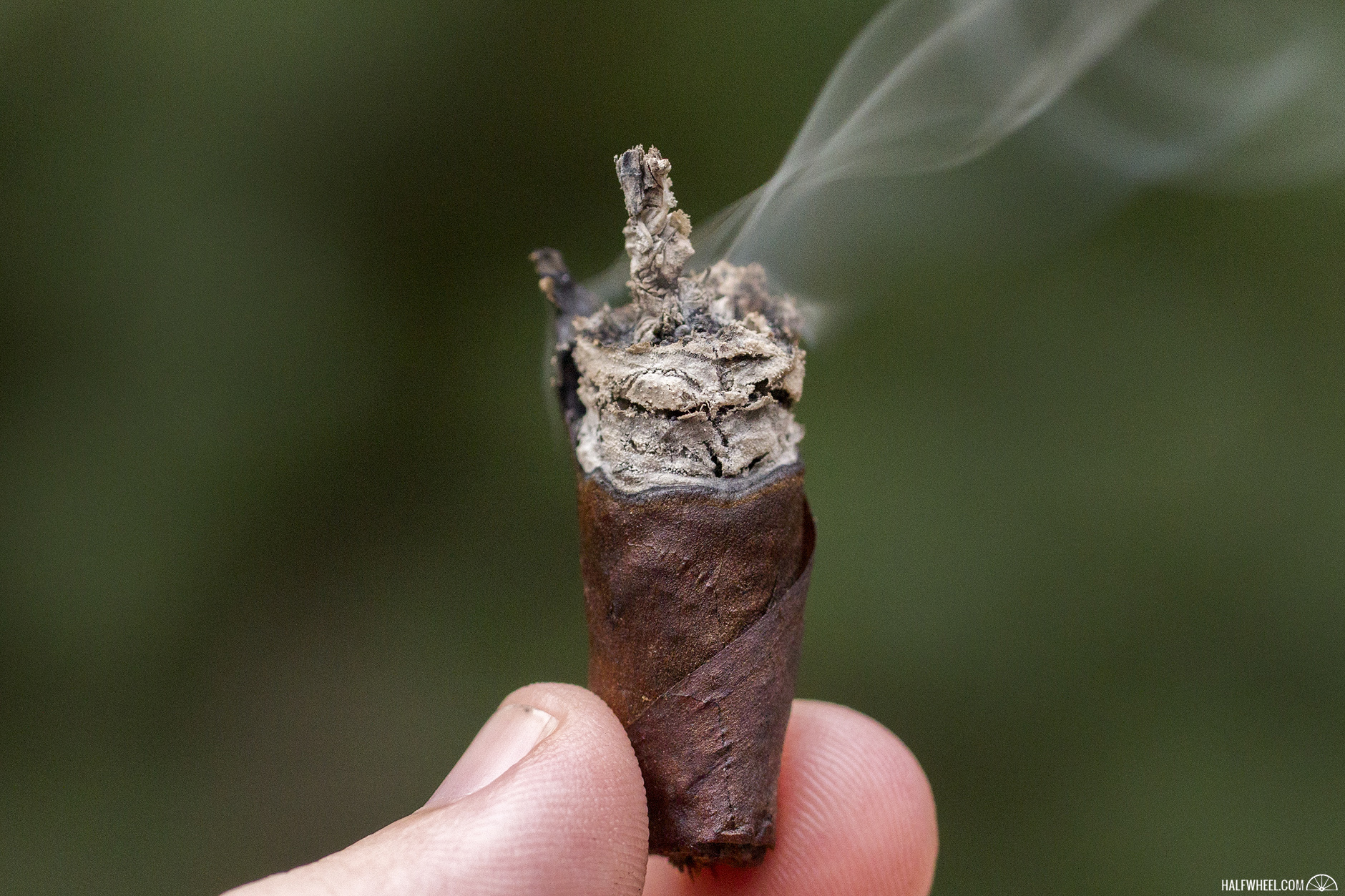 There may be some novelty with the shape of the Nasty Fritas, but there's little novelty to be found once it's lit. This little torpedo billows thick creamy smoke packed with a variety of flavors that engage the sense from start to finish while never overpowering either the tongue or nose. There are a few spots where its complexity and depth gets a bit shallow, probably the biggest gripe I have with the profile, but nothing that would stop me from smoking several more of these. While we don't factor in the bang-for-your-buck element, the Nasty Fritas does well there also; easily stretching to 90 minutes with some patient smoking, all for an MSRP of just under seven bucks.