In 2009, Drew Estate reintroduced the Flying Pig vitola to the world in the form of the Liga Privada No. 9. It was limited to just 2,000 boxes and would set the stage for the T52 Flying Pig, Undercrown Flying Pig and Único Serie Feral Flying Pig.

A few years ago, while on a tour at Drew Estate, we ventured into a normally closed-off area of the factory similar to Fuente’s Forbidden Alcove, a place where Drew Estate kept some of its prototypes and experiments. In there was a single bundle of what was labeled, “motherfucking pig.”

The obvious idea was that it was some sort of stronger version of the Flying Pig, but it’s actually an important piece in the Flying Pig lineage.

Nicholas Melillo, executive vice-president of international operations for Drew Estate and the blender behind Dirty Rat and many other Drew Estate products, explained:

Based on the (No. 9) blend there are many ways to go in strength and body depending on how many leaves of each of the blend you put in. The pig blend contains both ligero from Estelí and Jalapa and also viso from Honduras. That particular blend had extra leaves of both making it much stronger than the pig that was officially released.
The (No. 9 Pig) that was released to market place has more viso from Honduras which tones it down compared to the MF pig.

Steve Saka, the former president of Drew Estate, described the inspiration behind the vitola:

It was a cigar shape (vitola) I saw in an 1895 clear-havana Tampa-based factory’s cigar sample catalog that was printed to facilitate their salesmen in taking production orders from tobacconists, drugstores, restaurants, etc. Back then there weren’t brands so much as there were factories from which a retailer would order a thousand of this cigar and a thousand of that cigar to which would be affixed a privately banded ring.
I always was intrigued by the shape and how difficult it would be to make such an oddball fat perfecto, so its production was to satisfy my curiosity more than anything else. It is actually the least profitable of all the Liga Privadas because only one pair is trained to make these unique vitolas and between them they can only produce 125 of these cigars a day. They should be priced about $3 higher, but we wanted to make this cigar treat accessible to more people and since it was limited to just 2,000 production boxes we did not have to concern ourselves with the long term profitability of the cigar. It is intended to be a special “thank you” smoke for all those that have helped to support the Liga Privada brand.
Fwiw, I believe under the Dunhill marquee a very similar shape with the same name was made in Havana in the 1940’s, but they were not the first to make it. Given its amazing success, I expect others will copy it soon.. The wrapper is rich and dark, just like the No. 9 and T52 Flying Pigs, and if I didn’t know what this was, I would assume it was a regular T52 Flying Pig that had lost its band, or of course, some variation on one of the existing blends. The wrapper has a good amount of texture to it and in spots looks much more rustic than I generally associate with Liga Privadas. The pre-light aroma is dark and rich – notes of tree bark, earth and dark chocolate stand out on first inspection. Given that I took a very conservative clip of the cap – right under the pigtail – the cold draw feels just a bit restricted but not overly tight. Spice hits the tip of the tongue while a meatier note hits the rest of the palate.

The first third has an oily spiciness that I don’t recall smoking in either the T52, No. 9 or Feral Flying Pig blends, and while it isn’t harsh or overly peppery in the first quarter of an inch, I can immediately sense the added ligero leaves. My eyes are the first to show any reaction to the added ligero, getting just a bit itchy and tingly from the ambient smoke. An early retrohale delivers a good bit of stinging pepper to the nose, yet the flavor on the tongue remains very well balanced. The flavors are intense though, and there seems to be a building pepper component by the time the burn line gets to the past the slight curve of the foot. Tons and tons of smoke billows off the cigar, true to standard Liga Privada form. The second third of the Liga Privada MF Flying Pig continues mainly along the same path that the first third had laid down: a rich, saucy meatiness backed by a solid yet not terribly overpowering spice and pepper component. The aspect of the cigar that deserves the most note is what it has done to the ambient air: absolutely saturating it with a rich, hearty aroma coming off the cigar – even though I was smoking it outside. It was an absolutely incredible smell to be greeted by and one that I rarely find. 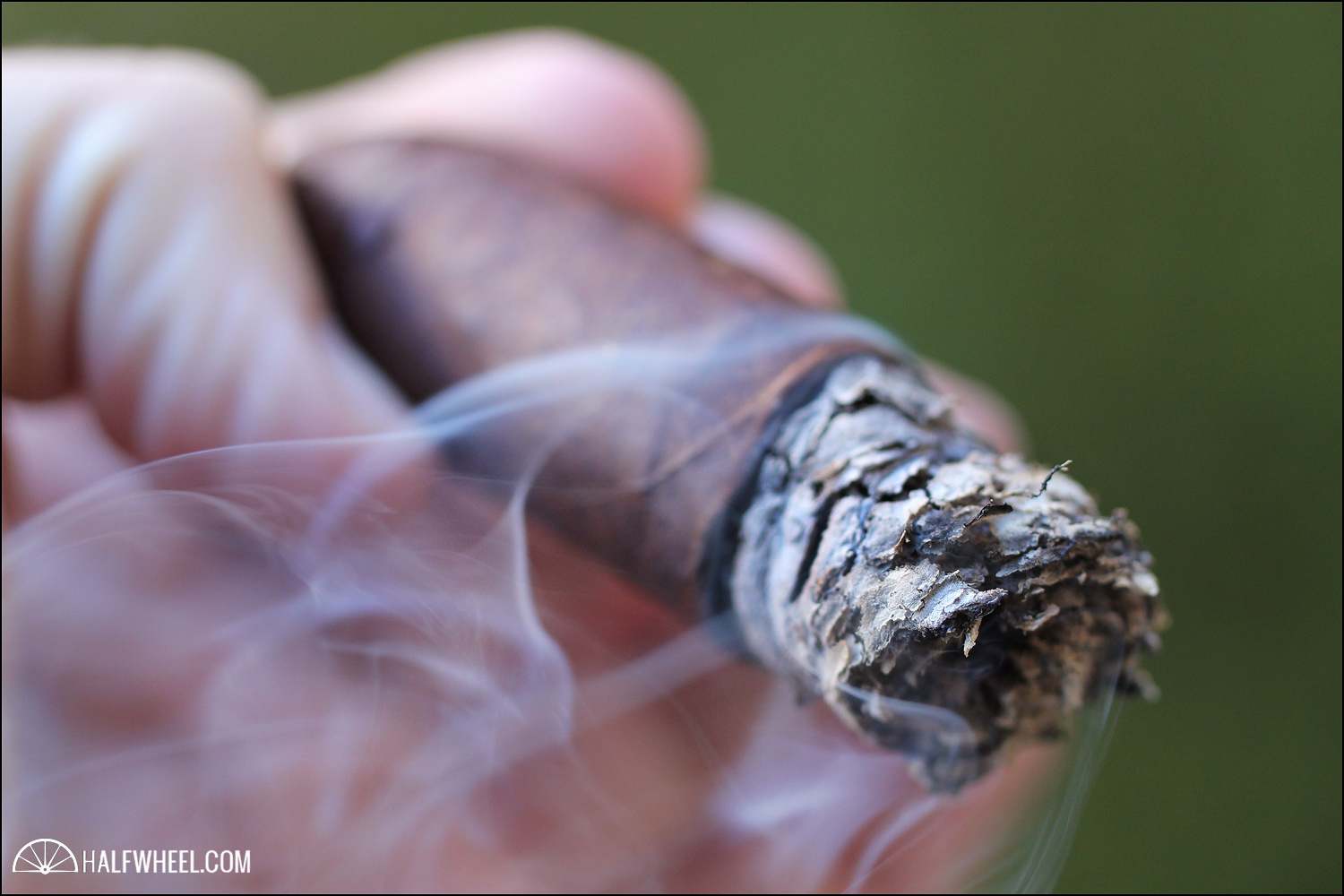 The depth and complexity of flavors remains present heading into the final third of the Flying Pig, though there have been few variations in the journey to this point. The smoke production has slowed a bit, though it is still plentiful. It’s in the final inches where the real serious, more base pepper starts to come out, and finally delivers on the expletive in the name.  Had the flavors been as intense and ramped up in the bulk of the cigar, I probably would have been uttering a few more expletives and exclamations. Either way, the finish is strong, clean and very enjoyable. If you've read my reviews of suggestively named cigars, you know that I often find myself disappointed by the cigar failing to live up to its boastful name. That's the case with the Liga Privada Motherfucking Flying Pig: it never really opened that can of spice and pepper whoop-ass that I thought it would, but what it did deliver is a tremendously rich and flavorful smoke enhanced by a bit more ligero that was enjoyable from start to finish. Top that off with a phenomenal aroma that saturated the air delivered in an enjoyable and unique vitola, and this is a