A few weeks ago I was discussing with Brooks Whittington what cigar I was going to smoke for my upcoming redux review. I was struggling, but ran across an box of the original Undercrown Flying Pig that I reviewed in July 2012. While that cigar is somewhat commonplace today, there was a time in which it was nearly impossible to find. In June 2012, Drew Estate released roughly 200 boxes of that cigar to the Dutch market. It—like many other Flying Pigs—is now much easier to find, but I remember when that cigar was released and the challenges that existed for Americans hoping to smoke the newest cigar from Drew Estate.

I—for a number of reasons—opted to review a different cigar. But today’s review is somewhat connected to that notable Flying Pig.

In late 2020, Drew Estate released another European exclusive, this time with its flagship Liga Privada brand. Unlike that cigar, it seems likely there will be more than 200 boxes, but once again, the cigar is going to be a bit complicated for Drew Estate’s American audience to get their hands on.

The cigar is the Liga Privada Bauhaus, a 4 1/2 x 50 short robusto that uses a Connecticut broadleaf wrapper over a Brazilian binder and fillers from Honduras and Nicaragua.

The name is a reference to the Bauhaus school of design, a post-World War I German-based school that tried to use modern design principles to create architecture and design. 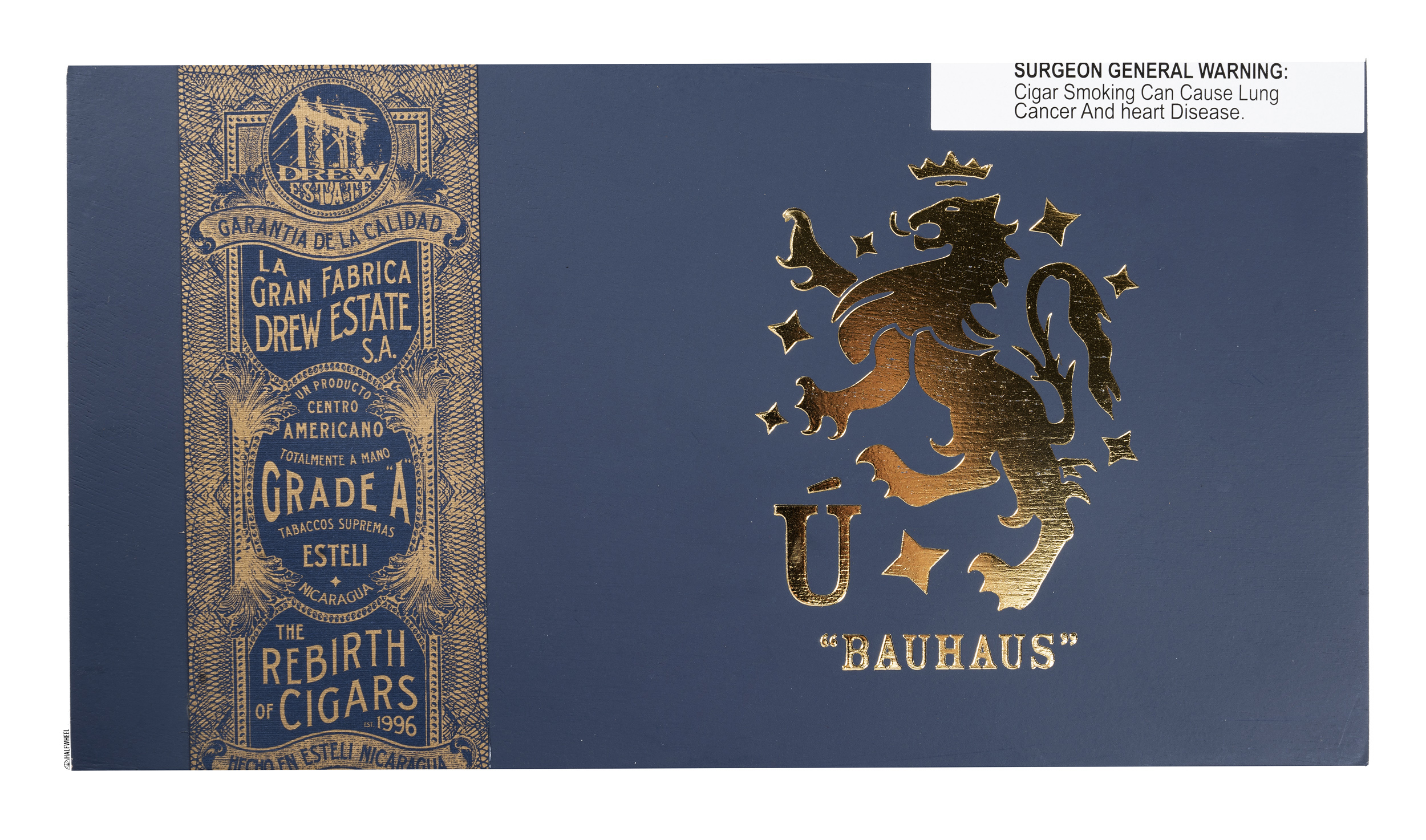 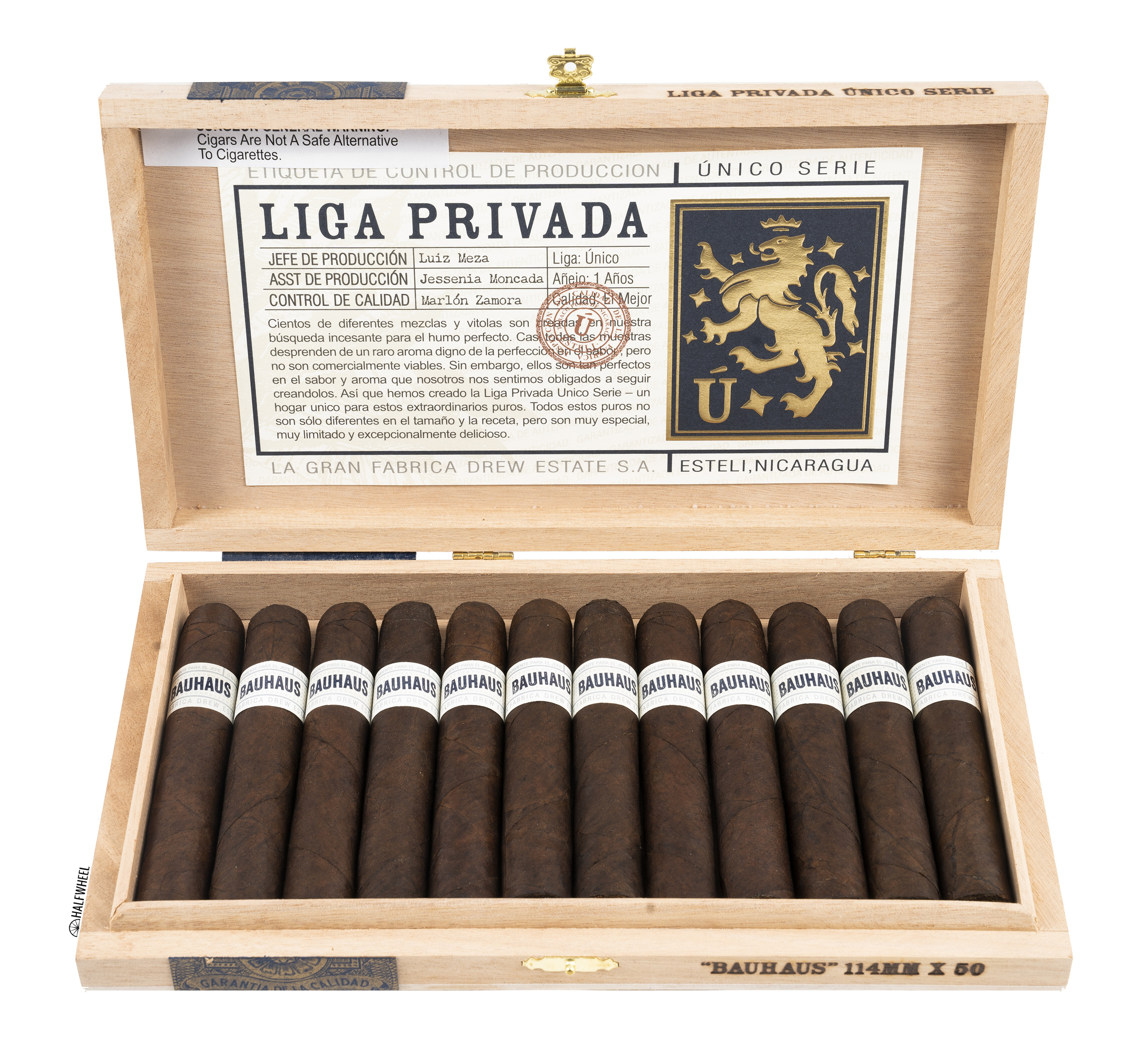 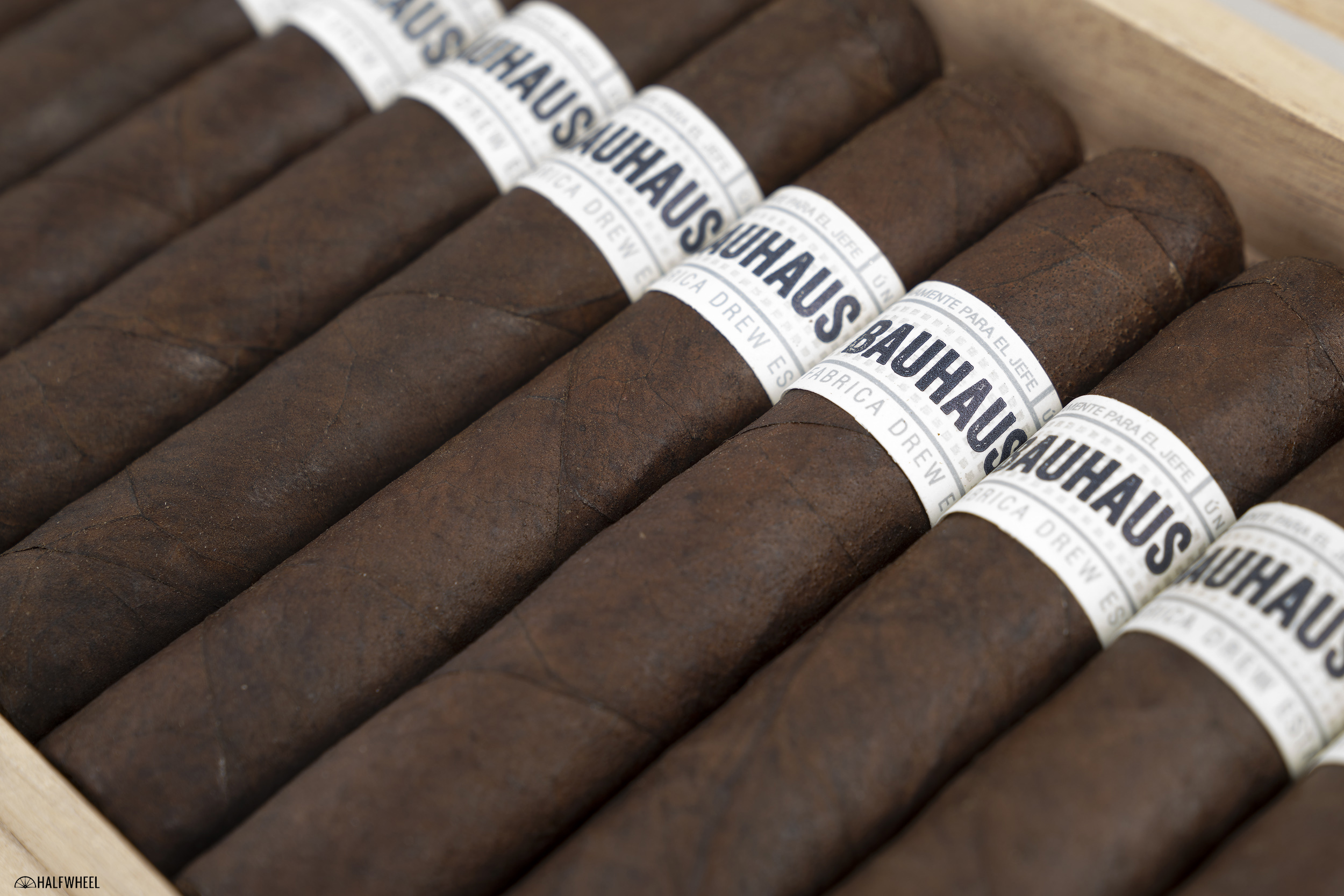 While it’s a European exclusive, as of this article’s publication the Bauhaus is only on shelves in Germany, something that began last week. It’s expected to go on sale in The Netherlands on March 1, 2021, and other countries will follow.

By my count the Bauhaus is the 13th different Liga Privada Único Serie release that has been sold. The Único Series is a sort of catch-all for a variety of Liga Privadas that aren’t part of the core No. 9 or T52 lines. There are regular production items like Papas Fritas, while some of these cigars like the Dirty Rat and Feral Flying Pig are regular production offerings that are made in more limited quantities. Other releases like the UF-4 or Year of the Rat have been made in different years and are more akin to limited editions. There’s also the Liga Privada Único Serie A, which is given away at select events. 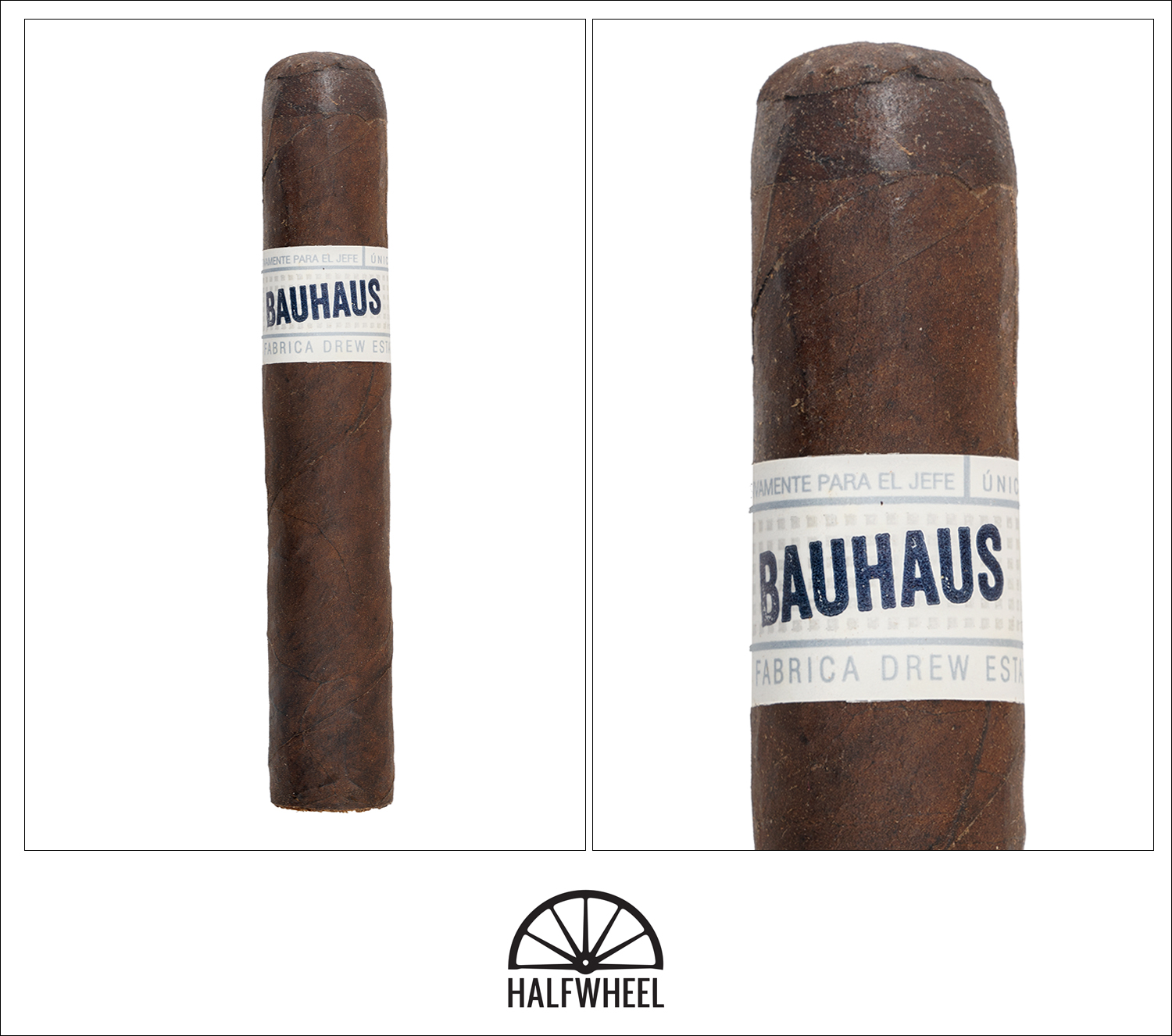 I didn’t write the news story or photograph the cigar for the pictures above, so I was a bit surprised to see the actual size of the Bauhaus. Also something I wasn’t expecting is that these cigars come in cellophane. While some Liga Privadas have come in cellophane, Liga Privada is a brand that I do not think of as doing that. While it’s not to say there aren’t small Liga Privadas, for some reason I expected a larger cigar. Obviously, it has a dark wrapper, but there’s lot of red hues within the leaf. Once out of the cellophane, smelling the wrapper reveals hard pretzels, milk chocolate, barnyard, leather and a bit of peppermint. The foot is sweeter thanks to vanilla and sweet coffee, though there’s not as much as chocolate. Furthermore, the pretzel sensation remains and is joined by a jerky-like meatiness. In terms of tightness, one cigar has a very open draw, another is slightly open and the third is great. Flavor-wise, the cold draws are all pretty similar: red wine, bark, leather, oranges and white pepper.

The Liga Privada Bauhaus begins with tree bark, peanuts, earthiness, white pepper, bread and a sourness that I can’t fully decipher. It takes about 10 seconds, but then the famous Liga Privada smoke production begins, and by smoke volume alone, it looks like I might be smoking two cigars. The tree bark and earthiness remain at the front of the profile on top of sweet cocoa, leather and red pepper. It finishes with red pepper accenting leather, earthiness, creaminess and acorns. Retrohales produce earthiness, red pepper, leather, sunflower seeds and a tonic water-like mineral flavor. The flavor of the tonic water-like minerals dominates the finish on top of earthiness and creaminess. Flavor is full, body is medium-full and strength is medium-full. The draws don’t change much, which means one cigar is a bit challenging to smoke, though because it’s a Liga Privada, it never seems that close to going out.

That tree bark flavor transforms into a combination of redwoods, cedar and a generic woodiness. There’s also some nuttiness, saltiness and red pepper. The finish is a complete 180: bread flavors on top of creaminess, earthiness, leather and nuttiness. Retrohaling has a raw earthiness over black peppercorns, dry cracker and leather. It leads to a finish that has bread and peppercorns on top of some leather. While the second third’s flavor is more interesting than the first, it’s also much more disjointed. The flavors are extremely intertwined, but there’s no real harmony and it leads to an impression of an unfinished canvas. Flavor is full, body is medium-full and strength is full. I’m forced to make touch-ups on two cigars, and multiple touch-ups on the cigar with the very loose draw. While I thought the tree bark was gone, it returns on two cigars. That being said, the redwood flavor remains the dominant force and the cedar is still there. The finish retains a lot of the woodiness—though only the redwoods manage to uniquely stand out—with an underlying sweetness and a bit of black pepper. Retrohales keep some of the generic red wine flavors over oak, orange peels and a bit of liquid smoke. Surprisingly, the finish has a lot of the liquid smoke over top of creaminess and pecans. While the flavor is a bit more harmonious than the second third, it’s even more concentrated than the first and second thirds. As such, the flavors are tougher to identify and I just wish there was more space for them to interact with my palate. Flavor is full, body is medium-full and strength is full. Smoke production wanes a bit, but only one cigar needs a touch-up. This review could have been much shorter: it just needs time. There was a time when Liga Privada was declining in quality—before Drew Estate sold to Swisher—but over the last few years I’ve been very impressed with the recent Liga Privadas. I’d put the Liga Privada No 9 Corona ¡Viva!, Liga Privada 10 Aniversaio and the recent Year of the Rat against any company’s trio of recent releases. The Liga Privada Bauhaus has enough flavors, but they haven’t settled into the most appreciable mixture. Perhaps by the time the cigar goes on sale in the rest of Europe or by the time our American readers are able to have some shipped back it will have found that happy place. For me, I’ll revisit this in August or September when it’s eligible for a redux review.