In mid-October, news began to surface that the Leaf by Oscar line, the one that his been gaining a groundswell of attention over the past year and a half, would be adding a limited release lancero to each of its four blends, with only 50 stores across the United States having access to them.

Now when you hear “so-and-so brand is adding a lancero,” you might wonder if it has something to do with STOGIES World Class Cigars in Houston, Texas, who has steadily been amassing a collection of store exclusive lanceros as part of its H-Town series. The answer to your question is yes, it does have something to do with STOGIES, as owner Jorge Ahued approached “Island” Jim Robinson, the distributor of the Leaf by Oscar line, about doing a limited edition lancero for his store. Robinson agreed, but said he would only do it if the cigar could be offered to other shops outside the state, which is how it came to be released to 50 stores, or just about one per state. 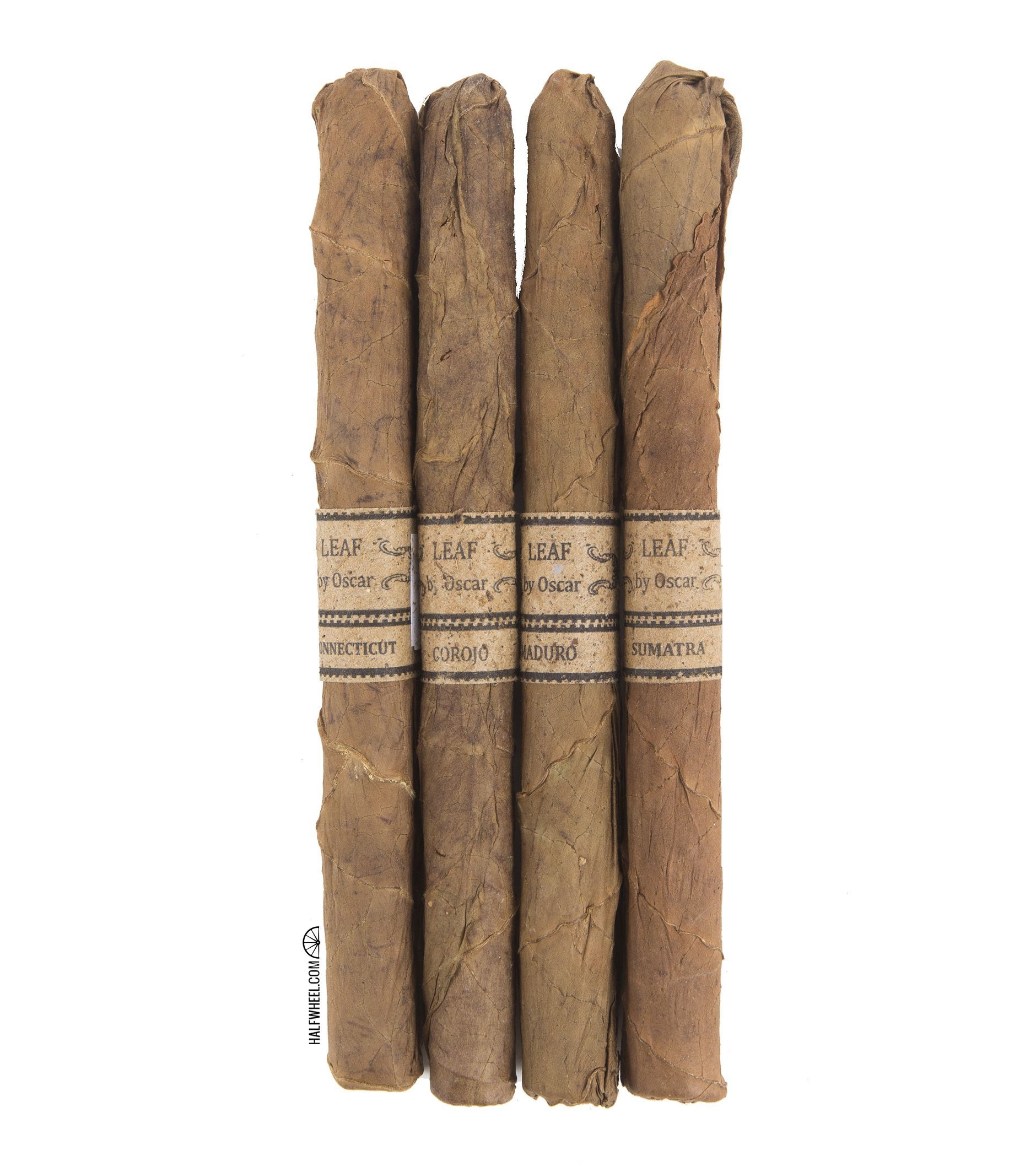 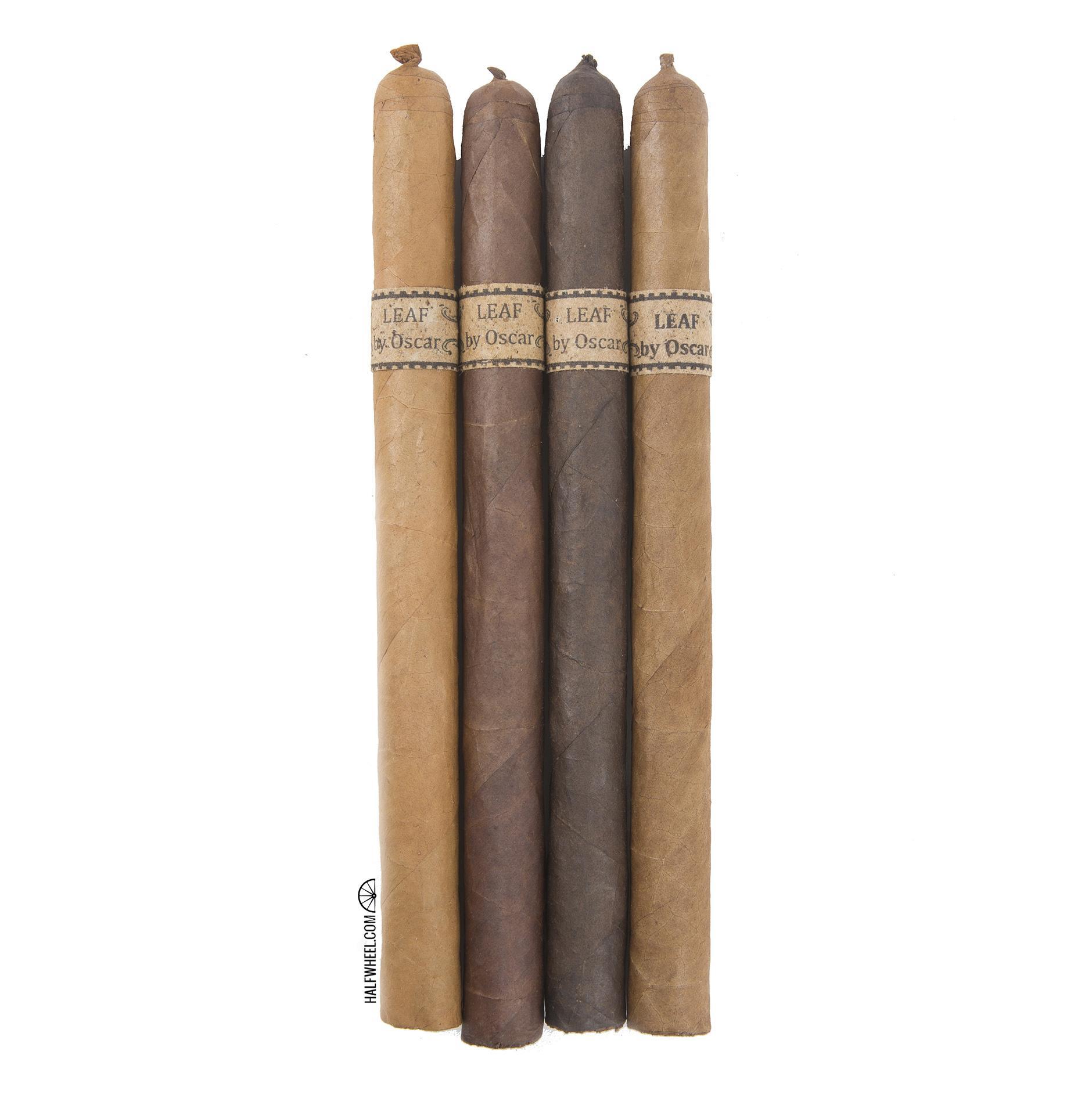 The Leaf by Oscar line has been in circulation for about three years now, beginning as a house cigar for Robinson’s Leaf & Bean stores in Pittsburgh, Penn., but it has quickly gained a national following in the past year or so, as Robinson recently told halfwheel that he currently has upwards of 1,000 stores carrying the cigar. While the Leaf by Oscar line is offered in a toro (6 x 50) and double toro (6 x 60) vitola, a robusto (5 x 50) is also made for Robinson’s Leaf & Bean as a store exclusive.

The line uses a Honduran binder and filler with four choices of wrappers: Honduran Connecticut, Nicaraguan Jalapa maduro, Honduran corojo or Ecuadorian sumatra. Each stick sells for $8.50, which come packaged in 20-count bundles. 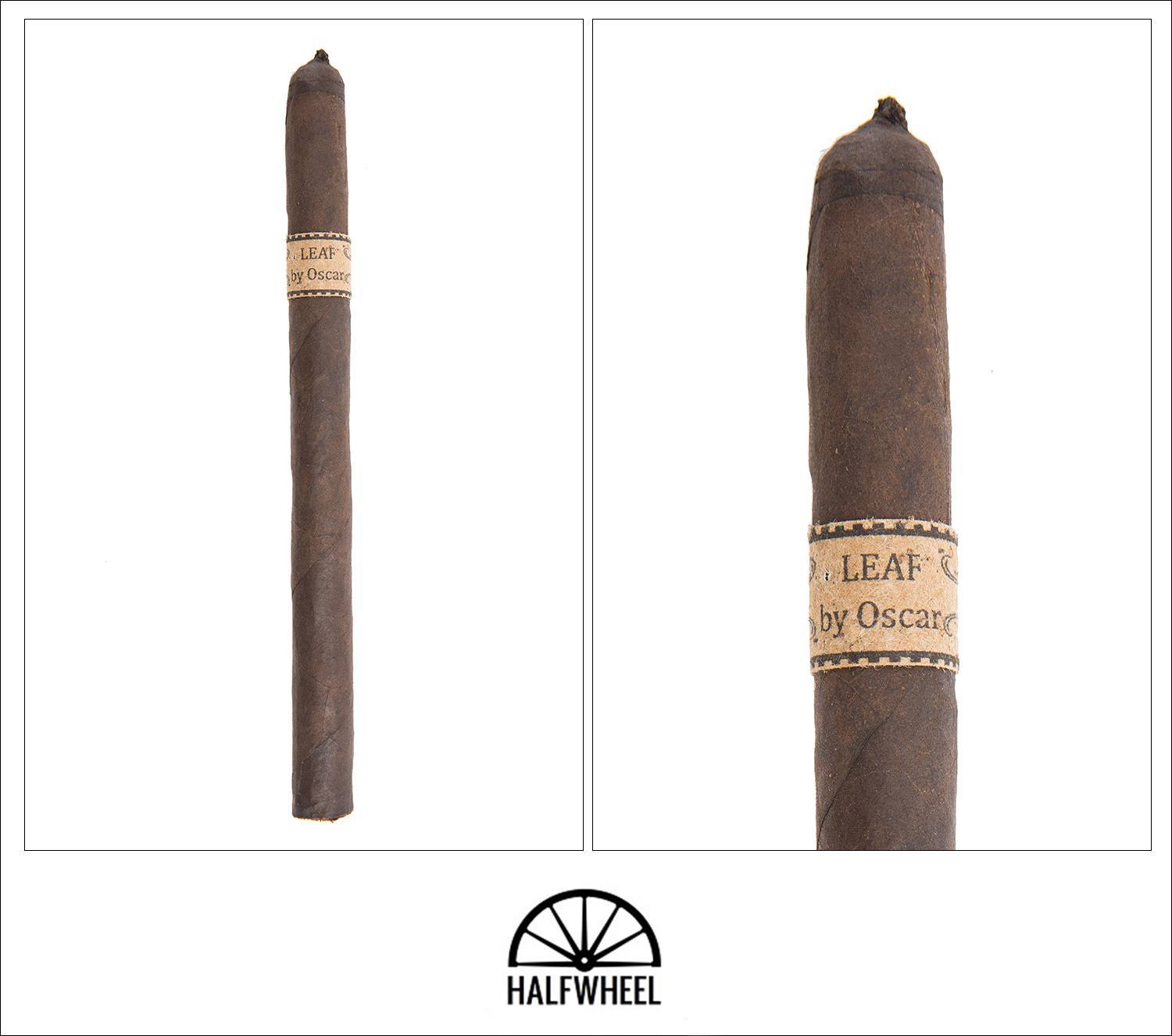 Not to state the obvious, but it’s pretty easy to see what the most visually appealing and unique part of the Leaf by Oscar line is, the tobacco leaf that covers the actual cigar. While the extra leaf is the most noticeable, don’t overlook the band both on the outside and the one that adorns the actual cigar; they are made by a small Honduran company using the stems of tobacco leaves from Valladares’ factory, which further adds to the depth of the name Leaf and the fact that this is a product that is 100 percent tobacco. That all said, you might be looking at the leaf used to package the cigar and be thinking that sure doesn’t look like a maduro, and you’d be correct. There isn’t necessarily a correlation between the wrapper and what the finished cigar comes wrapped in, other than that decorative leaf comes from the same stocks as what is used on the cigar, but because of damage or appearance isn’t suitable to be used as a wrapper. There is a very appealing ritual aspect to taking the top leaf off, and something I hope everyone who smokes a Leaf takes the time to appreciate and savor. Underneath the caramel colored packaging leaf, the Leaf by Oscar Maduro Lancero is a dark shade of brown, almost chocolate syrup like in appearance with a good number of veins both sizable and small. From a distance it’s a standard-looking lancero, but up close it’s easy to see a number of bumps and dimples in the cigar, suggesting that the rollers might not have had aesthetics on their mind while making it. In terms of firmness it is fairly middle of the road; there is the occasional soft spot but neither sample feels particularly firm anywhere but at the head. From the foot there is just a bit of fruit sugar sweetness that falls somewhere between peach and plum in my memory, while a heavier undertone of earth gives the aroma some gravitas. The cold draw is near perfect as far as air movement and shows some more sweetness but with a more complex and dry background that is made up of a bit of wheat toast and some peanut.

The Leaf by Oscar Maduro Lancero gets going right away with a pepper-forward flavor and aroma makeup that is almost blunt on both the palate and nose, though there is no confusion about what the cigar is offering. With maduro cigars, I’m always on the lookout for rich sweetness, and so far there isn’t any, but the pre-light aroma and cold draw have me holding onto hope. As you can see in the photo, the ash begins to crack at a very short length, making a hurried and acute turn for the ashtray within about half an inch. There’s a bit of an issue with combustion, as it’s known that the decorative cover leaf adds a bit of oil to the wrapper while also helping preserve humidity, so it’s something to be mindful of and not be surprised by should you need to relight it. Otherwise the burn so far has been very good, with no issues getting air moving and producing a good amount of smoke, while the burn line has been about as even as one could ask. There is a touch of sweetness starting to enter the equation at the transition to the second third, and I’m eager to find out if it sticks around and develops. 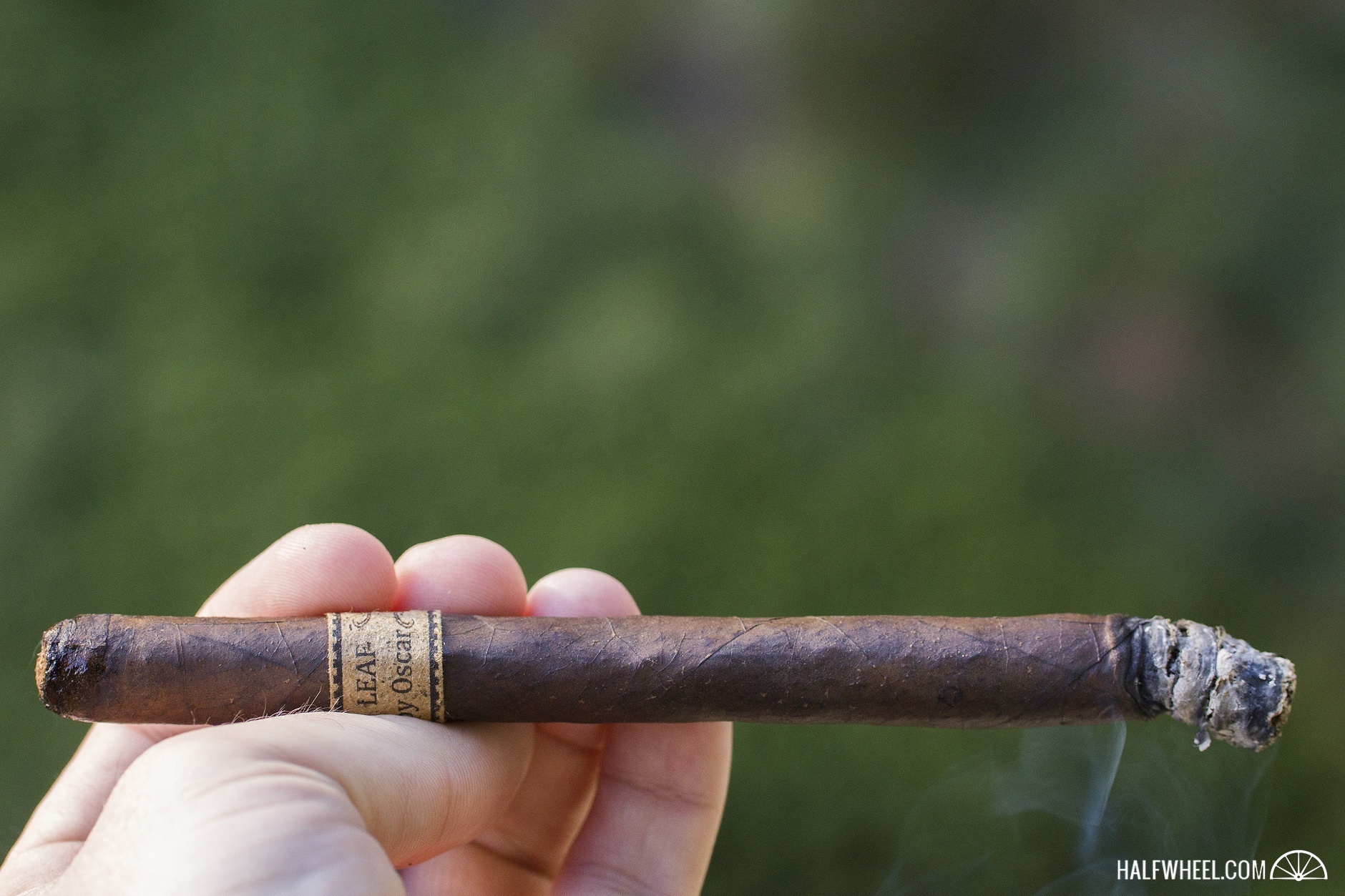 The answer to my question was yes, the fruit note does stick around and opens up quite well, starting with a bit of grape jam before making subtle shifts to apricot and dabbling in a few other expressions that are fleeting but very enjoyable. The pepper from the first puffs has almost completely stepped aside at this point, and while I like a peppery cigar as much as the next guy, the change is both appreciated and enjoyed as a way to show what else this blend has to offer and give the palate a brief respite. The draw continues to be outstanding, and the ash is doing a much better job staying attached than it did in the first third, lasting closer to an inch before giving way either voluntarily or with a little encouragement. There’s a touch of floral aromatics from the cigar as it rests before it picks up a bit of a smoky note, which quickly turns peppery and puts the Leaf by Oscar Maduro Lancero on course for a big finish. 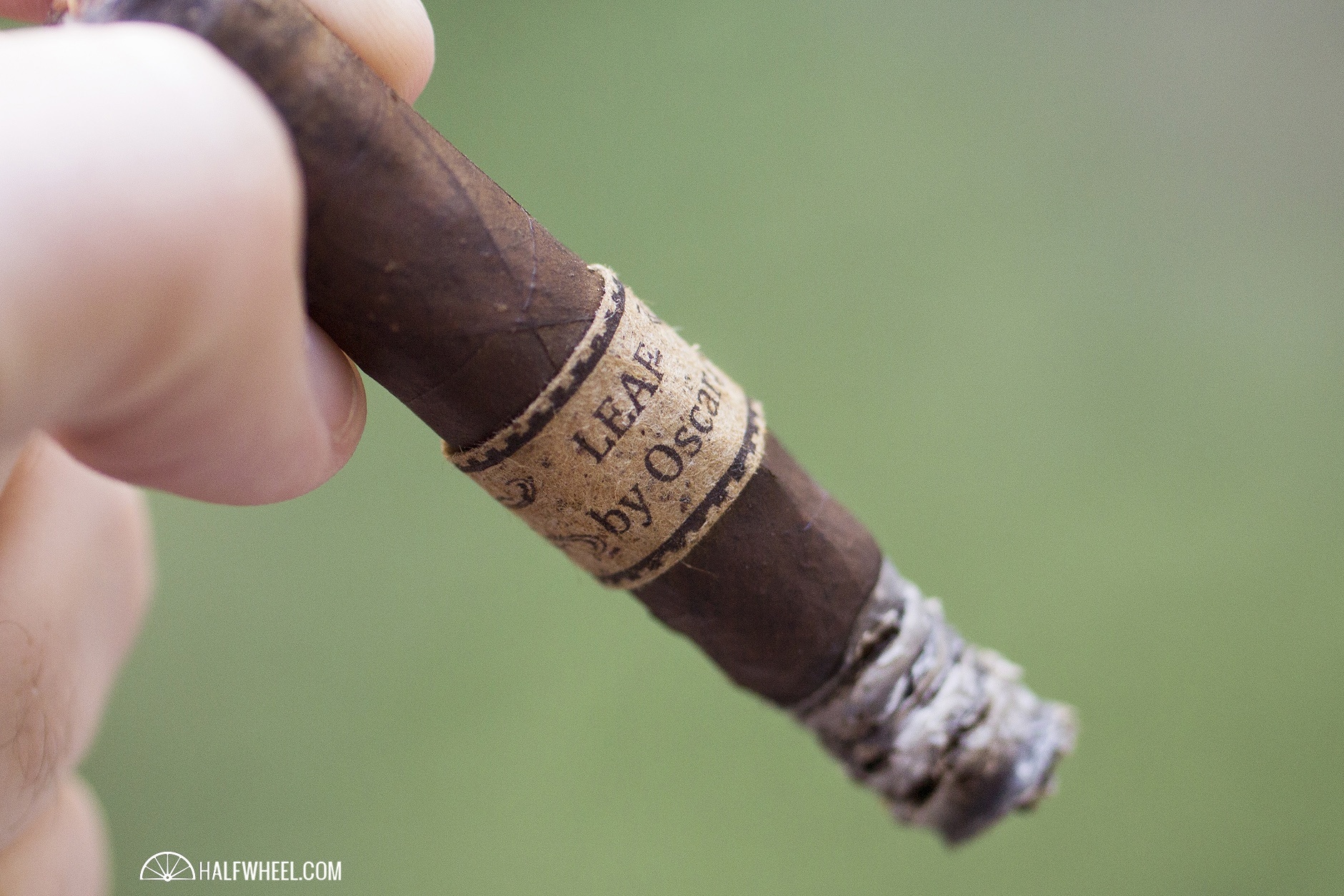 While the transition to the final third of the Leaf by Oscar Maduro Lancero is loaded with pepper, it seems more like a bump in the road than the actual ride, as the cigar fairly quickly settles back down and makes way for subtle amounts of sweetness and the steady rich earth flavor that has been present for most of the cigar. A touch of meatiness comes in as well and makes itself more recognizable than it had been earlier, creating an enjoyable complexity in the final inches. As noted above, the burn has to be tended to in order to keep the cigar burning, and like any lancero, the Leaf by Oscar Maduro can’t be smoked too fast unless you want a hot and slightly burnt taste on your palate. The final puffs become even more complex that is best described as a barbecue sauce style of blending; smokiness, a touch of sweetness, some pepper, a bit of earth and a big mouth feel to close the cigar out. 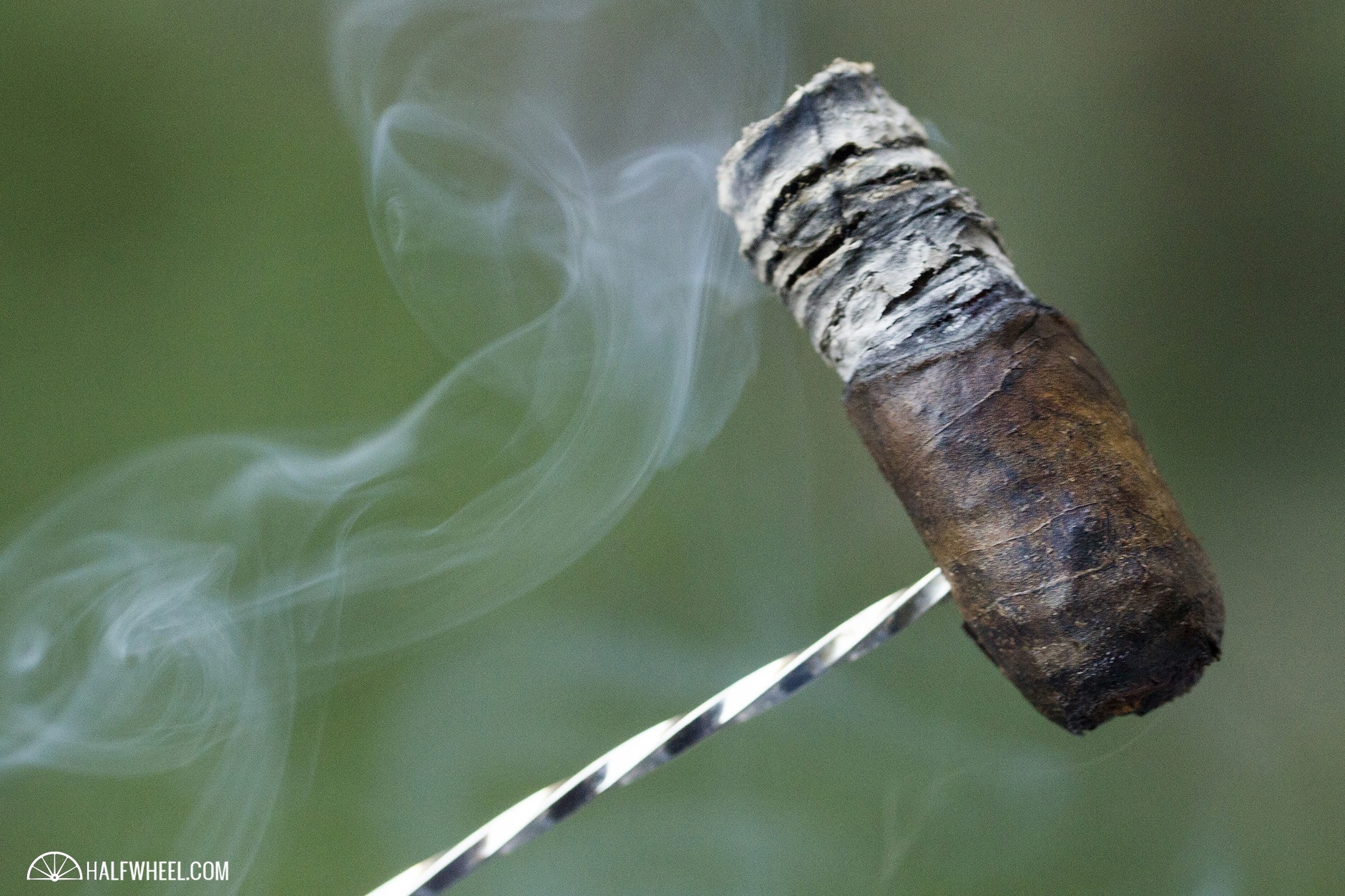 While it would be easy to chalk the Leaf by Oscar up as just another cigar with a bit of novelty to its packaging, nothing could be further from the truth. Under that decorative and distinctive piece of tobacco is a very flavorful cigar, one that offers strength, pepper, earth, sweetness and complexity. While the combustion was a bit more challenging than I would have preferred, it's something that can easily be overlooked given the flavors that the cigar offers. This lancero is a great addition to the Leaf by Oscar line and definitely one worth picking up.