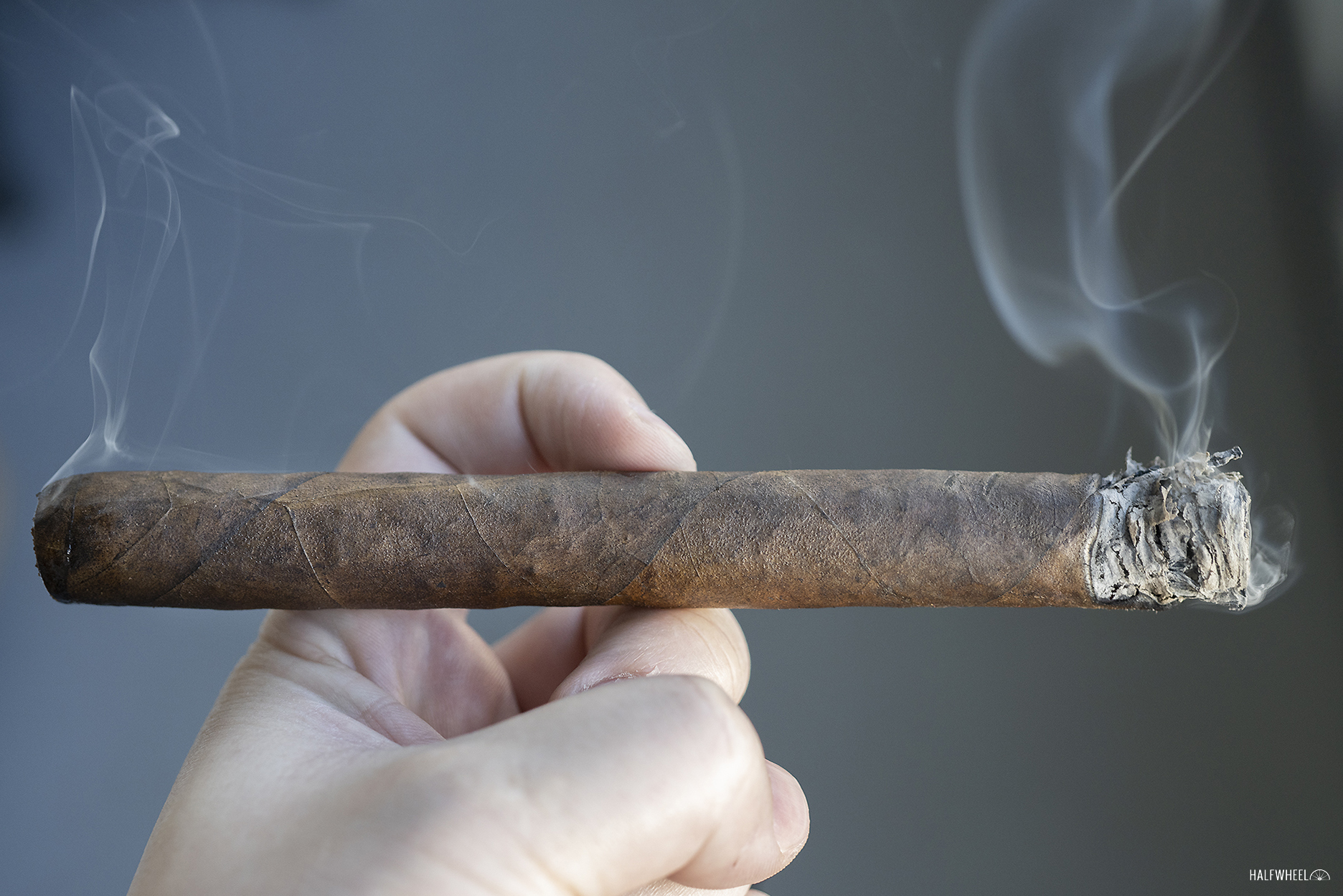 If asked to rank my favorite line from Crowned Heads to date, the Le Carême might well be my favorite. It really depends on whether it is fair to consider the Las Calaveras, an annual limited edition release that has contained a variety of different blends that share the same basic branding theme, though not the same tobaccos.

But as far as regular production lines, I’ve enjoyed the Le Carême—particularly the Belicoso Fino size—as much as any Crowned Heads release save for the original Las Calaveras. It’s named after Marie Antoine Carême, a pioneering French chef credited with popularizing the soufflé. Made at Tabacalera La Alianza S.A. in the Dominican Republic, Le Carême uses a Connecticut broadleaf wrapper over an Ecuadorian Sumatra binder and fillers from Nicaragua. Last year, Crowned Heads released a new cigar that is related to the Le Carême but isn’t the same cigar. Le Pâtissier translates to the baker from French. It’s a new 6 1/2 x 44 lonsdale that was released as an exclusive for retailers who attended the 2021 PCA Convention & Trade Show.

While it shares both food inspiration and the use of a l’accent circonflexe—that’s the technical term for the accent mark above the a that looks like an upward-pointing arrow—it’s notably not the same blend. It’s not even made in the same country. For Le Pâtissier, Crowned Heads turned to Tabacalera Pichardo in Estelí, Nicaragua and used a different blend: a Connecticut broadleaf wrapper over a binder from Jalapa, Nicaragua and fillers from Costa Rica, as well as the Ometepe and Pueblo Nuevo regions of Nicaragua. 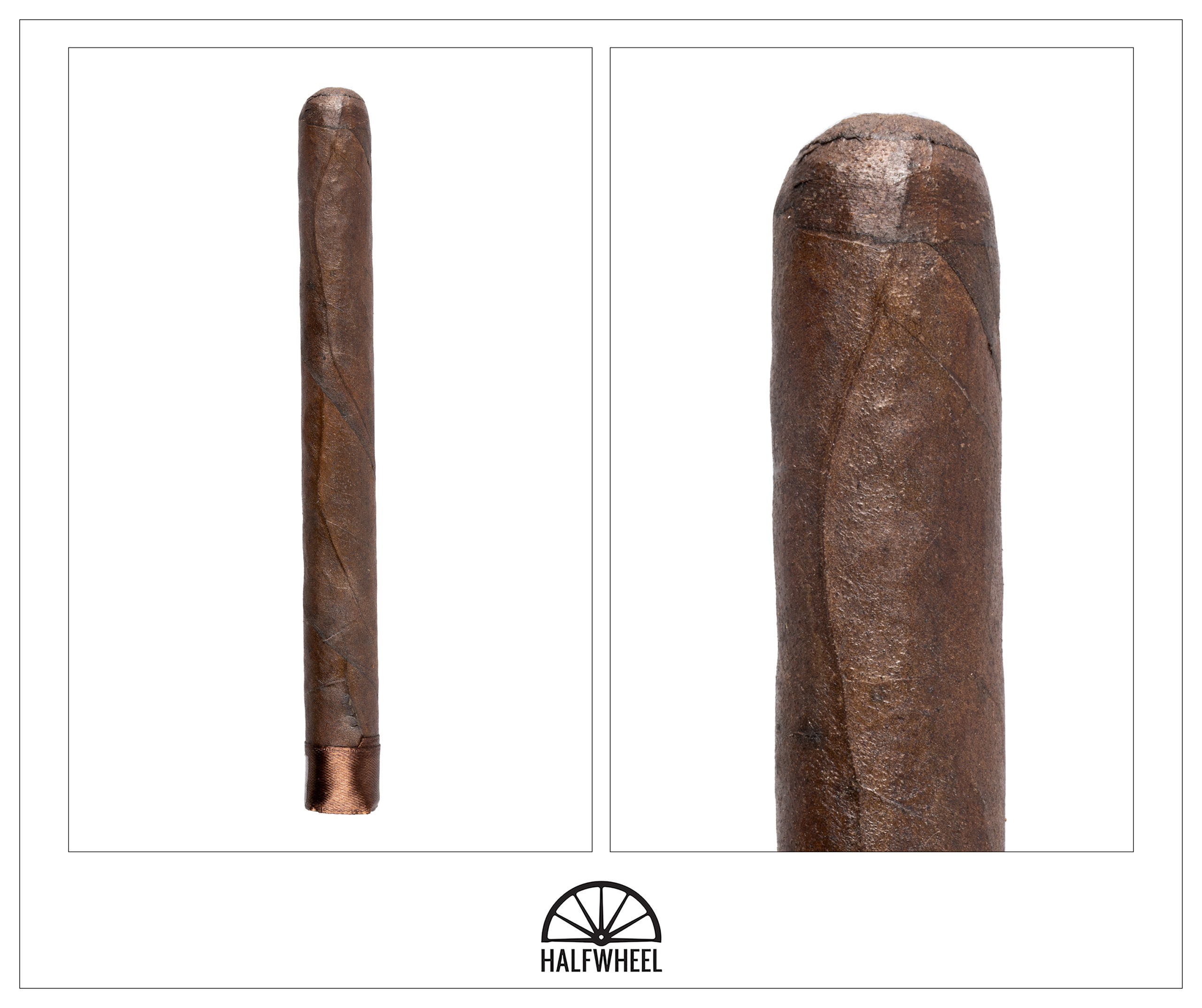 The very first thing I notice is the brown band, which is interesting. It sort of blends in with the wrapper, but is also just different enough to where the difference is obvious. Unfortunately, the second thing I notice is that the first sample really struggles to be removed from cellophane. And that’s an issue with the second and third cigars. It’s not tight enough that I need to get a knife to cut the cellophane, but it’s a lot snugger than 98 percent of cigars I smoke to the point where it requires a lot more force to remove it from cellophane. As far as the wrapper’s color, it’s pretty dark and the veins have some black colors around them, making it slightly easier to tell the difference between the veins and the seams. The color variation is noticeable, as are the veins and oils. Aroma from the wrapper has sweet manure and some hints of a roasted flavor, kind of like fire-cured tobacco. The foot is medium with even more of that fire-cured sweetness—something I’d guess is the Ometepe tobacco—along with some sweet ketchup, sweet tea and a weird smell that almost reminds me of the smell of masking tape. Cold draws are a bit tight, though in a manner where it seems like there’s a small blockage somewhere in the cigar as opposed to being consistently bunched too tight. Flavor-wise, I pick up red pepper, sweet chocolate, some eucalyptus and some of that artificial masking tape-like flavor, though, on one sample that flavor seems to be closer to a dry peat flavor. After three cigars, I’m still not sure what that flavor is, but it is quite unique and I don’t find it to be terribly off-putting even if it’s quite odd for a cigar.

After taking longer than normal to get the cigar lit, I’m pretty convinced I know what’s wrong before even taking the first puff of the Le Pâtissier. As has been the case with my reviews of late due to a number of reasons—the last one seemed to be caused by an open draw—the Le Pâtissier starts with a lot less smoke heading to my mouth than I’d like. Flavor-wise, there’s earthiness, a bit of cedar and some toastiness. After smoking half an inch of the first cigar, my suspicions that this cigar was over humidified at some point are all but confirmed as I find myself needing to more or less relight the entire cigar because of poor smoke production. The flavor profile settles on a mixture of charred earth and creaminess over white pepper and cedar. It finishes with more mineral-like flavors adding to the profile along with toastiness, red pepper and black pepper—everything just tastes a bit charred. Most of the time I can’t get enough smoke to perform a proper and isolated retrohale, but when I can there’s a short-lived nuttiness and bread flavors that mixes with white pepper and sweetness. The finish basically just moves some of the charred flavors into my nostrils, toastiness over burnt earthiness and black pepper. Flavor is medium-full, body is medium-full. Smoke production is incredibly poor, causing me to puff on the cigar a lot quicker than I normally would. That being said, my increased efforts don’t seem to make a difference in how quickly the burn line is moving, though the pace is keeping the ring around the cigar quite red. For all that is unpleasant with the construction, I will say the ash formation is even and consistent.

For the most part, the second third of the Le Pâtissier is more of the same. From both physical and taste standpoints, this cigar is hitting all of the marks of a cigar that has been over humidified. And that doesn’t change in the second third. The smoke production remains quite low, the puff rate required to keep the cigar lit remains incredibly high and the flavor is quite charred. It’s not great, but it’s not identical to the first third. Beyond the layers of burnt flavors, mineral flavors and pepper, there’s some honey sweetness and creaminess emerging. The new flavors aren’t enough to change my overall opinion of the profile, but it is one of the few differences between the first and second thirds. Elsewhere, it’s tough for me to find any differences with what the cigar is providing me. The finish remains made up of lots of charred earth and black pepper. The chances to retrohale the smoke are fleeting due to the smoke production and when I do, it’s not like I’m rewarded with pleasantness for my efforts. It’s more of the charred earth, toastiness and pepper flavors and I think that speaks a lot to how the second third is going. While the cigar hasn’t changed much, my palate is in a different place compared to the first third. It’s a bit more adjusted to handle the charred flavors, even if that’s not what I want. Flavor is medium-full, body is medium-full and strength is medium. Construction remains a struggle with touch-ups needed to help the smoke production. 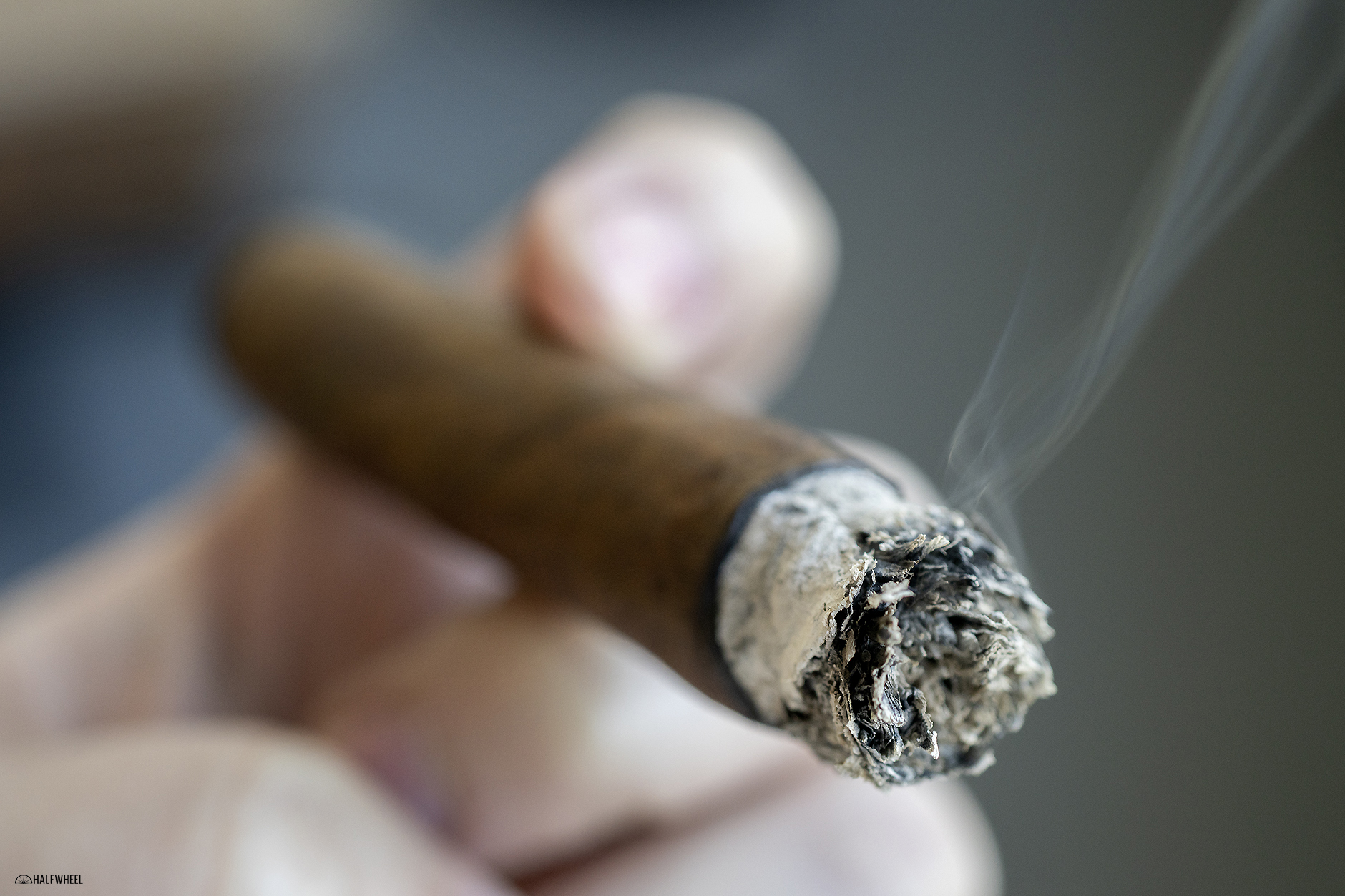 While the second third didn’t provide much in the way of changes, I’m pleasantly surprised to report that for about 15 minutes, the final third does have some noticeable changes. That honey-like sweetness from the second third begins to pick up the intensity and turns a bit before settling on a unique flavor that reminds me more of caramel than honey. It helps to not only bring up the monotony that was the first two thirds, but also provides a great contrast to the otherwise not sweet profile. It’s not enough to overwhelm the charred earthiness or toastiness, but it’s enough to make a dramatic difference. It also seems to help in allowing flavors like cedar and white pepper to help emerge from the fray. Unfortunately, the finish is even drier and harsher than before thanks to an uptick in charred earthiness and red pepper. Retrohales have a distinct burnt meat flavor along with oak and some saltiness. It’s still a bit harsh, but compared to the previous parts of the cigar, I’ll take it. The finish of the retrohales has herbs with cedar and a mild pepper. Flavor and body remain medium-full while strength picks up to medium-full in the final third. Construction is slightly better than before as the smoke production seems a bit better. That being said, touch-ups remain a part of the smoking process. 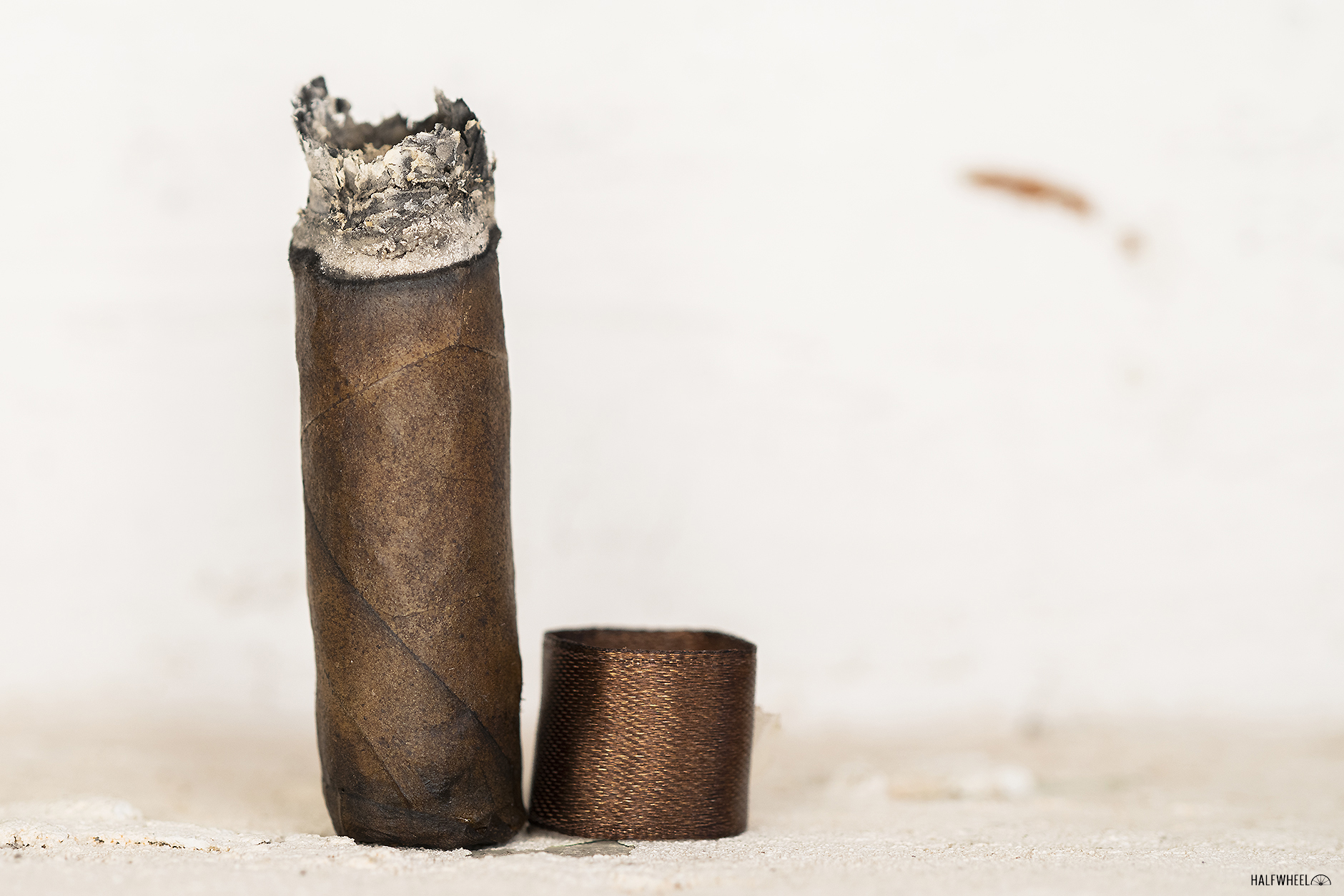 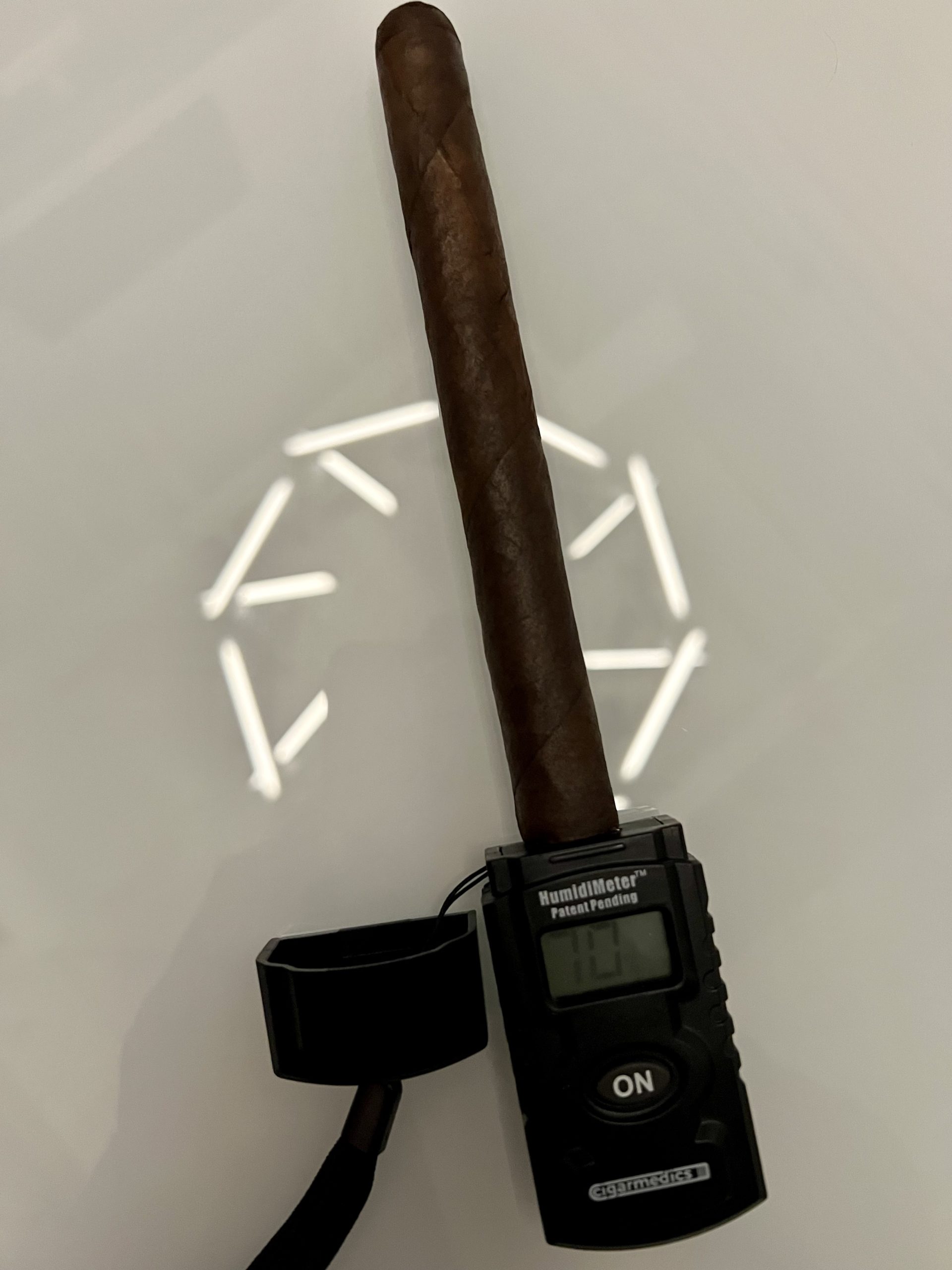 If there’s one legacy of halfwheel, I hope it’s that we proved that you can honestly talk about cigars and the cigar industry. Honesty is the best policy, even if it’s not always the most pleasant one. That’s the case with the three Le Pâtissiers I smoked, each showing plenty of signs of over humidification and each cigar being generally unpleasant. The takeaway here is neither that the Le Pâtissier is a bad cigar, nor that all Le Pâtissiers are over humidified. Quite simply, the only takeaway is that this cigar—when, seemingly, over humidified—is not a good cigar. Given how much I enjoyed this cigar’s predecessor, I look forward to buying some additional cigars and hopefully getting to smoke one without concerns of whether there’s too much moisture in the cigar.