If you’ve had a hard time keeping track of all the lines in the Crowned Heads portfolio, don’t be too hard on yourself. The company has released several since its inception, and the only thing they seem to have in common is that they avoid the use of the phrase Crowned Heads.

Which is why when I was assigned to review the latest Le Carême release, it took me a few moments to remember that this was part of the Crowned Heads catalog.

The line debuted at the 2016 IPCPR Convention & Trade Show, with its name coming from the famed French chef Marie-Antoine Carême (1784-1833) and who was known for his accomplishments in grande cuisine, or the high art of French cooking. According to his Wikipedia page, he was considered one of the world’s first internationally renowned celebrity chefs. Among his list of accomplishments was the establishing of mother sauces, prolific documentation of French cuisine, and popularizing the soufflé.

The Le Carême line debuted in four trunk-pressed sizes, all offered in 24-count boxes, and this past March, Crowned Heads released the fifth member to its Le Carême line, the Belicosos Finos 2018 LE.

“Last year, Miguel Schoedel, Crowned Heads national sales manager, presented the concept to us,” said Jon Huber, Crowned Heads co-founder, in a press release. “The Bolívar Belicosos Finos has always been one of my ‘desert-island’ cigars, so we began to work on the project with Ernesto Perez-Carrillo Jr., and the end result was very impressive. The vitola in the Le Carême blend added a whole next-level dimension of richness and flavor to an already exquisite blend.”

It keeps the same blend as the original line, with a Connecticut broadleaf wrapper over an Ecuadorian Sumatra binder and Nicaraguan fillers. However, instead of being trunk-pressed like the other sizes, this is left round, just like the cigar from which it gets its vitola inspiration. Like the rest of the line, it is made at E.P. Carrillo’s Tabacalera La Alianza S.A. in the Dominican Republic. 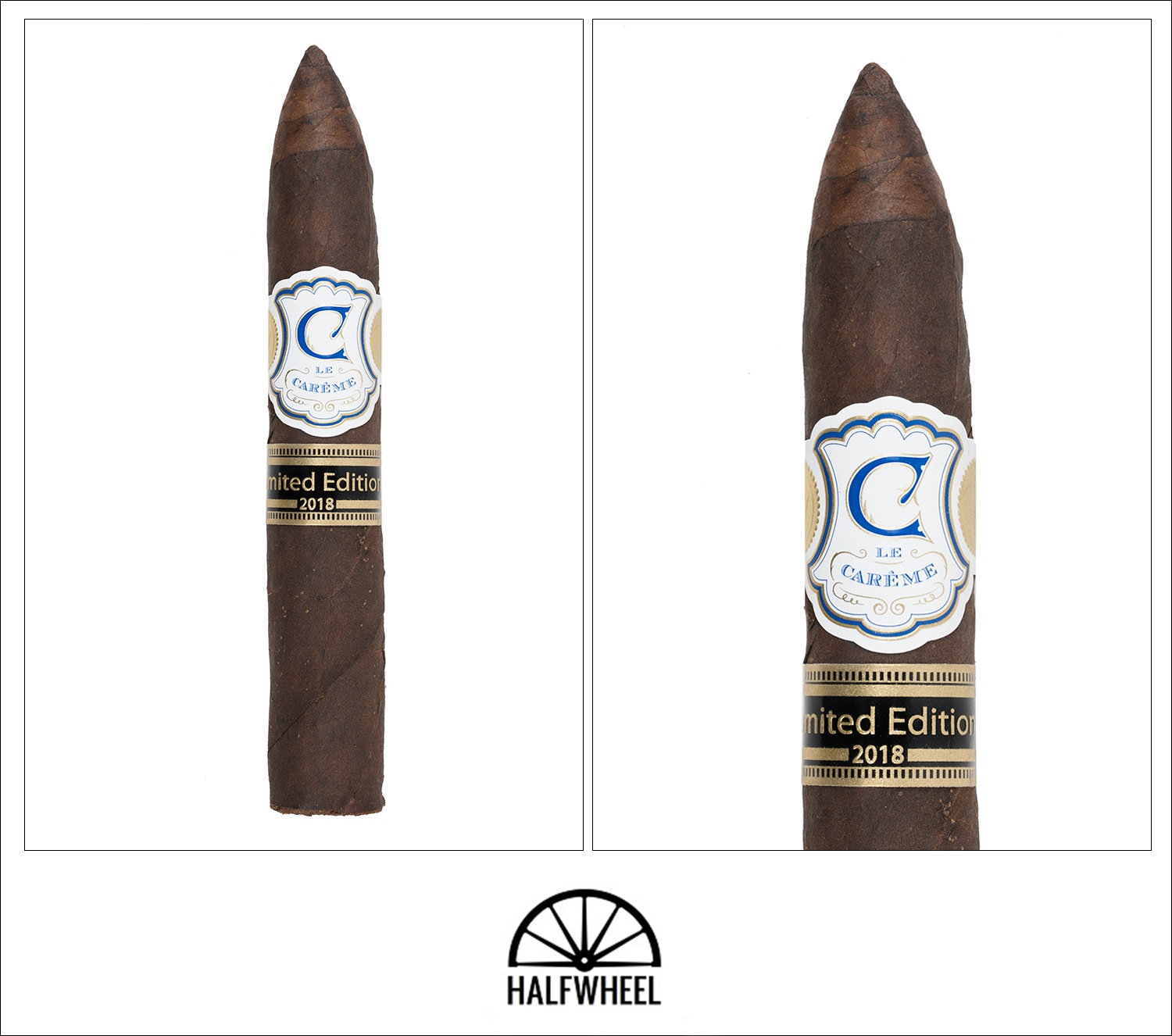 The shape of the Le Carême Belicosos Finos 2018 LE is certainly a standout; the elongated, pointed head is said to be based off the Cuban Bolívar Belicosos Finos, though from memory and a quick Google Images search, this appears a bit more pronounced in both length and point. This cigar also feels shorter, though that might just be an indicator that I need to smoke more BBFs as they are in fact the same length and ring gauge. The cigar is covered in an incredibly toothy, dark brown wrapper, with the little bumps making for a very fine grit texture on the fingers. Veins are sparse, almost non-existent, which not only smooths out the appearance but gives the tooth more of a stage on which to shine. There isn’t much in the way of oils on the leaf, which leaves the color softly matted. There’s also a bit of give to the cigar as well, far from soft, but even farther away from some of the rock hard cigars I seem to have been smoking lately. The foot on the first sample is remarkably nondescript at first sniff, not even offering a generic tobacco note. I’m able to find some creaminess, a bit of cotton, some sweetness, and a bit of cured meats after several more smells across the three samples, but they are all quite mild. The cold draw has just the right amount of firmness and repeats the cured meat note just enough to be detectable, while a bit of spice providing some front of mouth tingle.

The Le Carême Belicosos Finos 2018 LE starts out on the milder side of medium, with creaminess a consistent player across the three samples and cotton candy sweetness making the occasional appearance. My first retrohale has a bit of pepper to it, but even it is well on the mild side, assuming you don’t overdo it and stack several back to back. Before the burn line reaches the one-inch mark I get a bit of cocoa powder, marshmallow and other candy sweetness along with an after-dinner mint flavor that is enjoyable if a bit processed. Yet with all that, the cigar doesn’t taste outright sweet; if anything, the creaminess keeps things away from that notion. It’s now a bit milder than it started, and while the name of the cigar doesn’t mean cream, that’s what the cigar has me thinking about as the first clump of ash drops. Pepper is very mild and manageable, and while the draw has been a touch tight, it’s nothing I’m willing to complain about. 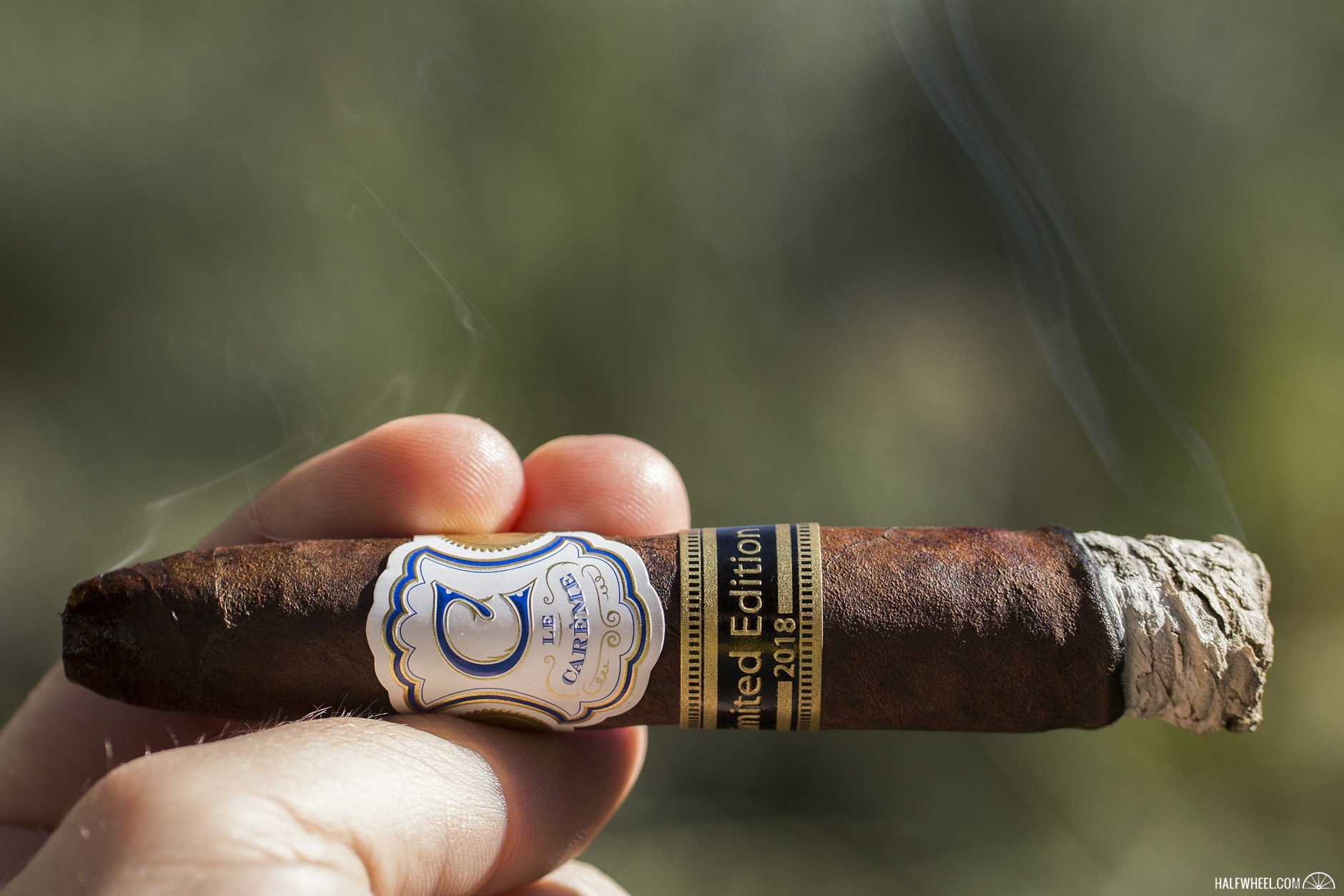 The second third of the Le Carême Belicosos Finos 2018 LE doesn’t bring on many changes, holding steady with the creamy core but picking up a slightly woody finish that is accented by just a pinch of nutmeg. That evolution continues in gradual steps, and the cigar undergoes a gradual shedding of most of its sweetness, revealing a bit of a rocky profile that leans towards coffee at times. It’s also a bit earthier through the nose than it has been, though pepper is still minimal which leaves the complex aroma of the smoke to process. By the final puffs of the second third, the creaminess has faded just enough to give the nutty profile that has been developing equal billing on the profile. There’s still barely any pepper to be found, which has me pegging the strength at medium-minus, while the body is still in medium territory. 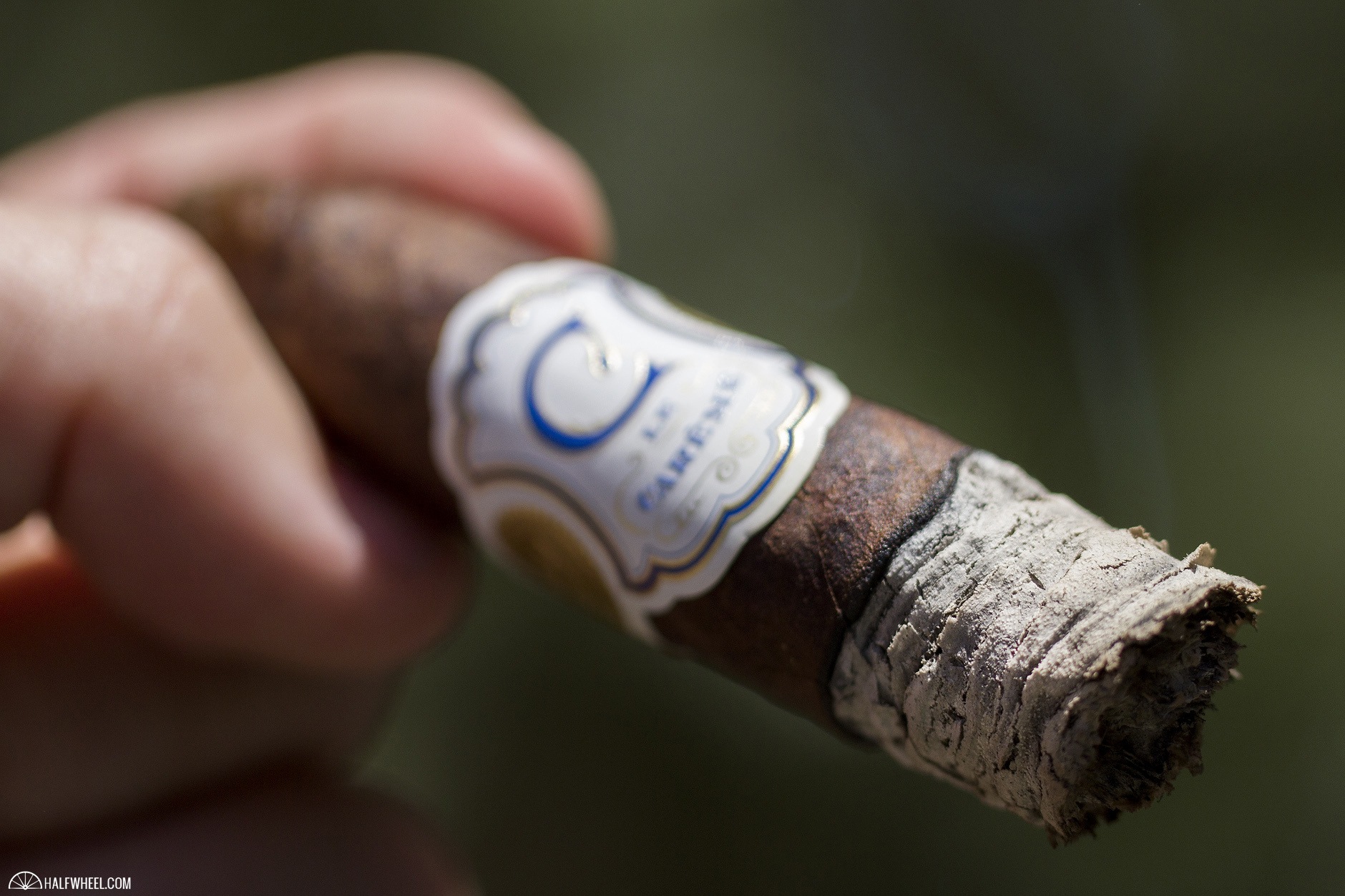 It’s just a few puffs into the final third that the transition out of creaminess and into nuttiness seems to be complete, and while I’m generally always a fan of the smoothness and sweetness that come with creaminess, I’m also not complaining about the current profile. Unlike a woodier profile, this doesn’t have as pronounced of a drying effect on the mouth, and if anything flirts with notes of cappuccino. I begin to get just a touch of pink salt in the final inches, and while it doesn’t have the same bite as table salt, it does contribute to the profile. The flavor gets a bit warmer in the final inches, and there is some warm chocolate beginning to emerge. The cigar doesn’t ramp up in flavor or strength, riding the cruise controlled medium level that it has been on into the final puffs. 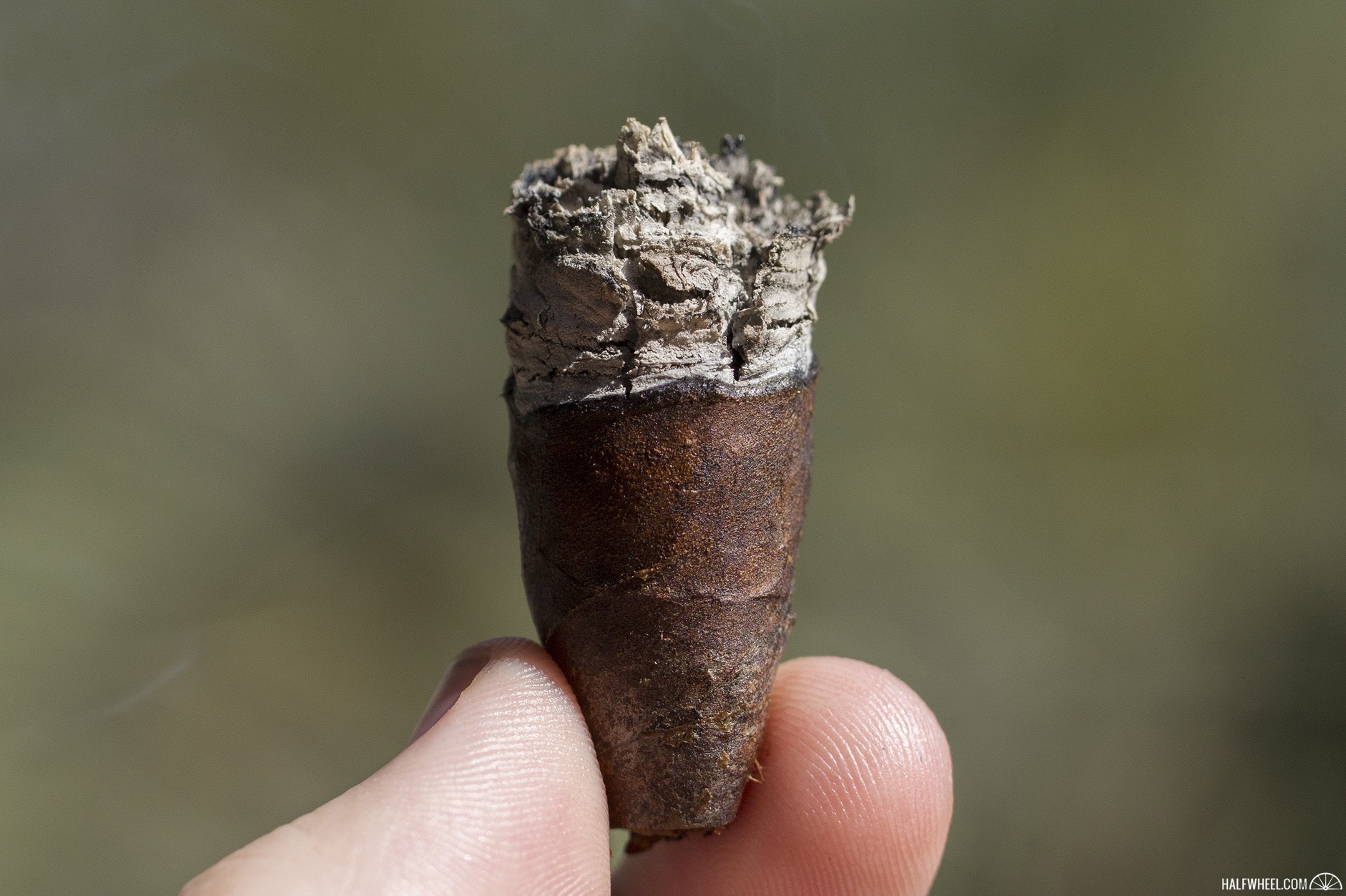 Circling back to my opening line of this review, I now wish that the Le Carême hadn't fallen off my radar, as this is quite a good blend. It's much more delicate and nuanced than I expected, though never lacks in flavor, with complexity keeping up at seemingly every turn. While the comparison to a chocolate soufflé may be a bit of an overstatement, there are certainly times when the cigar echoes the dish, yet never becomes so egregious in its attempts to deliver the flavor that it tastes overly sweet or forced. While there certainly aren't enough of the Belicosos Finos to go around, it's a good reminder to revisit this blend again before long.