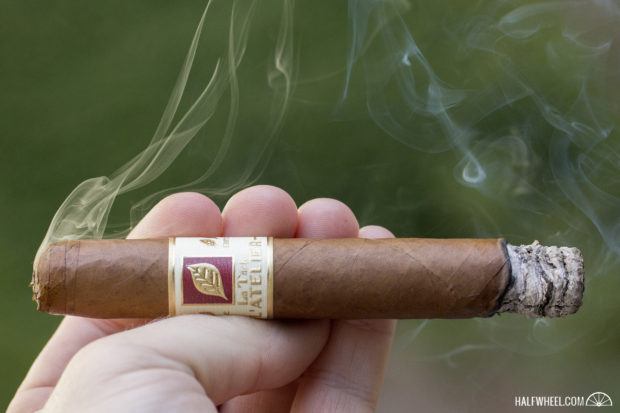 At the 2014 IPCPR Convention & Trade Show, L’Atelier Imports made mention of a new cigar that would be coming out the following spring, Côte d’Or. They did it by featuring it on an illuminated panel of the booth, with little in the way of details other than that it would be a limited edition and it would be blended with pelo de oro tobacco. The company held to that tease, albeit a month later, when it shipped the L’Atelier Côte d’Or, a 7 x 47 soft-pressed Churchill priced at $16 per cigar or $160 for a box of 10, of which there were 2,100 produced.

L’Atelier didn’t wait long on introducing an encore, as in December the company announced that L’Atelier Côte d’Or La Tâche, a 5 1/2 x 50 robusto version of the Côte d’Or blend, would be arriving in early spring. It would still come in 10-count boxes and would share the same $16 price tag as its larger sibling, but only 2,000 boxes were produced and it would be round as opposed to receiving a press. 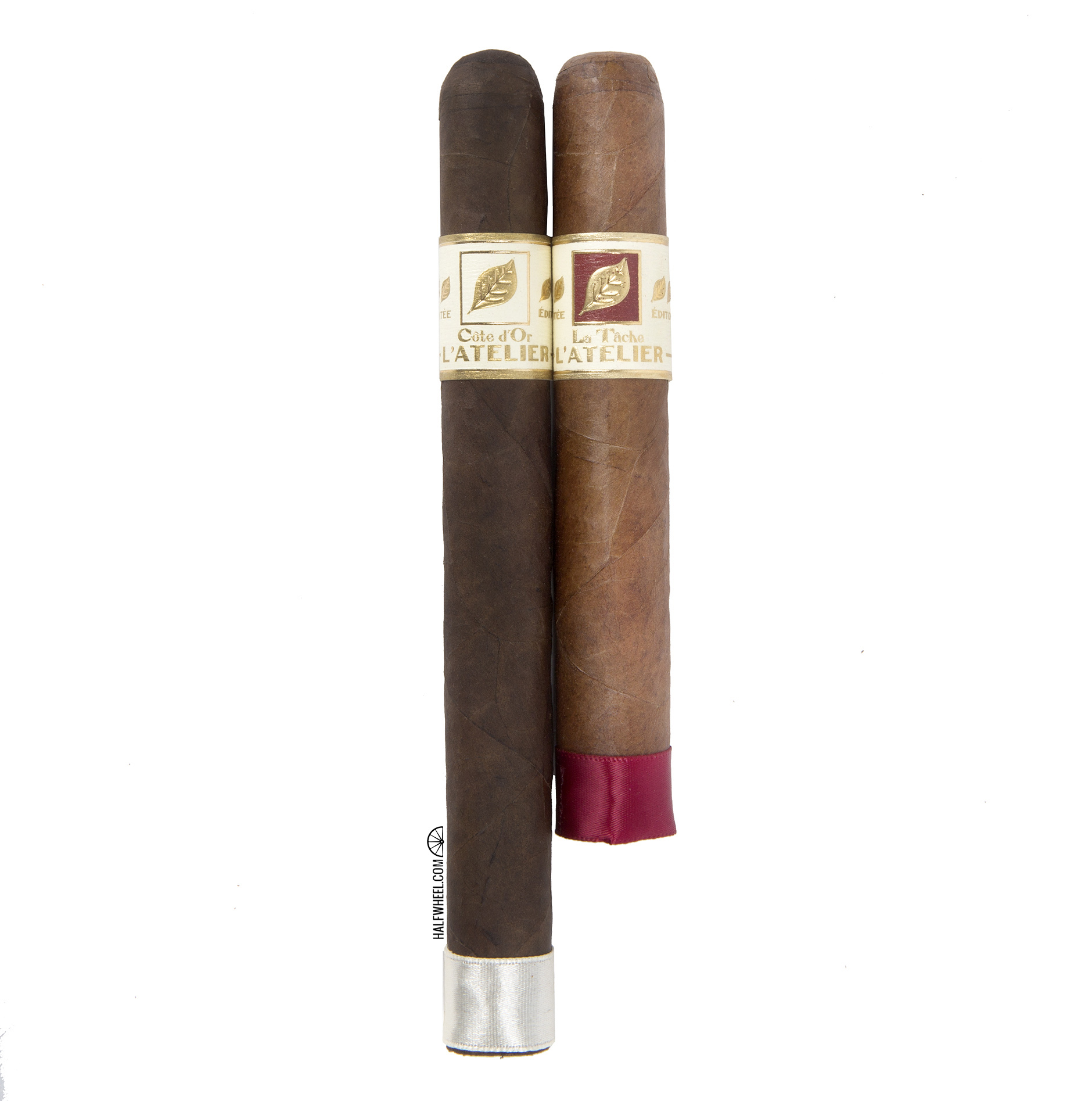 That blend is based around two notable tobaccos; the Ecuadorian Sancti Spiritus wrapper found on the L’Atelier Selection Spéciale, and Nicaraguan fillers that includes the famed pelo de oro tobacco. While the name means golden hair, the tobacco isn’t quite as eloquent to grow as its name might suggest, having been banned in Cuba due to its propensity to mold. It also produces a low yield of tobacco compared to other varieties, which can make some growers hesitant to attempt to produce it.

The cigar gets its name from the region in eastern France that is known for producing pinot noir grapes, which are also fairly challenging to produce, making for a match with the tobacco used in this cigar. 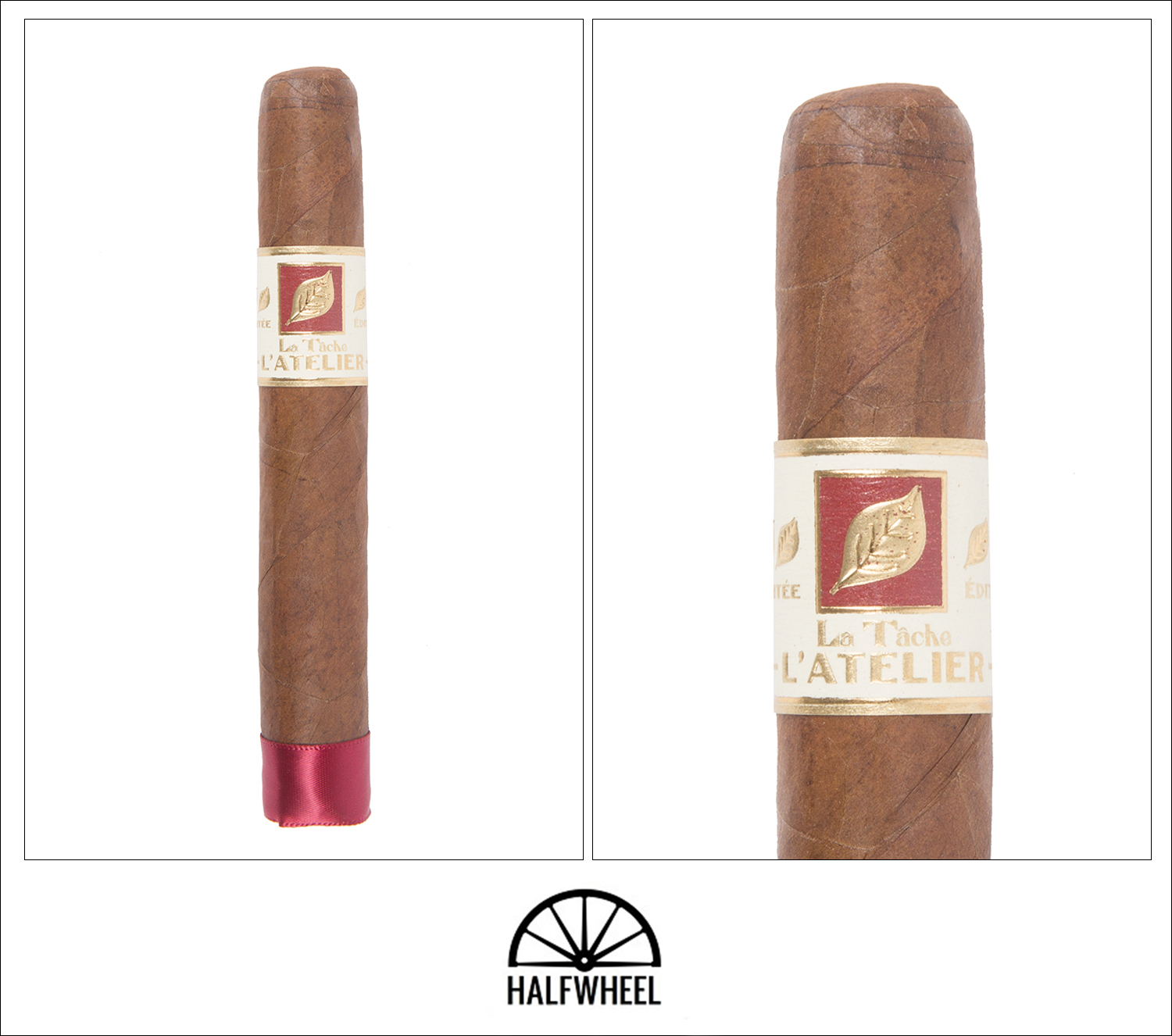 With its cream and gold main band and a fabric footband that falls between maroon and burgundy, the L’Atelier Côte d’Or La Tâche certainly has an elegant if not almost noble appearance, which is confirmed upon closer inspection of the old and cap. The wrapper leaf has a shade that reminds me of graham cracker, not particularly oily to the eye but with a bit of sheen for the fingers. Seams are flat and a few small veins pop up in spots. There’s a bit of give to the cigar, showing the kind of sponginess that I often come across with Cuban cigars. The foot offers a sumptuously sweet note that is part raisin, part cinnamon bun, with some wood shavings providing a drying framework. The cold draw is a touch loose, maybe even two touches loose in one sample, and delivers a crusty apple pie that is lacking in fruit, with just a hint of pepper in the background.

The L’Atelier Côte d’Or La Tâche opens with a complex blend of subtle sweetness and creaminess, along with just a touch of wood and a good amount of pepper, but far from excessive in its use. The smoke is plentiful and light in the mouth, while retrohales have almost as much salt as they do pepper, both wrapped in a very light smoke but able to provide a good bit of tingle. The flavor fills out a bit and gets more pepper laden as it makes its way towards the second third, with the ash’s breaking providing a visual cue to the transition. 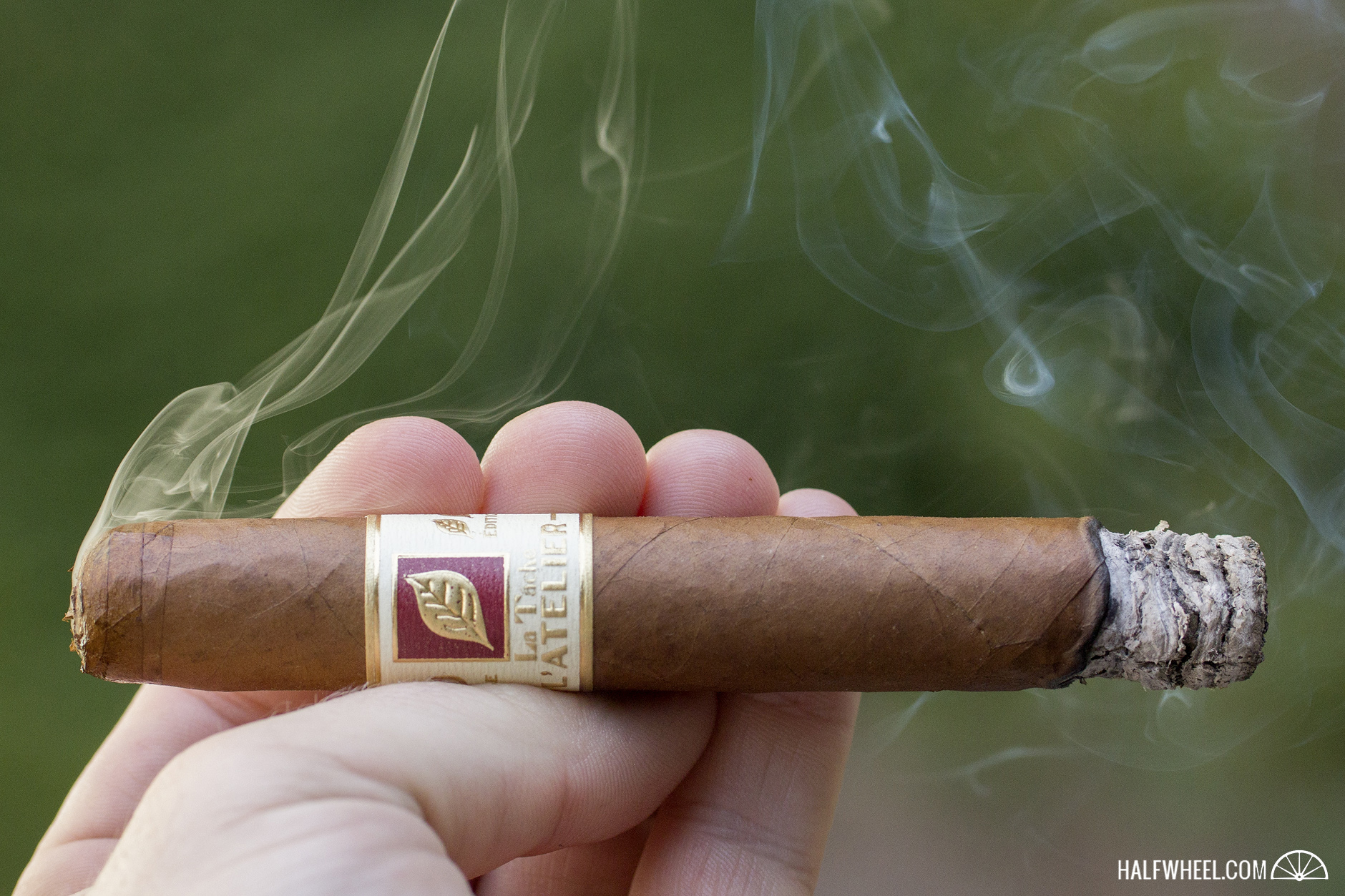 The second third kicks off by bringing in more pepper, a bit rough on the palate at times, though that’s partially attributable to how it has evolved since the first third. Retrohales show the change as well, with pepper about 85 percent of the makeup and table salt making up the rest. There is still a good bit of creaminess hanging around the L’Atelier Côte d’Or La Techie’s smoke as the burn line reaches the midway point, and the technical performance has been near flawless through this marker as well. It might just be the oatmeal color that the ash has before it turns more to a light gray, but I also get a bit of oatmeal and almond milk as the burn line moves past the midway point; it’s hearty without being heavy as the final third approaches. 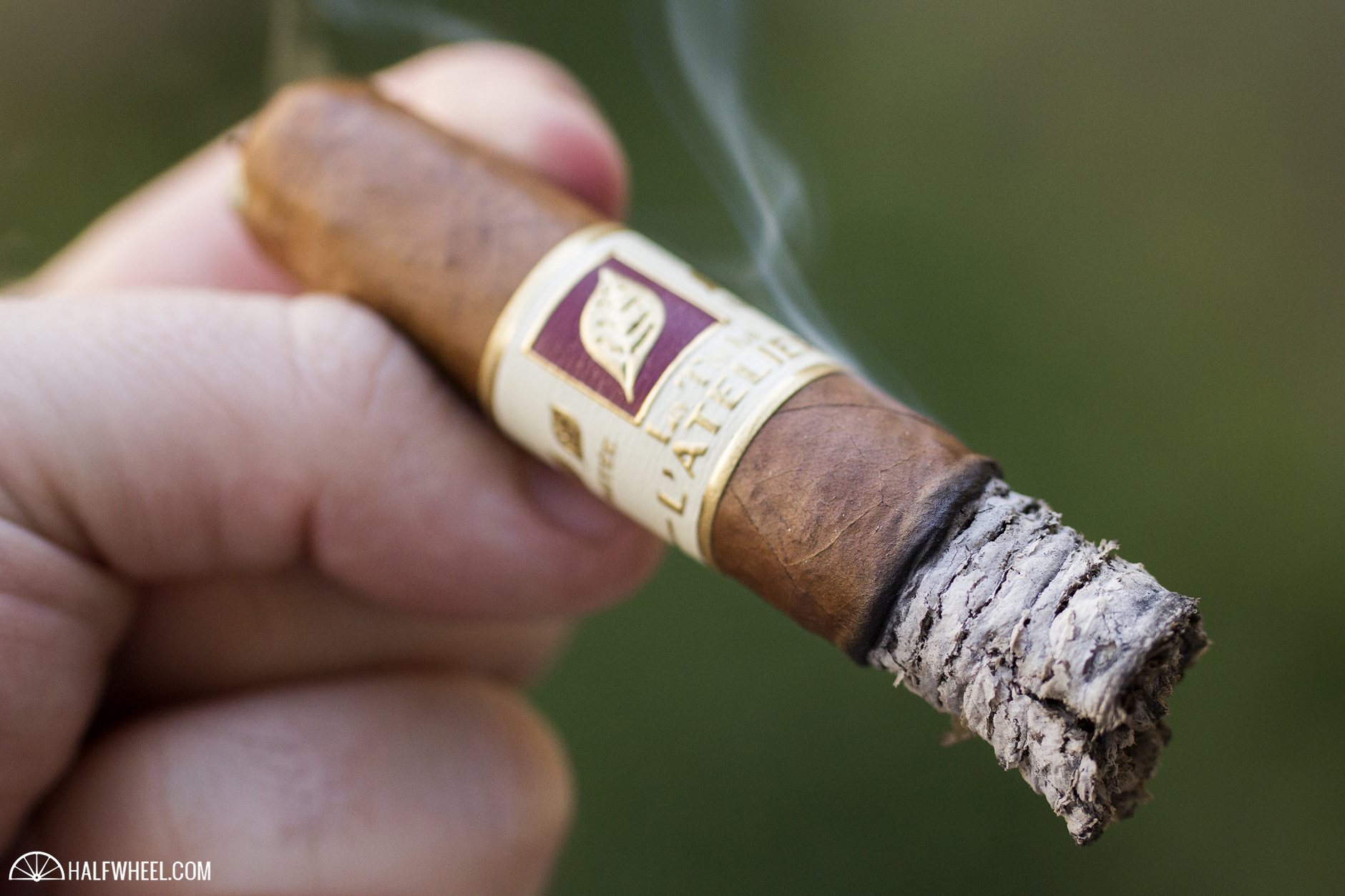 Starting the final third of the L’Atelier Côte d’Or La Tâche has me trying to remember where the cigar started as it is definitely not where the cigar is now in terms of flavor or strength. The progression has been tremendous, and the cigar has shed any sense of sweetness or creaminess in favor of a sharp pepper that picks up a mineral note from time to time and leaves quite a lingering finish on the palate. One thing that hasn’t changed is the texture and body of the smoke, which remains fairly light in the mouth and though the nose despite the evolving flavor characteristics. A bit of heat and increasing sharpness from the pepper brings the first cigar to a close with just about an inch left, while the second sample gets taken down to a finger-burning stub thanks to a cooler burning cigar. 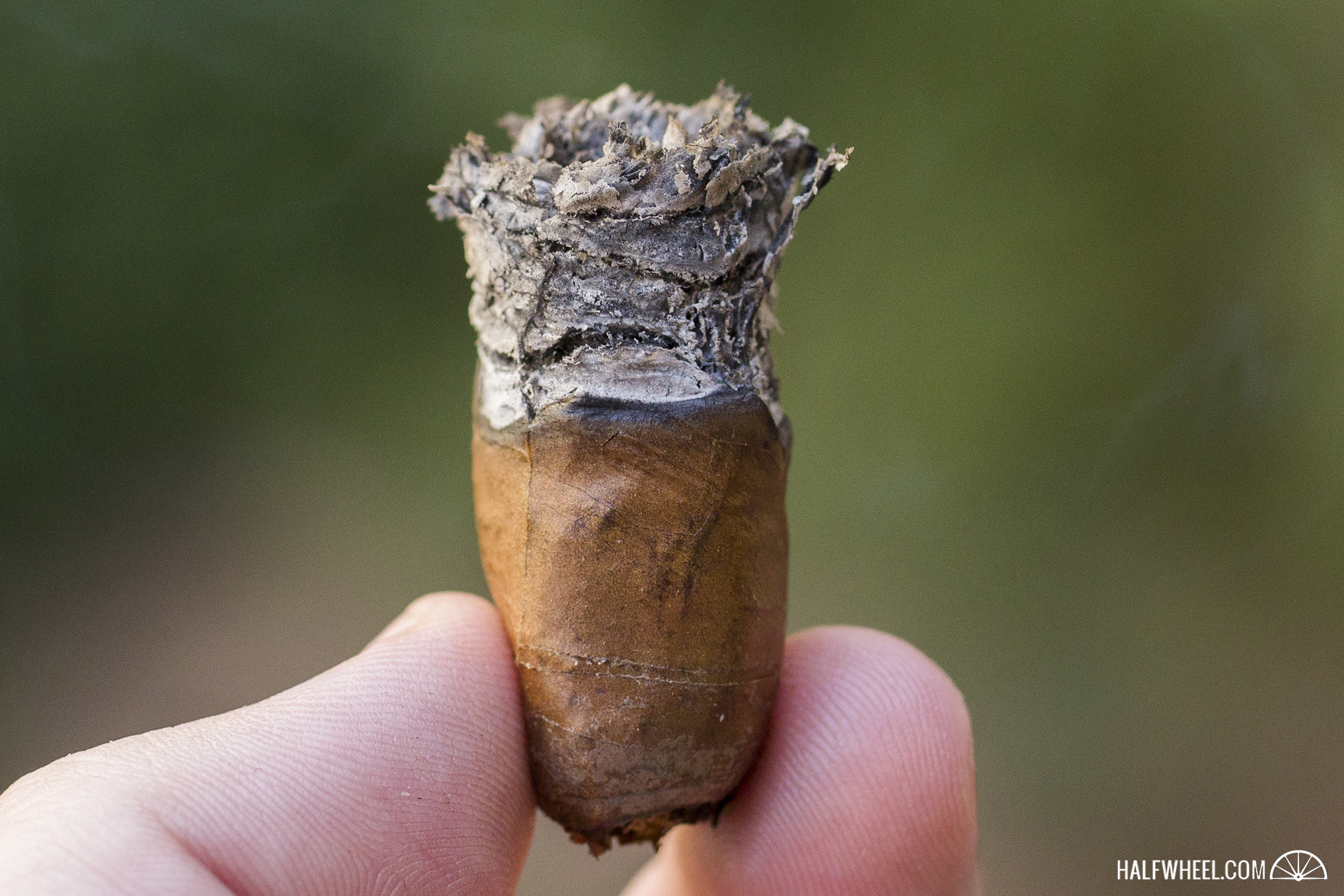 The L’Atelier Côte d’Or La Tâche looks like an elegant cigar and for the most part, smokes like one as well. The creaminess of the first third sets a beautiful framework for the cigar to build off of, and in the better of the two samples stays with the cigar from start to finish while still allowing the other notes to develop and emerge. It never gets heavy on the palate or overbearing with the pepper, yet never lacks in strength or flavor. The technical performance is near flawless, capping off an outstanding performance. It’s a finesse-oriented blend that deserves to be smoked by anyone who appreciates quality cigars.