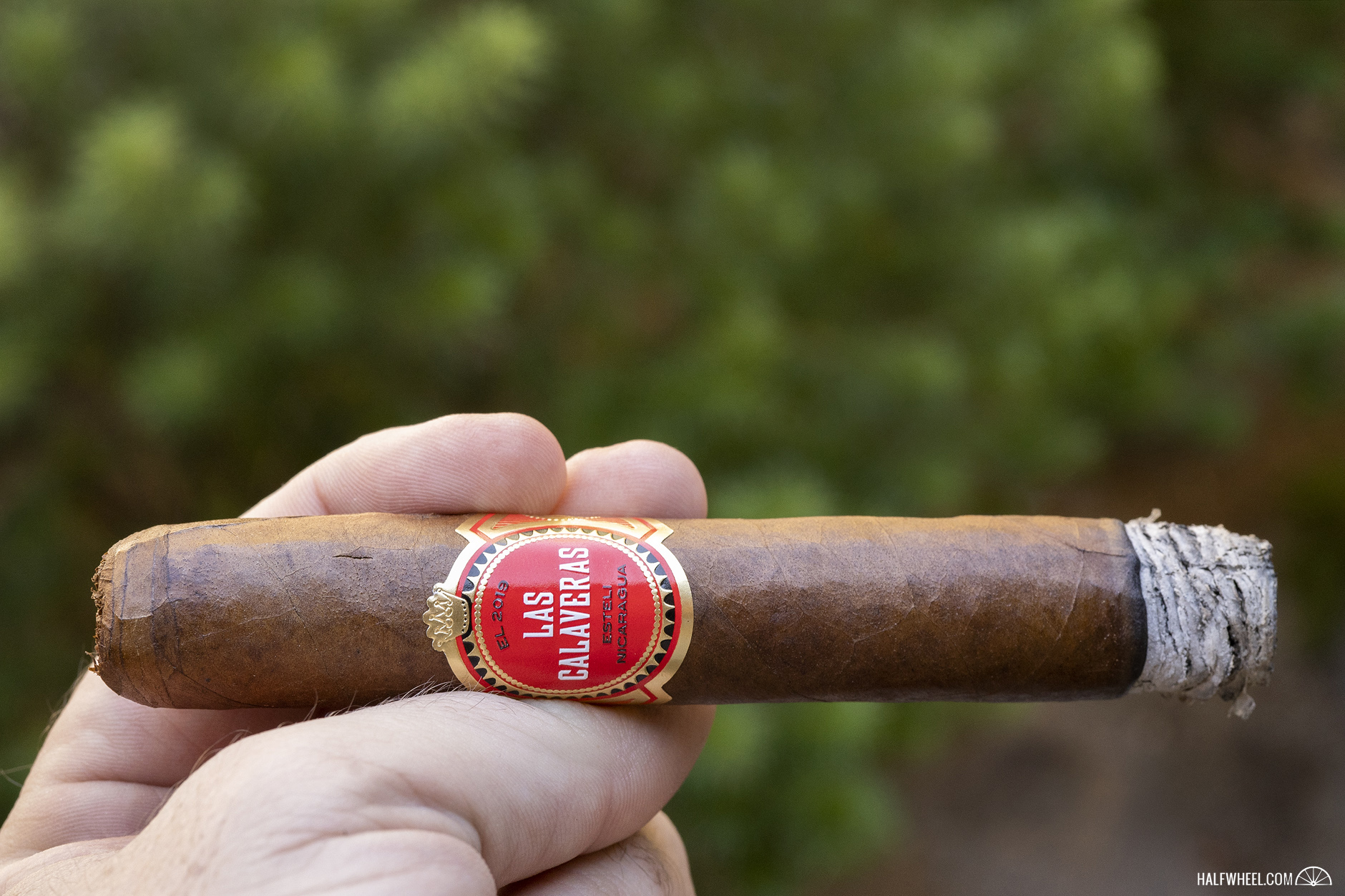 For the past six years, Crowned Heads has released Las Calaveras, a limited edition line that pays tribute to the people who have passed away in the past year, and the 2019 is certainly one of the most special ones to date.

That’s because the 2019 version pays tribute to Cano Ozgener, best known as the founder of CAO International, the former employer of both of Crowned Heads’ founders, Jon Huber and Mike Conder. Ozgener passed away in June 2018 and this year his initials get a special place on the primary band of the Las Calaveras EL 2019, included in a gold coin or seal design on either side of the central logo. There are a few things I notice about the Las Calaveras EL 2019 LC54 as I get ready to light it up, including the foot band—more on that later—as well as how it seems to not quite match with the main band, which seems to be sitting a bit lower than I would expect. As for the wrapper, it has a bit of oiliness to it along with a few fairly prominent veins, with a fairly smooth texture in the fingers. In the morning light it has a bit of a reddish, almost clay-like hue to it that I didn’t notice smoking it later in the day, and it makes the wrapper that much more visually appealing. The cigar feels firm at first but shows a bit of give when a light squeeze is applied. The seams are flat and the cigars look well constructed, though the head and cap on one looks a bit off center. The foot has an aroma that reminds me of sweet butter on an English crumpet or buttermilk biscuit, a familiar mix of creaminess and breads that gets me thinking of what I’ll have for my next breakfast. One sample has me thinking a bit of pancake batter, a related but distinct smell. There’s very little pepper to be found, appearing only after I explore the aroma further and find more complexity from the butter note. The cold draw is smooth, with the draw varying from a tick tight to a tick loose, but neither is concerning. There is a bit more of that butter stick and doughy roll flavor, though it doesn’t hit the flavor in the same sequence that the aroma did. One sample—the one with pancake batter for the nose—now as me thinking of apple fritters with just a bit of cinnamon.

Given how generally consistent the aroma and cold draw were prior to lighting the cigar, once burning the profile is nothing like what I experienced just moments ago. It’s medium-full with a base of dry woods that make me think of fence posts, black pepper and a bit of earth, with a funky twang that I just can’t place. It takes a second for the flavors to seemingly get arranged on my palate, but once they do the profile becomes fairly familiar as the Ecuadorian habano wrapper shuffles itself into the driver’s seat. There’s more black pepper to be found in the retrohale, and the profile sits at a balanced medium-full as it gets ready to begin its next section, and I begin to get a bit of plain beef stick on the finish, slightly acidic and tangy. The cigar has burned well so far, generating no complaints about how it smokes.

The second third of the Las Calaveras EL 2019 LC54 sees the cigar dial back some of its bigger notes but retaining much of the complexity it developed in the first third. The pepper is probably the one thing that I most notice as not being as strong, steadily dialing itself down until the midway point, and in the second sample, this results in a chalky flavor starting to emerge, which is drastically different than what I got from the first sample. As for the third, it’s there but not as strong, yet I still get enough to have it register as something that seems to be distracting from what would otherwise be a very enjoyable profile. In the first sample, the back half of the second third picks up notes of warmed, roasted nuts and there are a number of puffs where peanuts are the standout of that bunch. The second sample holds to that chalky note, and the third commingles the two more than I would like. The draw is still smooth and easy, with decent if not overwhelming amounts of smoke but a sharp and even burn line. It seems like wherever the Las Calaveras EL 2019 LC54 gets itself to at the midway point is the profile that it will carry not just into the final third but through most of it. The first sample seemed to be the purest in terms of flavor, though the Ecuadorian habano wrapper which found a good stride in the first third didn’t get back to that in the final third. The second was by far the one that was most off, failing to shake the chalky sourness, and I’m left to wonder if the cigar may still be a bit damp or I may just be smoking one where the tobacco is a bit off. It becomes cough-inducing with just over an inch to go, though it has finally shed the chalk. The third sample falls in the middle; smoother with less of whatever this flavor is that has been plaguing the cigar, leaving just enough space for the core flavors to come through but not enough to have me becoming endeared to the blend. It still smokes quite well, though that is far from enough to salvage things. 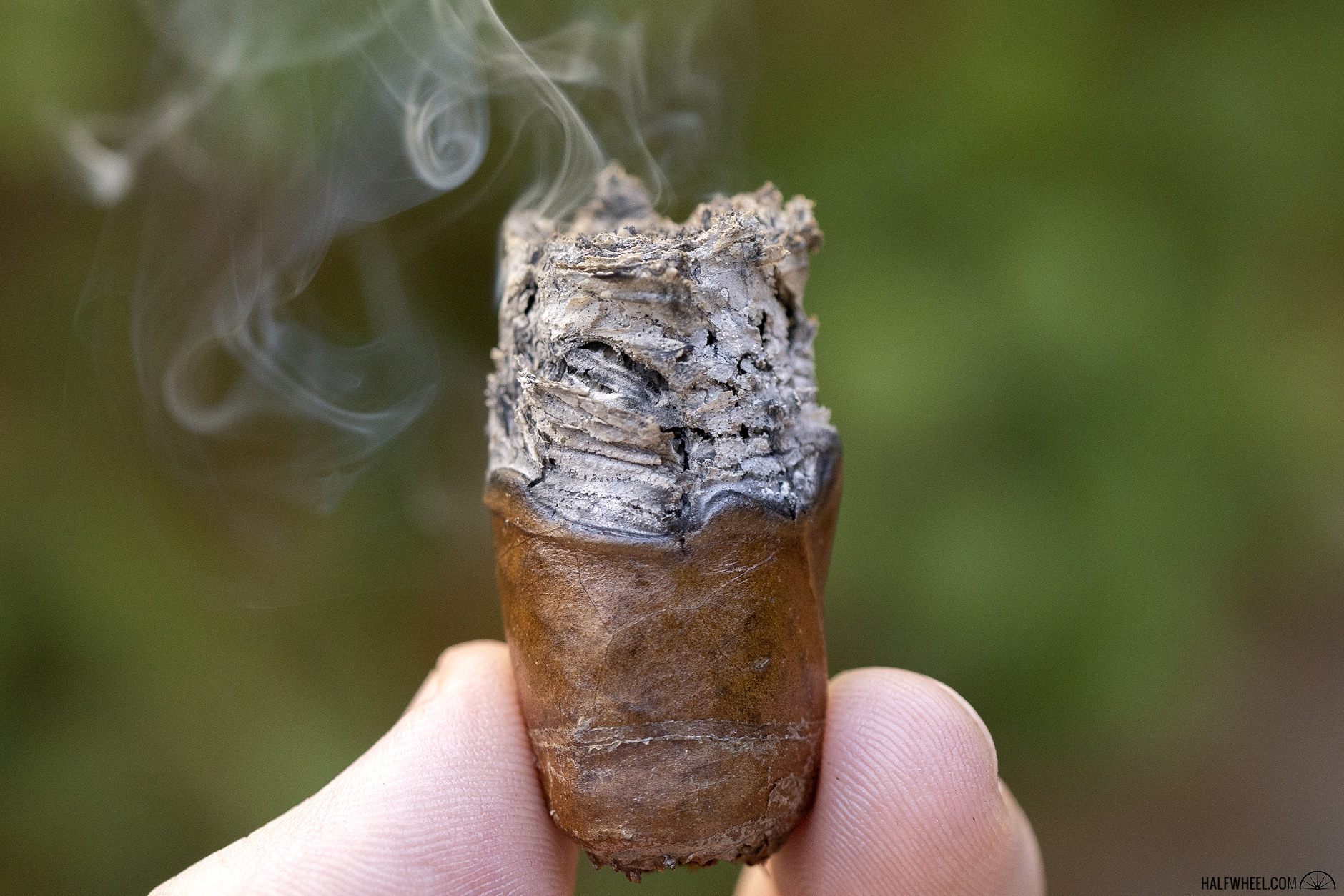 From an inspiration perspective, there is a lot to like about the Las Calaveras line; a simple way to celebrate the memory of those who have gone before us into whatever lies beyond our time on earth. While previous incarnations have ranged between good and great, something about the 2019 edition—at least the samples I smoked—was just off. Decent starts quickly get derailed by a pervasive chalky sourness that tends to stick around far too long than should be found in any premium cigar, and any saving graces from the technical performance get lost in the shuffle. I hope that I just got unlucky with these samples, but all I can judge this cigar is what I experienced, which leaves a lot to be desired and a hesitant recommendation to try it for yourself.