Rarely does a year go by when we don’t lose a friend, family member or other acquaintance to death. Different groups and cultures memorialize them in different ways, some with annual tributes to all those who have left this world in the past year.

In 2014, Crowned Heads launched a cigar designed to do that as well, Las Calaveras. The line, with a name that translates as the skulls, is designed to honor those who have passed away in the previous yea and to be a celebration of their lives, according to Jon Huber, Crowned Heads’ co-founder.

As was noted in a review of the LC550 vitola of the inaugural release, the company has stated the release was specifically inspired by La Calavera Catrina, a zinc etching by José Guadalupe Posada.

With each year’s annual limited release, the blend and presentation of Las Calaveras will be altered. What will remain the same, however, is the spirit behind the cigar. We hope that with this annual remembrance, we will choose to celebrate–rather than mourn–the lives of those who have so graciously shared their legacies with us.

The first installment of the Las Calaveras Edición Limitada was notable in the story of Crowned Heads not just because it was a new limited edition, but because it marked the first time that the brand would release a cigar made at a factory other than Ernesto Perez-Carrillo’s Tabacalera La Alianza. Las Calaveras would see Crowned Heads work with My Father Cigars S.A., the factory owned by the García family in Estelí, Nicaragua.

The line draws on imagery associated with the Día de los Muertos holiday in Mexican culture, which runs from October 31 to November 2 each year. One of the key images is that of the sugar skull, known as a calavera, a decorated representation of a human skull generally made from either sugar or clay that are placed on altars as offerings. Chocolate can be used as well, and are occasionally eaten following the celebration, which draws on traditions found in Aztec, Mayan and Toltec cultures. Each box of Las Calaveras features a sugar skull design on its lid. 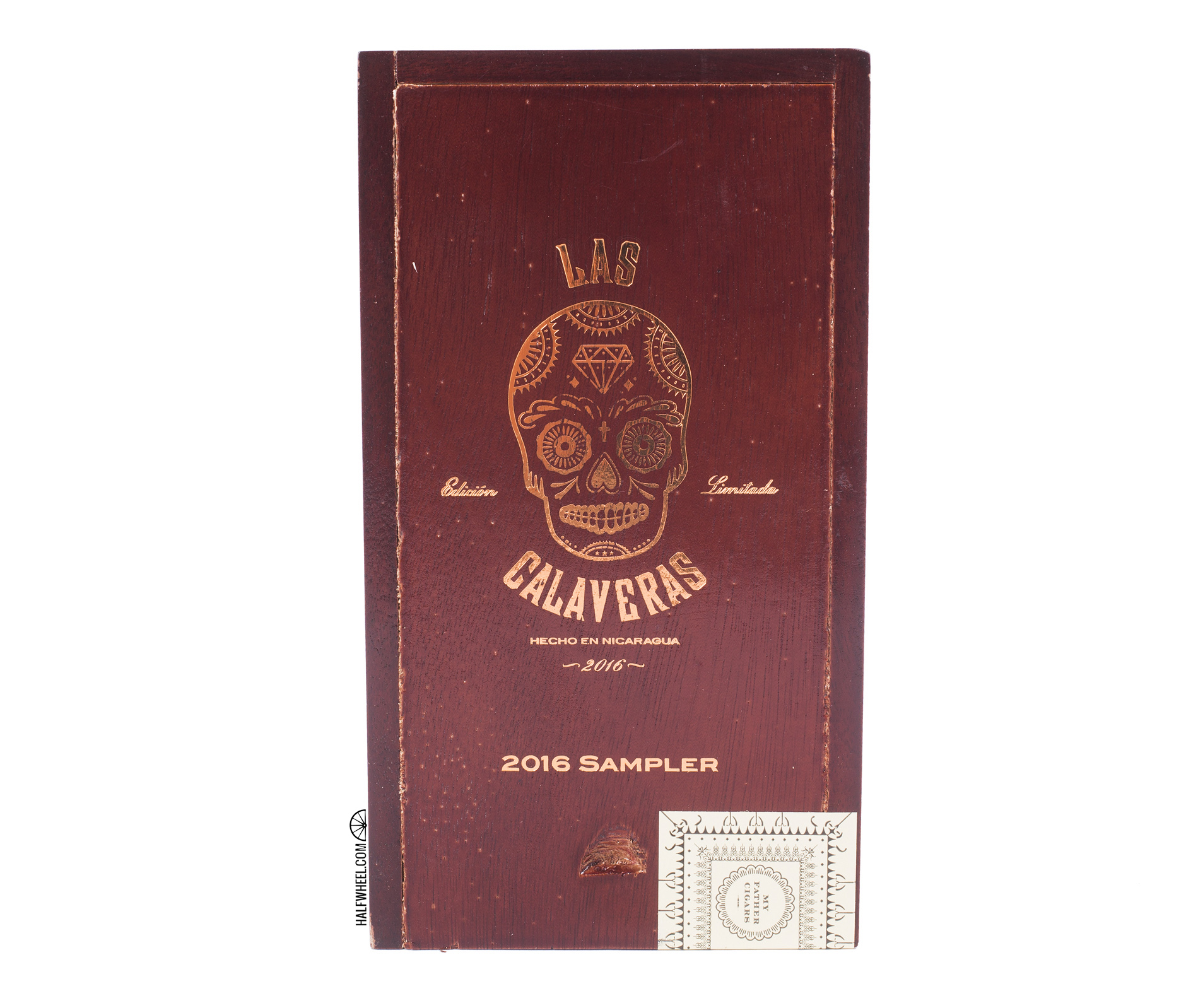 It’s also the biggest of the three releases in the series, with a total of 110,000 cigars being produced. In 2014, 72,000 cigars were made, using an Ecuadorian habano oscuro wrapper, while 90,000 were produced for the 2015 version, which used an Ecuadorian habano rosado wrapper. Both the previous installments used a Nicaraguan binder and fillers, as does this year’s version. 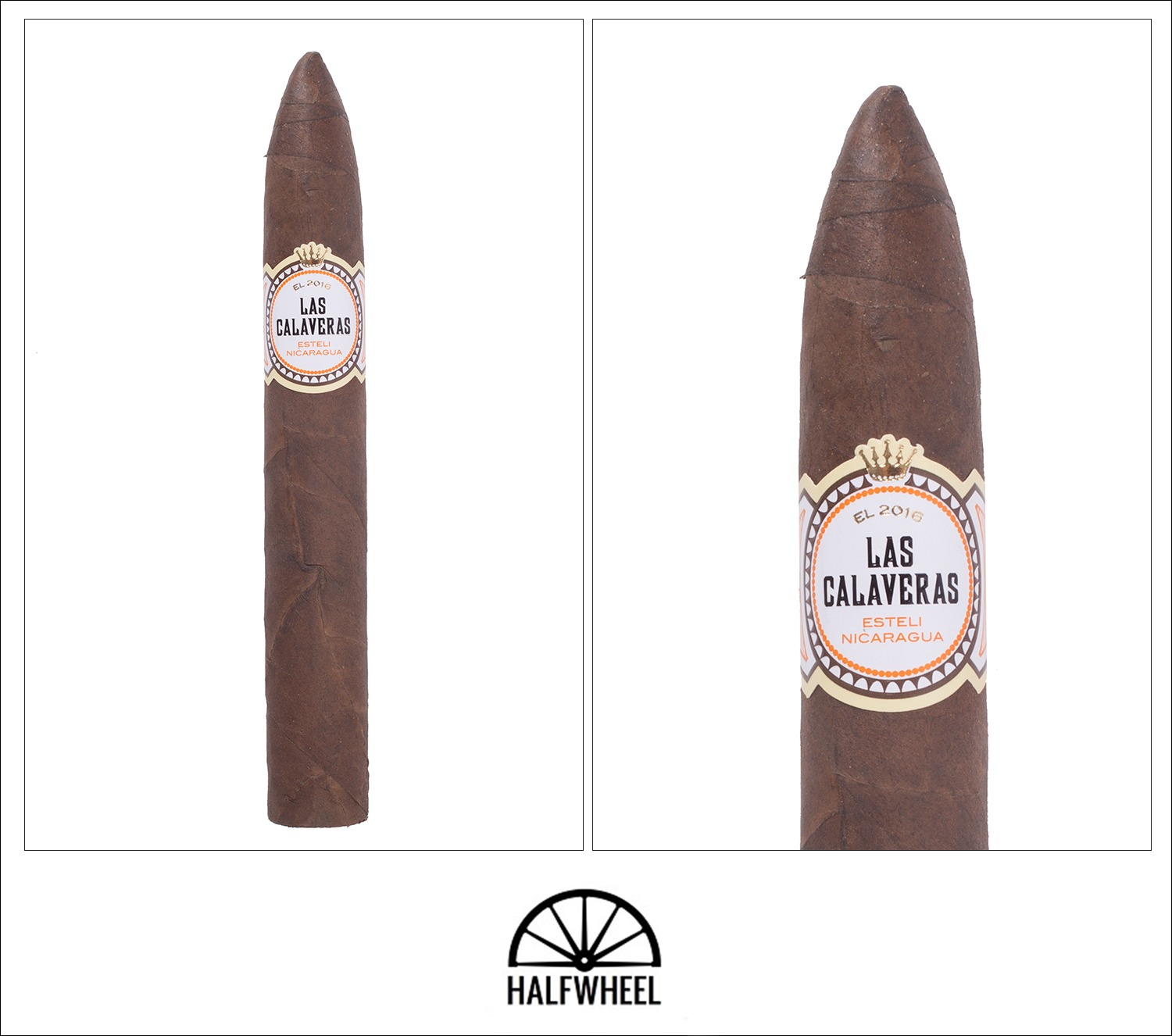 The Las Calaveras Edición Limitada 2016 Pirámide is almost monumental in shape, though not so much in size. The extended torpedo head gives the cigar an elongated visual and really cements the idea of it being a figurado. The wrapper is an earthy shade of brown, with some mottling and color variation, as well as some sizable veins that generally get hidden by the placement of the bands so they aren’t facing forward in the box, although they are front and center on one sample. There’s a slight bit of oiliness to the wrapper, as my fingers almost glide across the top leaf. It’s a well-rolled stick, uniformly firm but far from hard. The foot is pleasingly sweet, with notes of cherry and cranberry the first thing to cross my olfactory nerves, with a bit of nose-tingling pepper following closely behind and occasional appearances from cedar. The cold draw is on the open side; even with the tapered head air still flows quite freely through the cigar. It’s a bit less forthcoming with the flavors, though there is a tingle established by baking spices and a bit of pepper that elicits a tingle on the front of the tongue. It too can show a bit of wood and salt, depending on the sample, with one delivering a flour tortilla taste.

As soon as the foot of the Las Calaveras EL 2016 Pirámide gets toasted, a meaty, peppery smoke starts flowing through and off the cigar that can be a bit of a shock to the senses given how the cigar presented before being lit. Thankfully the intensity varies from sample to sample, as the cigar is much better when the pepper knob is turned down a bit and helps to allow notes of coffee and rough earth to come through and stay balanced. Despite being slightly loose on the cold draw, the cigar now burns and draws beautifully, with an even burn line and a tight, concrete gray ash. A few retrohales throughout the first third convey a bit of a different spin on the pepper, a bit punchier and almost youthfully rough, which overly sharpens the note. 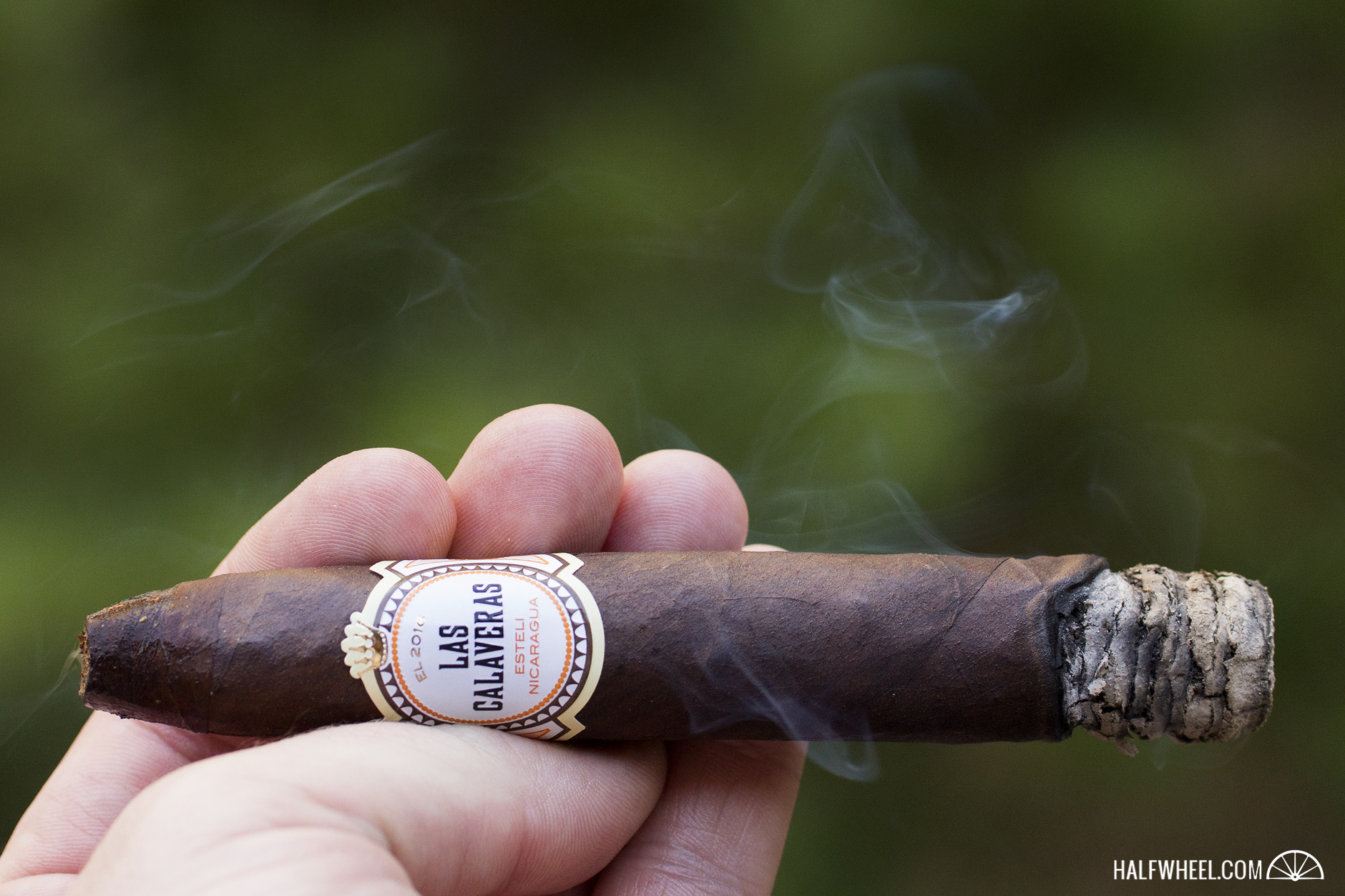 While the Las Calaveras EL 2016 offers plenty of flavor, the transitions are a bit lacking, and the start of the second third continues to suggest that the cigar needs more time to fully smooth out the flavors it is trying to convey. Through the midway point the pepper stays sharp in the throat, while the core flavor seems to be grasping for some weight but doesn’t quite find it. Past the midway point, however, the smoke fills out a bit, picking up a chalky tone and offering much more mouthfeel. The cigar doesn’t shake the lingering harshness in the throat, however, and even after letting the cigar rest for a minute or so I can still feel its effects. Retrohales haven’t let up in terms of their strength as the cigar moves to its final third; while the pepper in the throat is still on the harsh side, the nose gets a much cleaner version that packs quite a punch. The burn is still fantastic, with a generally very even burn line, plenty of smoke and an ash that holds on quite well. 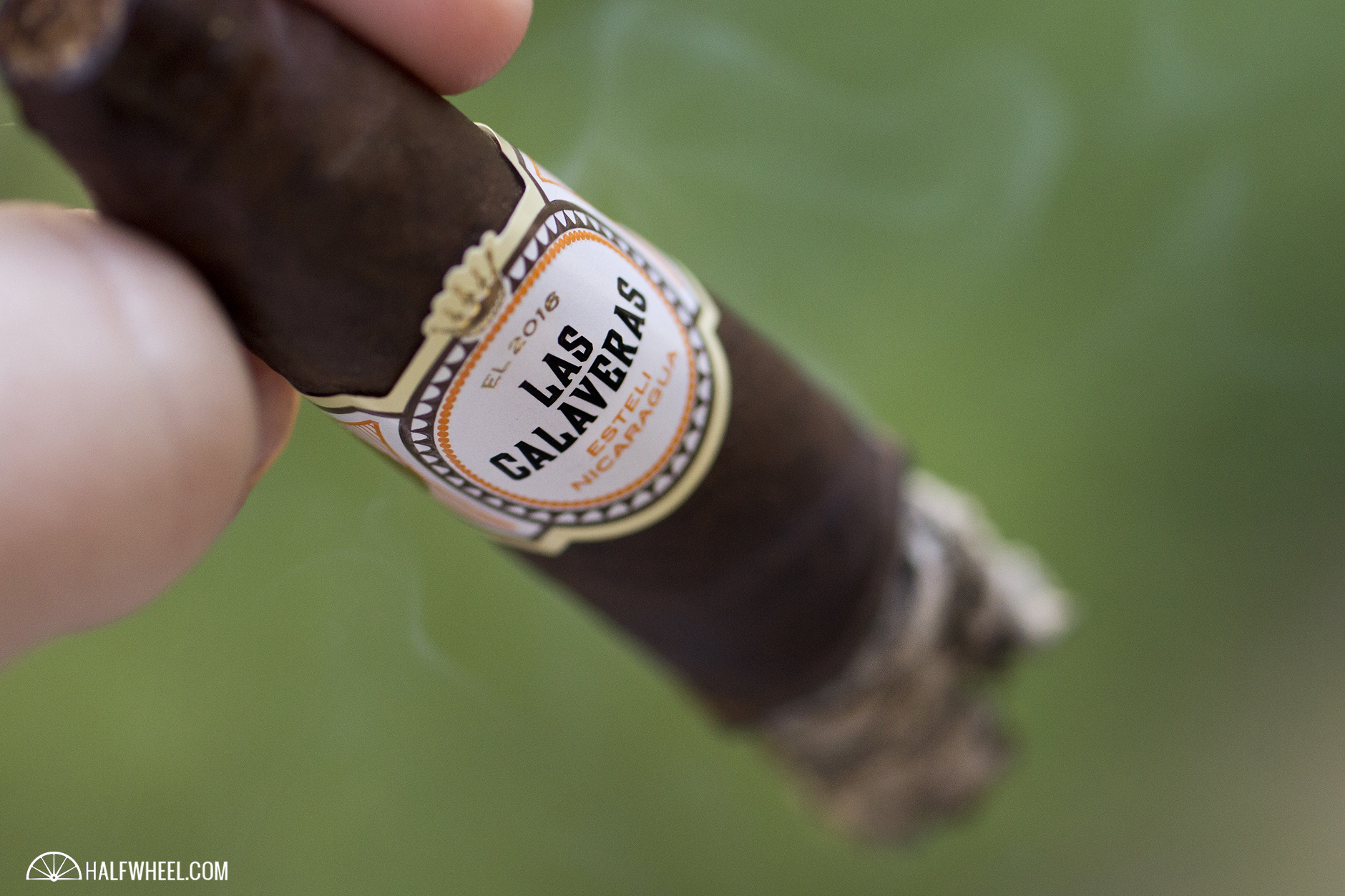 The 2016 installment of the Las Calaveras still hasn’t gone through much a change from where it started, but it is certainly in a better place thanks to the pepper softening a bit and the harshness getting subdued. The third sample takes on a bit of a meaty flavor and texture as the smoke becomes much chewier than it had earlier and as long as the cigar stays burning, offers the best flavor of the three samples. I mention that because both of the first two samples I smoked needed relights in this section, while the third was fine, even without dryboxing it. The nicotine strength from the Las Calaveras begins to kick in with just about two inches left, leaving a mark in the upper chest, which is also where the cigar shows its first sign of burn issues and merits a full relight. 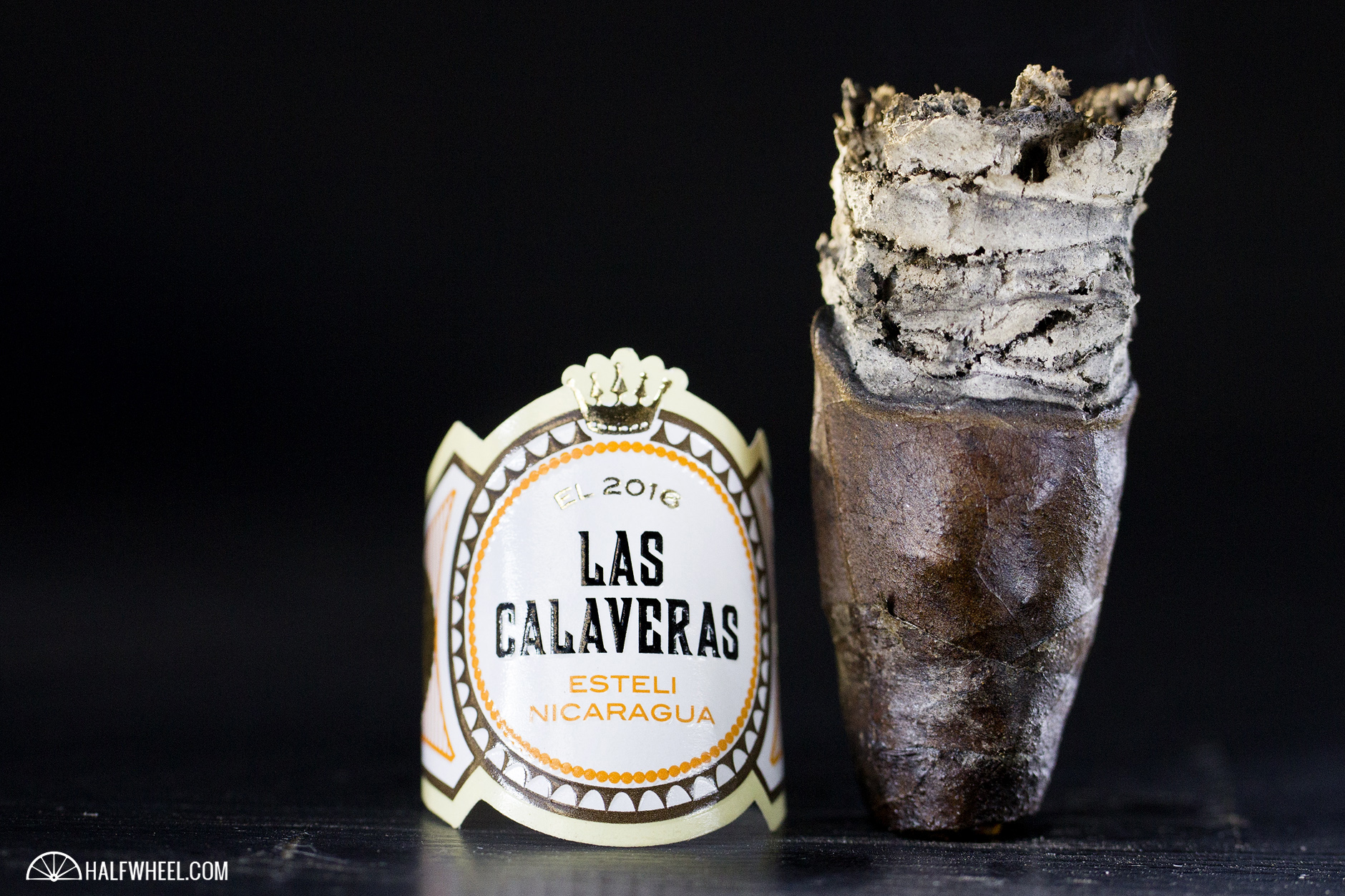 While I’m not shy or averse to strong, peppery cigars, they really have to be balanced and aged properly for me to enjoy them, and the first two samples of the Las Calaveras Edición Limitada 2016 didn’t seem to be that way. The third was a saving grace, as its slightly milder profile and lack of harshness showed the complexity that the cigar has to offer, something that will hopefully will come to every stick produced in short order. The 2016 doesn’t quite hit the high mark set by the 2014 version, but it still shows a ton of promise once it rids itself of the harshness that plagued two of the samples I smoked.