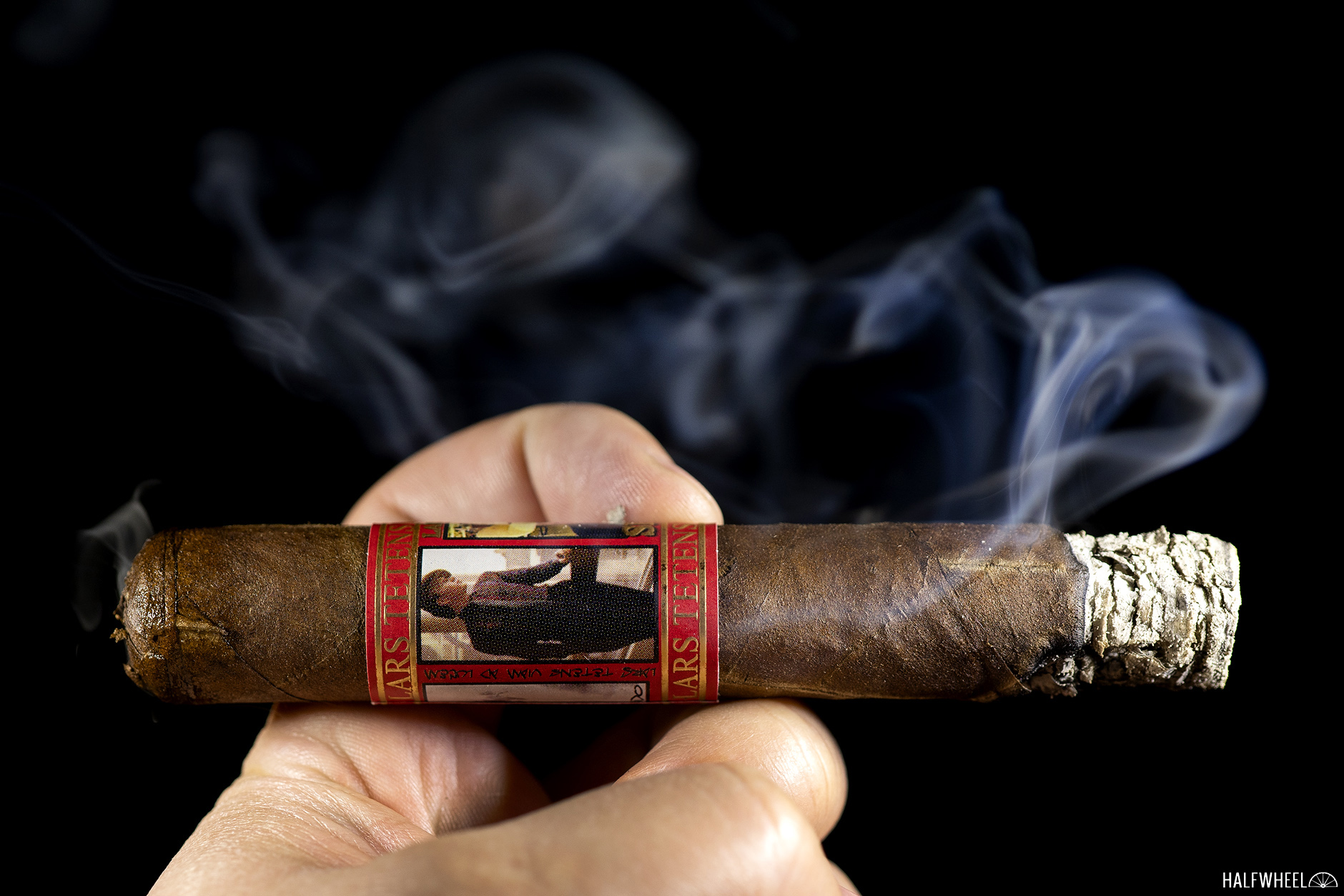 Outside of a cigar company announcing it was for sale, there wasn’t a singular announcement in 2019 that generated quite the buzz like the reintroduction of Lars Tetens.

In an industry full of big personalities, there might not be one bigger than Lars. Lars Tetens is, and has seemingly always been, a lot of different things: a person, a cigar brand, a musician, a fashion brand and now CBD and hot sauce manufacturer, in addition to a line of seasonings.

In the 1990s, he was one of the first to create infused cigars, though the preferred term in his case is conditioned. Those cigars gained popularity around the cigar boom that took place. For a number of reasons, the infused cigar company that everyone remembers from the cigar boom is Drew Estate.

Unlike a lot of companies from the cigar boom, Lars never went away. His distribution shrunk and I can’t remember the last time I saw a Lars Tetens cigar on a shelf, but every once in awhile I’d check on his website or see a retailer—particularly in the upstate New York area—advertising his cigars.

That all changed this spring when Alec Bradley announced that it had formed a new partnership with Lars Tetens. Alan Rubin, Alec Bradley’s founder, announced that he had purchased the rights to the brands through a new company called World 180, of which Tetens is also a part. Alec Bradley would then be responsible for sales and distribution.

The company said that it would return to national distribution with seven different brands, each made by Jesus Fuego in Estelí, Nicaragua. Not a ton was explained about each particular line, including the tobacco varietals, but the understanding is that each cigar is conditioned using a process that Lars Tetens developed in the 1990s. Some of those cigars are sweet-tipped, but not all of them.

I decided that halfwheel should review two Lars Tetens lines. One of those was obvious: Lars Tetens Grass because the two vitolas in the line are priced at $45 and $50, which seemed like an interesting question to answer.

The other line was Serie D, which I chose because I figured if any of the cigars weren’t infused, it might be Serie D. Also, because none of the tobaccos were disclosed, it seemed like it might not really matter which of the seven we choose.

Patrick’s notes from his coverage of Lars Tetens at the IPCPR Convention & Trade Show show just how thin the descriptions of some of the lines are:

All of the Lars Tetens packaging features bands with four panels and typically four pictures, oftentimes of Lars himself. 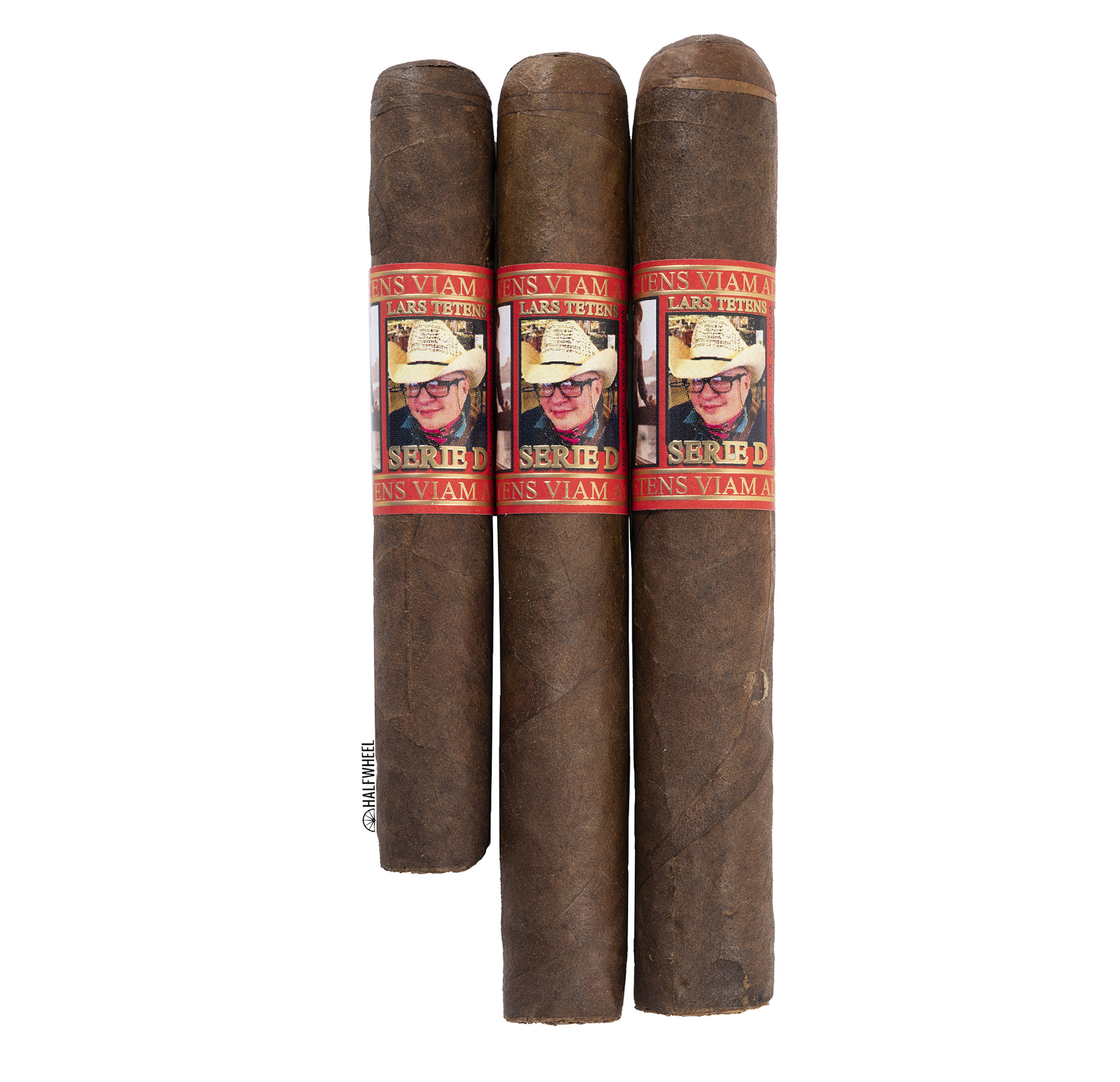 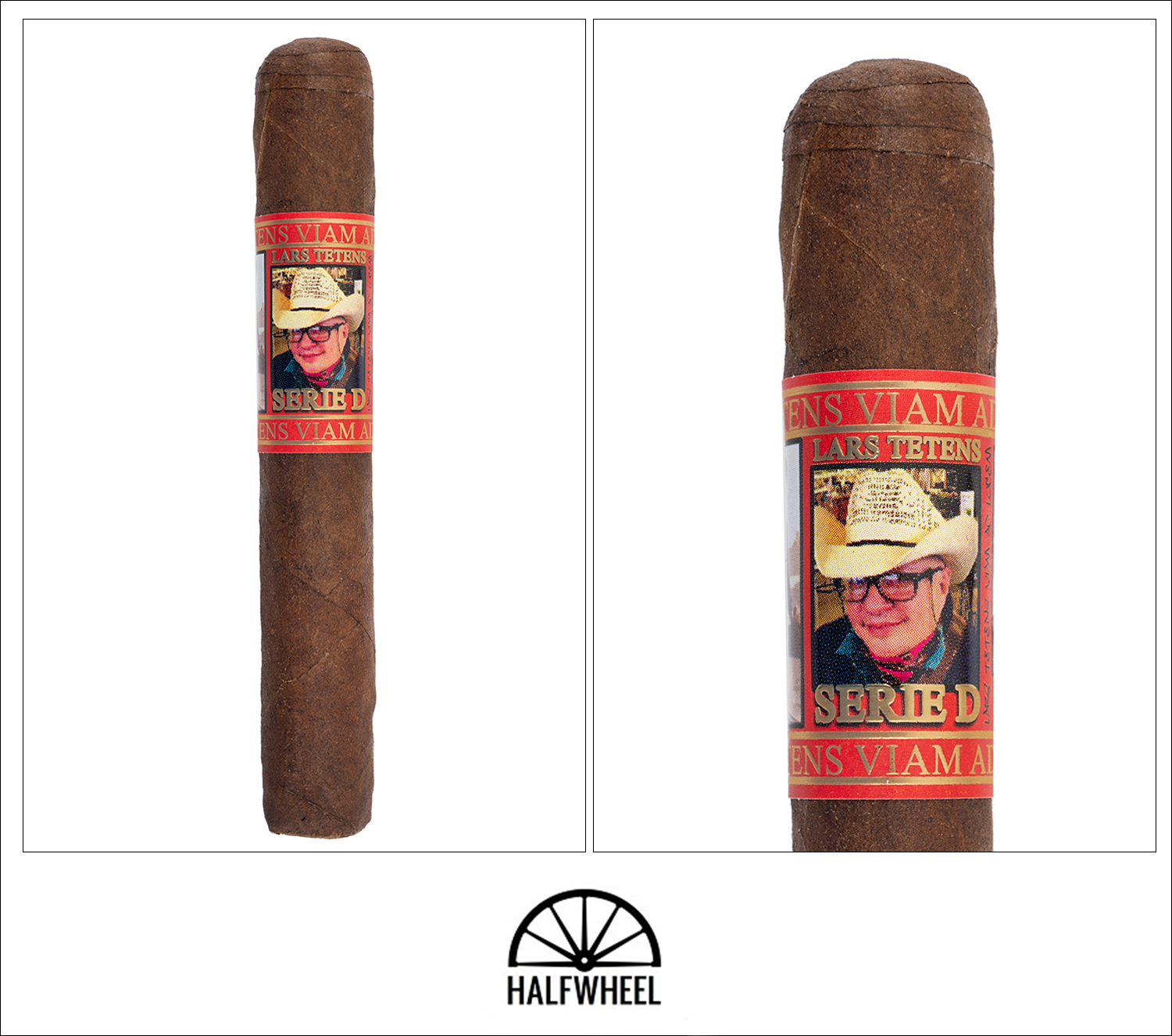 There’s no way to confuse a Lars Tetens cigar with any other brand. His packaging designs are something I cannot recall any other cigar company using and just in case you weren’t sure, the main image of the four is a picture of a current-day Lars. Similarly, I’ve smoked a lot of cigars and I cannot recall anything smelling quite like this. There’s an extremely heavy dose of lemon, like an overly intense car air freshener, and then something that seems like a bad fraternity punch based on Sunny D. As far as normal cigar aromas, there’s a bit of sweet chocolate on the back end. The other part that’s so different here is that the intensity of the flavor is extreme, far more intense than a normal flavored cigar, though again, the word here is conditioned. The foot has more of the Sunny D-like citrus along with some blubbery jelly and an artificial grapefruit. Once I cut the cigar, I’m a bit surprised that the cold draw is almost normal. There’s some pasta and restrained versions of the blueberry and Sunny D-like sensations, but it’s nothing quite like the aroma.

After all that, the Serie D starts with just some earthiness. There’s some of that artificial blueberry on the back end but it’s more or less just an earthy profile with some bizarre sweetness. If I were to judge just by the mouth flavor, I’d have my suspicions that this is infused, but it’s not obvious. There’s a weird sensation where the mouth feels a bit dry because my nose is getting hit with heavy doses of sweet smells from the wrapper once I put the cigar in my mouth. Outside of that artificial blueberry, there’s nothing obviously artificial. The main mouth flavor is earthy with soggy popcorn, burnt coffee and some herbal flavors. The finish is relatively clean with creaminess and the popcorn shining through. Retrohales have a weird combination of artificial sugary fruits, coffee and sweet chocolate, sort of what I imagine a Zombie Frappuccino would taste like, though I’ve never had one. Flavor is medium-full, body is fine and strength is medium-plus. Construction-wise, the first third of the Serie D is great with a nice smoke production and easy draw.

Right around the halfway mark, the Serie D’s flavor is getting a bit too clawing for me. I have a glass of water next to me, but as I do with reviews, I avoid drinking it unless I have to, which I don’t. If I wasn’t reviewing this cigar, I’d recommend water, probably sparkling water. At some point it seems like the flavoring picks up a bit more, something that certainly doesn’t help the clawing nature, though I don’t actually think it’s what caused it. The profile is earthy, a bit less chewy than the first third, and that flavored coffee drink seems to have moved itself out of the retrohale and is now into the mouth. Retrohales have popcorn, creaminess and leather, noticeably less intense than the first third. The finish has nuttiness, popcorn and coffee, all of which last well after a minute after the smoke has left my palate. The Lars Tetens is now medium-plus in flavor, albeit stronger on the finish, while body and strength are medium. Construction remains good, though the smoke production seems to have decreased. 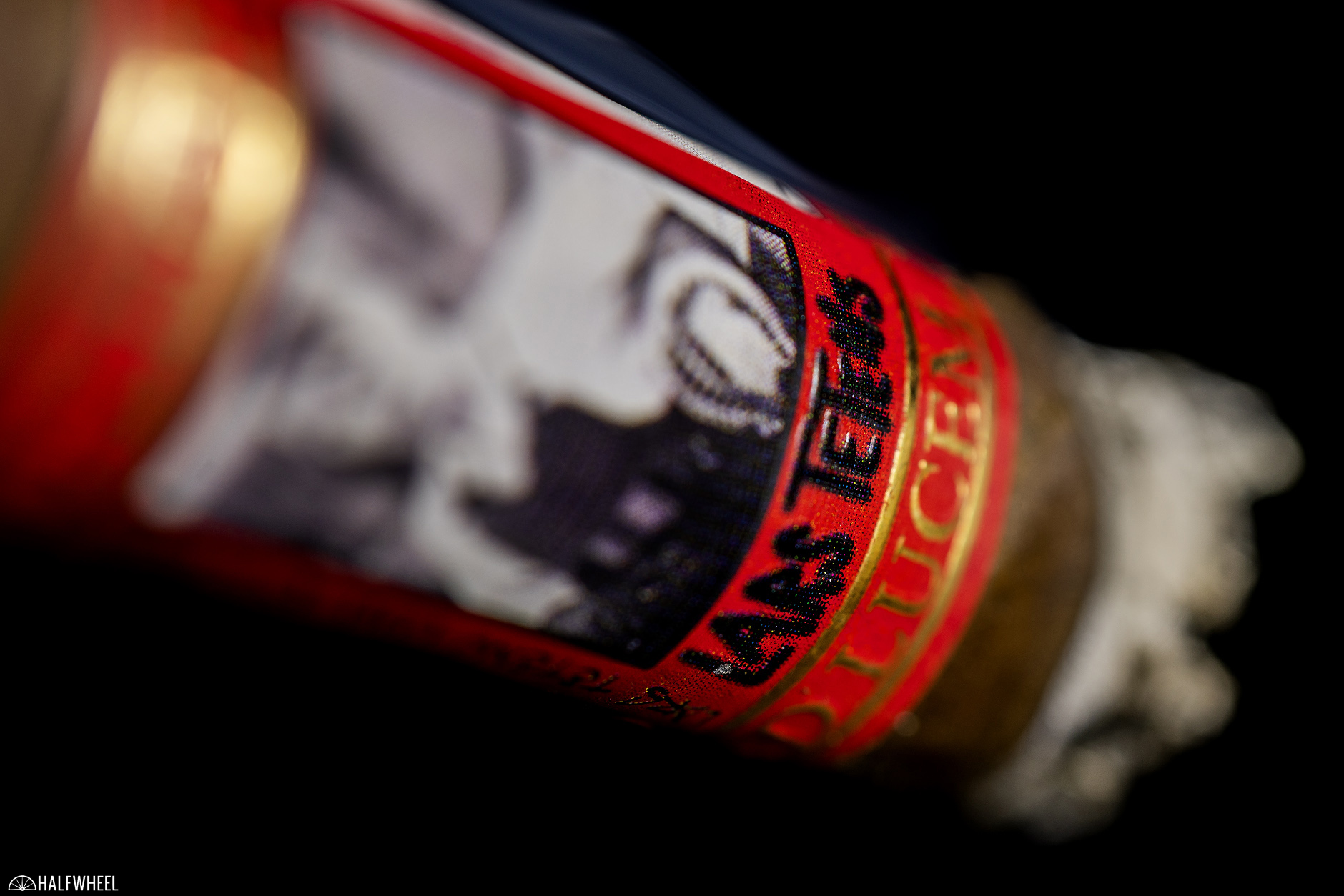 The final third is pretty much like the second third, albeit with a slight drop off in the artificial sweetness. That gives the coffee flavors a bit more room to shine, but the core flavor is still earthy with some of the blueberry sweetness. Retrohales have burnt leaves and a bit of hay, but the dominant flavor is earthiness. Flavor remains medium-plus, body is just under medium and strength is medium. Construction remains great until the end. 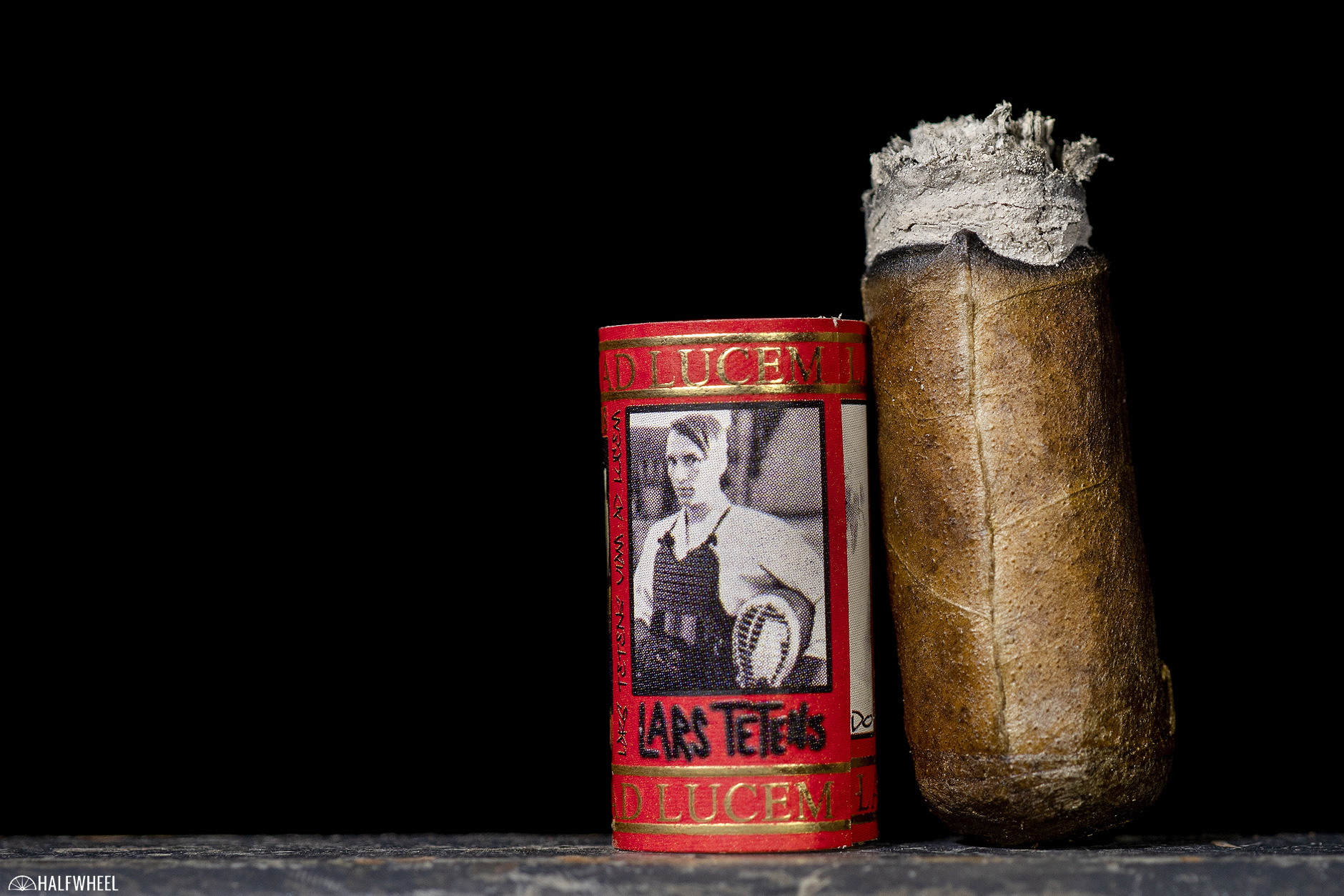 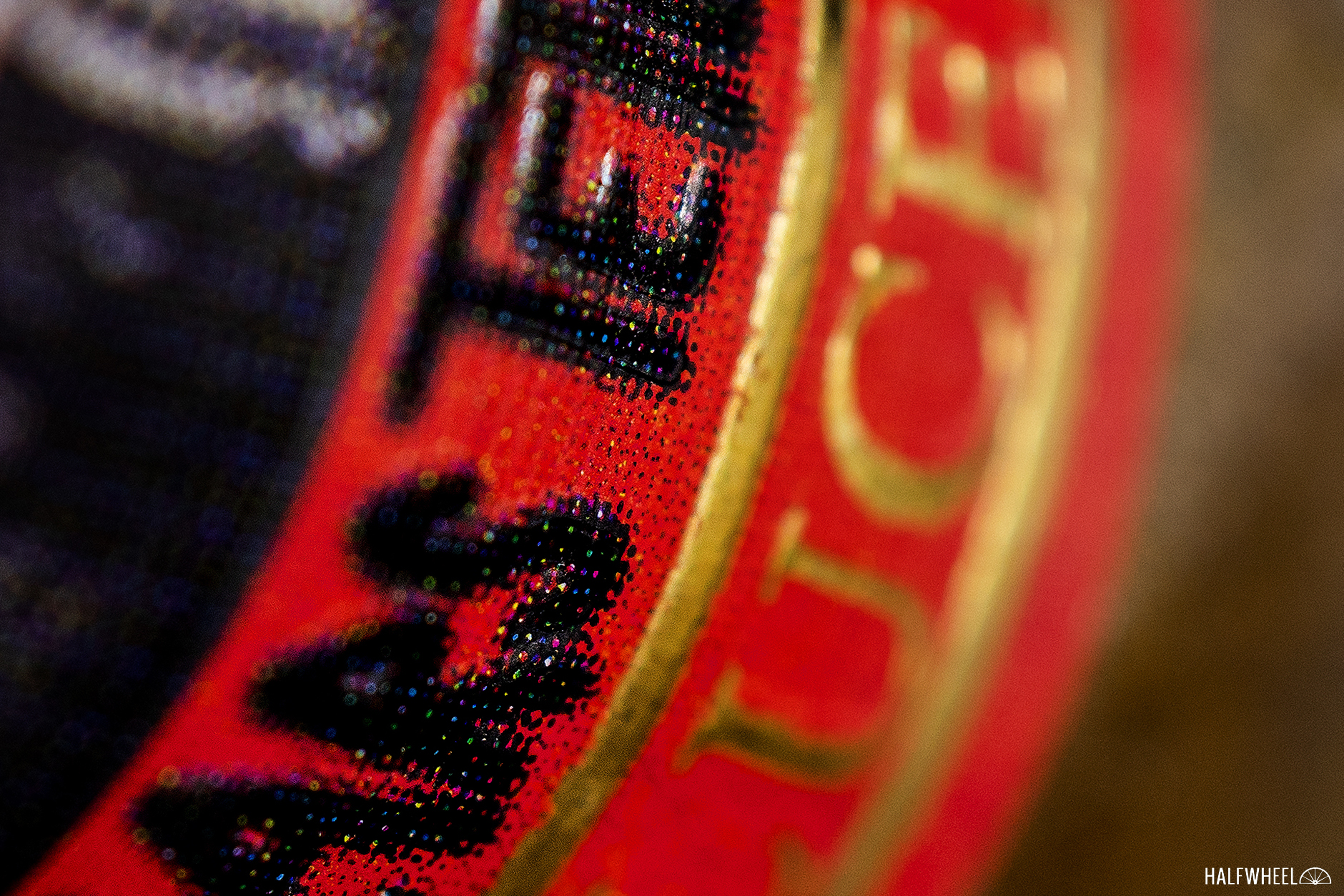 After smoking three Lars Tetens Serie Ds I struggled to find a situation where I’d recommend this cigar. It’s not that it’s bad, rather it’s such a weird combination of experiences. Taking the cigar out of the cellphone would likely scare off most of our readers due to just how strong and sweet the aromas were. Once the cigar was lit, it was probably 90 percent normal cigar, 10 percent infused cigar. But if you want a coffee-flavored cigar, JAVA seems like a better option. If you want a normal cigar with a bit of sweetness, there are a variety of sweet-tipped cigars that are much better suited and likely cheaper. And if you wanted a non-infused cigar, there’s zero chance you’d take this. While I can’t say I’d be excited to smoke another one, the Lars Tetens Serie D wasn’t bad, it was just weird, which is about the only part of this experience that makes sense.